A cool May, continuing a trend 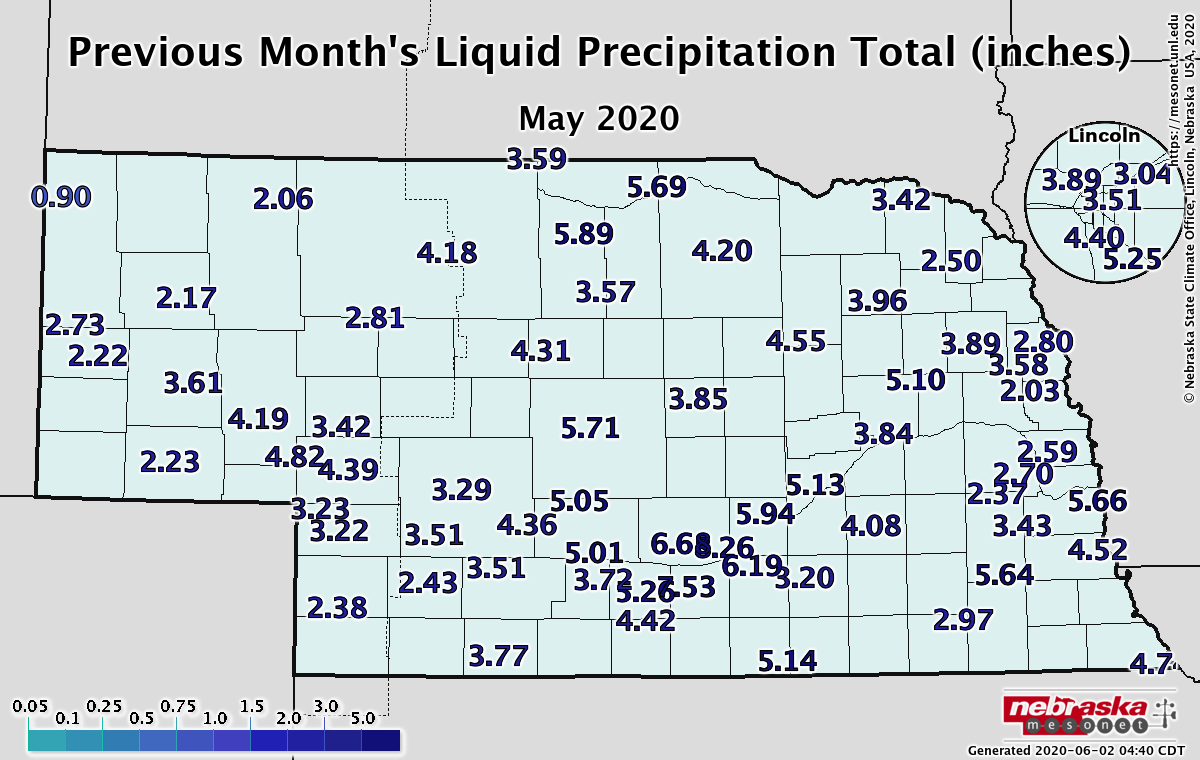 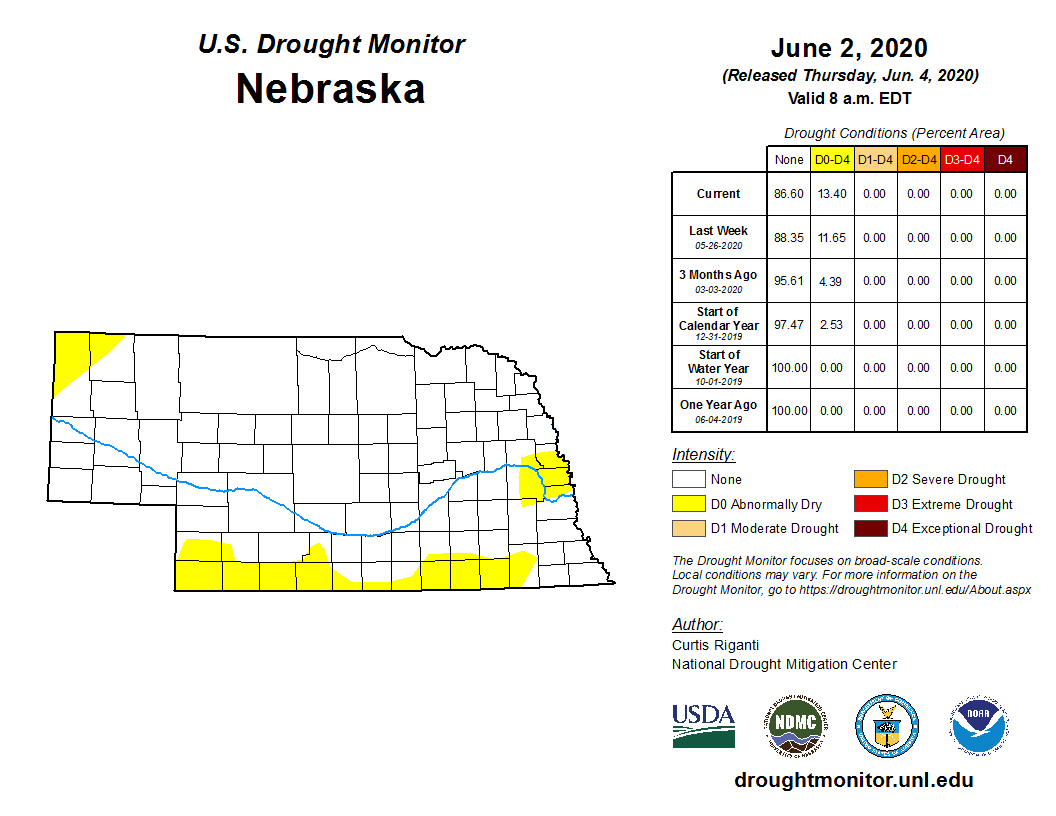 May brought an overall cool, quite cloudy and generally rainy month for much of Nebraska. An exception to plentiful rainfall was found in the northern and western Panhandle. Abnormal dryness, according to the US Drought Monitor, was confined mainly to the southern and southwest portions of the state. Conversely, heavy rainfall in south central and southeastern Nebraska counties caused significant flooding. Stream flows are running above to much above normal for portions of central and eastern Nebraska. Many locations experienced their last hard freeze of the season in early May. The outlook for the first half of June indicates a change to warmer and drier than normal conditions.

The big story for precipitation was heavy rainfall in south central Nebraska. Locations in Adams, Buffalo, Hall, Howard, Johnson and Webster counties bore the brunt of heavy daily rainfall in the third week of May. An observer near Roseland reported a 24 hour total of 5.10 inches on the 23rd and greater than 4 inches were observed at several locations in southeast and south central Nebraska. On May 22nd, Grand Island set a new daily rainfall record of 1.95 inches. Earlier in the month on the 2nd, Scottsbluff reported 0.92 inches, a new record for that date. For the monthly total rainfall, precipitation was greatest in the central, south central and southeast at greater than six inches. Conditions were relatively dry in the northern and western panhandle with 1 -1.5inches, the east central and northeast (2.25 to 3 inches for the lowest totals). Statewide, it was 0.26 inches wetter than normal at 3.95 inches.

Crop planting progress and emergence progressed at a rapid pace during the month of May, continuing the trend set in April. Producers have been ahead of the planting schedule all Spring.Weekly Nebraska Agricultural Statistics Service (NASS) reports had Nebraska nearly 7-10 days ahead of the 5-year average for planting and emergence.Even with low temperatures common across the state during the first half of the month, the lack of significant moisture allowed nearly uninterrupted planting progress.It was actually the cooler than normal temperatures that stretched out planting during early May, not moisture events. The worst of the cold was recorded during May 8-12, when temperatures averaged 8-16°F below normal and frost/freeze conditions were observed across Northwest Nebraska.Extension educator reports indicate little yield loss was expected due to the crop being behind schedule.

The lack of widespread severe weather during the month (3 tornado, 25 hail, 28 high wind reports) is a reflection of both cooler than normal temperatures and the lack of significant storm activity.Dryness issues during the first 3 weeks of the month had Extension educators concerned about pre-herbicide applications losing their effectiveness. Field visits revealed many escapees and field assessments were strongly recommended to make sure a second herbicide pass was warranted.These same dryness issues also resulted in a large expansion of abnormally dry conditions into south central, east central, and southeast Nebraska on the May 19th U.S. Drought Monitor.

During the final 10 days of the month, a more active pattern developed as two major storm systems crossed the country. The system that brought cold weather and freezing conditions to the state formed a cutoff upper air low over the eastern corn belt. Western Nebraska was under the influence of high pressure aloft and experienced abundant sunshine. A low in the eastern corn belt was so extensive that it spread low level cloudiness into eastern Nebraska for days.

A strong system slowly moved eastward across Nebraska from May 23rd–28th, bringing heavy rainfall to central Nebraska on the 23rd with 2-4 inches common in the Kearney and Grand Island area. By the 28th, 3-6 inches of moisture had been reported across south central, east central, and southeastern Nebraska, eliminating the previous two months of precipitation deficits. Some replanting is probable across central Nebraska where the heaviest rainfall occurred, but most areas saw the rain come over several days and soils readily soaked up the moisture with minimal low land flooding.

The Climate Prediction Center’s (CPC) updated outlook for the month of June radically changed from their preliminary release issued May 22nd when they called for above normal temperatures across much of the United States, except for the corn belt, which was in the equal chances of above, below, or normal temperature category. In addition, most of the area from the northern Plains through the southern Plains and points eastward were assigned above normal precipitation tendencies. The May 31 release flipped this trend and now calls for heat and dryness for the central U.S., with the highest probabilities assigned to the central Plains, including Nebraska. 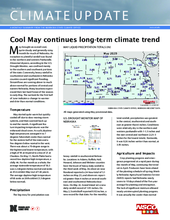