Driest August on Record for Nebraska 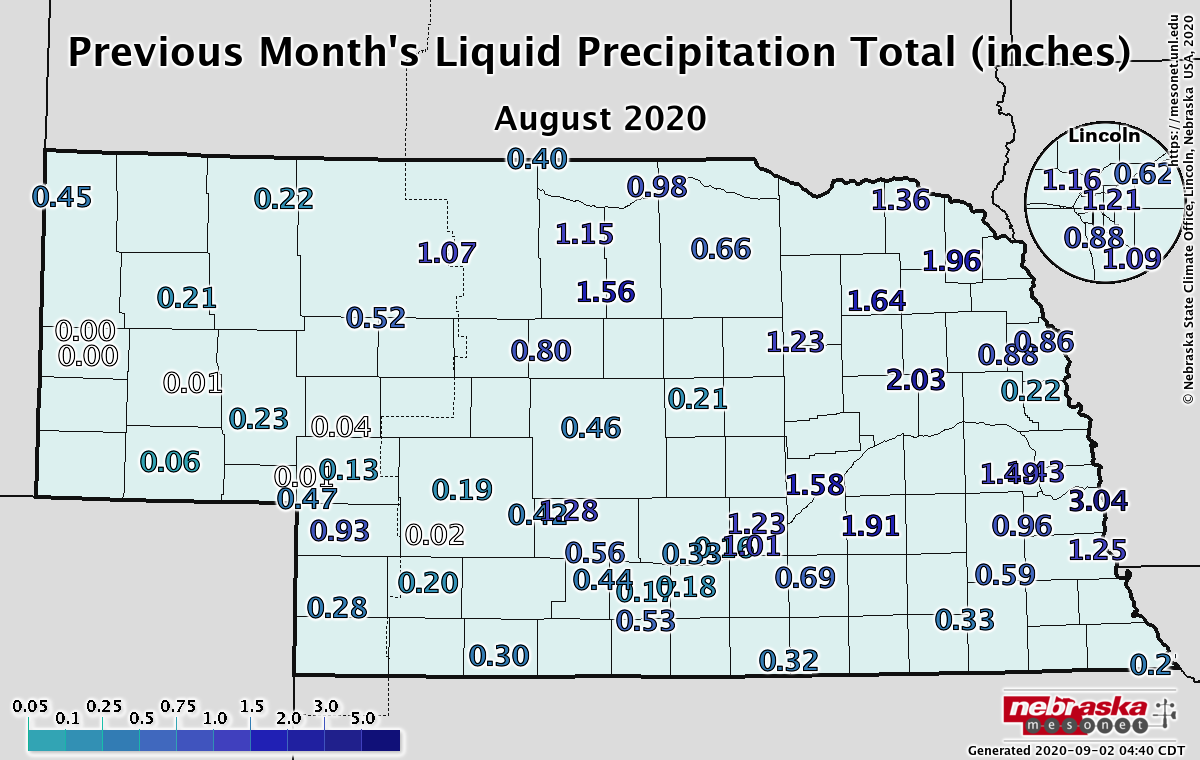 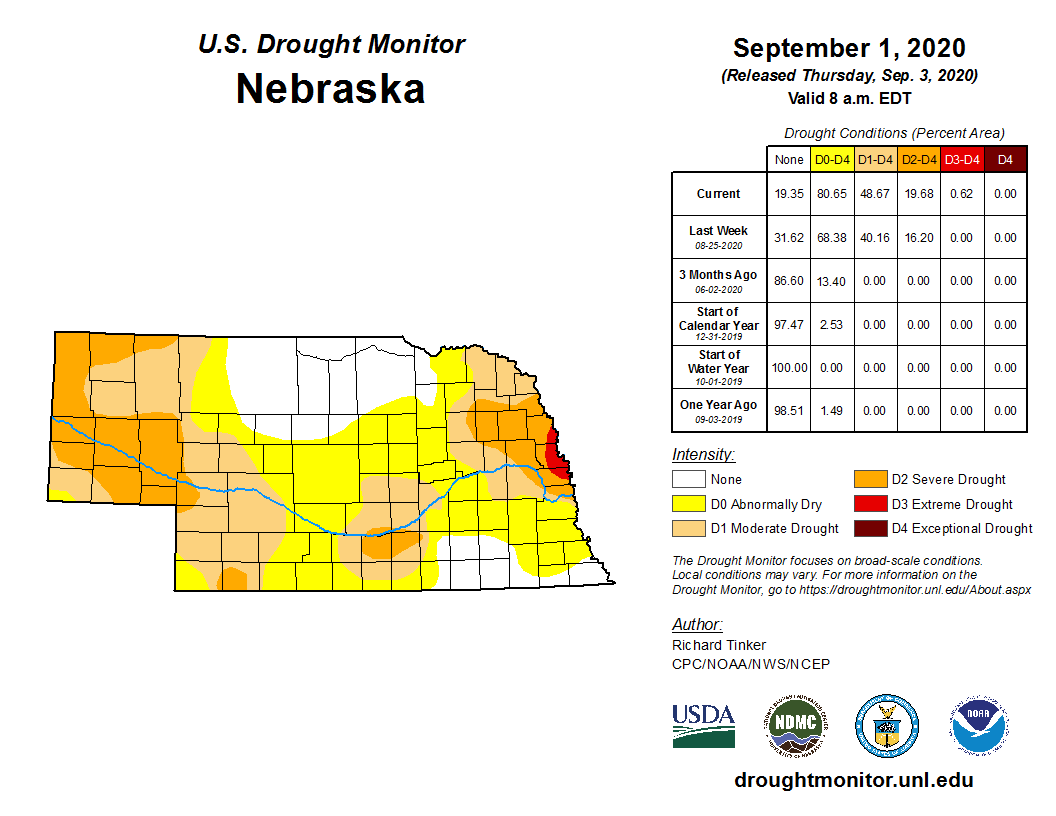 U.S. Drought Monitor depiction at the end of August

U.S. Drought Monitor depiction at the end of August 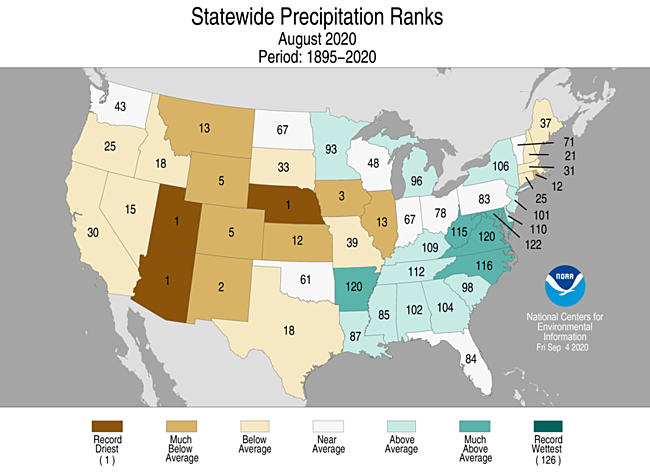 Very dry conditions prevailed this August, rounding out a generally dry summer. Statewide, precipitation was driest on record, going back to 1895. Temperatures were mostly warmer than normal with triple digit heat reported around Nebraska. Dryness and drought conditions intensified with the lack of rainfall and heat and now covers 80% of the state. Impacts are being felt for rangeland, pastures and crop conditions and decreasing soil moisture reserves. There were six tornados reported during August and 103 hail reports. A total of 49 high wind events were reported and thankfully Nebraska missed out on severe impacts of the August 10th derecho that hit Iowa most significantly.

In a mostly warmer than normal month across Nebraska (particularly during the third week), several daily high temperature records were broken. Valentine hit 105°F on the 25th (which was the statewide high), Scottsbluff reached 104°F on the 7th and 102°F on the 25th and Alliance also set a new record for the 25th with 103°F. The panhandle had at least two weeks’ worth of temperatures at or above 95°F and three weeks with the high above 90°F. In the east, highs were 90°F or above for about 10 days during the month. We were not without cold temperatures as locations in the Panhandle dipped into the 30s at the end of the month. The statewide average temperature of 74.2°F was 1.9° warmer than normal.

Crop ratings at the beginning of August marked the high point for the month according to crop progress information provided by Nebraska Agricultural Statistics Service (NASS). Crop conditions at the beginning of the month were aided by a cool down during the second half of July and widespread precipitation, even across the most drought-impacted regions of the state.

The late July trend carried over into the first few days of August and were reflected in the first national crop projection of the growing season by the United States Department of Agricultural. Nebraska was forecasted to see record corn and soybean production and NASS statistics appeared to support these projections. The August 2nd assessment found that 77% of the corn and 79% of the soybeans were in the good to excellent condition categories. The following three weeks brought above normal temperatures and below normal precipitation. The most intense heat lasted 8-10 days (location dependent) with high temperatures exceeding 90°F. Across western Nebraska, isolated locations reported 1-3 days of high temperatures exceeding 100°F. The heat and dryness resulted in 3 consecutive weeks where crop ratings declined at least 2 percentage points and as high as 7 percentage points from the prior week’s release. As of August 30th, NASS survey data indicated 64% of the corn and 66% of the soybean crop was rated good to excellent. This represents a decline of 15 percentage points for corn and 13 percentage points for soybeans from the beginning of August. Pastures rated as very poor to poor increased from 9% on August 2nd to 47% on August 30th. Top soil and subsoil ratings in the short to very short classification increased to 70% and 62%, respectively. On August 2nd, these same ratings stood at 37% for top soil and 36% for sub-soils.

The September temperature and precipitation outlooks issued by the CPC show dramatic differences between their August 20th preliminary outlook and their official September outlook issued August 31. The CPC has shifted the warmth in the central U.S. westward and replaced it with below normal temperatures. Below normal precipitation across the southern Rockies and Plains was shifted to the northern Rockies and Plains region. The biggest influence on this revision was the development of an upper air trough positioned over south central Canada at the end of August that is forecasted to impact the central United States and Great Lakes region for the first 10 days of the September. Extremely cold air is projected to move into the region September 7-10, with frost/freeze conditions possible across the upper Midwest and northern Plains. By mid-month the Global Forecast System (GFS) model indicates a large upper air trough will build into the western third of the U.S. then slowly moves it east-northeast. This will bring southerly winds to the central Plains, leading to above normal temperatures. If this trough lifts northeast, then warm and dry conditions will prevail for much of the remainder of the month. If the trough moves in an easterly direction, precipitation odds would increase, but would be followed by another strong cool down the third full week of the month. Looking further into the future, the CPC released its ENSO update in early August and continued to increase their probability of La Nina development to 60-65% compared to 50-55% in their July update. The development of La Nina conditions is reflected in CPC’s seasonal outlooks which call for dry and warm conditions this fall and winter across the southern Plains. For the northern Plains, below normal temperatures are beginning to appear in the winter outlook for the extreme northern Plains. 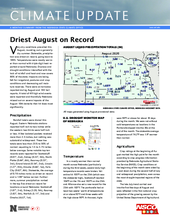