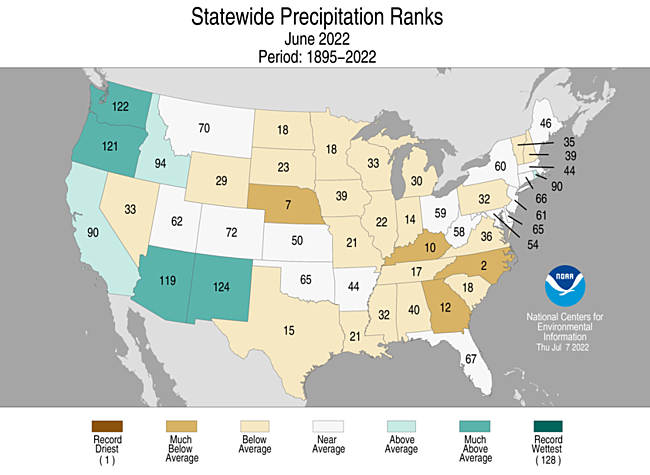 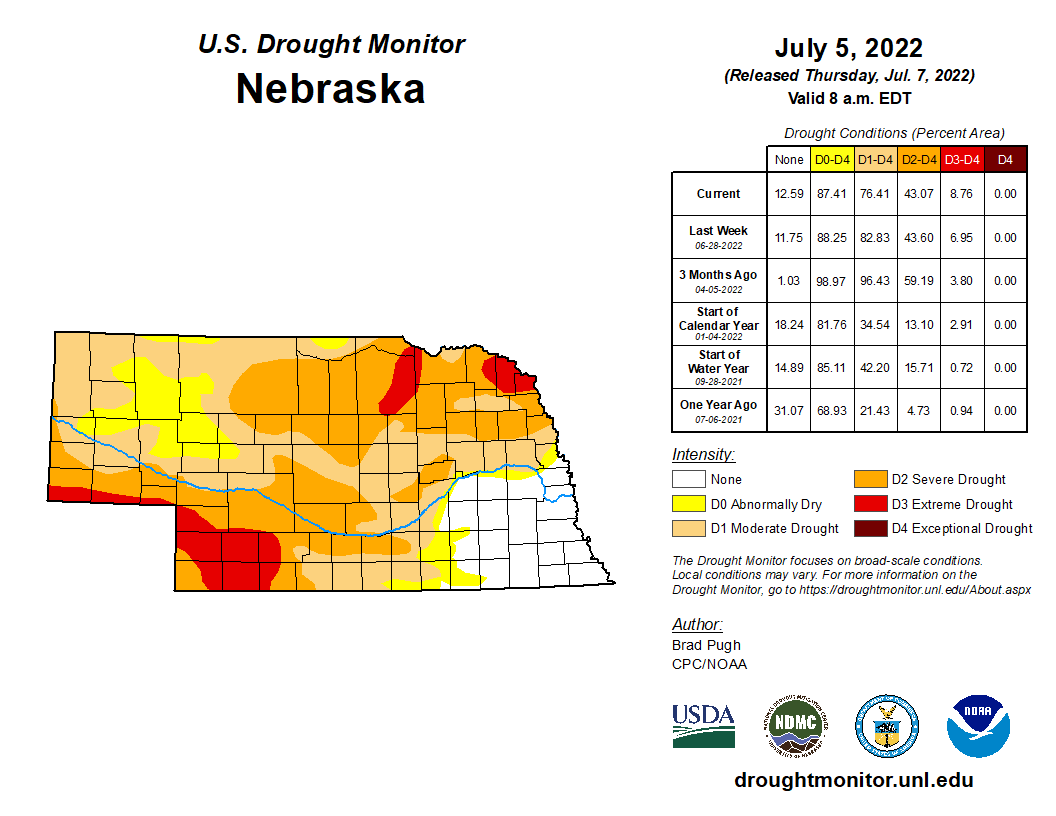 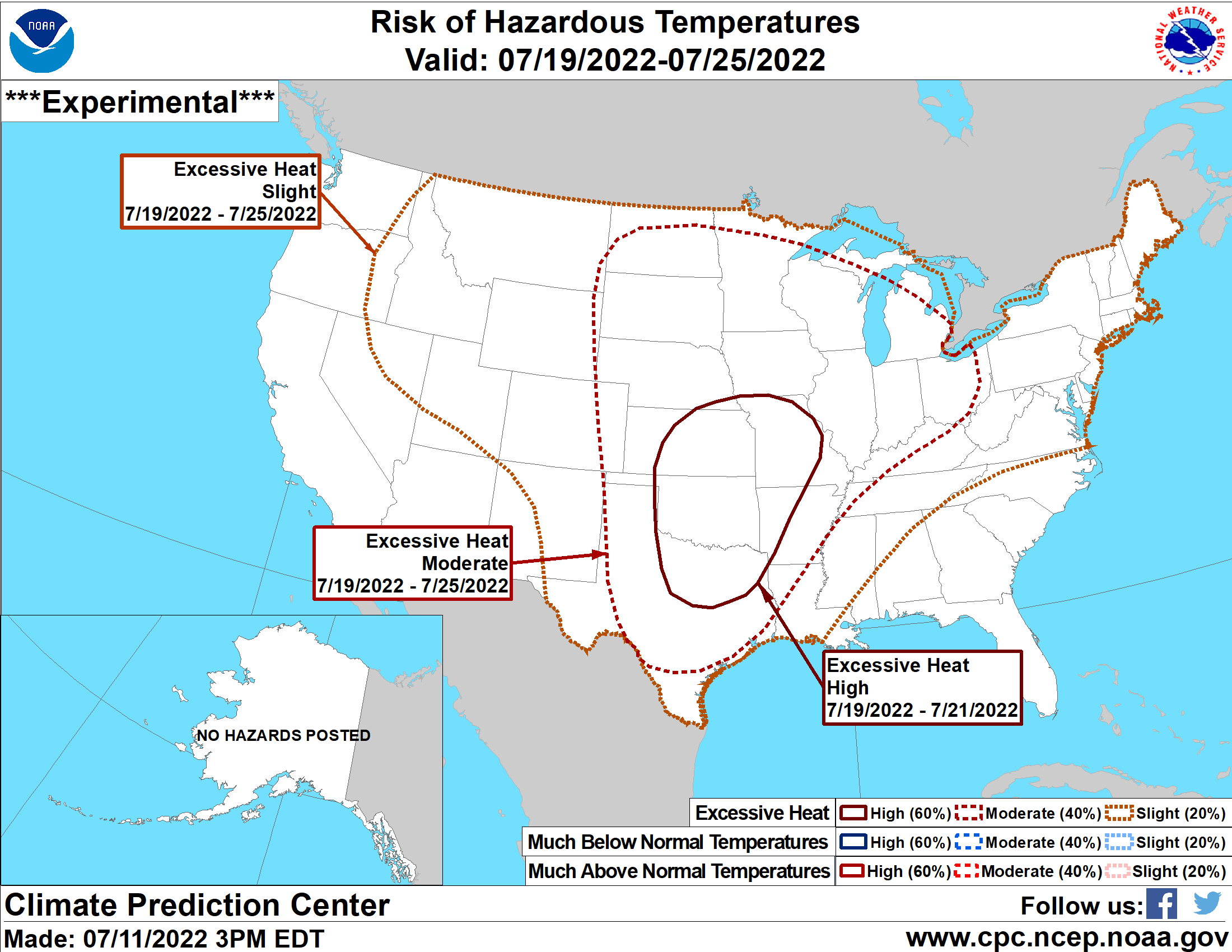 Risk of excessive heat for the period July 19th - 25th, according to the Climate Prediction center

Risk of excessive heat for the period July 19th - 25th, according to the Climate Prediction center

Nebraska experienced it’s 7th driest June on record this year and by month’s end, drought covered 76% of the state. Severe weather was plentiful, particularly during the first two weeks, as hail and high wind events dominated the impacts. Temperatures averaged slightly above normal. The year to date average statewide temperature is in the above average category, while precipitation is seventh driest on record for the January through June period. Going forward in the short term, as we enter reproductive phases for crops during July, timely rains will be needed. A widespread heat event in the coming week could potentially have significant implications for human, livestock and crop stresses.

Precipitation was greatest in southeast Nebraska with monthly totals greater than 5 inches in places such as Auburn, Beatrice, Nebraska City, York and portions of Lincoln and Omaha. Elsewhere, totals were anywhere from a quarter inch in portions of the Panhandle and north central Nebraska to an inch and three quarters. June is typically one of the wettest months of the year across Nebraska (along with May). The statewide average total this year was 1.81 inches, which is about two inches less than normal and ranks as seventh driest on record. This makes the third straight year of below normal June rainfall totals and over the past 30 years, we’ve experienced a drying trend over time. Drought conditions at the start of July, according to the U.S. Drought Monitor, covered three quarters of Nebraska. The driest areas continue to be in the northeast and southwest with pockets of extreme drought (D3). Drought-free conditions remain in Nebraska’s southeastern counties.

Temperatures averaged warmer than normal overall for June. The statewide mean was 70.8°F, which is 1.7°F above average. For the past three decades, Nebraska has gotten hotter in June, with an increase of nearly 4°F in the average monthly temperatures. High temperatures have warmed twice as much as nighttime lows. Nearly everywhere in the state reached triple digits during the month. Southwest Nebraska had the warmest conditions topping out at 109°F and several locations had five or greater days in which temperatures were above 100°F. A few locations in the Panhandle dipped below freezing in June while temperatures in the 30s occurred in locations aside from the southeast third of the state. There were tied and new daytime high temperatures as well as new nighttime minimum records reported during the month. North Platte (108°F, 13th), Grand Island (minimums of 77°F and 78°F on the 19th and 20th), Hastings (103°F on the 13th and a minimum of 76°F on the 20th), Lincoln (minimums of 78°F, 77°F and 78°F on the 13th, 19th, and 21st), Norfolk (102°F on the 13th and 79°F on the 19th and 20th), and finally Omaha (a minimum of 79°F and a high of 101°F on the 13th, a minimum of 76°F on the 21st). A few low temperature records were also set during June. Norfolk had it’s coldest June temperature since 1935 of 37°F on the 2nd as well as a new daily low of 46°F on the 27th. Lincoln also set a record low on the 2nd of 42°F.

A very active weather pattern developed across the central Plains during the first half of June. Severe weather was reported somewhere within the state 9 of the first 14 days of the month. Widespread severe weather was reported on June 7th when 89 hail and 74 wind reports were issued by storm spotters and June 14th when 71 hail and 43 wind reports were issued. On the 7th, the Nebraska Mesonet station near Alliance reported a 74 mph gust at 9ft height. The minimum criteria for hail reports is 1 inch (quarter size) and 60 miles per hour for wind gusts. Hail damage to crops was significant enough that producers needed to replant crops along 4 distinct storm paths: along and just north of I-80 from Kearney to Lincoln: Broken Bow to Central City, Loup City to Wymore; Bridgeport to just west of McCook. Total storm reports were the following for tornados (11), hail (292) and wind (196).

The winter wheat crop continued to deteriorate through the month across the western half of the state due to the below normal moisture and above normal temperatures, particularly the southern half of the Panhandle region and southwest Nebraska west of a line from North Platte to McCook. Although rainfall improved pasture conditions during the first half of the month, high temperatures consistently in the middle 90’s to low 100’s coupled with below normal moisture the final 15 days of June, led deteriorating pasture conditions. Warm season crops (corn, soybean, sorghum) benefited from above normal temperatures during the second half of the month, which partially offset the planting delay issues that were widespread during the first half of May. As the crops enter their reproductive phases during July, timely rainfall will be required to minimize crop stress and potential yield losses due to the lack of adequate sub-soil moisture reserves that were the result of dry conditions last fall through this spring across northeast, central, south central and southwest Nebraska.