A little bit of everything this May 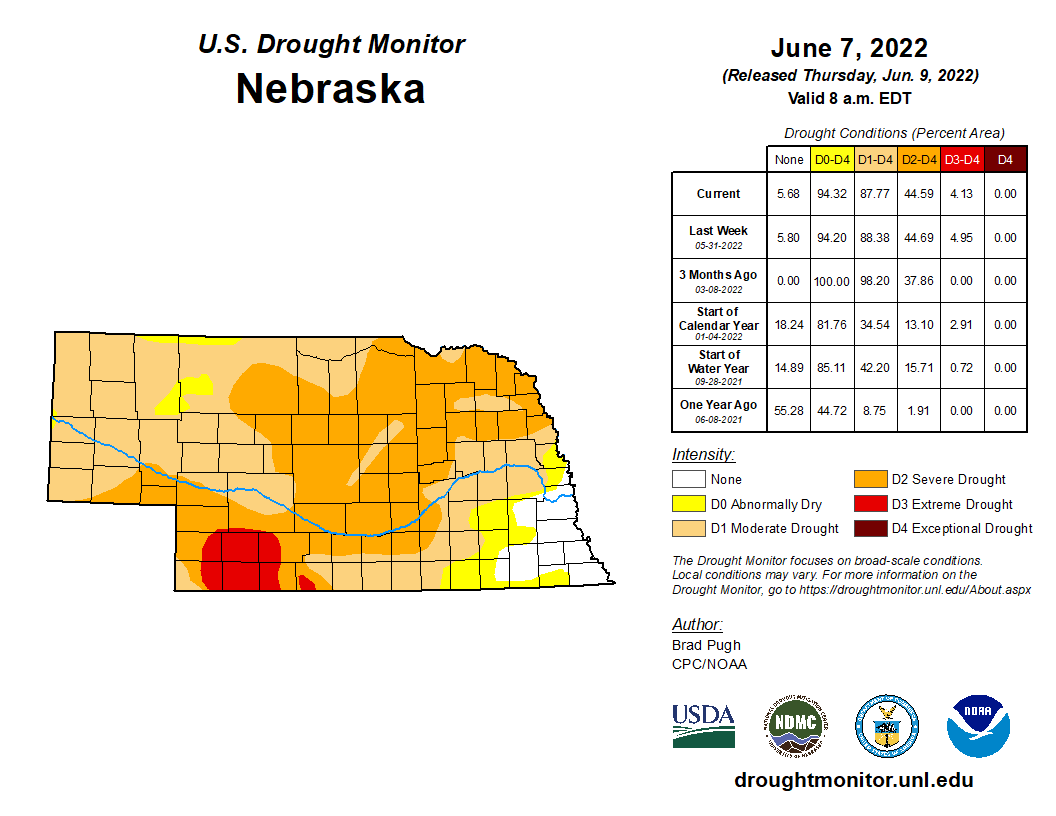 Early June drought conditions, according to the U.S. Drought Monitor

Early June drought conditions, according to the U.S. Drought Monitor 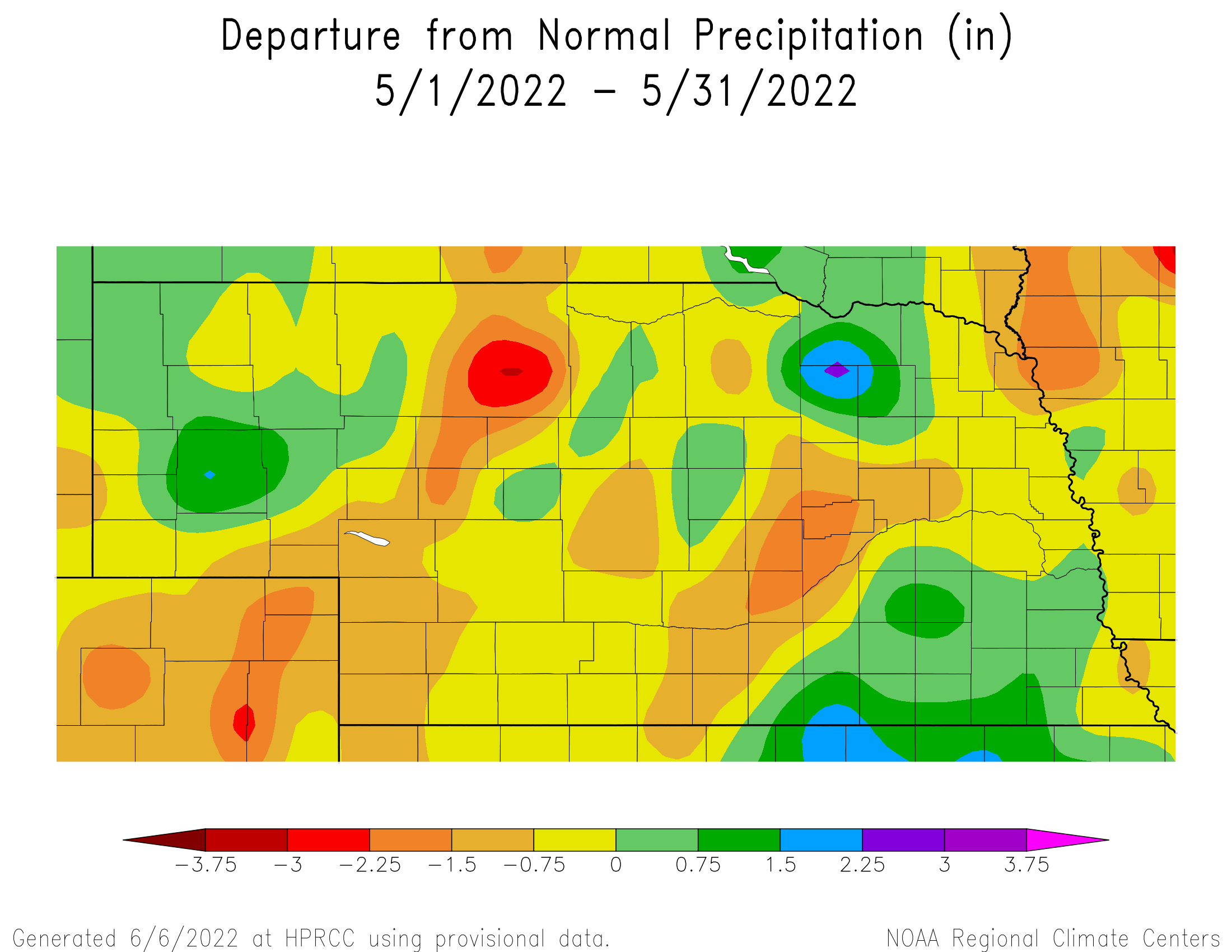 May precipitation departure from normal

May precipitation departure from normal 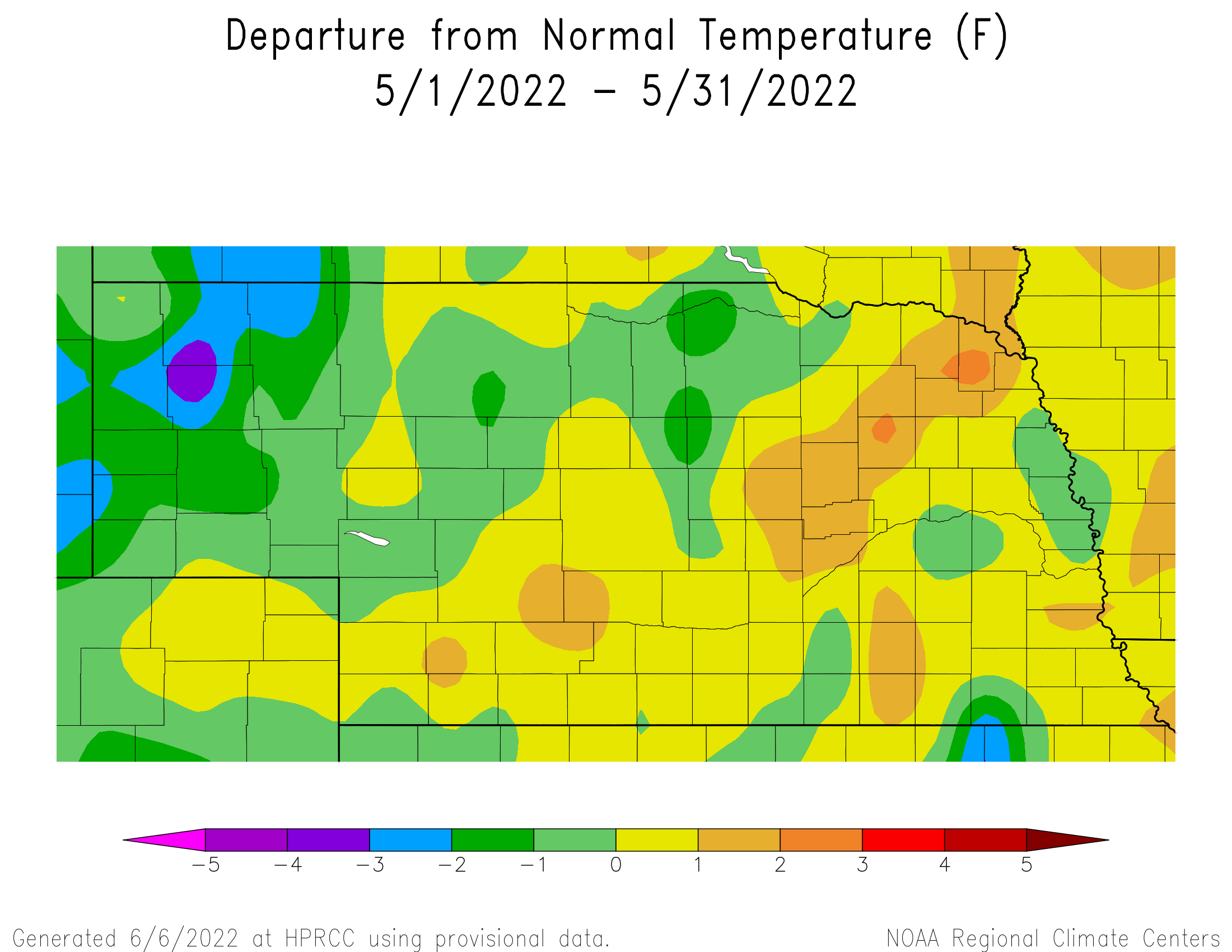 May temperature departure from normal

May temperature departure from normal 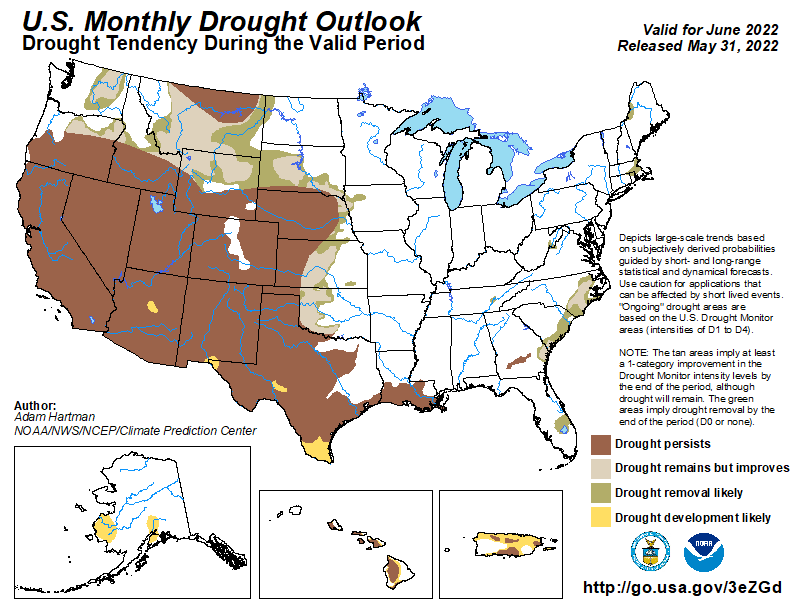 Below freezing conditions and wind chill temperatures in the teens, heat indices in the triple digits, a derecho, dust storms, and heavy rainfall - May brought no shortage of extreme weather to Nebraska. Thankfully, as was predicted in the outlook, drought conditions were reduced around the state due to above average rainfall in some areas. Currently, 88% remains in moderate or worse drought. Straight line winds associated with a derecho swept through portions of Nebraska near mid-month with gusts greater than 75 mph. Temperatures dipped into the teens and twenties in the central and west the third week of May.

May is typically one of Nebraska’s wettest months of the year. This year, the typical May rainfall was exceeded for the southeast, a pocket in the northeast, and much of the Panhandle. Monthly totals were greatest in the southeast and northeast at greater than five inches, and greater than seven in the far southeast. Totals for the western two-thirds of the state were generally in the 2 – 3.5 inch range. Scottsbluff reported a daily rainfall record of 1.10 inches on the 2nd and Grand Island reported a record 1.3 inches on the 3rd along with a record 1.2 inches of snow on this date. The monthly average precipitation was 3.60 inches, which is about normal for May. Over time, May has trended toward wetter conditions in Nebraska in recent decades.

Drought conditions finally began to see some relief around the state. During May, categorical improvements were made to the U.S. Drought Monitor designations for Nebraska. Extreme drought (D3) reduced by more than 50% and severe drought (D2) reduced by 30%. By the end of May, extreme drought remained in the southwest. A swath of severe drought remained from southwest to northeast and surrounding areas in moderate drought. Water year precipitation deficits for these areas are in the five to seven inch range. Southeastern counties are in a drought free category to start June.

The western third of Nebraska was just on the southeast flank of a colder than normal pocket of the U.S. for the month of May. Aside from a few isolated pockets, southern and eastern Nebraska finished the month on the warmer side of normal. Both cold and hot daily temperature records were set across Nebraska. Highs in the 90s set daily records for Grand Island (19th), North Platte (12th), Omaha (May 11th, 12th), Scottsbluff (27th). The low temperature in Omaha didn’t get below 70°F on the 11th, a record high minimum temperature for that date. Similarly, daily low temperature records were set at Lincoln (22nd) and Sidney (21st, 22nd) as well as some record low maximum temperatures of 53°F in Lincoln and 54°F in Hastings on the 25th. The statewide high of 101°F was reported at the Tekamah airport with lows in the teens at high elevations of the Panhandle. The statewide average temperature of 58.5°F is right about normal. Over the last few decades, May has trended toward slightly cooler conditions.

There were several distinct periods of severe weather during the month that led to widespread wind and/or hail damage. The most significant event occurred May 12 when at least 78 wind reports with gusts over 57 mph were issued as the result of severe thunderstorms developing along a strong cold front. At least 8 of these wind gusts reached 80 mph, with the strongest gust reaching 90 mph two miles west of Arcadia. Extension educators indicated pockets of widespread structural damage to buildings and center pivots from central through northeast Nebraska. Additional periods of hail and wind damage occurred 5/16-5/17 and 5/29-5/30 with 34 and 39 storm reports indicated, respectively.

The final CPC June temperature outlook replaces the preliminary outlook which called for a slight to moderate risk of above normal temperatures, with the highest risk assigned to the southern Panhandle and southwest Nebraska. The preliminary CPC June precipitation outlook indicated that below normal moisture was favored, with the highest odds assigned to the western third of the state. The final CPC June precipitation outlook has pushed this area westward toward the Great Basin, likely due in part to the active weather forecast for the first third of June across the northern half of the High Plains region (ND, SD, NE).

Cooler than normal temperatures in early May slowed planting activity, especially across the northern half of the state. Planting activity picked up during the second and third full week of the month, such that, by the final Nebraska Agricultural Statistics Service crop report of the month, planting activity had caught up to the five-year average for corn, soybean and sorghum. Warm season crops are estimated to be 7-10 days behind in their development across the northern third of the state and the panhandle due to cool weather planting delays early in the month.

An unusually strong late spring storm system brought significant snowfall to the front range of Colorado May 20-21 and frost/freeze conditions to Montana, the Dakotas, Minnesota and western Nebraska. Minimum temperatures ranged from the low 20s across the Panhandle and west central Nebraska to the upper 20s to low 30s or the central Platte River valley and eastern two-thirds of the Sandhill region. Extension Educators indicate that freeze damage was most prevalent to the wheat crop across southwest and west central Nebraska, but not as extensive across the Panhandle due to the crop still being in the boot stage. Isolated damage was reported to some corn and soybean acres, primarily in no-till fields with heavy crop residue that were unable to radiate accumulated heat from soil surfaces where the crops had recently emerged. The full extent of damage to wheat, corn and soybean fields is still being assessed, but is not expected to be severe or widespread.