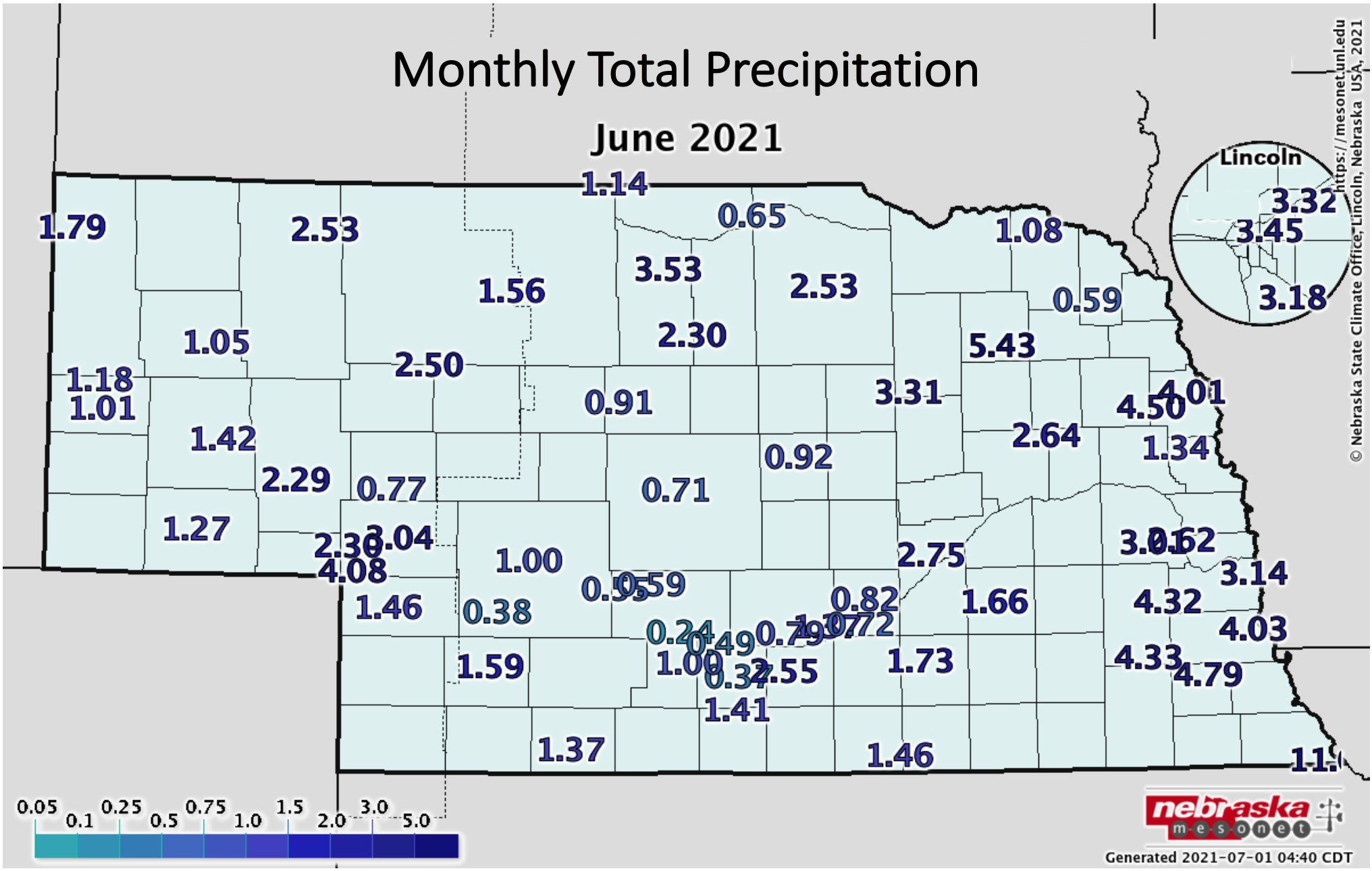 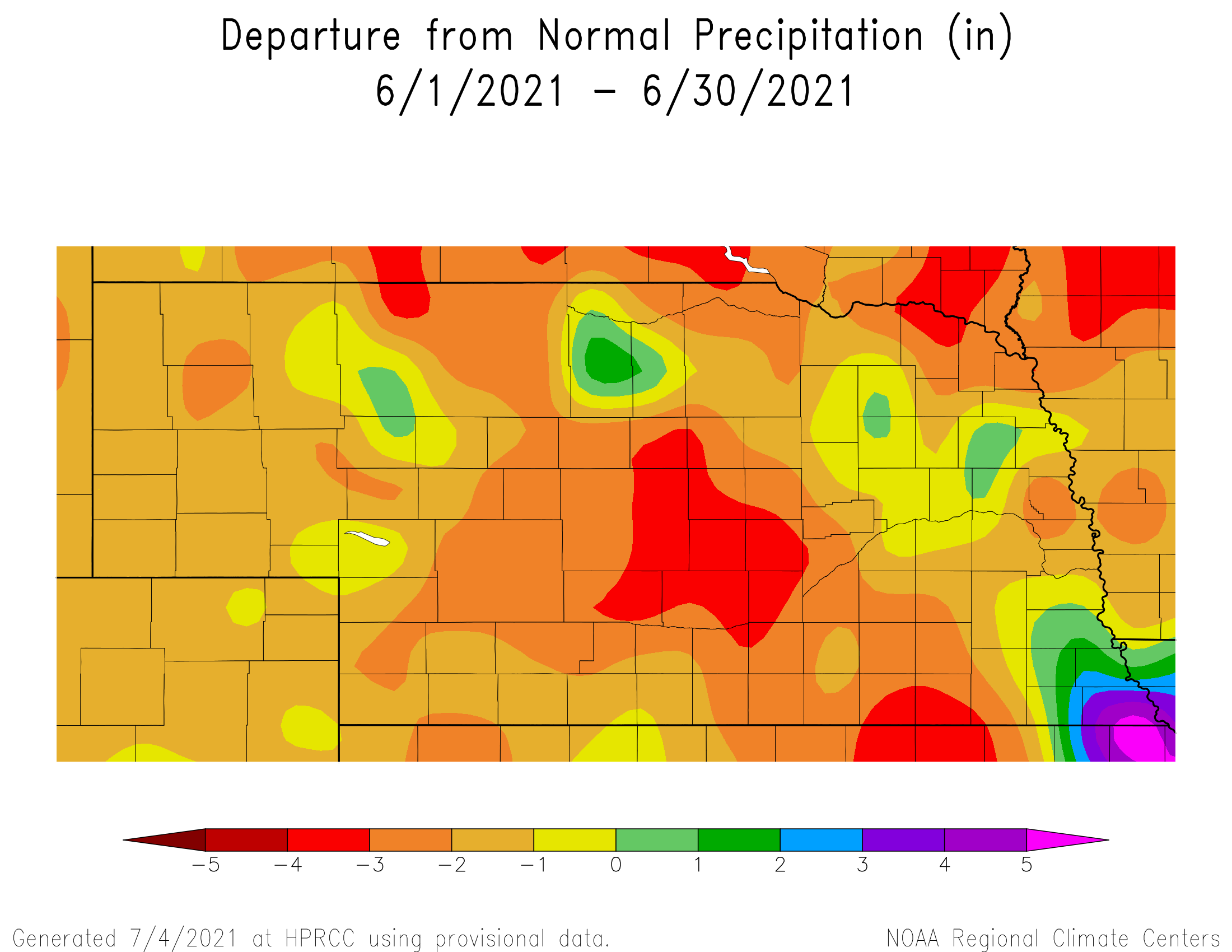 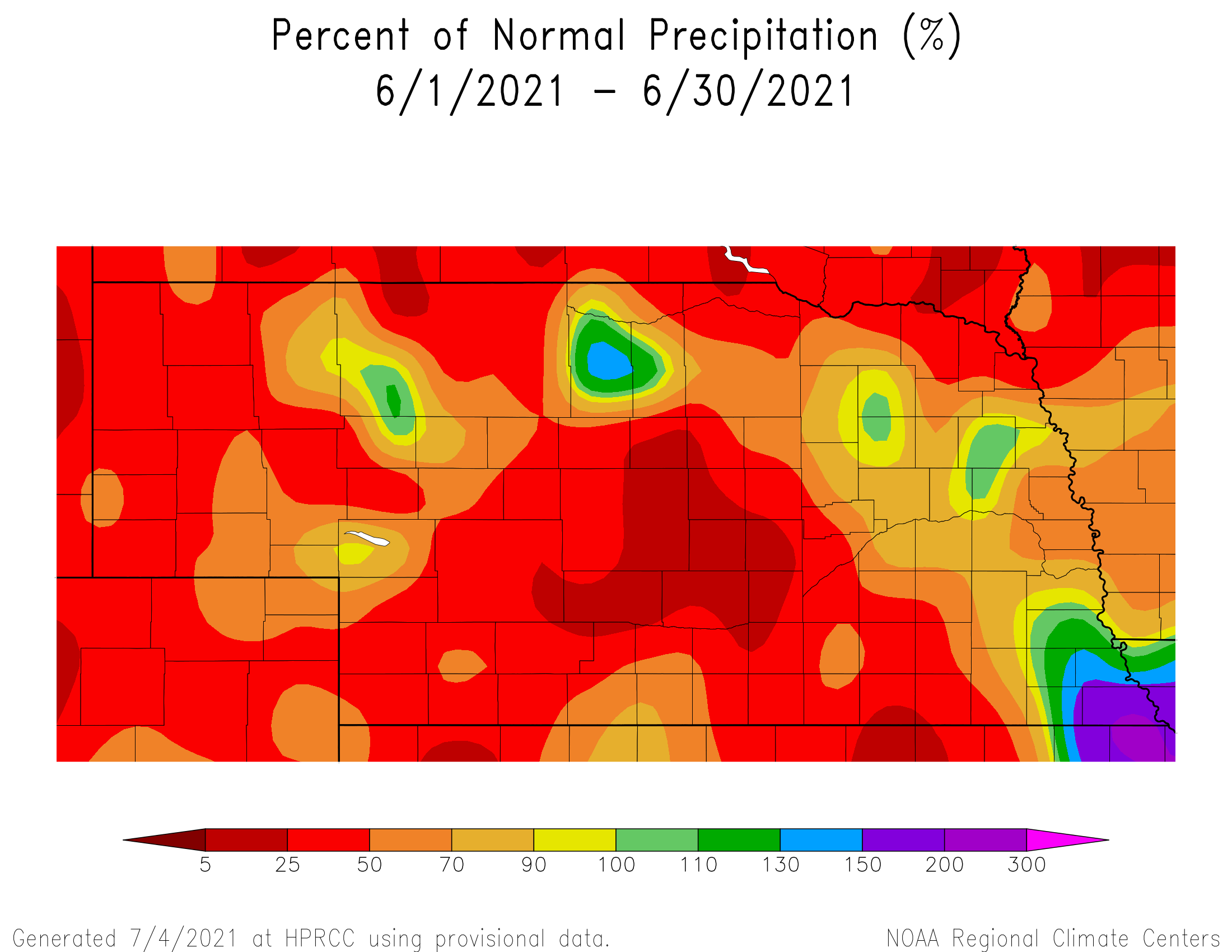 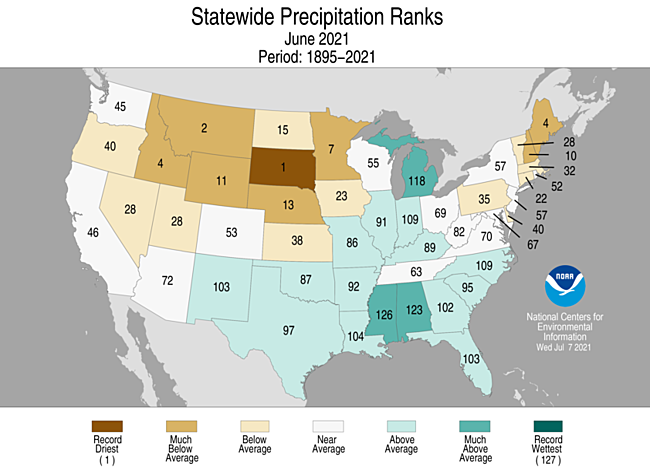 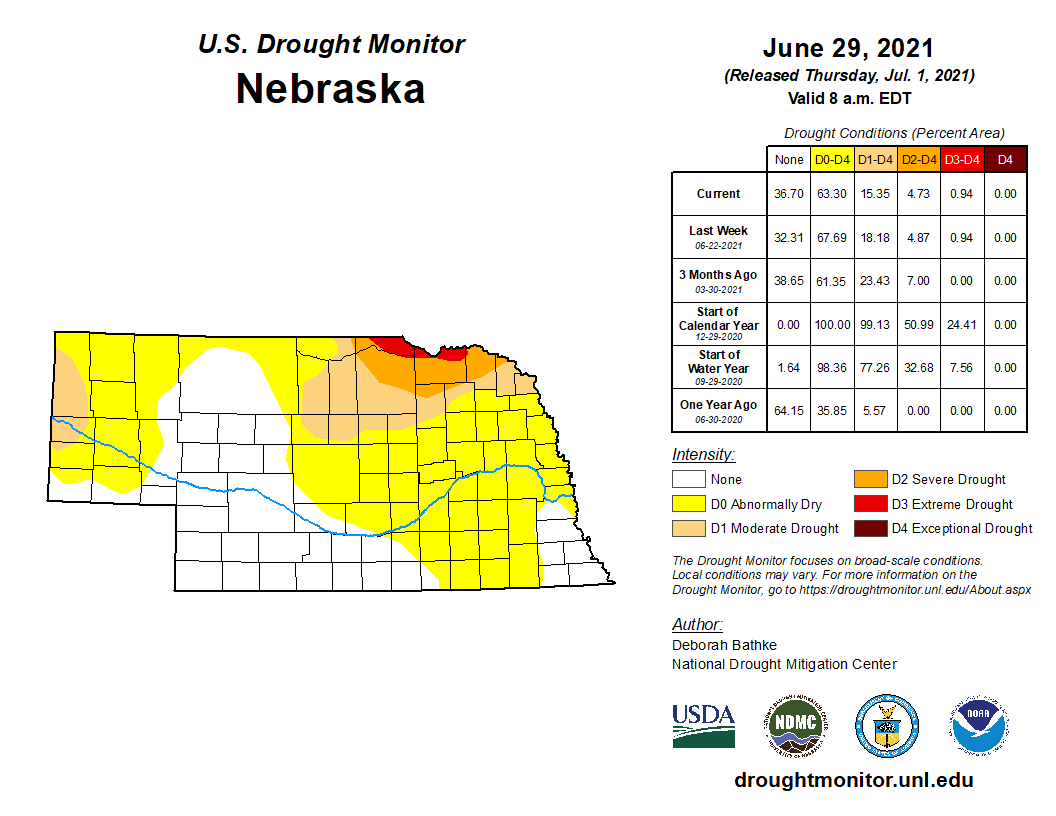 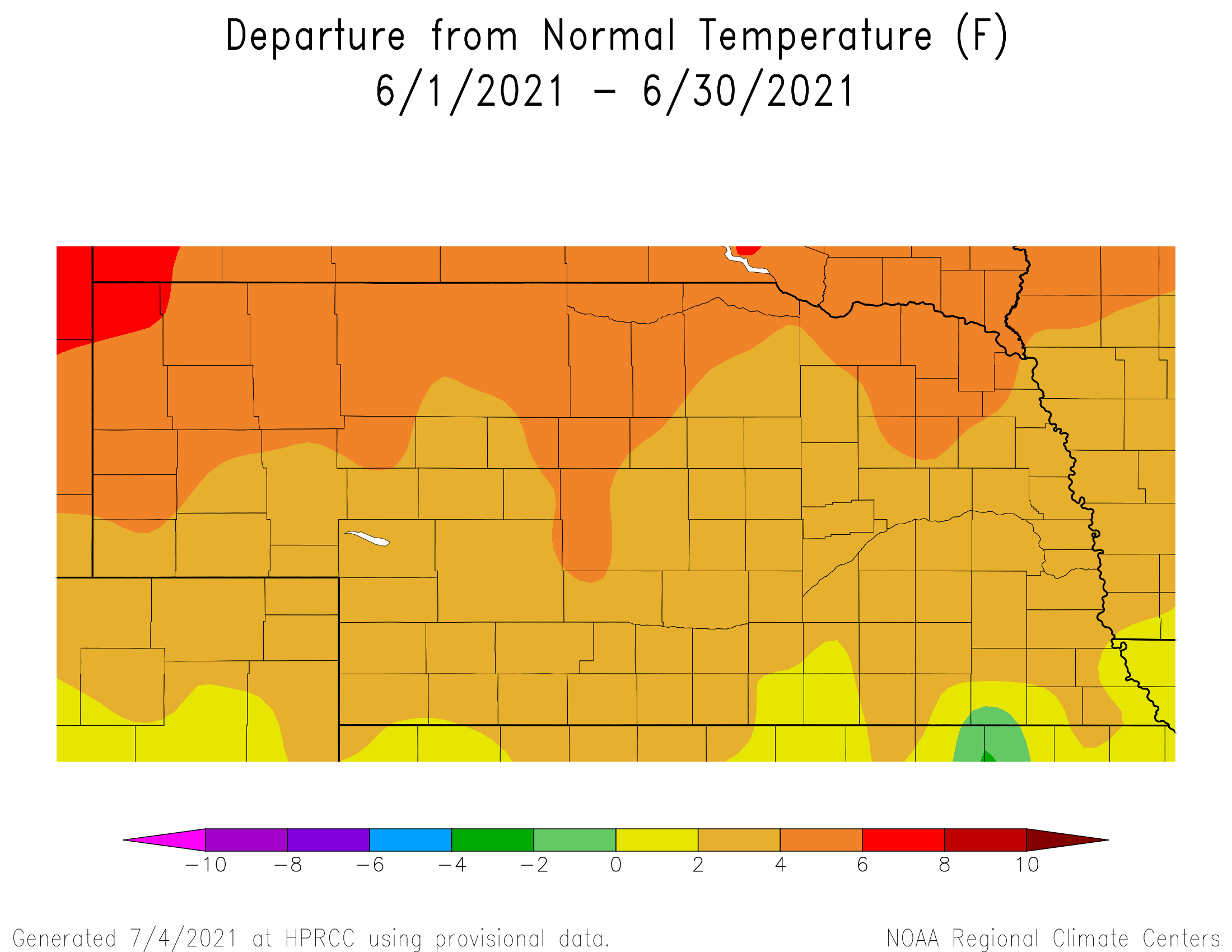 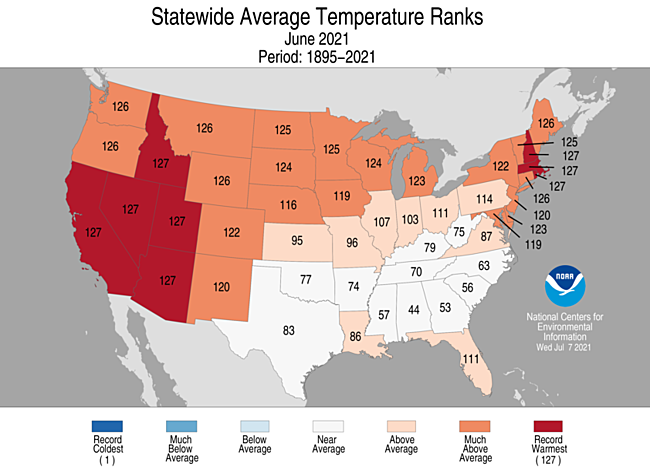 More than a dozen temperature records were tied or broken across Nebraska in the 12th warmest June on record. Earlier than normal heat resulted in triple digit readings nearly statewide. On average, temperatures were 2 to 6°F above normal, though we did escape the excessive heat gripping the west and northern plains. Rainfall mostly fell short of normal in the 13th driest June statewide, though a few pockets had abundant precipitation such as 11 inches observed in the far southeast. Dryness expanded across the eastern half of the state, according to the U.S. Drought Monitor, leaving 63% of Nebraska abnormally dry and 15% in moderate to extreme drought. Unfortunately, the climate outlook is calling for more of the same with hot and dry conditions overall for July.

Crop rating for corn, soybean, and sorghum have remained above 80% good to excellent condition for each crop progress report issued by the Nebraska Agricultural Statistics Service (NASS) during the month of July. Time rainfall events the last 10 days of July help keep crop ratings unusually high, even though pastures and winter wheat exhibited crop declines during the same period. Much of this difference in ratings can be directly tied to water demand issues. Corn is now reaching peak water use, with soybeans about 10 days from peak water use and sorghum about 3 weeks away. Peak water use for wheat occurred 30-45 days ago, while pastures have been at peak water use for the past two months.

Most locations that are exhibiting moisture stress are predominately wheat and pasture regions of the state where cool season crops have effectively mined stored soil moisture and need timely rainfall events to minimize further crop condition declines. The most significant crop rating declines for pastures occurred the week of June 13th when daily high temperatures were persistently above 95°F with high temperatures breaching 100 F July 16-17 statewide. High temperatures reached 108°F at Valentine during this stretch. Looking at the state spread in extreme temperatures, the range between the lowest temperature recorded (-39°F) in February and maximum temperature (108°F) in July has resulted in a spread of 147°F this year so far. Widespread irrigation is occurring in response to the recent heat and lack of moisture, especially across central, south central, and west central Nebraska which missed the more widespread 1-3 inches of moisture that hit much of eastern Nebraska the last 10 days of the month. Across extreme southeastern Nebraska, daily precipitation totals ranged from 5-9 inches the evening of June 24 through the morning of June 25. Although numerous flash flood warnings were issued for areas east and south of Lincoln due to the heavy rainfall, UNL Extension Educators reported little crop damage from the event. In fact, most of the water had completely drained off of fields within 3 days, indicating that dryness prior to the event had left enough storage room in the upper two feet of the soil profile to handle the event without widespread and long-lived flooding issues.

CPC indicates that below normal precipitation are forecast for all of Nebraska, except for the southern tier of counties along the Nebraska-Kansas border where there are equal chances of receiving above normal, normal, or below normal precipitation. The highest probabilities for dryness have been assigned to the northern tier of counties bordering South Dakota. Compared to the preliminary July precipitation outlook issued by CPC on June 17th, below normal precipitation has been shifted southward about 100 miles and eastward nearly 300 miles with the eastern edge reaching the western edge of Lake Superior. Short term weather models for the first half of June indicate that normal to above normal temperatures are likely for Nebraska through the first 10 days of the month as a series of short waves will work across the northern Plains leading to a roller coaster temperature ride that will consist of 3-4 days in the 80’s followed by several days in the 90’s, with the cycle repeating through mid-month. The GFS model indicates that upper 90’s to low 100’s may develop July 15-18 across the western half of the state and widespread precipitation chances will be limited to July 5-6. Isolated summertime convection is possible, but will be insufficient in producing normal precipitation according to the GFS model. There is some evidence that a return to normal temperatures and another upper air trough moving through the state the third full week of July.

Localized storms were generally the rule this June. High winds were observed on 6 days with a total of 43 reports. The Nebraska Mesonet station 20 miles south of Long Pine reported a high wind gust of 54 mph (at 9 ft above ground). Hail was prevalent with a storm event on the 22nd and 23rd and 54 official reports were documented throughout the month. A team from Nebraska Extension has developed an online resource for assessing hail damage, decisions regarding replanting and insurance. Visit here for more information: https://cropwatch.unl.edu/hailknow. Two tornados were reported and both in Sioux county on the 18th and 19th.

In what is typically one of the wettest months of the year across Nebraska, much of the state only saw half of normal rainfall totals (less than three inches). The statewide average monthly total was 2.11 inches, ranking 13th driest on record. There were some pockets of 25% of normal in central Nebraska (less than an inch). However, isolated areas in the northcentral and far southeast received twice normal rainfall (greater than four inches), or more. Rainfall in excess of nine inches occurred at several locations from Falls City almost to DuBois. The NeRain observer near Verdon reported a whopping 7.91 inches in a 24-hour period and a total of 11.17 inches for the month. Localized heavy rain also was reported in other areas of the state. The Nebraska Mesonet station near Pierce reported an hourly total of two inches. The number of days with rainfall ranged from 2 to 11 across the state. Rainfall during June varies quite a bit historically with no discernable trend toward wetter or drier in the long-term (since 1900). That is also the case over the past three decades with a lot of variability and lack of a trend. We have gone from 1.47 inches for the statewide average in 2002 to 7.40 inches in 2010, and everything in between.

Drought conditions worsened, according to the U.S. Drought Monitor, due to the hot and generally dry weather. The areas of greatest concern thus far include northeast Nebraska and the western Panhandle. Abnormal dryness expanded into the eastern half of the state during the month.

It was quite warm across Nebraska during June, though we were fortunate to be on the edge of the extreme heat for the west and northern Plains. Triple digit heat occurred virtually statewide, which is earlier than normal here. Both daytime high and warm nighttime low temperature records were tied or broken from Omaha to Valentine and down to Sidney. Most of the records were reported on the 17th. The Nebraska Mesonet station near Dickens reported a 100 degree bare soil temperature at the 4 inch depth. Temperatures reached a scorching 109°F in the southwest. Many locations experienced a week’s worth of 95°F, or warmer, days. The lowest observed temperatures were in the 40s and 50s with a few locations dipping into the 30s during the month.

The average statewide temperature of 72.8°F was 3.7 degrees above average and ranks as 12th warmest on record. Nebraska has generally trended warmer over time during June and the rate of increase is picking up speed. We have warmed by 3.6°F in the last three decades compared to 1.2°F of warming since 1900.