Nebraska continued its warm trend in 2017 with the third straight month of statewide average above-normal temperatures. The average temperature of 42.2°F ranked as 11th warmest and was 4.1°F above the 30-year average (1981 – 2010). Temperature departures were strongest in the west at +6°F and least in the east at +2°F. Over the long term, March temperatures in Nebraska have shown a warming trend over time with an increase of 4°F since systematic record-keeping began in 1895.

Precipitation totals for the month showed some regional differences across Nebraska. Areas of the Panhandle, southwest, central and southeast benefited from the relatively wet and active weather pattern for the Central U.S. These areas ended March in the above-normal category. Portions of the northcentral and east received 70 percent of normal or less. Nebraska Mesonet stations reported rainfall totals ranging from 0.07 inches in central Cherry County (Mullen 30N, Merritt area) to 3.86 inches at Indian Cave State Park in the southeast (Nemaha 4SE). Most Mesonet stations observed more than an inch for the month. The driest areas statewide were in northcentral Nebraska. For the state as a whole, the monthly total precipitation averaged 1.56 inches, which is 0.06 inches wetter than the 30-year average. When looking back to 1895, the overall trend in March precipitation is a slight increase, by approximately three tenths of an inch.

Soils continue to warm as spring progresses. In one month’s time, temperatures under bare ground at the four-inch depth are averaging approximately 10 degrees higher than at the end of February. By the start of April, the weekly average bare soil temperature was in the mid to high 40s across the state.

Nebraska did see a slight alleviation of drought conditions with an 8 percent area reduction in March. By month’s end, the US Drought Monitor identified 25 percent of Nebraska in the D0 to D1 category. Incidentally, this is approximately the same percentage compared to early April 2016. Areas of the state experiencing dryness remain in the south and southwest as well as the northern Panhandle. With the most recent seasonal drought outlook released mid-March, there has been a change since last month with drought removal likely for the southwest, in addition to the small D1 area in Kearney county.

Climate outlooks for mid-April indicates strong probability (50 percent chance) of temperatures in the warmer than normal category. These increased probabilities extend through much of the eastern two-thirds of the contiguous U.S. Along with warmth, the pattern of wetness we’ve experienced the latter half of March has the highest probability to continue in mid-April. Climatologically, April is typically the month when most areas of Nebraska experience the last freeze of the season.

The seasonal outlook for April – May – June temperatures are indicative of continued warmth with the odds tilted toward this category. This probability signature has carried over from the previous seasonal outlook published last month. For precipitation, the wet signature for the northcentral U.S. remains and has shifted south to cover the northern half of Nebraska.

Nebraska’s statewide weather network operated by the University of Nebraska Lincoln, the Nebraska Mesonet, cataloged the following extremes this March: 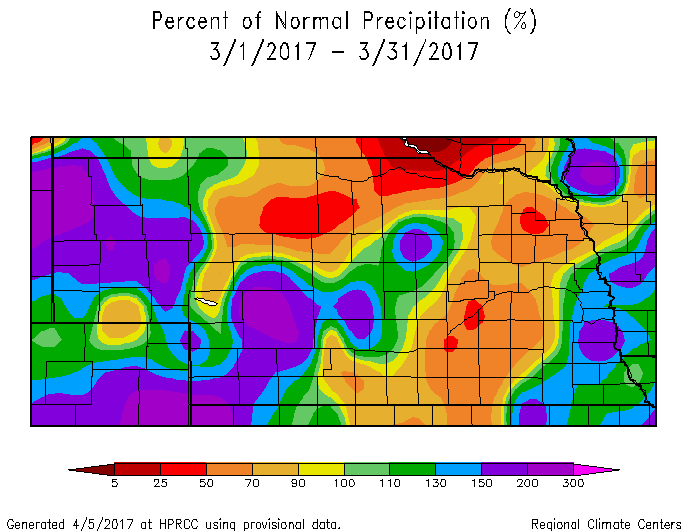 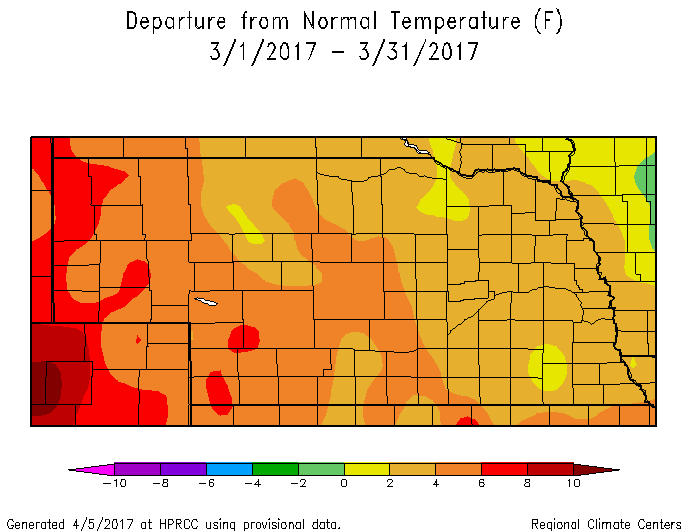 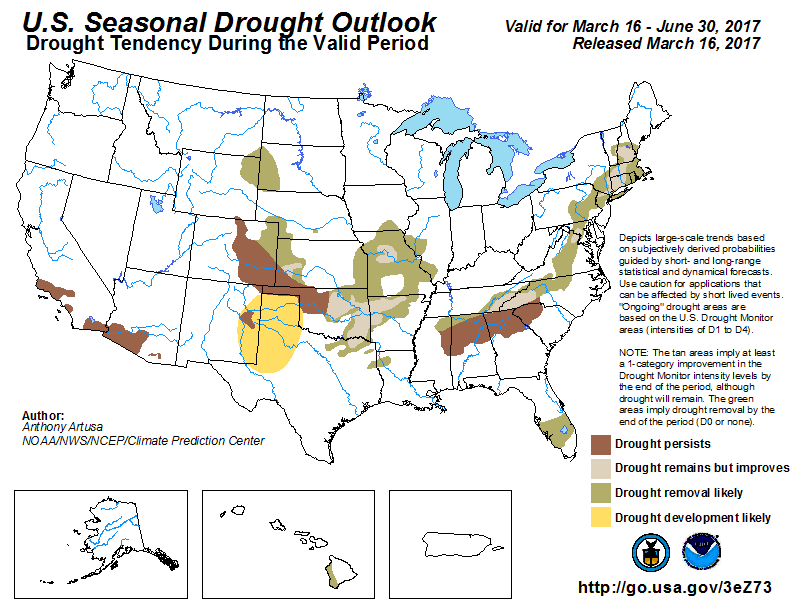 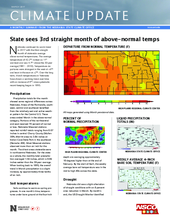