Too much and not enough rain this July 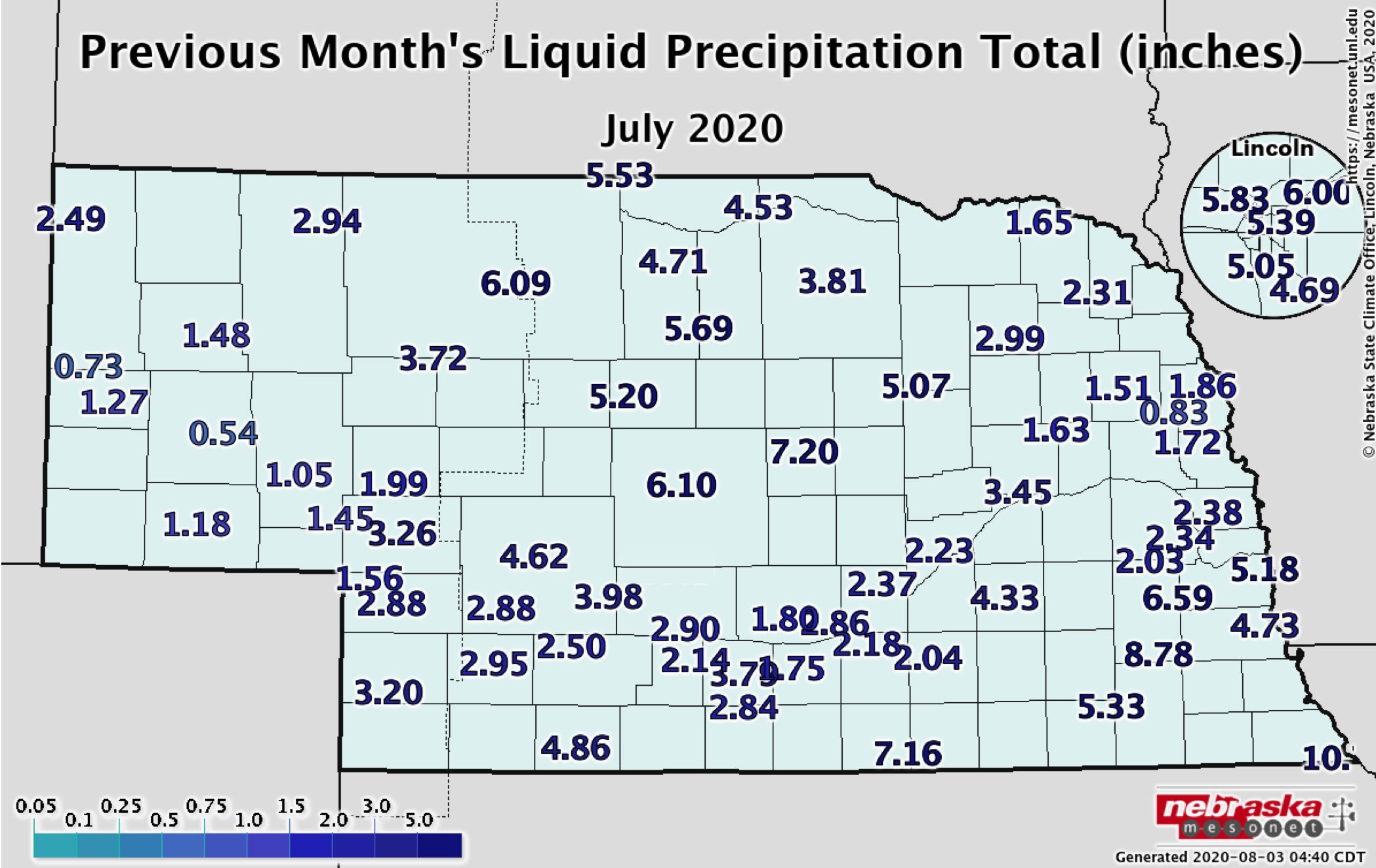 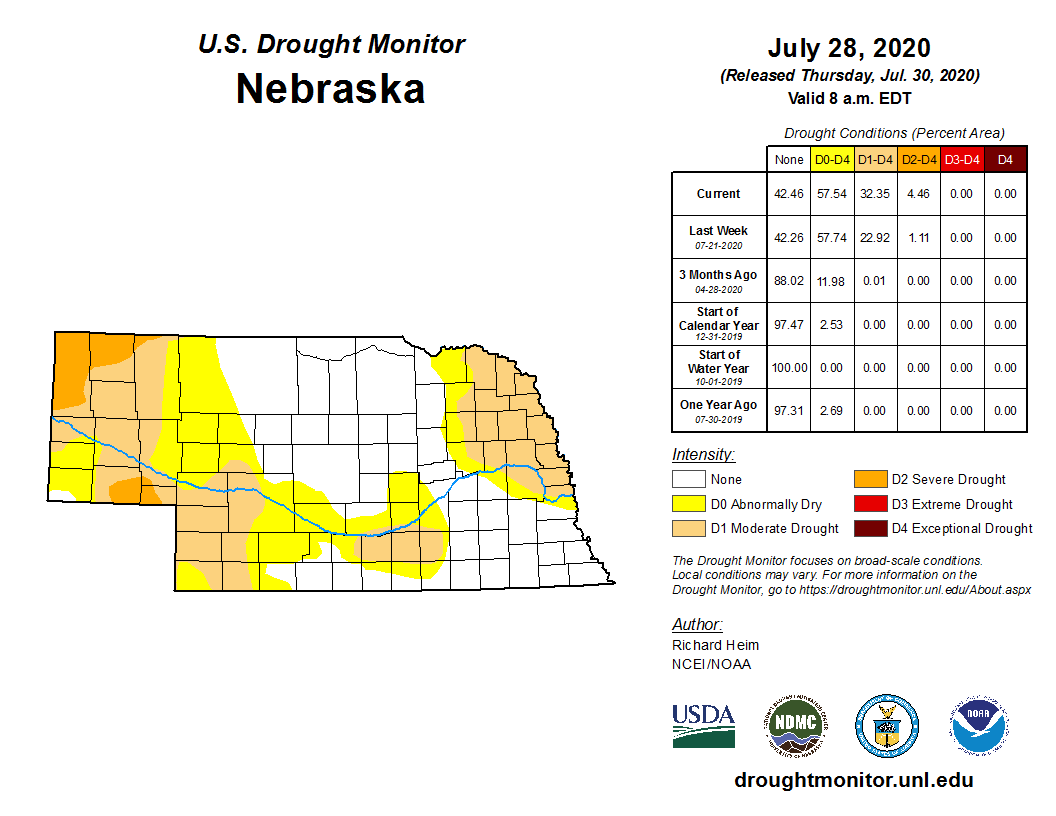 U.S. Drought Monitor depiction at the end of July

U.S. Drought Monitor depiction at the end of July

Temperature outlook for August, September and October from the Climate Prediction Center

Temperature outlook for August, September and October from the Climate Prediction Center

Precipitation outlook for August, September and October from the Climate Prediction Center

Precipitation outlook for August, September and October from the Climate Prediction Center

There was quite a range of rainfall amounts this July across Nebraska as monthly totals varied widely. Hebron experienced the wettest month on record with 16.70 inches, while the Scottsbluff area had less than half an inch. Drought conditions worsened in the northeast, southwest and west and now covers 32% of the state. Temperatures were generally a few degrees warmer than normal for the monthly average. Quite a few locations reached triple digit heat and there were several nights that did not cool below 75°F for some locations in the east. Strong winds resulted in some crop damage early in the month for portions of south central Nebraska. A total of 18 tornados were reported in July, all in the western half of the state, 53 hail reports and 129 reports of high wind.

It was a story of the haves and the have nots for rain this July with significant variability statewide. The highest totals were found in the north central and southeast. Most notably, Hebron reported the wettest month in it’s entire climate record with 16.70 inches. This beat the 1992 record by nearly two inches and is a whopping 12 inches above average. Areas around Superior reported 13 inches and 10 – 12 inches was reported around Falls City. The highest one-day totals were more than four inches, observed at Hebron (4.98”, 27th), Falls City (4.90”, 15th) and Ord (4.45”, 20th). The dryness continued in the northeast with only 1 – 2 inches (2 – 3 inches below average) for the month. Less than an inch fell for portions of the Panhandle (about an inch below average). Rainfall for the May to July period are 3 – 8 inches above normal for the northcentral and southeast while deficits are in the 3 – 6 inch range for the northeast and west. The month on the whole averaged 3.9 inches, which is 0.69” wetter compared to the 1981-2010 average.

July was generally warmer than normal this year, average about 1 – 2°F above average. Only a few locations reported an overall cooler than average month. Temperature extremes were found in the west and ranged from 107°F at Chadron to 40°F south of Harrison. Days with a high temperature above 90°F were generally quite common around the state, occurring during 1 – 3 weeks in July. A few locations in the east reported minimum temperatures at or above a steamy 75°F. The statewide average temperature was 75.3°F, which is one degree above average.

Perhaps the two biggest stories during the month of July were the lack of significant high temperature stress during pollination and the significant deterioration of pasture conditions across western Nebraska. Dryness issues were beginning to become problematic at the end of July for areas of central and eastern Nebraska due to accumulated dryness in June and July. All was not lost, as heavy rainfall was reported along the Kansas-Nebraska border in pockets from the southwest through the southeast.

According to Nebraska Agricultural Statistics Service (NASS) pasture ratings declined to their worst levels with the July 12 crop progress release when 14% of pasture acreage was rated in the very poor to poor category. Periodic rainfall events with localized heavy rainfall during the second half of July across southern Nebraska reduced the very poor to poor category to below 10% by month’s end.

Analysis of temperature data from the Nebraska Mesonet suggests that there was a lack of significant high temperature stress during the corn silk stage. The most intense heat occurred across western Nebraska approximately 7-10 days before the crop entered the silk stage when high temperatures were consistently in the 90s. East of the Panhandle, there was a lack of sustained heat lasting more than two days at a time from July 12-26 when NASS estimates 70% of the crop reached the silk stage.

Probably the most detrimental pollination issue that occurred during July was the high wind event across the southern half of the state associated with an eastward-moving line of severe thunderstorms on July 7-8. Peak wind gusts ranging from 70 to 90 mph resulted in green snap of corn with damage estimates of 2-20% reported across south central and southeast Nebraska. Clay county green snap estimates were significantly higher, approaching 85% for fields in the eastern half of the county.

For the second consecutive month, the preliminary monthly temperature and precipitation outlooks released during the mid-month period has undergone significant changes with the update forecast issued at month’s end. In simple terms, Climate Prediction Center’s outlook has now switched from warmer than normal to a cooler than normal. The precipitation outlook has switched to above normal chances for eastern Nebraska and is in the identical position of the below normal temperature forecast.

Much of the updated outlook likely revolves around the jet stream pattern at the end of July. A significant cool down, resembling early September temperatures, was expected to continue into the first half of August. Updated model forecasts issued the first few days of August have reverted back to a warmer and potentially drier pattern beginning as early as August 7th statewide. If the GFS is correct, the upper atmospheric pattern projected for mid-month will continue through the majority of the second half of August.

With global models indicating that La Niña conditions are likely to develop through the fall period, drier than normal conditions would be favored over the southern half of the High Plains region (I-80 corridor southward), based upon climate statistics. Above normal temperatures are favored for much of the High Plains region, with the strongest correlation during a building La Niña event assigned to the area from the Nebraska/South Dakota border southward. 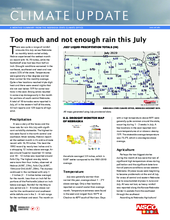