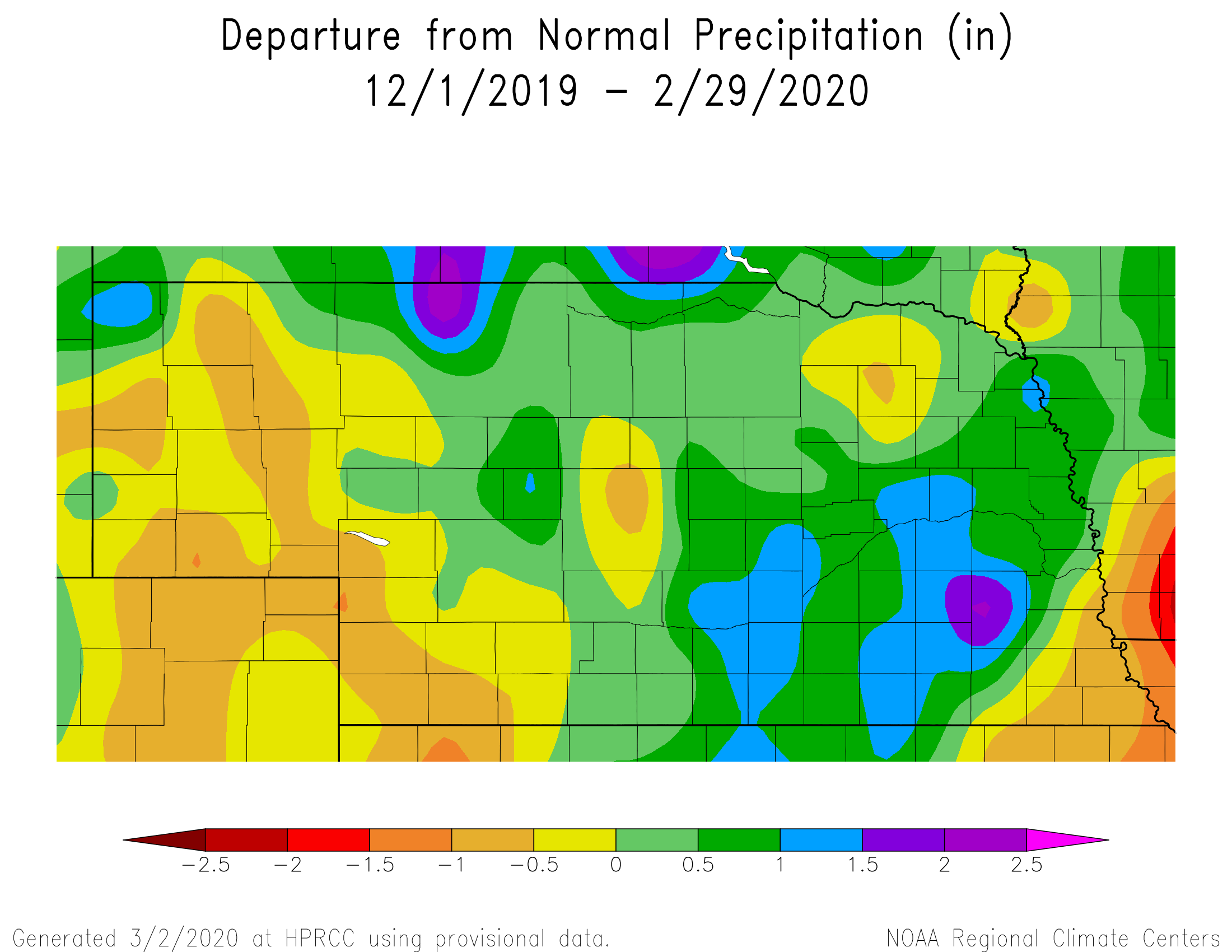 Relative warmth and dryness was the general rule for a majority of Nebraska this February. Thankfully this was quite a departure from conditions in place one year ago. Ice jam flooding has occurred thus far for a few isolated areas in the east. More broadly, due to soil saturation levels and high river levels, the spring flood risk remains above normal. Location, timing and amount of spring rainfall will be a key factor that determines flood occurrence and severity. The Climate Prediction Center outlook for the first half of March places Nebraska in a warmer- and wetter-than-normal pattern. For March on the whole, however, warm and dry conditions could dominate.

Much of Nebraska rounded out the winter season with warmer-than-normal conditions. Temperatures were relatively mild for about two-thirds of the state this February with the strongest departures (2 – 3°F above average) found in the east. In southwest Nebraska, temperatures soared to 80 degrees or higher for a handful of observing stations. This warmth occurred early in the month and new daily high temperature records were set at Alliance (70°F) and Scottsbluff (72°F) on Feb. 2.

February was not without a substantial cool down though. Temperatures as low as -20°F were reported in the northeast and, in fact, nearly everywhere in the state went below zero. On average, high temperatures were in the low- to mid-40s, and low temperatures were mostly in the teens. The statewide average of 29°F was 2.7°F warmer than normal.

Snowfall totals were highest in the west and north. Chadron reported a whopping 18.4 inches for the month. Areas of the Sandhills and Panhandle received 8 or more inches. The rest of the state was relatively light on snowfall. North Platte did report a record daily snowfall of 2.4 inches for Feb. 25. Seasonal totals to date are lowest in the southeast at around 8 to 16 inches. The northeast has received anywhere from 20 to 40 inches, central Nebraska 20 to 30 inches, and the Panhandle 30 to 40 inches.

Precipitation (rain and liquid equivalence of snow) was quite light in what is typically one of the driest months of the year. Only a quarter inch or less was received in the eastern half of Nebraska and portions of the southwest and Panhandle. The highest precipitation of about a half-inch was received in a north-south swath in west central Nebraska. The statewide average was 0.24 inches, which is 0.42 inches below average. According to the U.S. Drought Monitor, portions of a seven county area in the southwest is abnormally dry. Precipitation was about 50% of normal here this winter season.

Soil temperatures are quite moderate for this time of year due to the relative winter warmth. Frost depth is mostly out around the state, or thawing quickly, as mild temperatures dominate. Only the extreme northeast and northwest Nebraska had frost depth that reached down to 8 inches. Soil moisture levels remain relatively high for much of central and eastern Nebraska, particularly at the deeper levels (20-40 inches). The dry areas of the state remain to be in southwest Nebraska and portions of the Panhandle.

Snowpack in the North and South Platte basins are running above normal for this time of year. Several months remain, however, in the snow accumulation season. Nebraska started March with little snow on the ground, overall, with the exception of the northern Panhandle and the scattered areas in the northern part of the state.

Wheat is beginning to green up south of the I-80 corridor and is most advanced along the Kansas border. With drier soils across the southwestern corner of the state and abnormally dry conditions currently in place, according to the National Drought Monitor, this area will need to be watched closely for stress development during March if rains fail to provide enough moisture to bring the top foot of the profile back to normal.  However, cattle producers have benefited from the relatively mild conditions during February and are not experiencing death losses and cold related injuries that were common across most of the upper Plains during February and March of last year.

The lack of significant frost depth this winter has allowed for excessive water laying on fields to drain into rivers and streams resulting in higher than normal flows, particularly within the Blue, Elkhorn, Platte, Loup and Missouri river basins the entire winter.  This helped alleviate ice jams due to strong flows not allowing ice to ground and build depth on sandbars and shoals, and the result was that only a couple of minor ice jams developed toward the end of the month and only lasted one to two days in length.

However, because of the excessive moisture in 2019, flood risk will remain high through at least spring planting due to soil profiles being full. As long as we can get 7 to 10 days of dry weather between significant precipitation events, producers may escape significant planting delays.

The Climate Prediction Centers updated March forecast issued on Feb. 29 calls for above-normal temperatures across the eastern half of the United States, including Nebraska.  Extreme eastern Nebraska has been assigned the highest probability of these conditions developing.  Precipitation is forecasted to come in below normal during March across Nebraska, Kansas, the western half of Oklahoma, and the northern Texas Panhandle.  Above-normal moisture is predicted for the eastern Corn Belt, as well as the lower Ohio and Mississippi river valleys.  If this forecast verifies, dryness issues across southwestern Nebraska would be expected to intensify, while soils in the eastern U.S. will likely remain wet to saturated, compounding river flooding that has been common most of the winter. 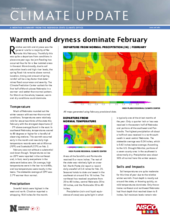