Warmth, dryness round out the fall season

November brought Nebraskans above-average temperatures and below-normal precipitation. In the eastern part of the state, temperatures were slightly above normal, but the west and north-central portions of the state saw temperatures rise about 5 degrees above normal. This was coupled with well-below-normal precipitation levels across the entire state. Learn more about what November's climate conditions meant for Nebraskans in this month's edition of the Climate Update. 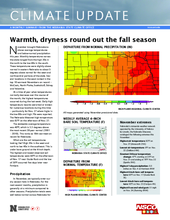