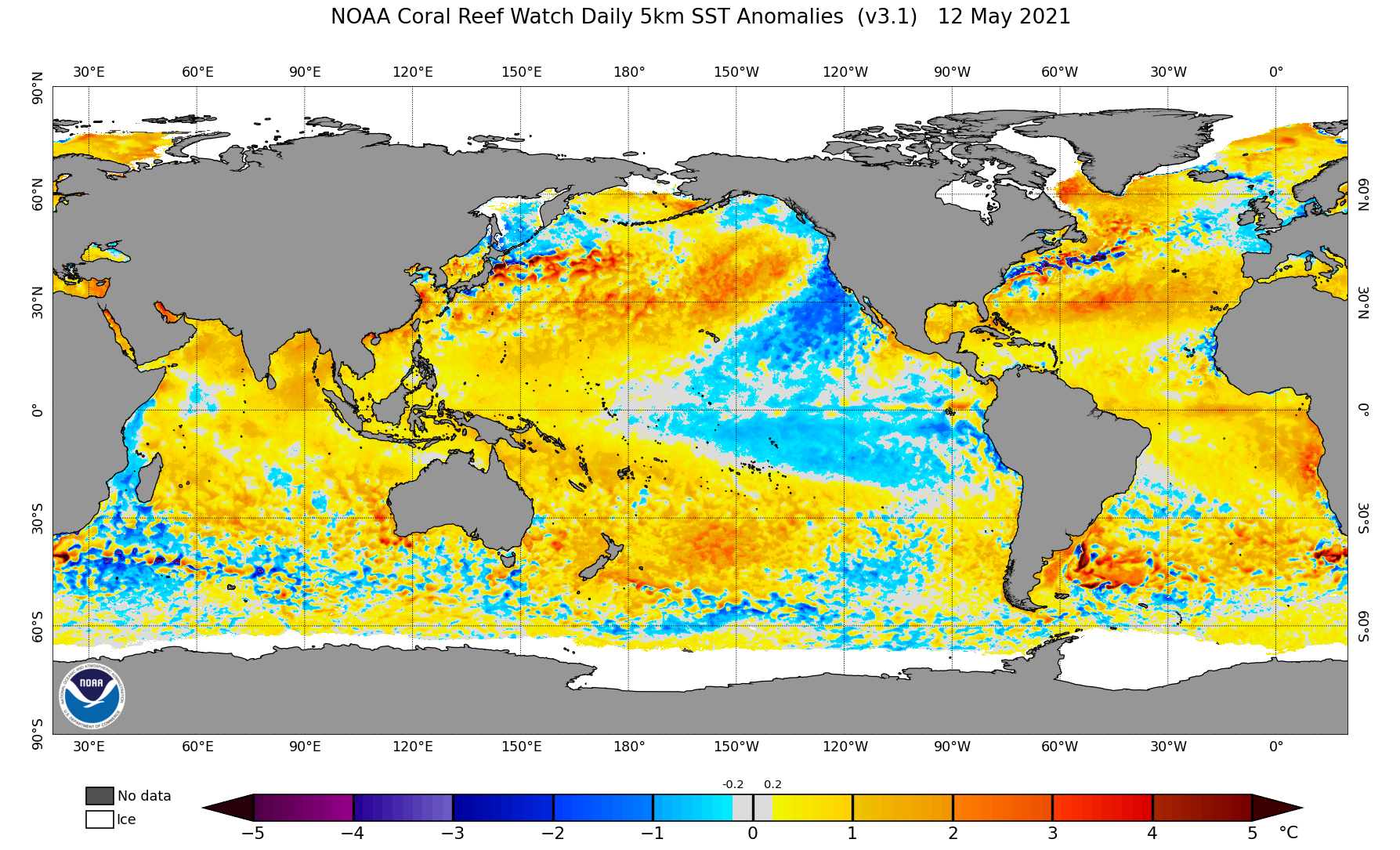 The Climate Prediction Center (CPC) released their latest La Nina update on May 13th and has officially declared an end to the event as their metrics have now fallen below the minimum temperature anomaly criteria used to define La Nina conditions. CPC indicates that the central Equatorial Pacific sea surface temperature (SST) anomalies have now warmed above -0.5 C, which is the minimum criteria for a weak La Nina event.

Compared to last month’s conditions, the central Equatorial cold pool (surface and sub-surface) has shrunken in area by at least 50 percent. The depth of the cold pool is now about 25 meters, compared to 50 meters last month. Based upon the sub-surface heat that extends from Australia to the eastern Equatorial Pacific, it is likely that eastern Equatorial Pacific above normal SST anomalies will build westward during this upcoming summer.

The limiting factor in how far westward above normal surface SST anomalies will move over the summer will be from the cold surface anomalies off of the western U.S. coastal region. The Gulf of Alaska upper air low climatologically weakens through mid-summer, before strengthening during the fall and winter. Some weakening of the west coast surface contribution into the central Equatorial Pacific would be expected and this would allow warm surface anomalies in the eastern basin to spread west.

Warming eastern Equatorial Pacific surface conditions would support increased evaporation for low and mid-level atmospheric transport into the southwestern United States as the summer progresses. This would also be supportive of a much more active tropical activity in the eastern Pacific. During the late summer and first half of the fall, a majority of these systems move towards Mexico's Baja Peninsula, with their remnants enhancing monsoon moisture events across the southwest and southern Rockies.

The southern jet stream has been active since early winter, as pieces of energy moving into the Pacific Northwest broke away from the northern jet to form cutoff lows over the Great Basin. The upper air lows slowly drifted eastward until the next upper air trough moving into the Pacific Northwest pushed the cutoff lows eastward. Therefore, the southern half of the High Plains has experienced more frequent and heavier precipitation events, while the northern High Plains has been too far north of the primary surface storm tracks.

With the warm surface anomalies building into the eastern Equatorial Pacific, these southern stream lows will likely persist into the early summer. The weather pattern setting up over the southern Plains over the next week (3-5 inches forecast) is a perfect example of this process and how significant moisture output can be when the system takes 3-5 days to move from the southern Rockies to southeastern United States.

The moisture events falling to the south of us will eventually be reflected in an increase in relative humidity levels and transpiration as warm season crops begin their rapid growth stages within the next 30 days. Ultimately, summer precipitation over the northern Plains will be dependent on low level moisture transport from the southern Plains and active upper air troughs moving from the Pacific Northwest eastward through the northern Rockies, instead of cutting off and drifting southeast toward the central Rockies.

CPC will incorporate the latest La Nina update into their seasonal forecasts due to be released next Thursday (May 20). They have been consistently calling for severe dryness across the northern Rockies and northern Plains for the spring through early fall, spreading the area southward through Nebraska during the second half of the summer.

If CPC keeps the southern half of the High Plains free of a dry summer signal, then the southern 2/3 of the state is likely to escape major drought impacts this summer. The northern 1/3 of the state bears watching in regards to CPC’s outlook as dry signals from last summer on have not been eliminated. In fact, the dry conditions from April through present have intensified both long and short term moisture deficits.

Going forward in time, an expanding warm pool in the eastern Equatorial Pacific could develop into weak El Nino like conditions by late summer or early fall. If this does occur, then climatology would favor dryness over the northern Plains during the late summer through fall period. My complete summer forecast for Nebraska will be released next Friday (May 21) after the official United States summer outlook for temperatures and precipitation is released by CPC on Thursday.