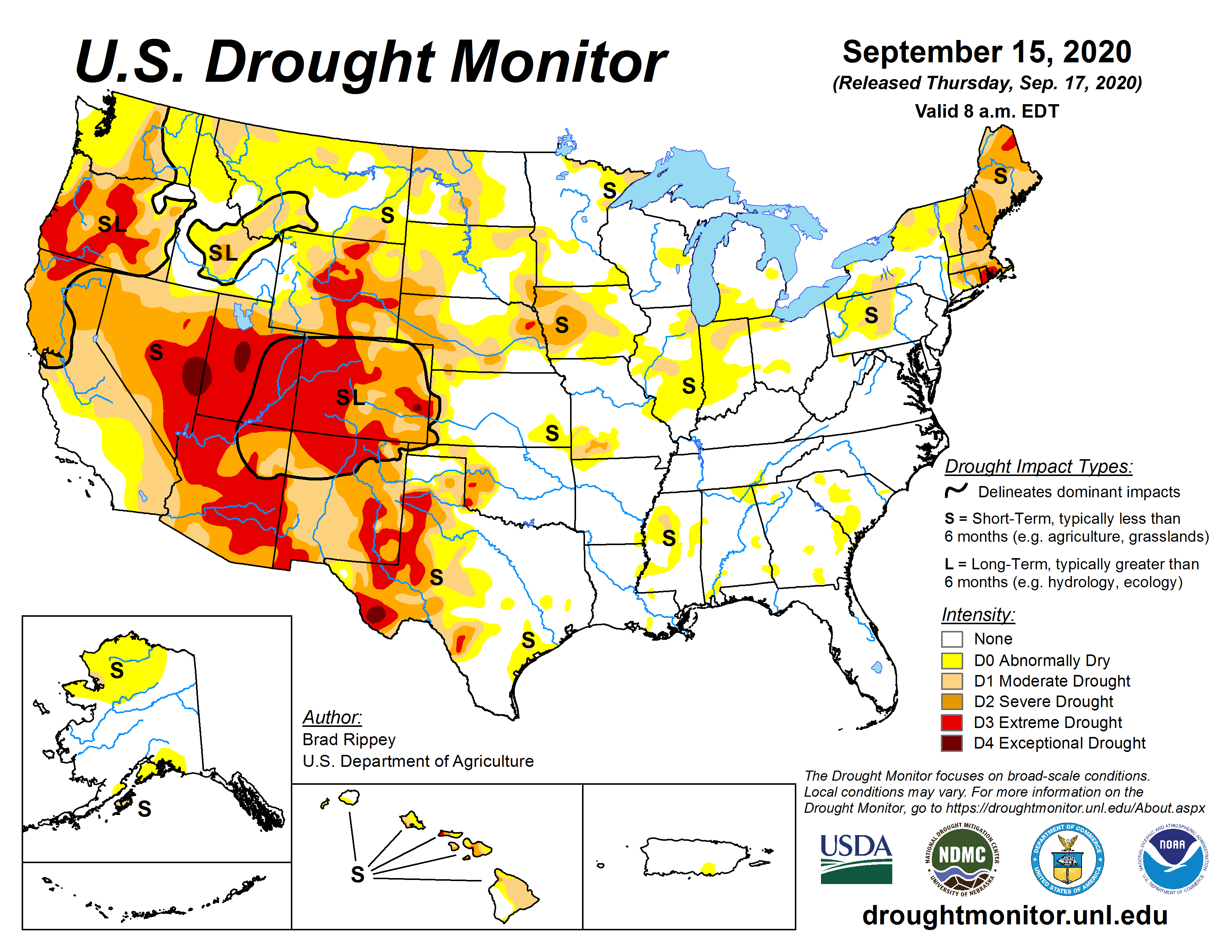 In a normal year, the Labor Day week precipitation would have led to longer harvest delays due to weter soil surfaces. However, the expansive dry conditions that have dominated the western half of the state most of this summer have resulted in moderate to severe drought conditions as seen in Figure 1. Subsoil moisture has been depleted and any available soil moisture that is contained within the soil profile is limited to the topsoil layer. The majority of soils across the western half of Nebraska have water holding capacities ranging from 0.50 inches (Valentine sands) to 1.50 inches (silty loams). Therefore, estimated moisture infiltration with the Labor Day week storm potentially filled the top soil layer (upper 12 inches) to 50% of their available water holding capacity.

With the dry weather that followed the Labor Day week storm, soil surfaces quickly dried out and harvest activity last week showed decent progress for mid-September according to Nebraska Agricultural Statistics Service (NASS). As of September 20th, NASS reports that 10 percent of the corn and soybean acreage had been harvested, a 6 percentage point gain over their harvest estimates on September 15th. Normal harvest activity (5-year average) should be 4% for both crops by the third week of September. Going forward, the length of time that dry conditions envelope the central United States will ultimately determine how quickly crops come out of the field, especially when the topsoil layer is not at field capacity.

Weather conditions going forward will be influenced by the developing La Nina event in the Equatorial Pacific. La Nina conditions develop when pressure patterns across the basin weaken which allows low level winds to switch from an easterly to westerly component. This allows colder than normal water to build from the eastern into central Equatorial Pacific as seen in Figure 2. This activity weakens the subtropical jet stream (often called the southern jet) and climatologically decreases precipitation across the southern 1/3 of the United States during the fall and winter period. If the La Nina event doesn’t dissipate during the second half of the winter, these dry conditions often extend through the Spring and into the Summer growing season.

What does this mean for harvest activity across Nebraska? In general, La Nina conditions lead to warm and dry conditions during the Fall, especially during the months of September and October. In fact, the Climate Prediction Center (CPC) release of their October-December outlook September 17, which appear in Figures 3 and 4, supports this trend. For Nebraska, 50-60% of the moisture that normal falls from October through December occurs during October. If October is precipitation free, precipitation during the November-December period will need to double just to bring the 3 month period (Oct-Dec) back to normal.

According to the latest GFS model issued the morning of September 24, the dry trend that has developed over the last 10 days will through at least October 5th. Between October 5th and 7th the GFS model hints at a potential precipitation event as a surge of below normal temperatures is projected to slide southward out of Canada on the backside of a deep upper air trough situated over the Great Lakes region. If the season’s first frost doesn’t arrive October 1 with a push of Canadian air into the northern Plains, the GFS model hints that it will likely occur with this secondary push 4 days later.

The GFS model than quickly returns to a dry and warm pattern after this system pushes toward the eastern United States. Bottom line, at this point in time, there appears to be no major precipitation event through the middle of October that will delay harvest activity more than 1-2 days. If the GFS model is correct, by the time any active weather that could slow down harvest activity across the state arrives, the vast majority of warm season crops should be harvested.

In fact, based upon current model forecasts and the pace of harvest activity, there may be few soybeans to harvest by the time the calendar turns to October. Unfortunately, with drought firmly in control across the state, the forecast through the end of October will not be conducive to building normal Fall subsoil moisture reserves. This will put additional pressure on next Spring to be wetter than normal to bring subsoil moisture reserves to a point that they reduce the likelihood that drought conditions will continue into the 2021 growing season.