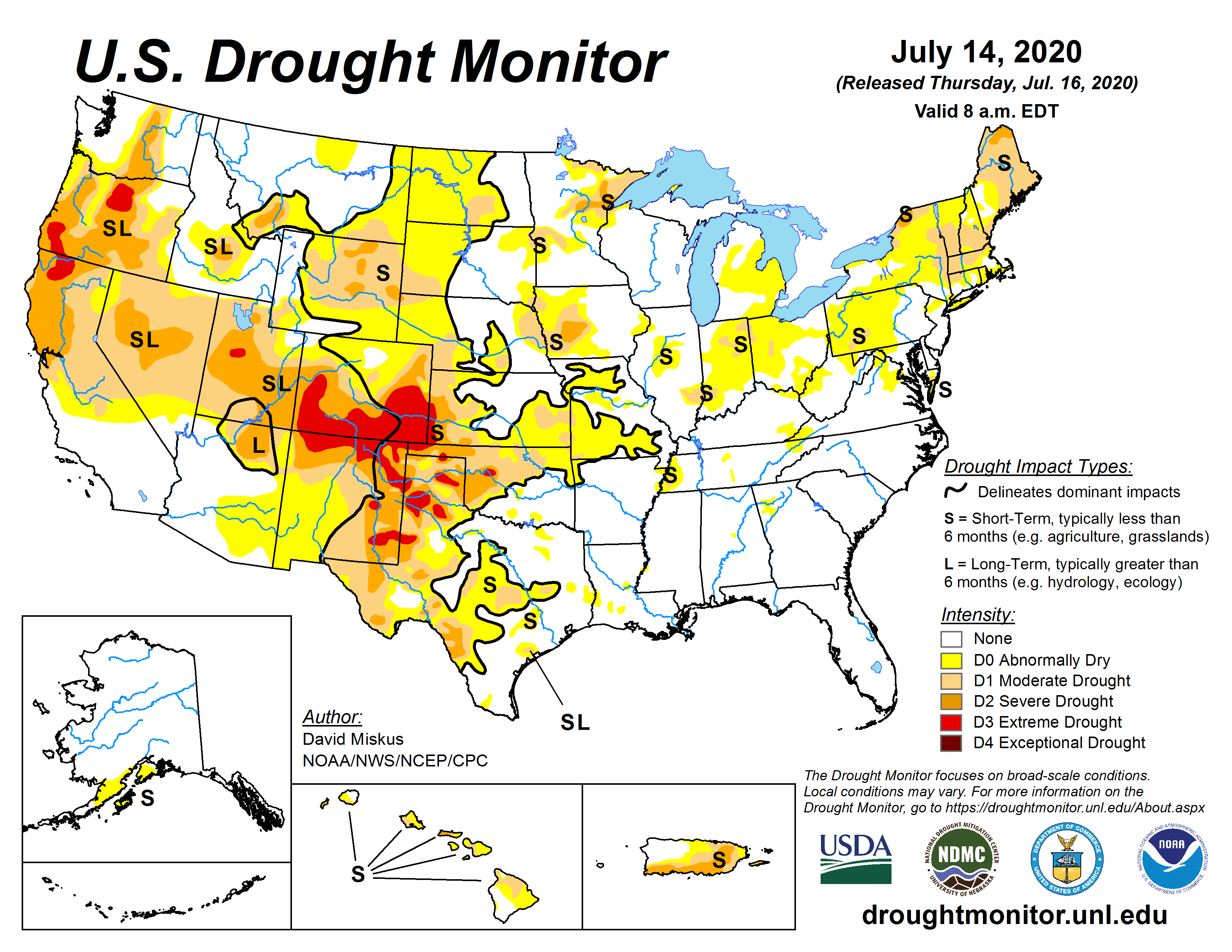 The Climate Prediction Center (CPC) issued their latest round of climate outlooks on July 16th for the month of August, August-October, as well as 3-month outlooks 18 months into the future. For Nebraska specific, the CPC outlooks offer us our first clues on whether the current drought impacts being felt across sections of western, southern, and eastern Nebraska will continue.

CPC’s August forecast offers on a slight glimmer of hope for widespread reductions in the current drought depiction for Nebraska. CPC indicates, all but extreme northern Nebraska will have a tendency toward above normal temperatures, with the highest probabilities assigned to the southern 1/3 of the state. There is a tendency toward above normal moisture across extreme northern Nebraska, with equal chances of above normal, normal, or below normal precipitation for the remainder of the state.

The current CPC August outlook appears to continue the atmospheric patterns that have been common for much of July. This pattern has featured the movement of upper air troughs from the Pacific Northwest toward the northern Plains and eventually the Great Lakes region. Prior to the arrival of the upper air trough, above normal temperatures have dominated. As the trough passes to the north of the state, precipitation and cooler temperatures return temporarily until the next upper air trough enters the northwestern U.S.

The most current GFS model runs into the first full week of August and appears to back CPC’s outlook. An upper air ridge will dominate the central and southern Plains, with another upper air trough expected to move toward the northern Plains at the beginning of the second week of August. This will increase precipitation chances across the northern Plains, with extreme northern Nebraska on the southern periphery of this forecasted wet area. The underlying question is whether any of this activity will be widespread enough to bring drought relief to the southern half of the state.

Getting moisture events to produce enough precipitation to eliminate the current drought signature will be difficult during the August-October period. According to CPC, temperatures nationwide are expected to be above normal. For Nebraska specific, the highest odds of occurrence have been assigned to the southern Panhandle and the southwestern corner of the state. Unfortunately, these same areas have been assigned a slight tendency toward drier than normal conditions, which lie on the northern periphery of a large area of below normal moisture extending from the Great Basin region east-southeast toward the western half of the central Plains.

If there is any consolation to be found in the August-October precipitation forecast, it is that CPC has also assigned above normal precipitation tendencies to the northern Plains. This area of above normal moisture extends southward to include the northern tier of counties from northwest through north central Nebraska. With the gradient between the two opposing forecasts lying across Nebraska, it is entirely possible that distinct periods of dryness will develop, interspersed with heavy precipitation events as upper air lows move across the northern Plains.

If moisture fails to materialize during the first half of the August-October period, the current drought depiction for the state is likely to expand eastward and intensify across areas of the state already designated as experiencing abnormal dryness to moderate drought conditions. Dry starts to the fall are good for harvest activity, but when they follow a drier than normal summer, building subsoil moisture reserves for the next growing season are compromised and will require wet winter and spring conditions to make up for the difference.

This is particularly relevant as CPC has issued a La Nina watch for this coming winter due to favorable sea surface temperatures and Equatorial Pacific winds aloft. The southern half of the High Plains region (I-80 corridor southward) tilts toward the drier than normal side of the equation when La Nina events develop, especially from central Kansas southward through Texas. With drought already firmly established, a further northward placement of drier than normal conditions is possible through the northward expansion of the upper air ridge that has been a dominant feature of the southern Plains the past 3 months.