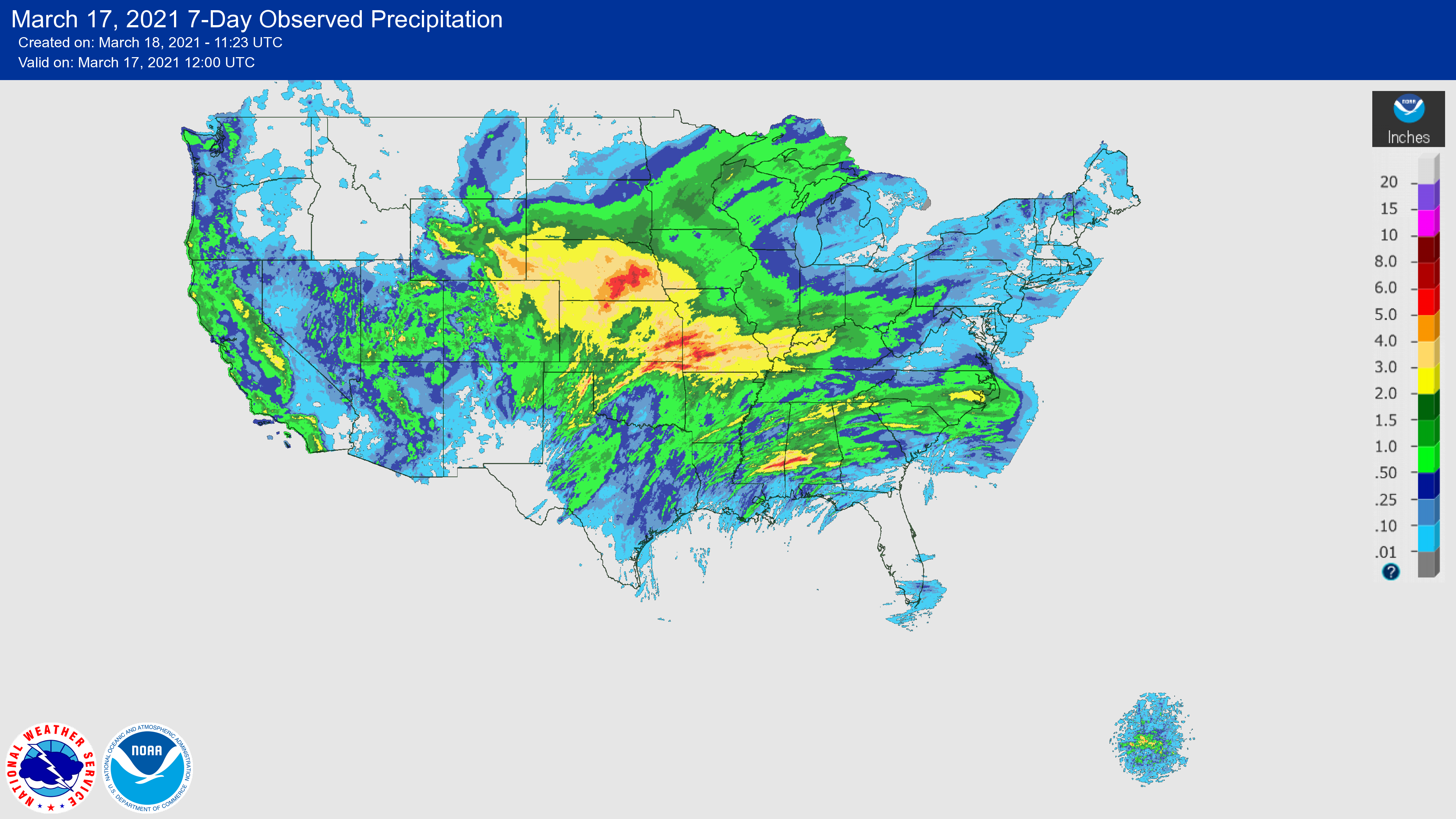 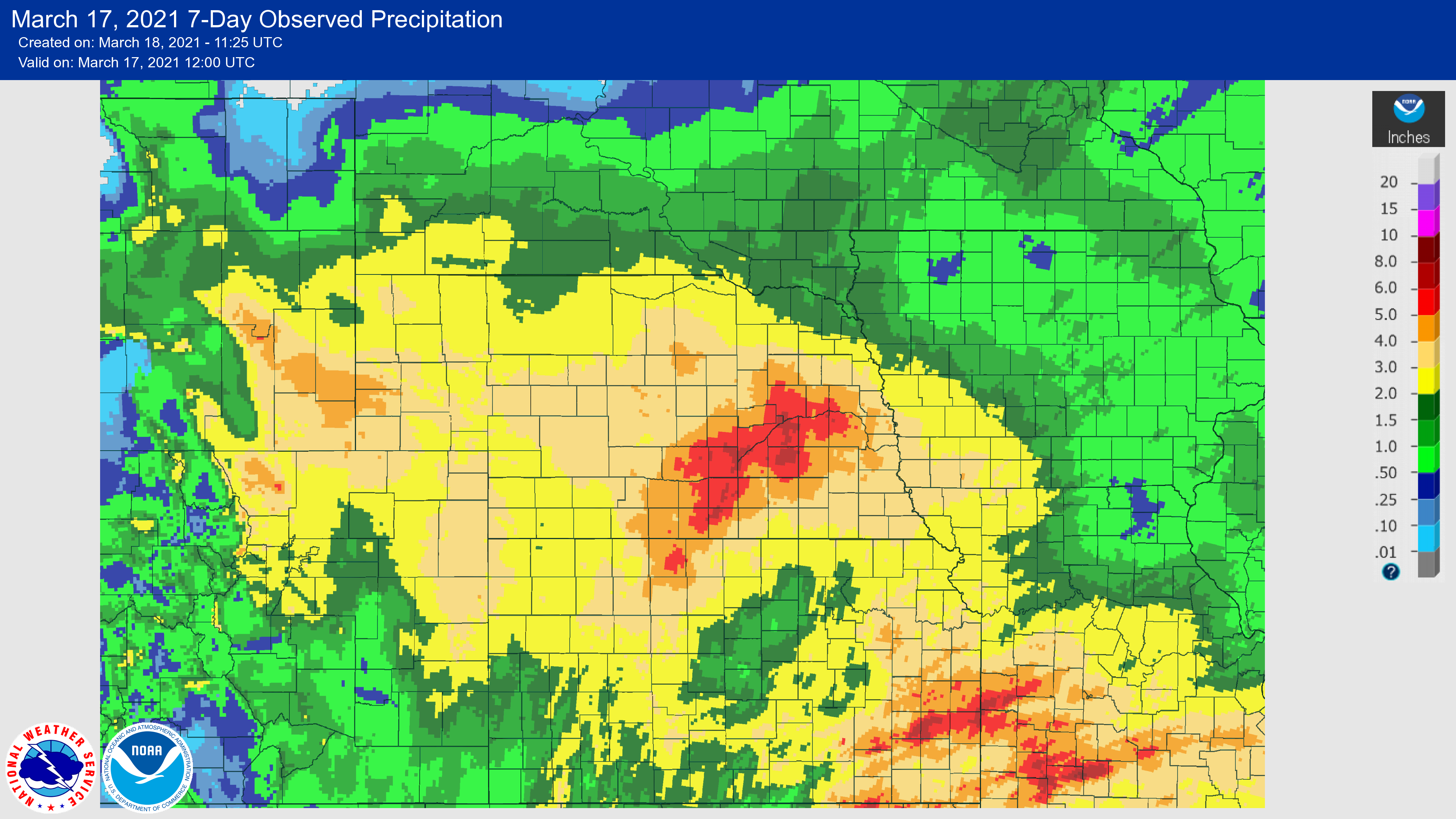 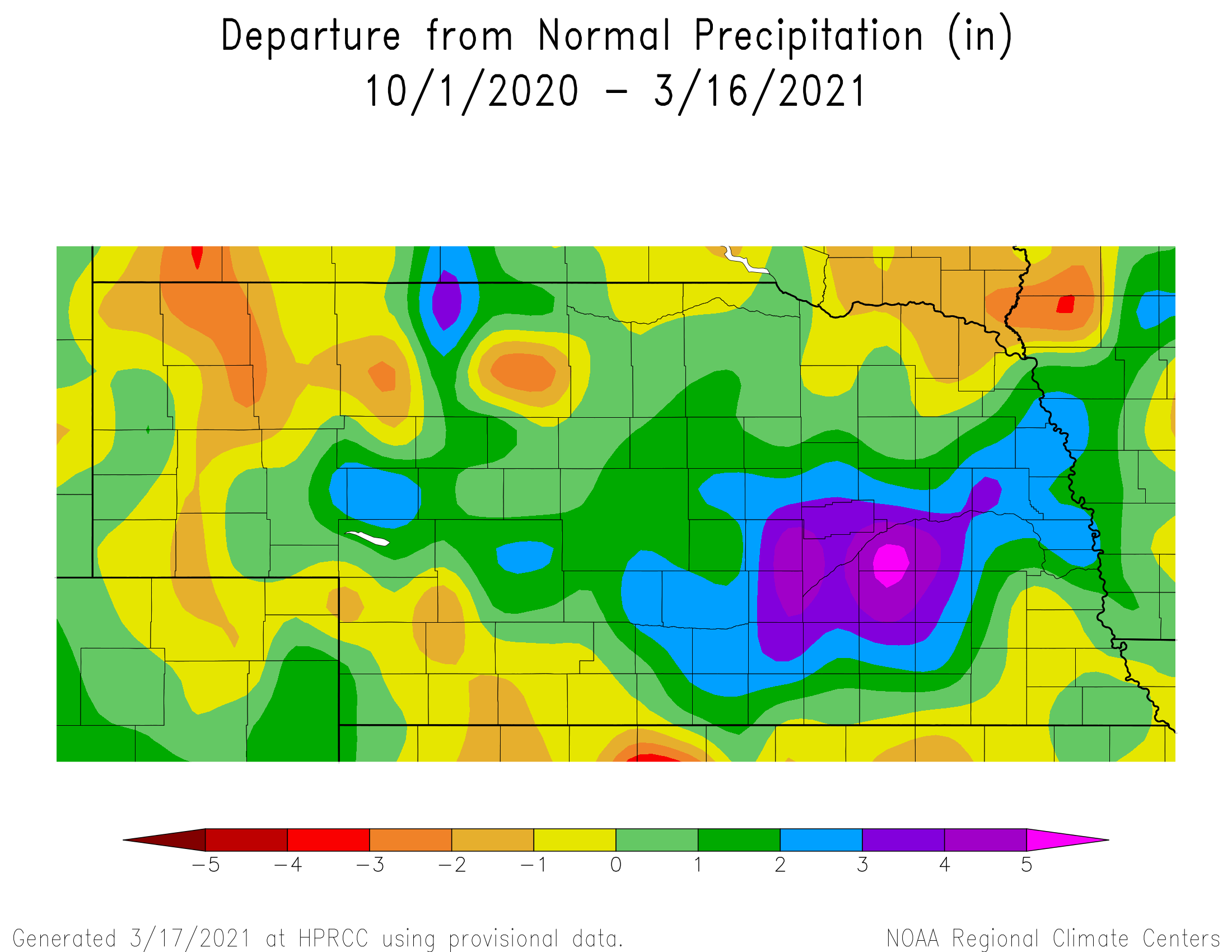 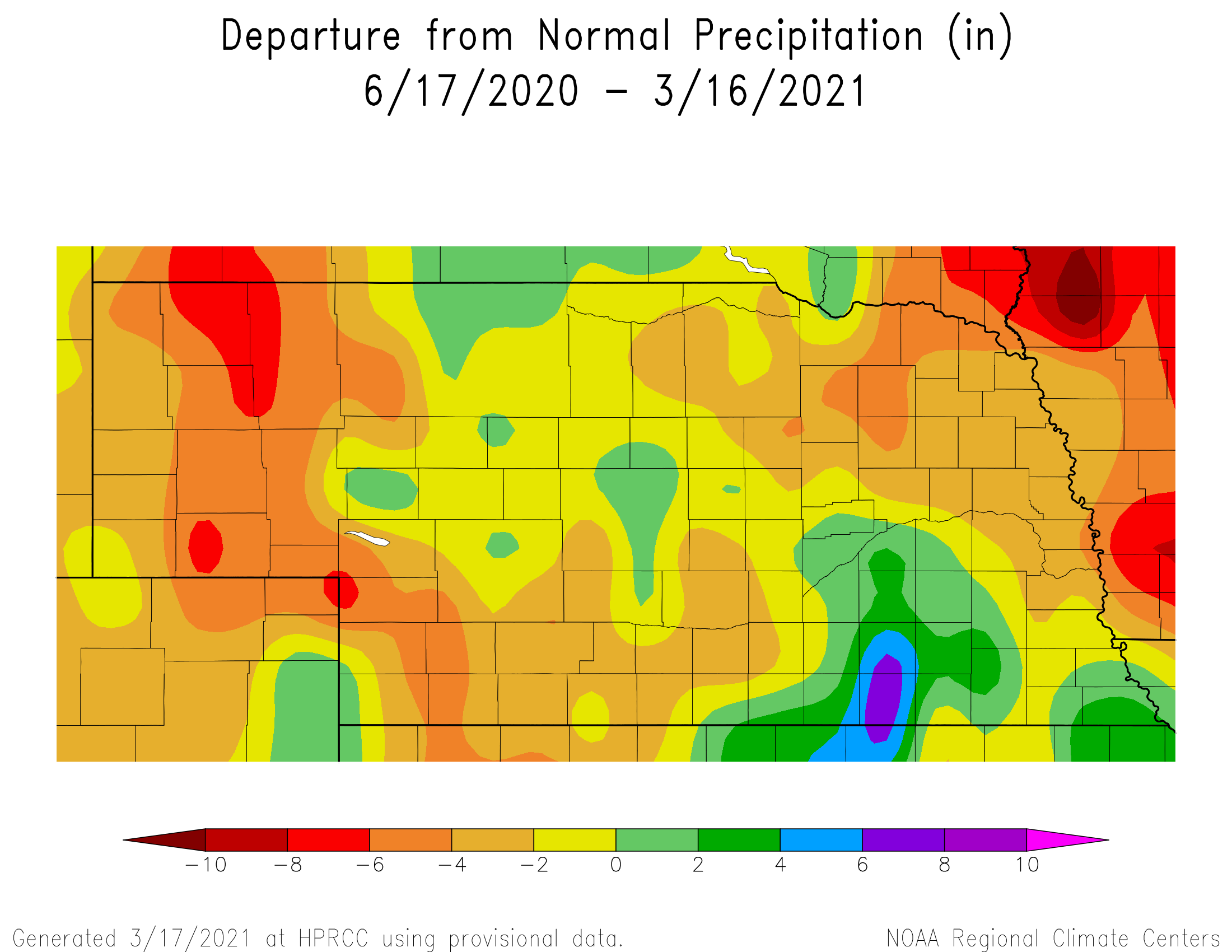 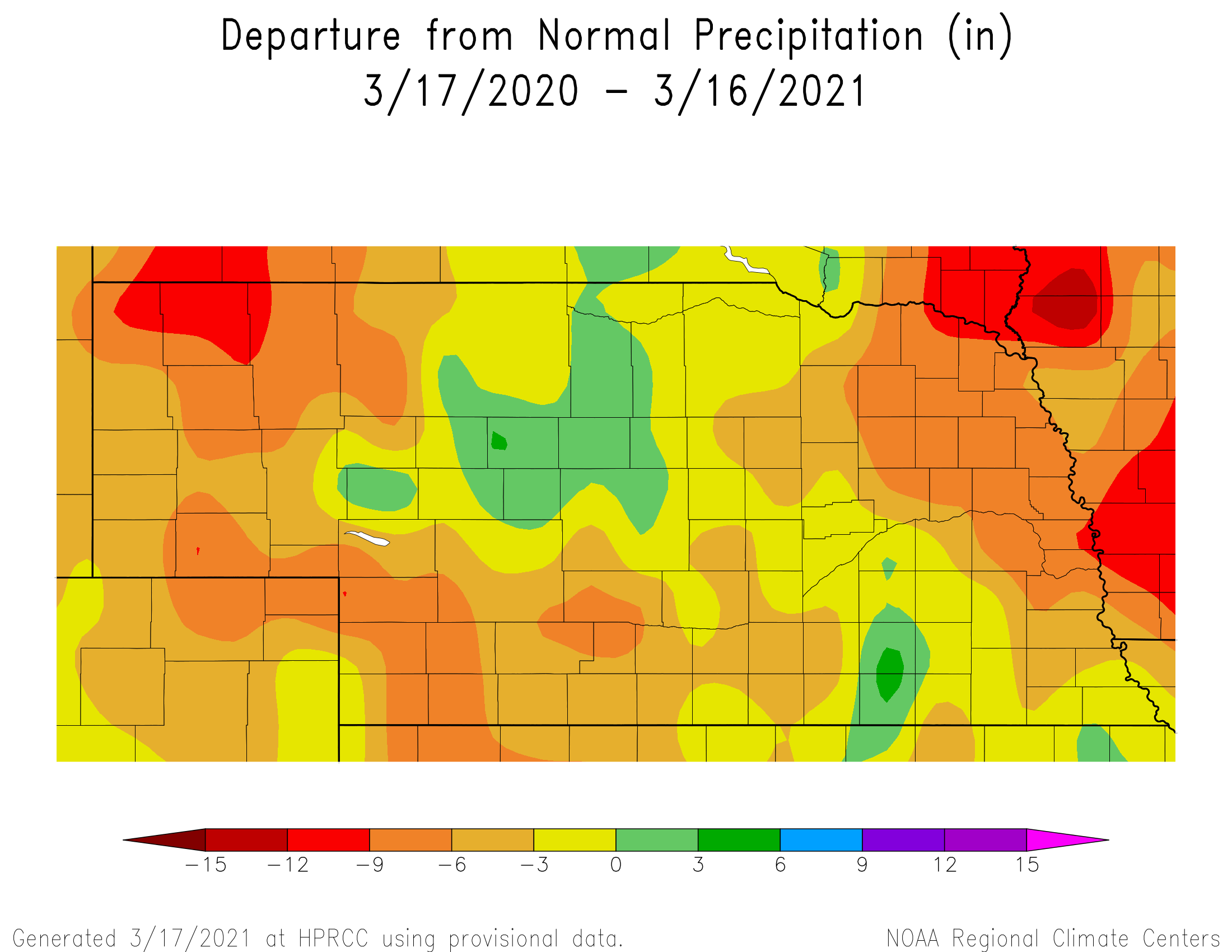 A powerful cutoff upper air low moved out of the central Rockies March 12th and slowly migrated east-northeastward through the central Plains. The slow movement of this cutoff low led to a prolonged precipitation event that produced widespread heavy rainfall across Kansas, Missouri and areas east of the Nebraska Panhandle. Figure 1 shows the total precipitation received with this storm based upon radar estimates for the continental United States.

With a strong easterly wind component at the surface ahead of ejecting low, upslope flow produced a broad area of 6-12 inches of snow over the eastern ¾ of the Panhandle. Snowfall totals increased rapidly toward the Wyoming border from Scottsbluff southward where snowfall totals of 16-24 inches have been reported. Further west and southwest along the front range of the Rockies in southern Wyoming and northern Colorado, snowfall storm totals of four feet were reported.

A cursory look at the precipitation output and coverage from this storm system indicates that it has been two years since Nebraska has experienced a precipitation event of this magnitude which covered the entire state. Ironically, this event occurred on the 2 year anniversary of the March 2019 flood event that resulted in nearly 2 billion dollars in damage statewide. Except for a small sliver of north central and northeast Nebraska, all regions of the state reported at least two inches of moisture, with parts of south central, central, and east central Nebraska receiving 4-6 inches of rainfall (Figure 2).

The largest storm event precipitation totals that have been reported so far occurred from Hastings east –northeast to Columbus and Seward. Hastings 1 ESE reported the greatest one and two day totals with 6.00 and 6.90 inches, respectively. At least 8 locations that report through NERain recorded storm totals greater than six inches. Storm totals (in inches) at a few of the National Weather Service reporting locations are as follows: Norfolk (3.30), Omaha (3.05), Lincoln (3.79), Hastings (4.75), Valentine (1.59), North Platte (3.32), Scottsbluff (2.55).

Considering the amount of precipitation that occurred with this system, widespread flooding was not an issue. There were flood warnings issued for parts eastern Nebraska, particularly in Platte and Blue river watersheds, but most rivers and streams in eastern Nebraska stayed within their banks. Numerous factors helped contain widespread flooding including no frost in the soil, rainfall spread out over a 24-26 hour period, dry subsoils from last year’s drought and two weeks of dry weather that preceded the onset of the storm.

In comparison to the March 2019 flood event, there was a significant snowpack across northern Nebraska with liquid water contents of 1-3 inches. Rainfall from that storm was in the 1-3 inches and frost depths were in excess of one foot across the northern half of the state, approaching two feet for the northern tier of counties along the South Dakota border. Additionally, there was not a period of dry weather and above normal temperatures to reduce snow depths prior to the onset of precipitation.

There can be no doubt that this storm provided significant relief from the drought conditions that began to develop last spring across the Panhandle and spread eastward as the growing season progressed. Positive moisture surpluses for the soil moisture recharge period (Oct-Apr) have finally developed over a broad area from central through eastern Nebraska (Figure 3). The greatest surpluses (3-5 inches) are centered over an area including Hastings, Grand Island, Loup City, Columbus, and York.

Almost the entire area of Figure 3 that show surplus moisture of two inches or greater is the same region that received 12-16 inches of snowfall during the late January snow event. That deep snow cover protected soils from freezing during the February Arctic blast and the abundance of surface moisture likely contributed to greater runoff then areas that missed out on the January event.

The Nebraska State Climate Office mesonet soil moisture sensors under grass show field capacity has been reached at the 25 cm (10 inch) depth statewide as of March 16th. Field capacity has been reached down to 100 cm for areas in Figure 3 that show surplus moisture of 2 inches or more. However, significant differences begin to occur at the 50 and 100 cm (20 and 40 inch) depths across the state north and west of this anomaly. Locations across the Panhandle, southwest, north central, and northeast Nebraska are beginning to show a moisture response at the 50 cm depth, but no response at the 100 cm depth. The snowpack is still melting across the Panhandle and north central Nebraska, so it is possible that some moisture response will occur at the 100 cm depth within the next week.

Significant drought concerns still exist because long term deficits remain beyond six months and they match up with those areas that have not yet realized a moisture response at the 100 cm level. Nine month precipitation anomalies in Figure 4 show moisture deficits of 2-6 inches across the northeast and 2-8 inches for the Panhandle and southwest. Surplus anomalies shrink dramatically when compared to the soil moisture recharge period and only small pockets of positive anomalies exist across north central, south central, east central, and southeast Nebraska.

Precipitation deficits for the past year depicted in Figure 5 are 3-12 inches across the Panhandle, 3-9 inches for the southwest, 3-6 inches for south central and 3-9 inches for northeast and east central Nebraska north of the Platte river. However, because annual precipitation across eastern Nebraska is about 80% greater than the western ¼ of the state, anomalies can’t be compared equally.

The most commonly drought tool, the Standardized Precipitation Index (SPI) normalizes precipitation distributions into a scale that describes precipitation anomalies in context to a stations historical distribution for the time scale analyzed. Because the SPI relies on probability distributions, it allows the Drought Monitor authors to compare locations with different climate regimes equally.

When Figures 4 and 5 precipitation anomalies are converted into their appropriate SPI values, the overall drought picture doesn’t look nearly as dire. Nine month SPI values of -1.0 to -1.5 (moderate drought) cover the Panhandle, except for the southeastern ¼ of the region. SPI values range from-1.5 to -2.5 (severe to extreme drought). Moderate drought conditions appear in small pockets of southwest Nebraska, as well as the extreme northeast corner of the state.

On an annual basis, the SPI values expand and place a more significant area of the state in moderate to extreme drought. The entire Panhandle is covered by at least moderate drought, with severe to extreme drought conditions based upon SPI values for the northwest and southeast corners of the region. SPI values point to moderate drought conditions across southwest, northeast and east central Nebraska north of the Platte River. Small pockets of severe drought at the one year scale exist around the Sioux City, Omaha, and Imperial regions.

After a brief period of drying from March 18-21, another strong trough will move out of the central and southern Rockies March 22-23. At present, the GFS model indicates that precipitation is likely across Nebraska, with heavy rainfall likely over the eastern half of the state. The most current Quantatative Precipitation Forecast (QPF) calls for 1.50-2.00 from Grand Island eastward and 0.75-1.50 inches from the southwest corner through the eastern half of the Sandhills. Further west, the QPF drops off 0.25-0.50 inches for the southeast ½ of the Panhandle to trace to 0.25 inches for the northwest half.

If this forecast is realized, there will likely be some flooding issues to deal with across eastern Nebraska where the heaviest precipitation fell earlier this week. Although some surface drying is expected before the system moves into the region, it won’t be enough to handle this next precipitation event without a substantial amount of runoff. This event will likely erase most of the remaining drought issues across eastern Nebraska for the time being.

Although the Panhandle will be on the western edge of this wet system, the GFS model is also indicating that additional precipitation activity is likely to occur during the last 5 days of the month as an upper air trough moving across the central and northern Rockies. The GFS is also hinting at a surge of Arctic on the backside of this system, so it is possible that a strong snow event will develop, possible impacting the northern 1/3 of the state.

The bottom line: Additional drought improvements are likely statewide over the next two weeks.