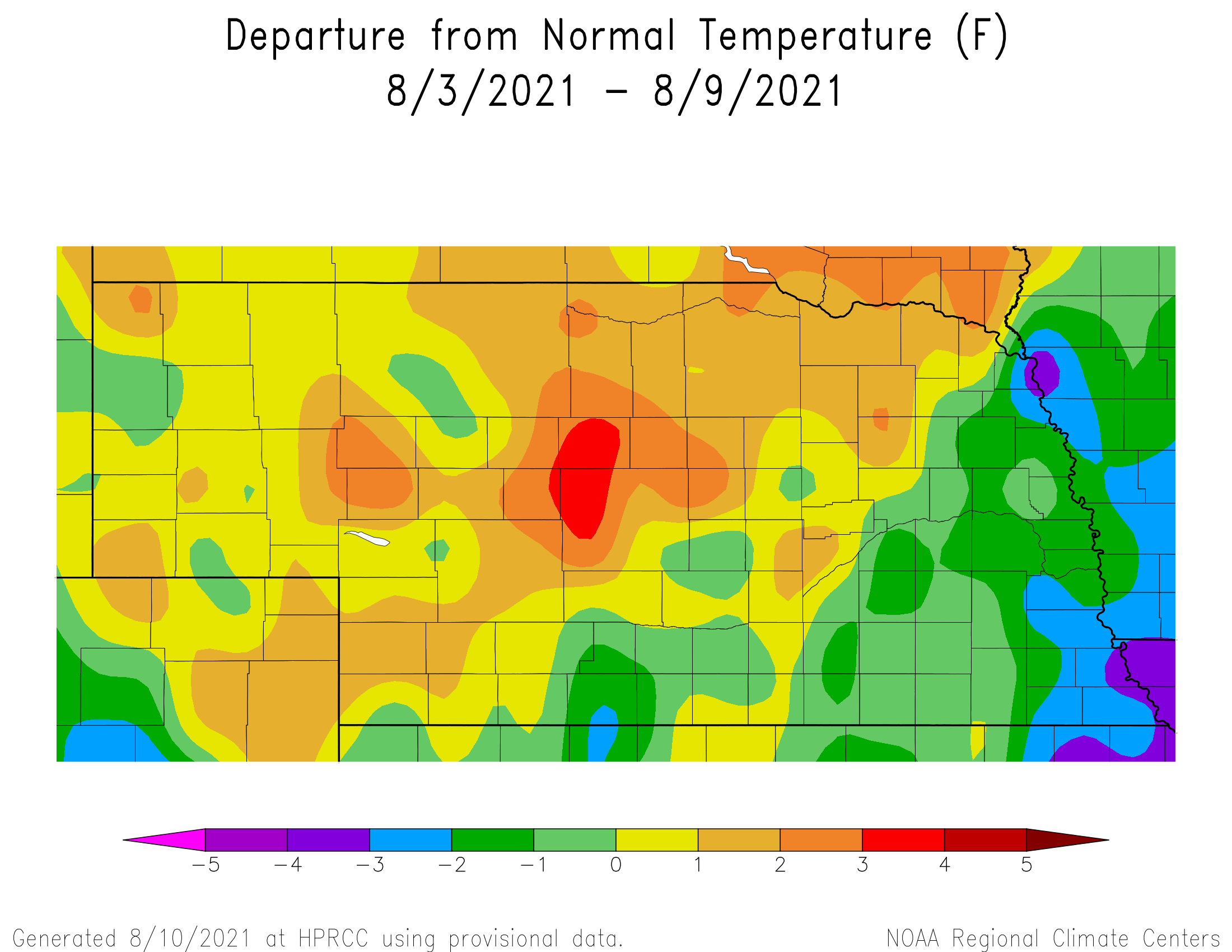 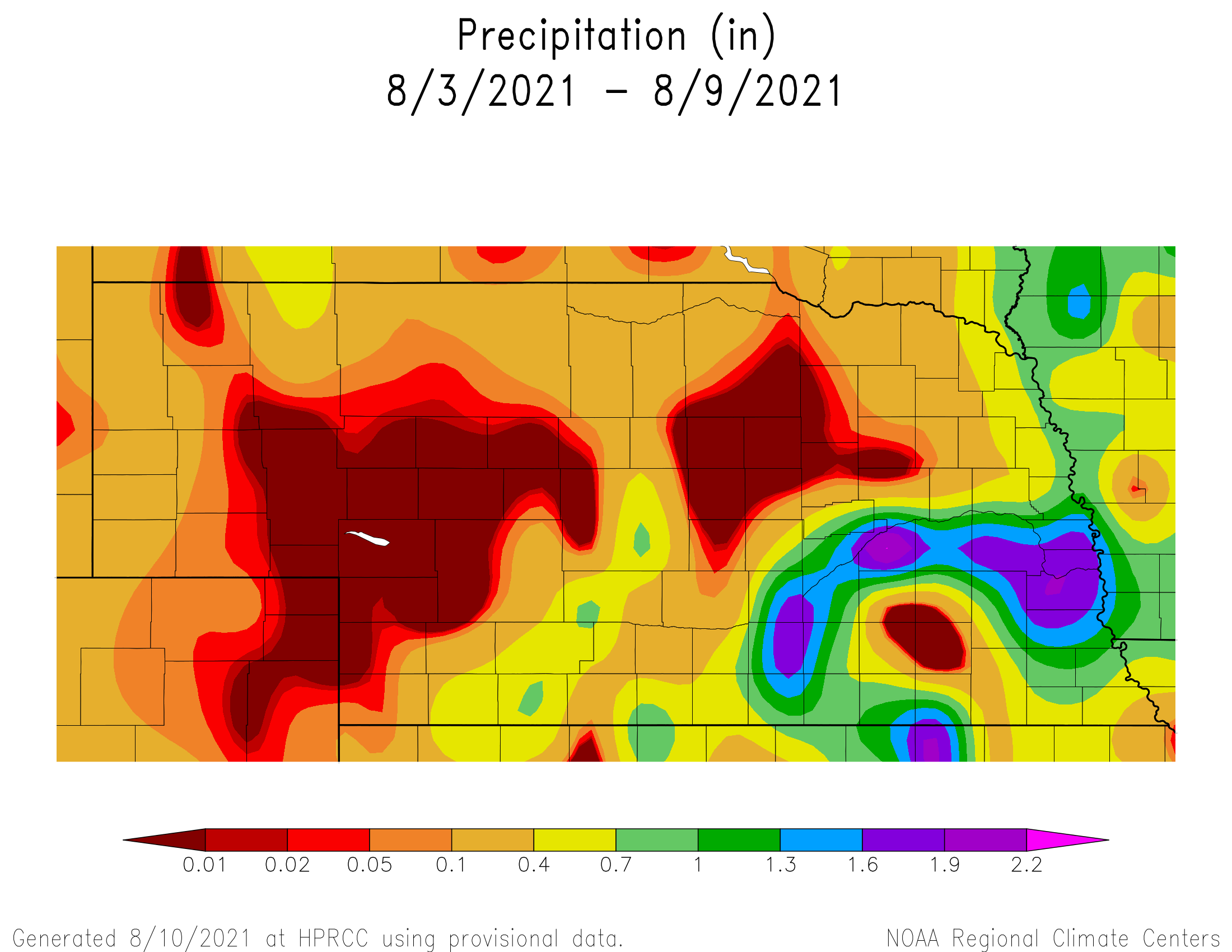 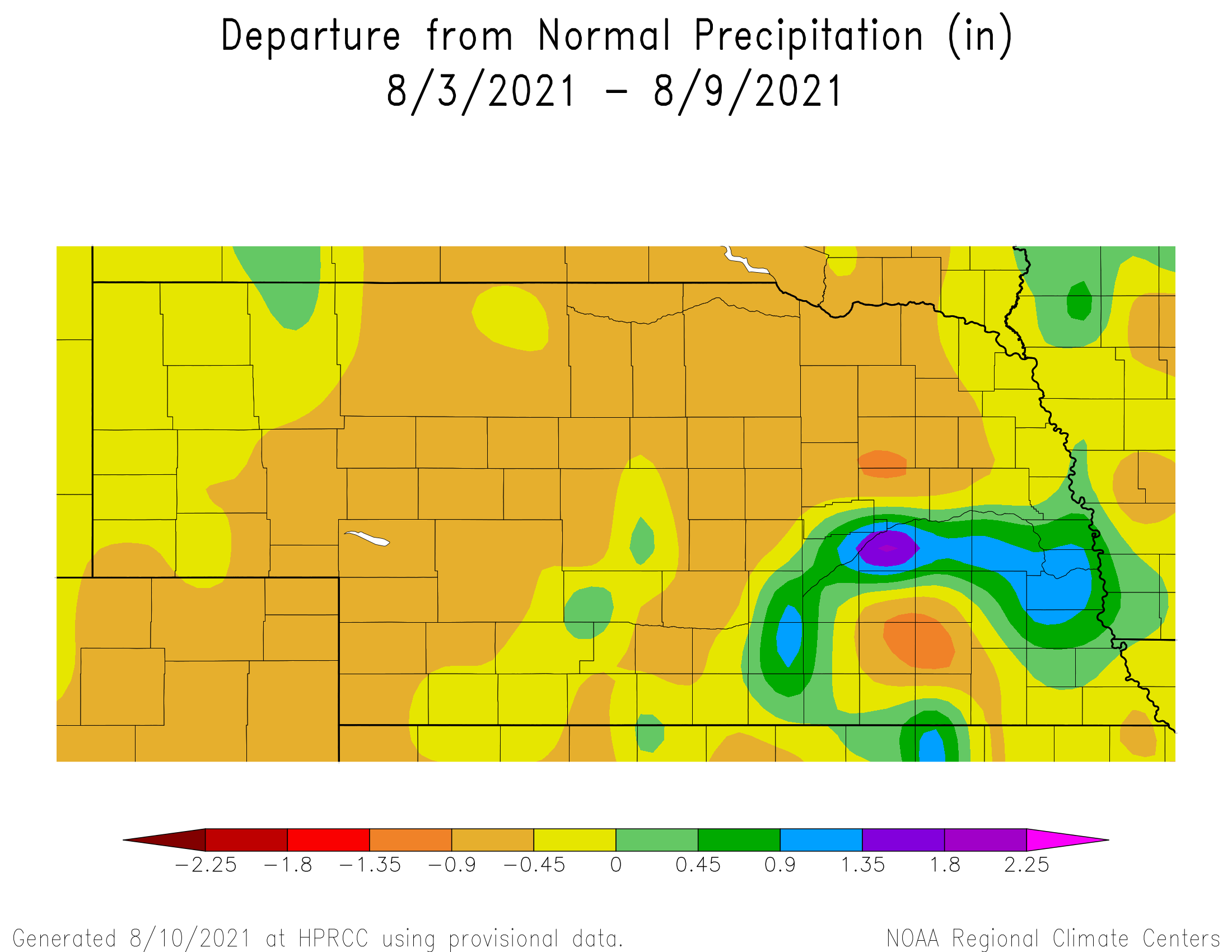 The cumulative impacts of this heat can be seen in Figure 1 which depicts temperature anomalies this past week. As has been the case for most of the past two months, the most significant above normal temperature anomalies can be found across western Nebraska. A small area of southeast Nebraska had below normal average temperatures that were primarily influenced by cloud cover and wildfire smoke reducing maximum temperature 3-5 F compared to areas that have significant air quality issues.

Precipitation reports from the NERain observers suggest that the majority of precipitation that fell this past week was concentrated in two distinct periods, August 5th and the evening of August 7th through the morning of August 8th. On August 5, 0.50-2.00 inches of moisture fell in narrow bands from McCook to Gothenburg and Hastings to Central City. A peak value of 2.08 inches fell in the Giltner area.

Strong thunderstorms developed the evening of August 7th from Grand Island to Omaha and proceeded to slowly drift southward during the overnight hours. Widespread 0.50-1.50 inches was recorded across south central, central and east central Nebraska. Precipitation across southeast Nebraska was disappointing and dropped off into the trace to half in range south and southwest of Lincoln. Unofficial reports of 4-5 inches were reported in southern Saunders county eastward through the Omaha metropolitan area leading to significant flash flooding in eastern Omaha. The greatest 24 hour total reported in this region from the NERain observers was 3.33 inches in northeast Omaha.

Although the rainfall was welcome, a substantial portion of the state received less than a quarter inch of moisture (Figure 2), with southeastern Panhandle, western half of west central Nebraska and the northwest half of southwest Nebraska failing to receive measurable moisture. There will likely be an expansion of drought conditions in this region, as well as the southern Panhandle, due to the recent stretch of heat and below normal moisture. Figure 3 shows precipitation anomalies for this past week and the vast majority of the state failed to receive normal moisture.

Warm season agricultural crops have now reached the final 30-45 days of development (location dependent) and future precipitation events will determine whether additional yield losses will occur or if crops can halt the decline in crop conditions that have occurred over the past month. At least from the GFS weather models standpoint, temperatures and precipitation do look more favorable for crop development across the entire state during the second half of August.

Nebraska Agricultural Statistics Service (NASS) indicates that topsoil and subsoil moisture ratings declined during the past week due to below normal precipitation across the western 2/3 of the state. As of August 8, topsoil moisture ratings are 11% very short, 40% short, 49% adequate and 0% surplus. The very short and surplus categories were unchanged from the previous week, but the short category expanded by 3 percentage points at the expense of the adequate rating which dropped a corresponding 3 percentage points.

Subsoil ratings as of August 8 stood at 13% very short, 44% short, 43% adequate and 0% surplus. The very short category increased 1 percentage point from the previous week. The short rating decreased 3 percentage points while the adequate category gained 2 points. Subsoil moisture improvements in the short and adequate categories reflects the small area impacted by heavy rainfall the evening of August 7th through the morning of August 8th.

Crop conditions ratings for corn remained unchanged from the previous week with 71% of the crop listed in good to excellent condition. The condition of the soybean crop declined 4 points to 76% good to excellent, while sorghum declined 7 points to 59% good to excellent. Soybean rating declines reflect below normal moisture that fell across the northeastern ¼ of the state and the southern half of the southeastern agricultural district. The decline in sorghum ratings can be tied directly to below normal precipitation across southwest Nebraska where the majority of the crop is grown.

As expected with the dryness issues across the northwestern ½ of the state, pasture ratings continue to reflect the lack of sustained rainfall during the past two months in combination with the residual impacts of the dryness last summer and fall on deep subsoil reserves (3 foot and below). NASS reports that as of August 8th pastures conditions stood at 9% very poor, 15% poor, 58% fair, 16% good and 2% excellent. Rainfall over the next 30-45 days will determine whether pastures can show some recovery this fall prior to winter dormancy.

According to the GFS model issued the morning of August 10, the jets stream through August 26 will flip from upper air ridging over the western half of the country to an upper air trough as the upper air ridge repositions over the eastern half of the country. If realized, Nebraska would be on the front side of the upper air trough and the back side of the eastern U.S. upper air ridge. This would increase the fetch of Gulf of Mexico moisture into the central and northern Plains and also increase the intensity of monsoon moisture lifting northward ahead of the slowly advancing trough.

This upper air ridge will slowly expand eastward August 16-20, which will allow the upper air trough to deepen over the western 1/3 of the country. The GFS model indicates that this trough will finally approach the central Plains August 21-23 before weakening as it heads northeast toward the Great Lakes August 24-26. As the trough weakens, the GFS model indicates that a zonal flow will set up the United States with the primary jet stream hugging the U.S./Canada border.

According to the GFS model there are chances for thunderstorm development August 11-13, across the southeastern 1/3 of the state. Precipitation doesn’t appear to be well organized, mainly scattered over areas with higher dew points and instability aloft. Instability is weak, so widespread rainfall is not expected. The GFS model is a little more robust with energy ejecting eastward ahead of a developing upper air trough over the western United State August 14-15 and it currently projects rainfall development across the western half of the state, but keeps most of eastern Nebraska dry.

After a brief lull in precipitation chances August 17-18, the GFS moves the western U.S. upper air trough across the northern and central Plains August 19-23. Current model output hints at widespread thunderstorm development across western Nebraska August 19-21 and August 21-23 across eastern Nebraska. This looks to be the most widespread event in the 16-day GFS model run and as this trough moves east of the state, a cooler and drier air mass should develop to end the month.

The Climate Prediction Center (CPC) will be issuing an updated ENSO alert for possible La Nina development later this week, along with their long lead outlooks next Thursday (19th). This two releases will play a large role in CPC’s fall and winter outlooks, which will be included in next week’s agricultural climate update. My take on CPC’s revised ENSO prediction for La Nina development by this winter and how it may influence Nebraska’s weather through this winter will be available on the Nebraska State Climate Office web-site this coming Friday (August 13).