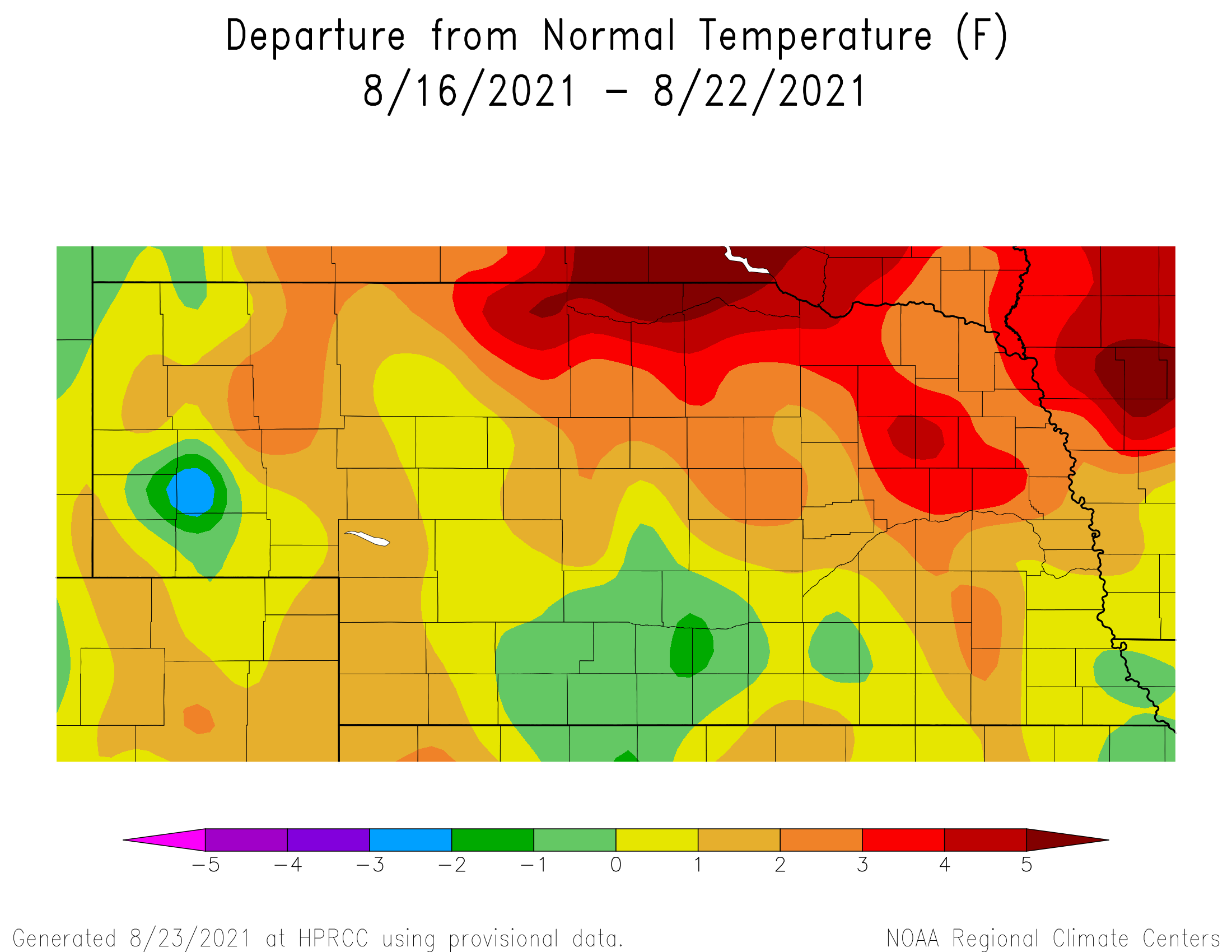 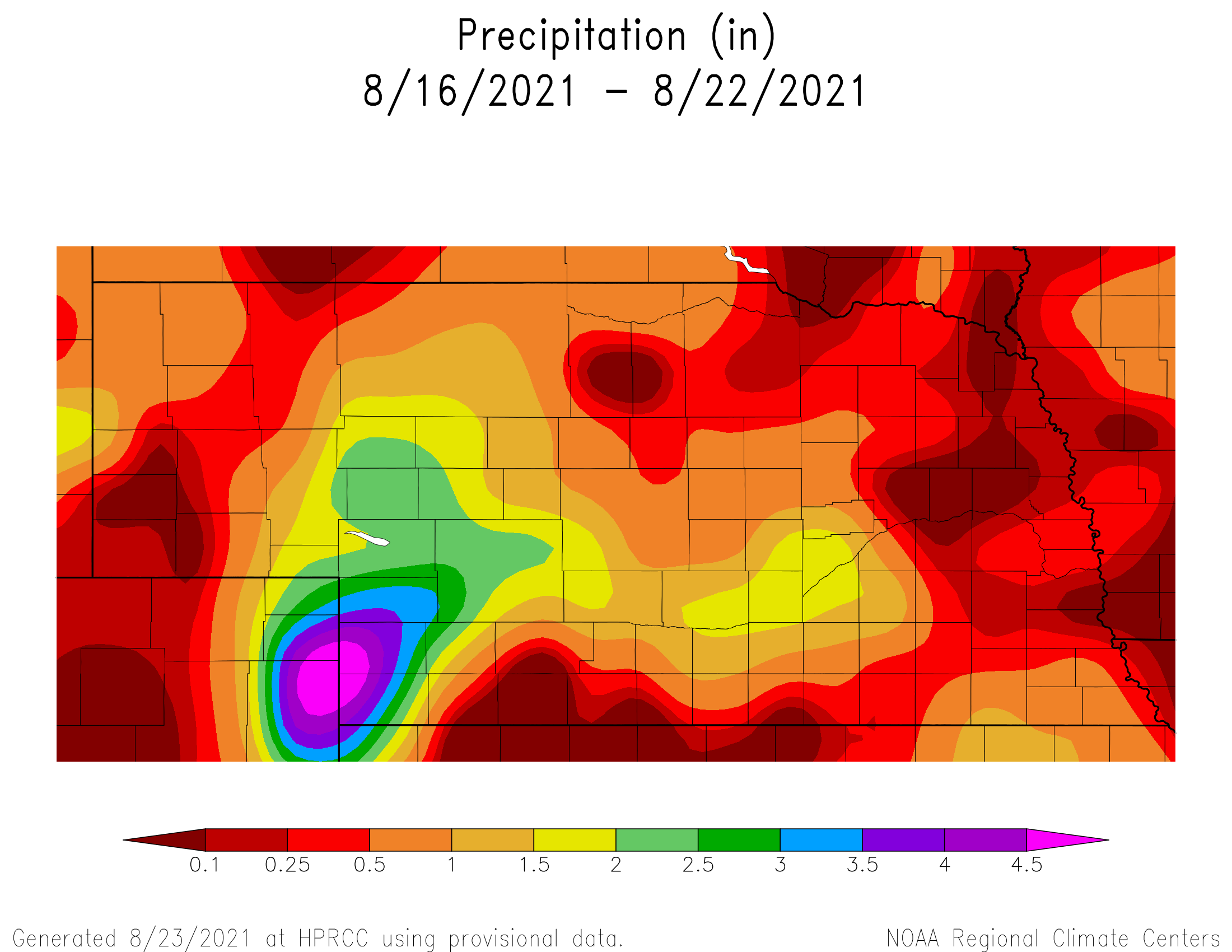 Average temperatures August 16-22 were above normal during the first half of the week as a ridge of high pressure dominated the central Plains. During the second half, an upper air trough moved eastward through the northern Plains, which brought a temporary lull to heat. Western Nebraska saw high temperatures swing from the upper 90’s to low 100’s August 16-19 into the low 80’s to low 90’s August 19-21. Hot temperatures held on one additional day across eastern Nebraska before the cold front dropped high temperatures back into upper 70’s to middle 80’s.

The brief cool down was short lived as the cold air penetration behind the departing upper air trough only made it as far southward as central Kansas. High temperatures returned to the middle to upper 90’s across the Panhandle August 22, with dew point temperatures moving into the middle 60’s to lower 70’s. Figure 1 shows the average temperature anomalies for August 16-22 and north central Nebraska eastward through the eastern Niobrara river valley averaged 3-5°F above normal. Cooler than normal average temperatures were reported across the southern Panhandle, southwest and pockets of southeast Nebraska. The remainder of the state averaged 1-2°F above normal.

Although heavy rainfall was reported during the last week, broad based coverage was limited to August 19-20 when a cold front swept east-southeast across the state as an upper air trough and associated surface cold front moved through the state. Widespread 1-2 inch totals were reported within 30 miles north and south of the I-80 corridor from Sidney to Aurora. Within this region, 3-5 inches of precipitation was recorded from Imperial to Gothenburg, as well as isolated pockets in the Kearney and Grand Island areas. The cold front was slow to exit southeast Nebraska on August 21 and scattered thunderstorms brought 0.50-1.25 inches to Kansas-Nebraska border region from Fairbury to Falls City.

There were some slight improvements in topsoil and subsoil condition ratings from the precipitation event August 19-20, according to Nebraska Agricultural Statistics Service (NASS). Topsoil moisture supplies as of August 22 were rated 15% very short, 39 % short, 46% adequate and 0% surplus. The very short category decreased 1 percentage point, the short category decreased 4 percentage points and the adequate category increased 5 percentage points. All of the topsoil moisture improvements came from a reduction in the two worst condition ratings.

Subsoil ratings as of August 22 also improved, just slightly less than the weekly changes in topsoil ratings. NASS indicates that subsoil condition ratings stood at 14% very short, 46% short, 40% adequate and 0% surplus. Both the short and very short categories declined 2 percentage points and these improvements were reflected in the adequate rating, which increased 4 percentage points.

Although rainfall was welcome across southern sections of rangeland across western Nebraska, improvements have been slow to materialize due to the lack of widespread rainfall across the Panhandle and Sandhill region during the past week. NASS reports that 10% were very poor as of August 22, while 12% were poor, 58% fair, 19% good, and 1% excellent. With the end of summer very near, pastures will need an extended period of above normal rainfall this fall to promote grass growth, build soil moisture reserves for the 2022 growing season, and offset some of the drought impacts accumulated over the last 15 months

The condition of the soybean crop as of August 22 according to NASS stood at 3% very poor, 7% poor, 21% fair, 49% good, and 20% excellent. Soybeans in good to excellent condition stood at 69%, which is a decline of 3 percentage points from the previous week. Soybeans setting pods reached 93% according to NASS, which compares to 97% last year and the 5-year average of 91 percent. The first soybean fields are beginning to drop leaves and NASS reports 4% of the crop reached this stage as of Sunday. This is behind last year’s pace of 5%, but ahead of the 5-year average of 3 percent.

After showing improvements in last week’s ratings, sorghum condition ratings declined this week but may not account for the full impacts of the August 19-20 rainfall event that brought 1-5 inches of moisture to the northern half of the southwest agricultural district where the majority of sorghum is planted. According to NASS the condition of the sorghum crop as of August 22 stood at 4% very poor, 14% poor, 26% fair, 43% good and 13% excellent. The good to excellent category declined 3 percentage points from the previous week. The very poor category expanded 1 percentage point and the poor category expanded 4 percentage points. The increases in the lowest condition rating categories came entirely at the expense of the fair and good categories which declined 2 and 3 percentage points, respectively. There was no change in the percentage of sorghum considered to be in excellent condition from the previous week, which was 13% as of August 22 according to NASS. NASS reports that 35% of the crop was turning color, which compares to 39% last year and the 5-year average of 37 percent.

During the next two weeks, it appears that Nebraska will lie at the intersection of upper air troughs moving across the northern 1/3 of the country and upper air ridging over the southern High Plains and Rocky Mountains. Therefore, the GFS model run during the morning of August 24 indicates that average temperatures will likely be above normal with several chances for precipitation that are directly tied to the movement of upper air troughs across the northern High Plains.

The first upper air trough that will impact Nebraska is currently positioned over the Pacific Northwest. The GFS model slowly builds this trough eastward and it is not forecast to reach the western Great Lakes region until August 29. Upper air ridging will hold through August 28th over Nebraska until the upper air trough swings across the northern Plains.

The main upper air trough and associated cold front will give the entire state a chance for rain and thunderstorms August 29, with some of this moisture possibly continuing for southeast Nebraska during the first half of August 30. The GFS model indicates that a zonal flow should develop August 31 through September 2 after the upper air trough moves into the western Great Lakes. A quick moving short wave trough will slide eastward through the Dakota’s on September 3, which will bring a chance for thunderstorms statewide from the evening of September 2 through the first half of September 4.

The quick moving wave indicated by the GFS model for September 2-3 may be enhanced by a tropical system now developing over the southeastern Caribbean Ocean that is projected to make landfall along the southeastern coast of Texas. The GFS model indicates this system may move moisture into the central Plains and enhance precipitation currently forecast for August 3-4. In short, if the tropical storm track advertised by the GFS model materializes as forecast, precipitation across the central Plains could be enhanced beyond what is currently being depicted.

Looking further out into the future, the Climate Prediction Center (CPC) released their September (Figures 3-4) and September – November (Figures 5-6) temperature and precipitation outlooks August 19. The most notable change in the monthly outlook is that CPC eliminates that below normal precipitation forecast that has dominated the northern Plains since this spring. CPC does show a below normal precipitation forecast for the western high Plains from Texas to North Dakota in their fall outlook, although probability levels assigned to the forecast are considerable lower than have been the past few months.