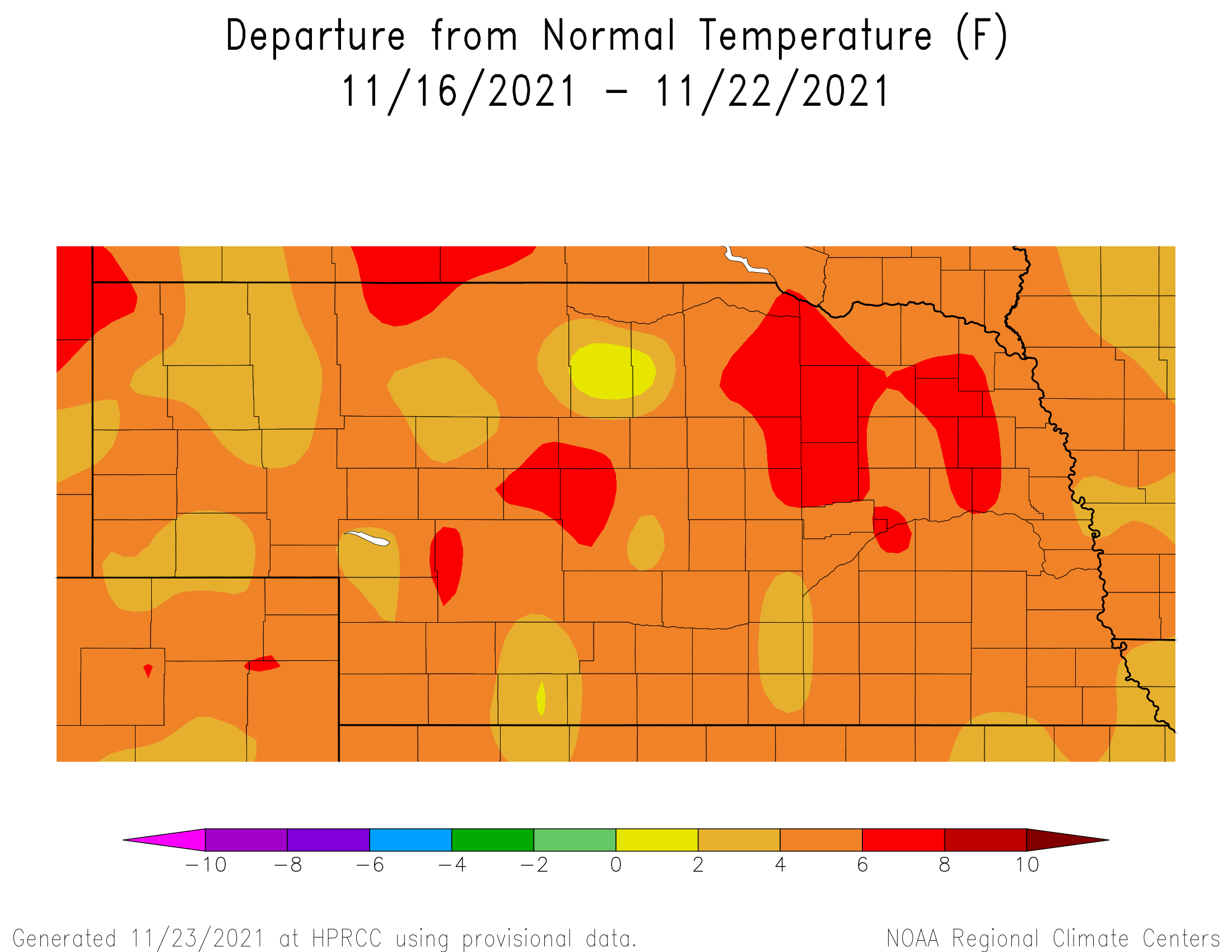 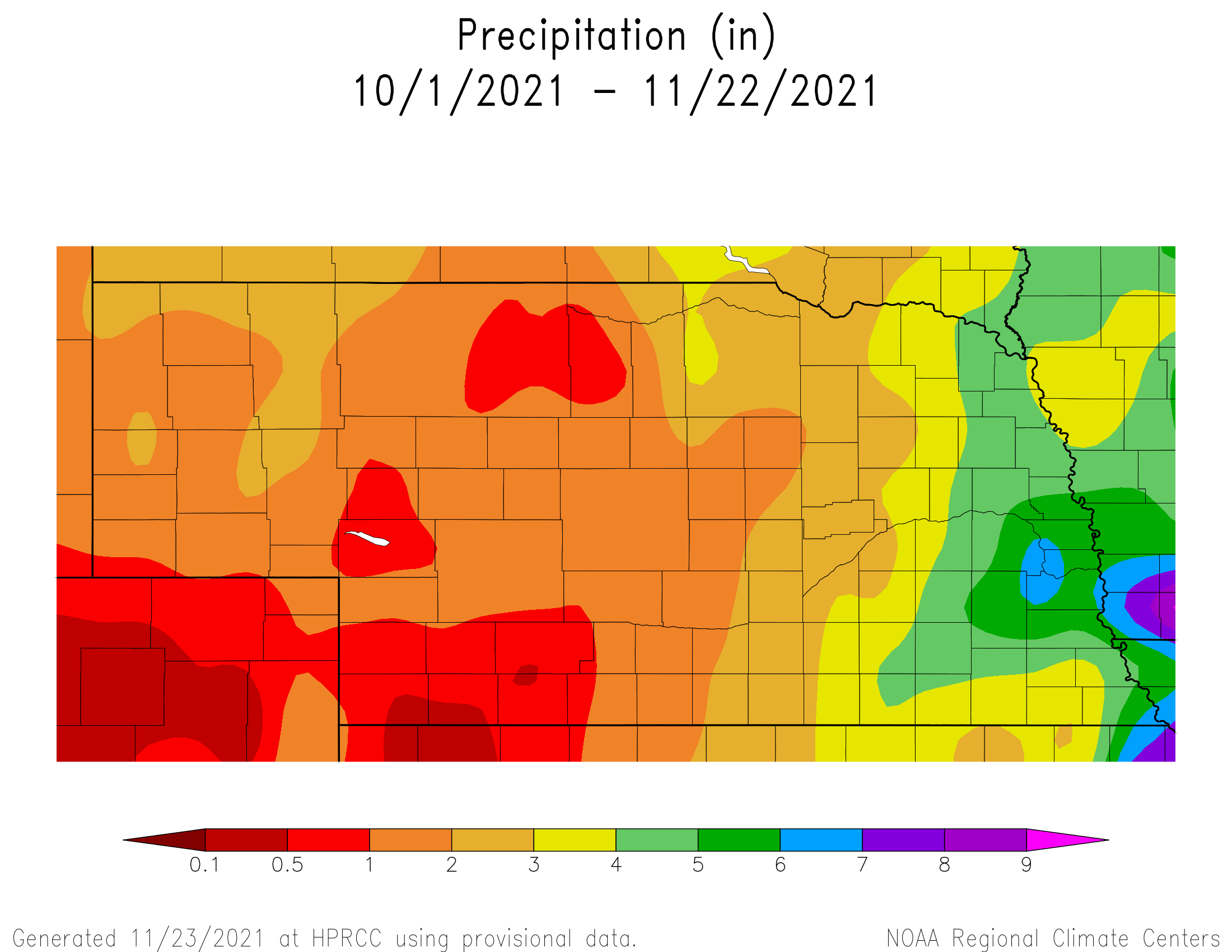 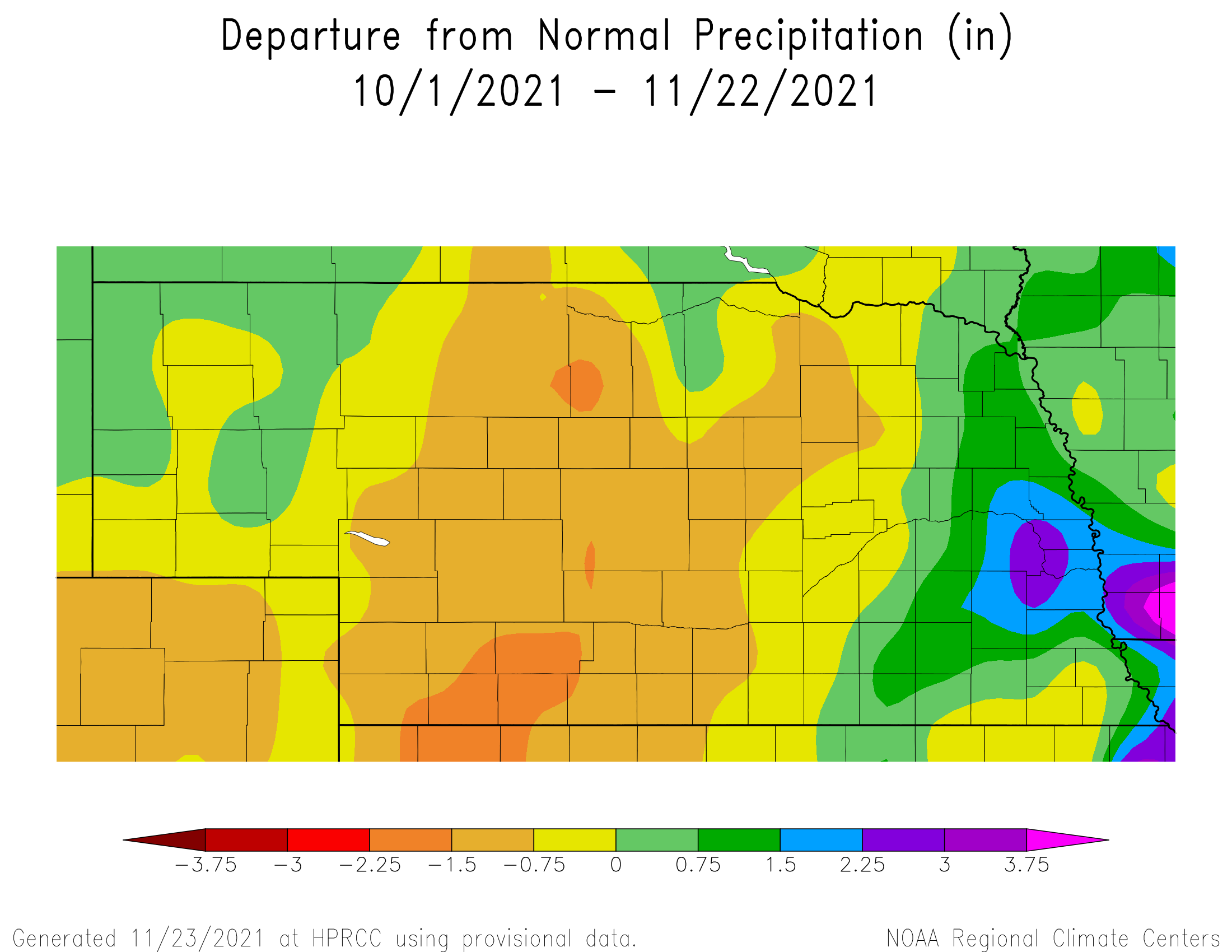 Perhaps the most interesting aspect of this last week is the very cold low temperatures observed across the western 1/3 of Nebraska the morning of November 18th when air temperatures dropped to 3 F at Alliance. Weather stations in this region reported lows ranging from the single digits to low teens. Even with these frontal passages, average temperatures for the November 16-22 period were 2-8 F above normal. The warmest locations had departures of 6-8 F above normal and included the northwest and southeast corners of the Panhandle, the eastern Sandhill region, along with a thin stripe extending from Norfolk southward to the Platte River (Figure 1).

As previously mentioned, very dry conditions were reported statewide this past week. In fact, according to the NERain observers, precipitation was confined to the 15th, 17th and the 21st. No location in the state received more than a tenth of an inch of moisture, with the largest daily value reported during the past week being 0.06 inches at Bellevue on the 21st. Of the handful of locations reporting moisture on the 15th and 17th, maximum daily totals were 0.02 inches or lower. At most locations, trace amounts were reported. No graphic of weekly precipitation was produced for this report as precipitation was too widely scattered and light to accurately depict areas of concentrated moisture.

Since we are now approaching the end of the Fall soil moisture recharge period and entering our statistically driest three months of the year (Dec, Jan, Feb), a graphical representation of moisture received across Nebraska can be viewed in Figure 2. To get a rough estimated of the moisture that production fields now hold from fall precipitation, multiply graphical values by 0.70 (70 pct). For example, if an area has received 7 inches of moisture, then approximately 5 inches of available moisture (7 x 0.70 = 4.9) should be stored in the soil profile.

According to Figure 3, most of eastern Nebraska has received surplus fall precipitation and the difference between precipitation received across central and eastern sections of the state can be directly tied to the active weather that occurred the final 1/3 of October. Fall moisture deficits across the central 1/3 of the state range from 0.75-2.25 inches. To put this in perspective, it will take 150-250% of normal winter moisture to eliminate the fall moisture deficits.

It would take an incredibly snowy winter to make up fall moisture deficits. Statistical odds place this likelihood under 20 percent based on climate history, so even with above normal winter precipitation it is likely that these fall precipitation deficits will still exist as we enter the spring soil moisture recharge period.

Harvesting of warm season crops is beginning to wrap up as Nebraska Agricultural Statistics Service (NASS) indicates as of November 21 that only 5% of the corn and sorghum remain to be harvest. The soybean harvest reached completion by the issuance of last week’s report. Weather delays were not a factor in harvest activity this past week, so harvest pace was dictated by those producers who still had crops remaining in the field.

Pastures and range conditions continue to reflect the fact that fall moisture was below normal across a majority of the grasslands across western and northern Nebraska are in some form of drought ranging from abnormally dry to extreme drought. NASS indicates that pasture ratings as of November 21 were 13% very poor, 15% poor, 55% fair, 15% good and 2% excellent.

According to the latest GFS model run issued the morning of November 23rd, precipitation chances across Nebraska look to be very weak to nonexistent through the Thanksgiving Holiday period. From the GFS models standpoint, the biggest concern will be how quickly temperatures warm after upper air troughs move through the central Plains. Two systems are of immediate concern through the end of November, a cold front moving through Nebraska on November 24th and another cold front providing a glancing blow to eastern Nebraska on November 29-30.

Each of the supporting upper air troughs that will bring quick shots of cooler air to the state are forecast to move across the northern Plains and intensify once the move east toward the Great Lakes region. This pattern is almost identical to what occurred over the past week, a brief cool down lasting 24-36 hours, then a rapid warming trend prior to the arrival of the next upper air trough. High temperatures will drop into the mid 40’s to mid 50’s November 24 and mid 30’s northeast to upper 40’s southwest on Thanksgiving.

High pressure is forecast to build back into the central Plains November. High temperatures are forecast to warm into the 50’s east to 60’s west November 26, but may drop 5-10 F on November 27th as a piece of energy rotating along the backside of the Great Lakes trough is forecast push colder air into the eastern 1/2 of Nebraska. A powerful storm entering the Pacific Northwest November 28th will push a upper air ridge over the central Plains November 29-30. High temperatures should reach the upper 50’s east and mid 60’s west on November 28th, warming into the mid 60’s east to mid 70’s west November 29-30.

The GFS model then becomes more aggressive on storm chances across the western half of the United States December 1-9, with an increasing chance of moisture across the northern half of the High Plains between December 5th and 10th. The first upper air trough will move from the Pacific Northwest to the northern Plains December 1-5 which will lead to a broad trough over the northern Plains December 4-6. At this point in time, the GFS model indicates snowfall will be confined to the Dakota’s, with northern Nebraska on the southern periphery of forecasted precipitation area. Even then, current modeled moisture output remains less than 0.25 inches of liquid equivalent moisture.

More importantly, with a broad trough developing across the northern Plains, colder air will slowly filter southward through the central Plains and high temperatures will drop from the 60’s December 1 to the 40’s or lower on December 5. The GFS model than builds this cold air mass southward into the southern Plains, which will in turn drop high temperatures into the 30’s December 6-7.

Another powerful storm enters the Pacific Northwest on December 7th and the GFS model develops this system into a powerful snow event for the central and northern Rockies by December 10th. Since this is the end of the GFS model period, confidence on the strength, timing, and storm track are low. Based upon current model movement, inclement weather would be favored December 11-13 for the central and northern Plains. In fact, based upon the current forecast track, the northern Plains and the northwestern ½ of Nebraska would be most likely to receive significant snowfall based upon the most current GFS model output.

Special Note: This will be the last weekly agricultural weather report for 2021 as harvested crop percentages have reached 95% or higher according to NASS. A monthly weather review will be issued from December through March to coincide with NASS releasing their monthly update at the beginning of the month. A second report will be issued the third week of the month (Dec – Mar) that will look at the current La Nina pattern and how it may impact weather patterns throughout 2022.