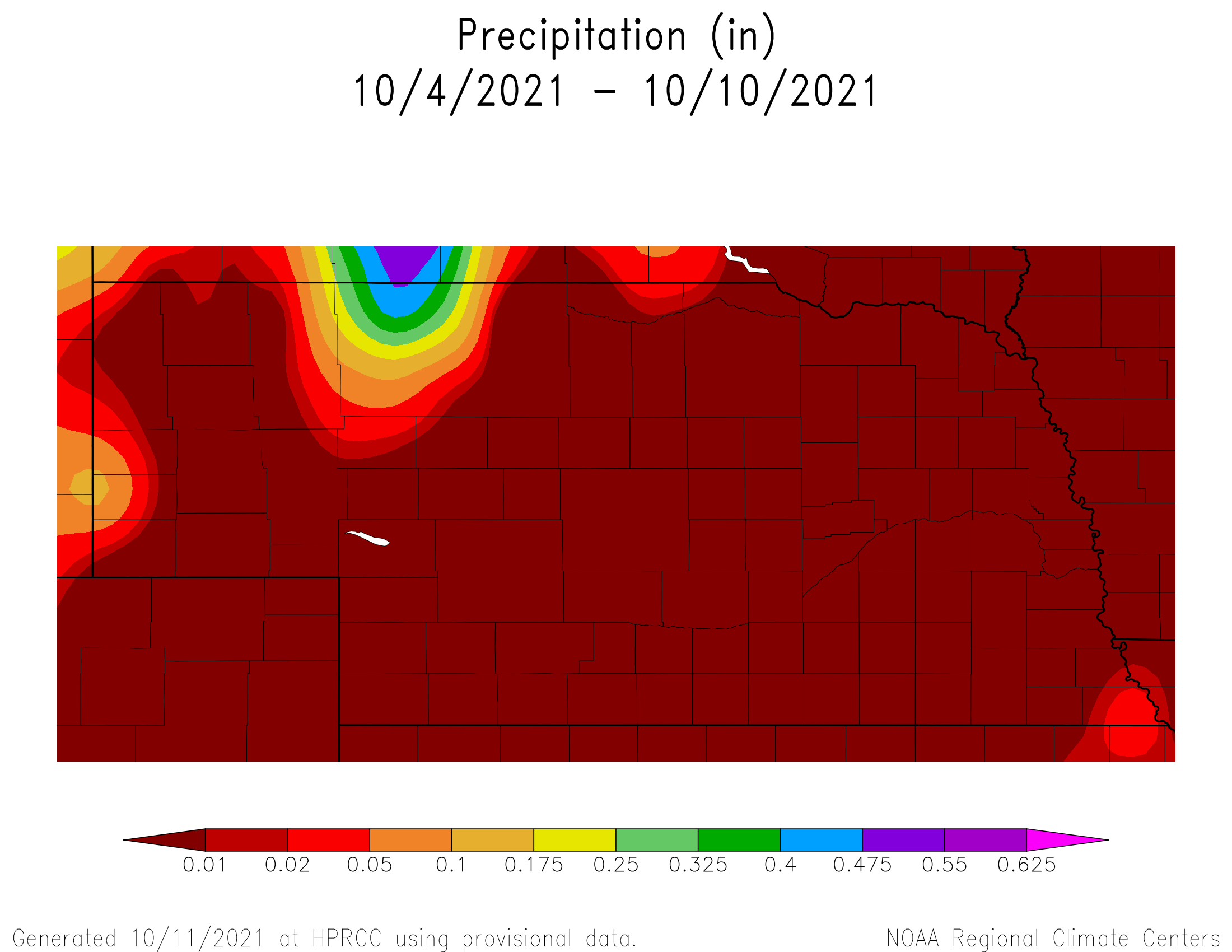 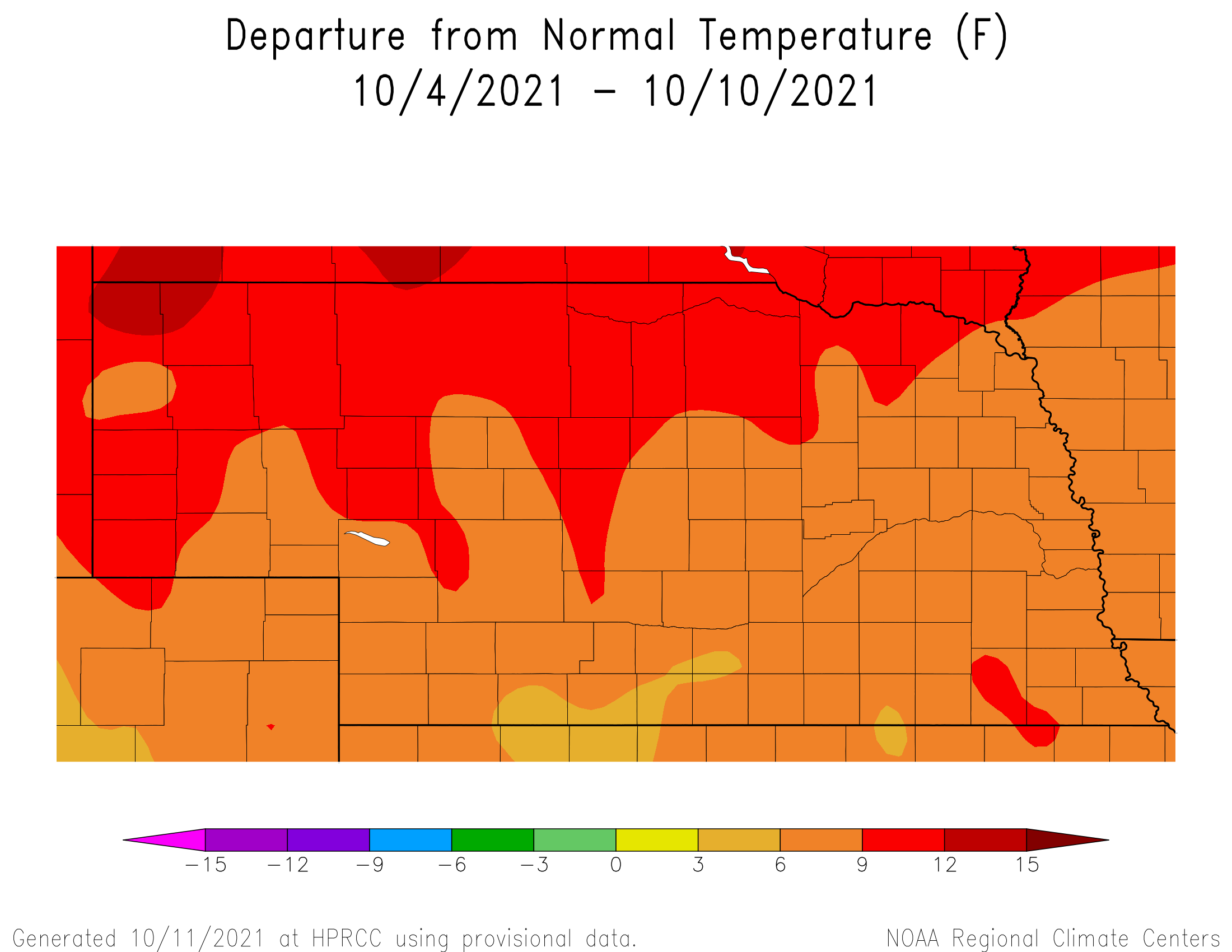 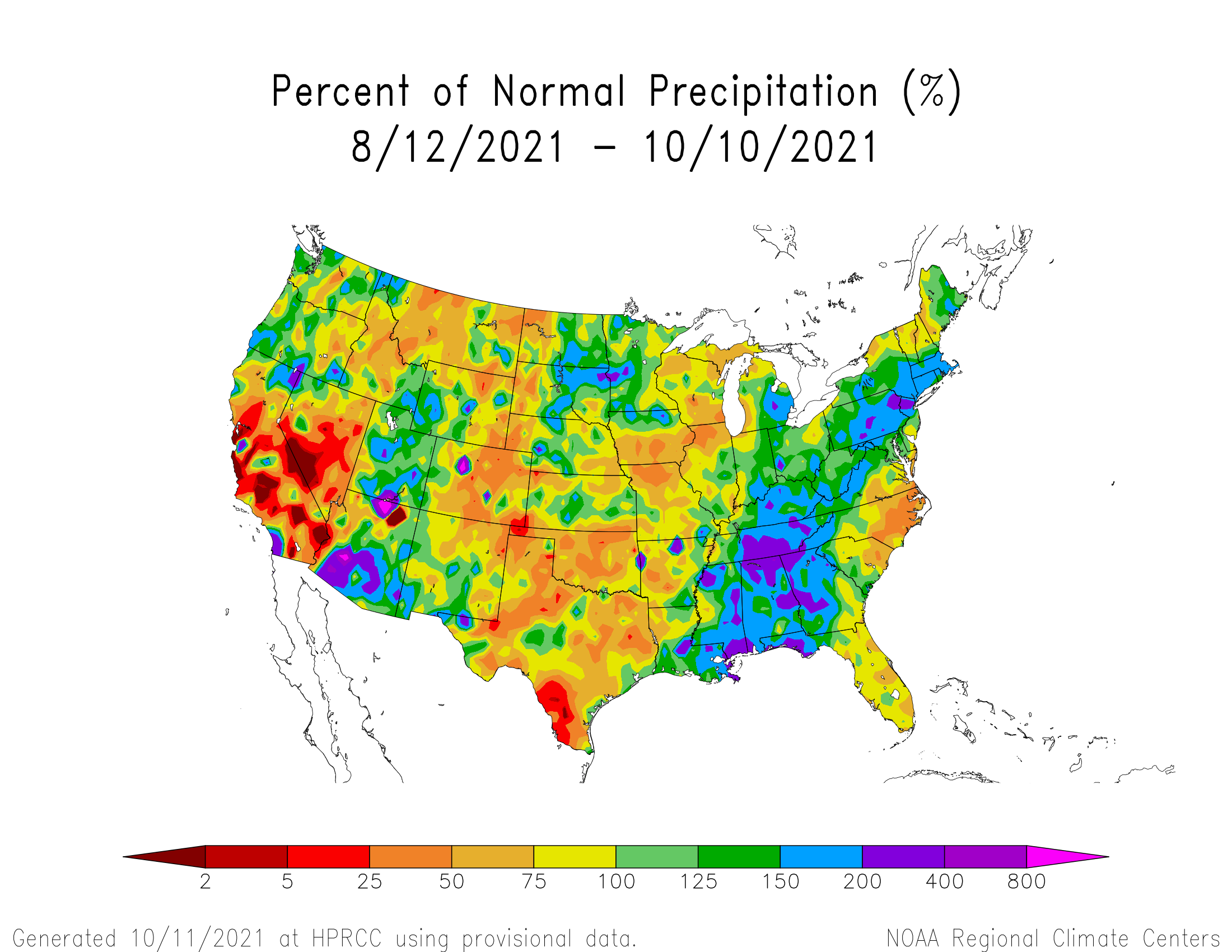 Precipitation during this past week was difficult to come by across Nebraska. Several impulses ejected out of the western United States upper air trough, with the majority of energy shifting northeast into the northern Plains region. The biggest impact felt across the state was after cold frontal passages on October 3-4, 6th, and 8th. Each of these frontal passages dropped maximum temperatures 5-10 F (location dependent), but was quickly followed by brief warm ups before the next system arrived. Relative humidity levels were on the dry side as the main moisture convergence remained north of the Nebraska. Overall, the lack of precipitation combined with a dry air mass helped harvest activity across the state, but once again proved challenging for the soybean harvest due to low moisture content during peak heating hours and the lack of a killing freeze to eliminate green stems.

Figure 1 depicts the weekly precipitation received from National Weather Service cooperative observers and volunteers with NERain. The lack of precipitation is apparent across the state and Figure 1 overstates the impact of precipitation reports across Nebraska due to graphic mapping along our borders. This edging effect appears when precipitation falls just outside of the state boundaries in comparison to little or no precipitation on our side of the border. According to the NERain network observations from October 4-10, no precipitation was reported statewide October 4-6. The only measurable moisture reported was in small pockets of the Panhandle and extreme eastern Nebraska. Maximum reported daily precipitation from NERain observers when moisture fell are as follows: October 7 (Falls City 5.5 NE and Sidney 6 N: 0.01 inches), October 8 (Gordon 8 ESE: 0.01 inches), October 9 (7 stations: Trace), October 10 (Gordon 13 NW: 0.06 inches).

September precipitation was well below normal across east central and southeast Nebraska and below normal across the western 1/3 of the state. However, compared to last year, precipitation has been more widespread since mid-August than experienced during the period in 2020 (Figure 3). For the past 60 days, a wet trend has begun to materialize across the northern High Plains region that was hard hit by the lack of above normal moisture dating back to the middle of last summer, which led to widespread D3 (extreme) and D4 (exceptional) drought conditions for most of the 2021 cropping season. Although moisture did help with late grain fill for crops that were still alive, this recent pattern change has helped get the soil moisture recharge season off to a much better start and provides a glimmer of hope that the worst of the 2021 drought impacts are now coming to an end.

The lack of precipitation during the past week resulted in widespread harvest activity across the state. The soybean harvest showed the greatest weekly gain in the percentage of the crop that has been harvested as of October 10th according to the Nebraska Agricultural Statistics Service (NASS) in their October 12th crop progress update. The percentage of the soybean crop harvested statewide as of Sunday was 60%, compared to 34% a week earlier. The crop still lags behind last year’s pace of 78% complete, but ahead of the 5-year average of 42 percent. Smaller gains in harvested acreage is likely in the next crop report due to the storm system that is expected to impact the state during the mid-week period.

The corn harvest stood at 29% complete as of October 10th and the sorghum harvest was estimated to be at 38 percent. Last week corn and sorghum was estimated at 21% complete. The slower pace of gains for these two crops is a direct result of soybean harvest activity and as producers finish up their bean harvest, the pace of future corn and sorghum harvest activity will increase barring a shift to wetter and cooler weather. Last year at this time 32% of the corn and 29% of the sorghum crop had been harvested and the current five year average of harvest activity is 22% for corn and 24% for sorghum.

Pasture ratings bucked the trend of declining conditions, likely caused by the lag time that occurs from a precipitation event to promote grass growth and the influx of cooler air compared to the widespread 90-100 F maximum temperatures observed across the western half of the state the final two weeks of September. According to NASS, as of October 10 pastures were rated 12% very poor, 14% poor, 57% fair and 16% good. Compared to the October 3rd conditions, the poor and very poor categories saw 2 percentage point decreases with a 5 percentage point gain in the fair category.

A vigorous upper air trough is forecast to eject out of the central/southern Rockies October 12 and bring rain, thunderstorms, snow, and high winds to the central and northern High Plains region. Pockets of severe weather are likely for the northern 2/3 of Kansas and southern ½ of Nebraska during the late afternoon and overnight hours. Further northwest, accumulating snowfall is expected for eastern Wyoming and western South Dakota. Snowfall may exceed 12 inches in the favored high mountain regions of north central Colorado and south central Wyoming. Total storm precipitation with this system is forecast to range from 0.25 to 1.25 inches across Nebraska (higher in areas of strong convection), with the lighter end of totals forecast for the southern 1/3 of the state where a dry slot may develop. Precipitation totals may exceed two inches across the eastern half of North and South Dakota, along with the western ½ of Minnesota.

There may be some lingering shower activity the morning of October 13th across the eastern ¼ of the state as the main upper air low moves toward the western Great Lakes. There are signs that an impulse may develop and move northeast on October 14th on the southern flank of this upper air trough, which would place extreme southeastern Nebraska on the northern flank of the forecasted precipitation shield. This feature is also forecast to pull Canadian air into the northwestern half of Nebraska and produce scattered frost/freeze conditions the morning of October 15th. Currently, the GFS model doesn’t produce frost/freeze conditions across the southeastern ½ of the state.

As the upper air trough shifts toward the northeastern United States, high pressure aloft will build into the center of the country as another upper air trough pushes into the Pacific Northwest. The most current GFS model issued the morning of October 12 indicates that this trough will move across northern North Dakota October 18-19 and cut off over Minnesota and Wisconsin. The low is forecast to broaden out and bring cooler air to eastern Nebraska October 20-21. The GFS late last week was directing this trough toward the northern and central Plains, but has since shifted it east of that forecast position. If eastern Nebraska is to see a season ending freeze, it will be the result of this upper air trough diving southward earlier than currently projected. Otherwise, the next system that has the potential to pull cold Canadian air southward is not expected to occur until the final days of October, at the earliest.

Therefore, once the upper air low over the western Great Lakes region begins to shift eastward, high pressure is forecast by the GFS model to dominate the central 1/3 of the country through October 27 and high temperatures will return to the 60’s to low 70’s October 23-28. The next potential precipitation event for Nebraska is currently advertised by the GFS model to occur October 28-30 in response to an upper air trough moving through the western United States October 25-27. Since this event is forecast at the end of the current GFS model run, interpolation of the systems forward speed would put system on our doorsteps just in time for Halloween.