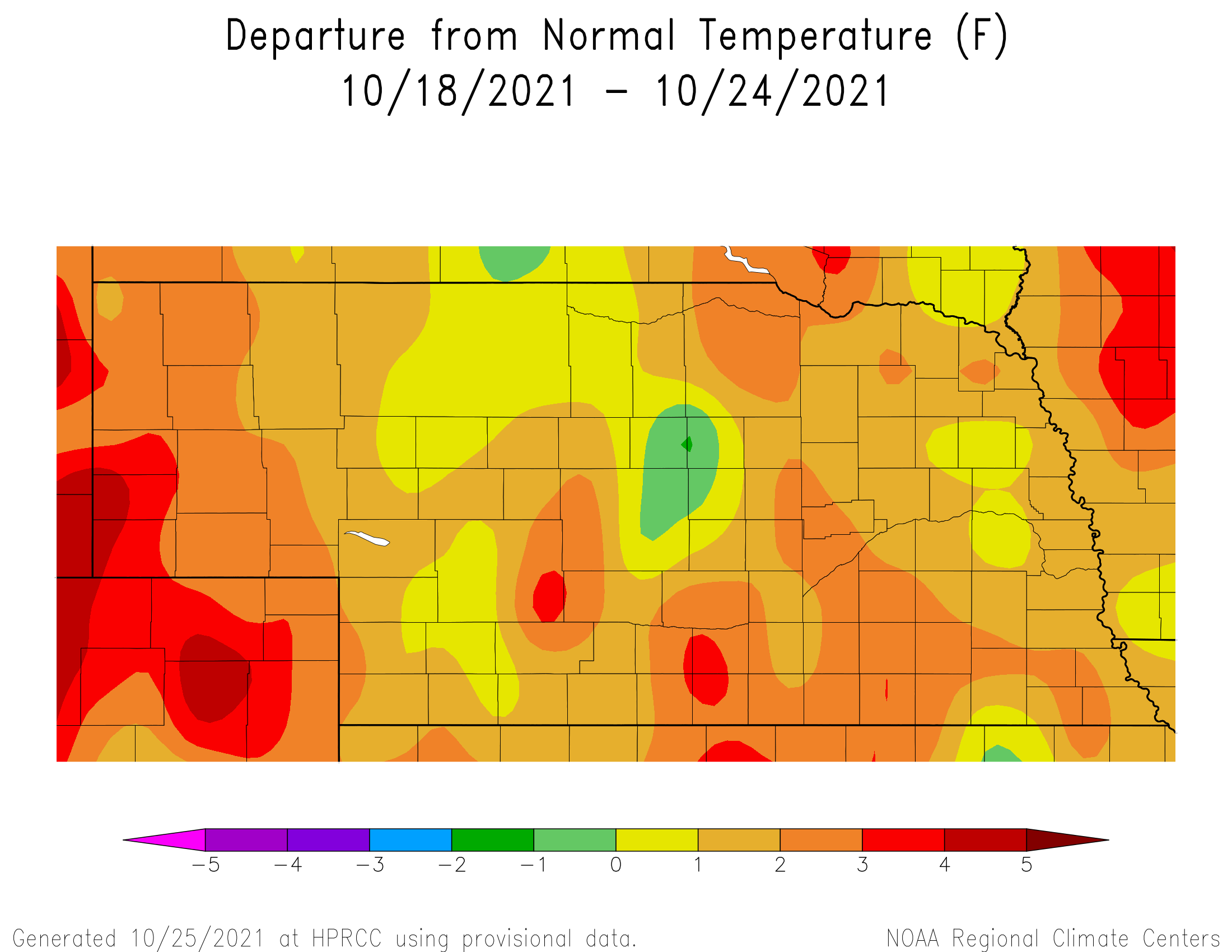 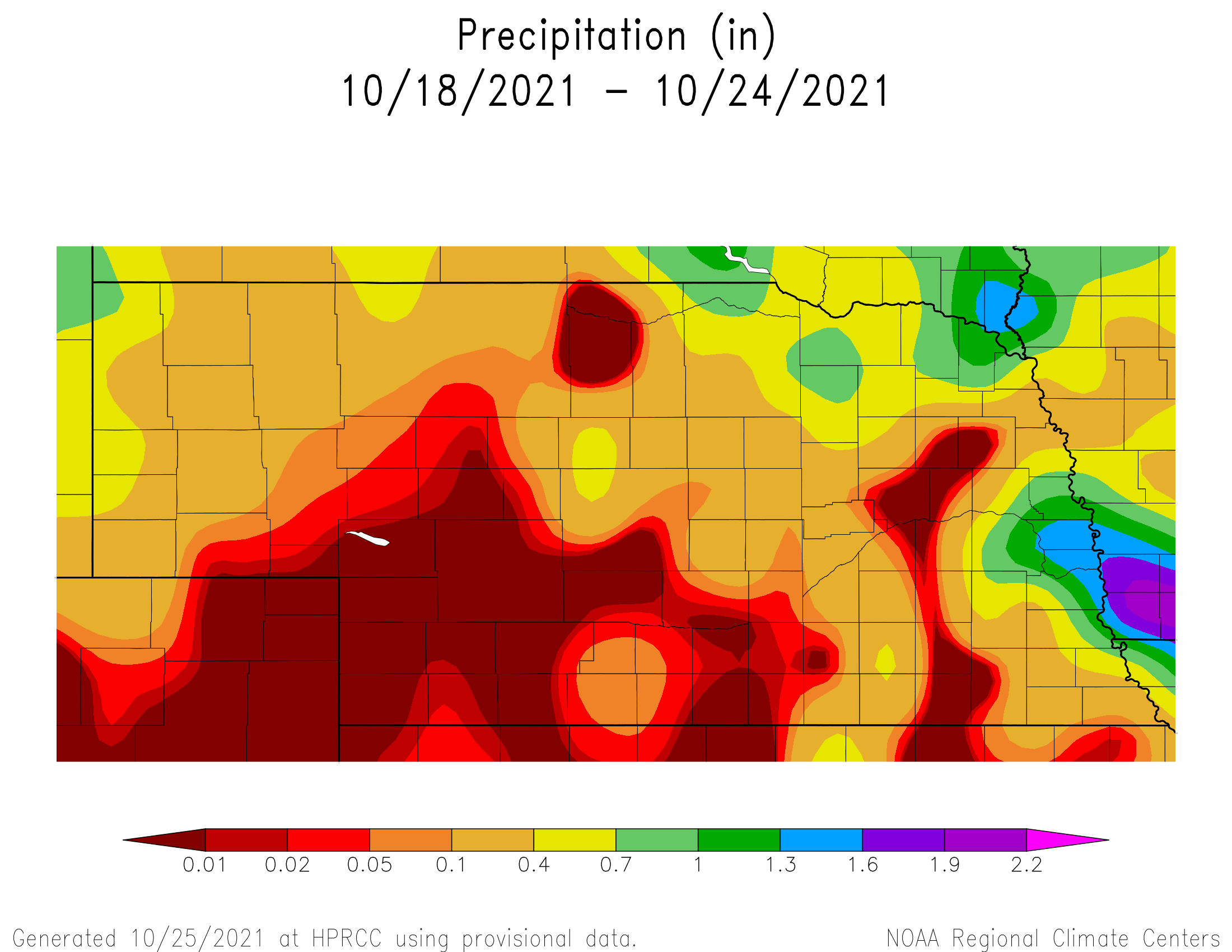 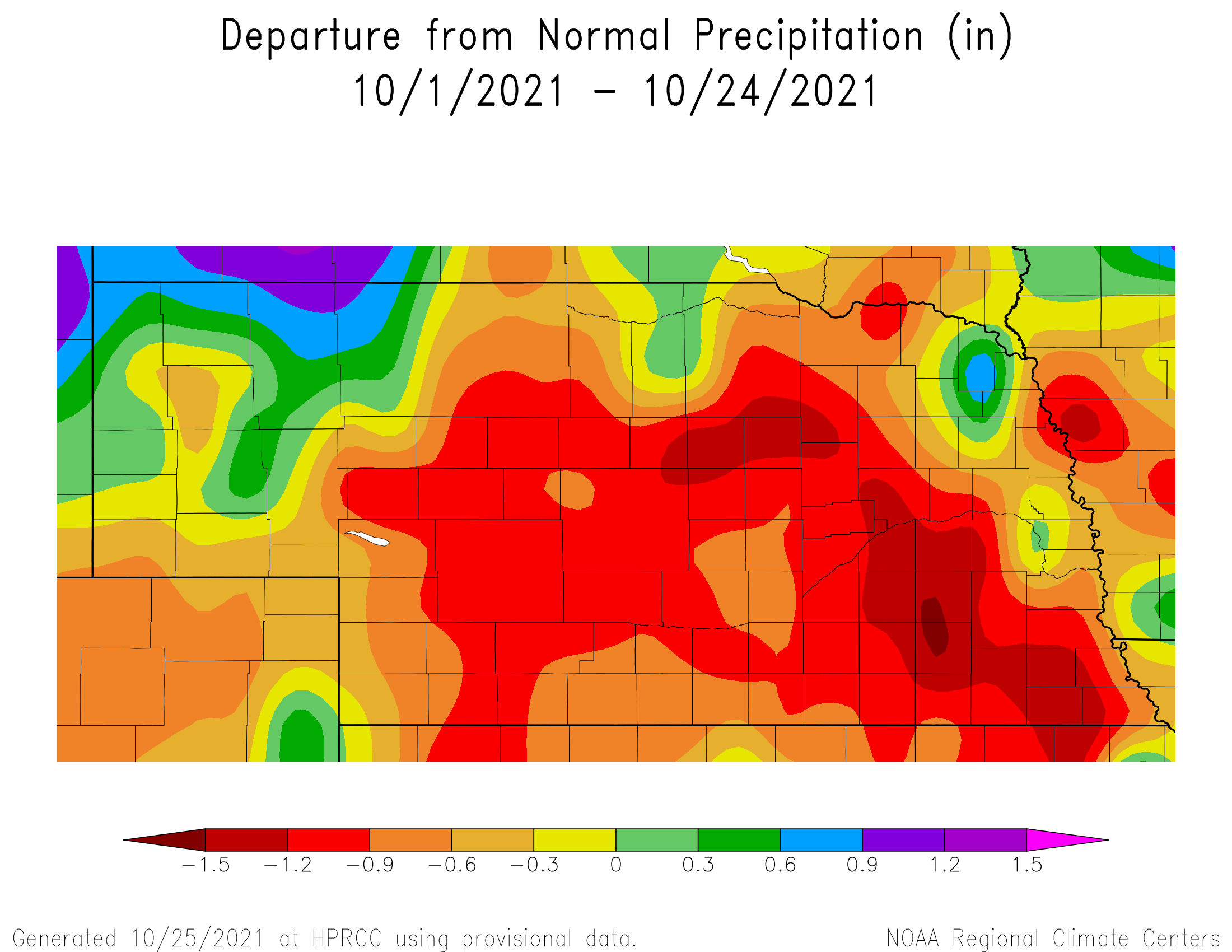 Two upper air troughs crossed the state from October 18th through the 24th, resulting in a rollercoaster ride for air temperatures. Statewide maximum temperatures reached the upper 70’s to low 80’s west October 18-19, with low to mid 70’s east. As an upper air trough ejected out of the western United States, it was able to pull slightly colder air out of southern Canada into the central Plains. High temperatures behind this system dropped 10-15 F with widespread high temperatures in the upper 50’s north to upper 60’s south October 20-21.

As the trough moved northeast of Nebraska, cold air was pulled southward into the central 1/3 of the state resulting in widespread frost/freeze conditions. Further east, scattered frost/freeze conditions were reported west of U.S. Highway 81. The core of the cold air moved over extreme eastern Nebraska October 22 bringing a season ending hard freeze (low temperature 28 F or lower) to areas north of a line from Omaha to Lincoln. Southeast of this line, minimum temperatures ranged from 30-35 F, resulting in light to moderate frost conditions, but no hard freeze.

The most significant moisture event this past week occurred across eastern Nebraska on October 24th. Preliminary rainfall totals through the sunrise hours of the 24th indicated the eastern half of the state had received trace amounts up to several inches from thunderstorms that were moving northeast ahead of the surface warm front. The vast majority of moisture fell during the daylight hours, with localized flash flooding occurring across parts of southeastern Nebraska. These precipitation totals will be reflected in next week’s crop report.

Even with two upper air troughs crossing the central Plains region during the past week, Nebraska Agricultural Statistic Service (NASS) estimated that there were 5.9 days suitable for field work for the week ending October 24th. It should be noted that most of the precipitation that fell this past week occurred on October 24th and will be reflected in next week’s crop progress report of conditions through October 31.

The only other widespread precipitation event occurred from the morning of October 19th through the morning of October 20th and impacted the Panhandle, north central, northeast and central Nebraska. However, the vast majority of observations reported rainfall totals ranging from 0.10 to 0.25 inches. Locally higher totals ranging from 0.25 to 0.75 inches were reported in the Scottsbluff, Chadron, Anselmo, Taylor and Concord areas. Most areas south of the I-80 corridor failed to receive measurable moisture as the system responsible for this precipitation event remained north of the state.

Harvest activity continued to remain ahead of the 5-year average for warm season crops, but will likely stagnate this week across the eastern half of the state due to the October 24-25 precipitation event and the expected moisture event expected to drop an additional 0.50-1.50 inches of moisture on October 27th. As of October 24th, NASS indicates that 88% of the soybean crop, 60% of the corn crop and 72% of the sorghum crop had been harvested. The 5-year average for the percent of crop harvested on by October 24th is 73% for soybeans, 77% for corn and 54% for sorghum.

With the vast majority of the moisture received this past week occurring right after the crop reporting deadline, soil moisture estimates for topsoil and subsoil ratings saw little, if any movement. Next week’s report should contain significant changes as widespread 1-4 inches of moisture across the eastern half of the state should improve topsoil/subsoil conditions given that warm season crops water demands are over.

As of October 24th, NASS indicates that topsoil conditions are rated 8% very poor, 32% short, 58% adequate and 2% surplus. Subsoil moisture conditions are rated 12% very short, 41% short, 45% adequate and 2% surplus. The only changes to topsoil and subsoil moisture ratings from last week was a reduction of 1 percentage point in the adequate rating for topsoil and subsoil conditions, while increasing the surplus category 1 percentage point.

The final wheat assessment of 2021 that will be reported in this weekly agricultural update issued by NASS indicates that 97% of the crop had been planted as of October 24, which is equal to last year and the 5-year average. Emergence is estimated to be 84%, compared to 82% last year and the 5-year average of 86%, NASS wheat crop conditions were estimated to be 2% very poor, 9% poor, 30% fair, 51% good and 8% excellent.

The past two weeks have been active across the state, a far cry from a year ago when precipitation events were far and few between. Once we get past the next 24-26 hours, the next two weeks look to be more subdued in regards to precipitation chances. However, the system slated to move through the state October 27 is projected to bring widespread 0.5-1.50 inches of moisture to the eastern half of the state, with the highest totals expected to occur across counties on the eastern Nebraska border. As this system moves east of the state, cool Canadian air will filter in behind the system. High temperatures will cool from the upper 50’s to middle 60’s October 26 into the mid 40’s to mid 50’s by October 29th.

A trough moving along the south central Canadian border October 29-30 will deepen over the western Great Lakes and expand west ward. This will help develop an Alberta type clipper system across the northern Plains on October 30th and this Arctic air is forecast by the GFS model to begin moving through Nebraska October 31 – November 1. Currently, the GFS indicates that moisture will light with this system (< 0.25 inches of moisture), but the type of precipitation remains in question. If the system passes through the state during the overnight hours, light snow accumulations can’t be ruled out across the western ½ of the state. Even if snow fails to materialize, it will be a cold rain with high temperatures confined to the upper 30’s to mid 40’s.

If the GFS model is correct, dry conditions will develop across the central Plains November 2-8 as high pressure builds into the central 1/3 of the United States. High temperatures will warm from the 40’s November 2 into the upper 50’s northeast to mid 60’s southwest November 6-8. Alas, another upper air trough will begin to develop across the western 1/3 of the country November 7 and slowly move eastward. The GFS model indicates that this trough will move into the central United States by November 9 and deepen.

There remains considerable uncertainty with the precipitation that will form with this trough and where it will fall. Currently, the GFS model keeps all of the energy just south of the state and the primary precipitation shield will impact eastern Kansas and Oklahoma, as well as Missouri and Arkansas. At present, the best moisture chances for Nebraska are currently depicted to occur November 10th across extreme southeast Nebraska. If this system shifts northward over time, then the precipitation shield would expand to cover the southeastern ¼ of the state.

The cold air that is forecast to filter in behind this upper air trough as it pushes east-northeast of the Nebraska should return maximum temperatures back into the 40’s statewide. As with any developing trough moving into the late fall period, a difference of 5-10 F on forecasted high temperatures can turn a rain event into an accumulating snowfall event. There has been at least 3 accumulating snow events this October across the northern Panhandle so the atmosphere does have enough cold air aloft to produce snowfall when air temperatures at the surface drop into the middle 30’s or lower.