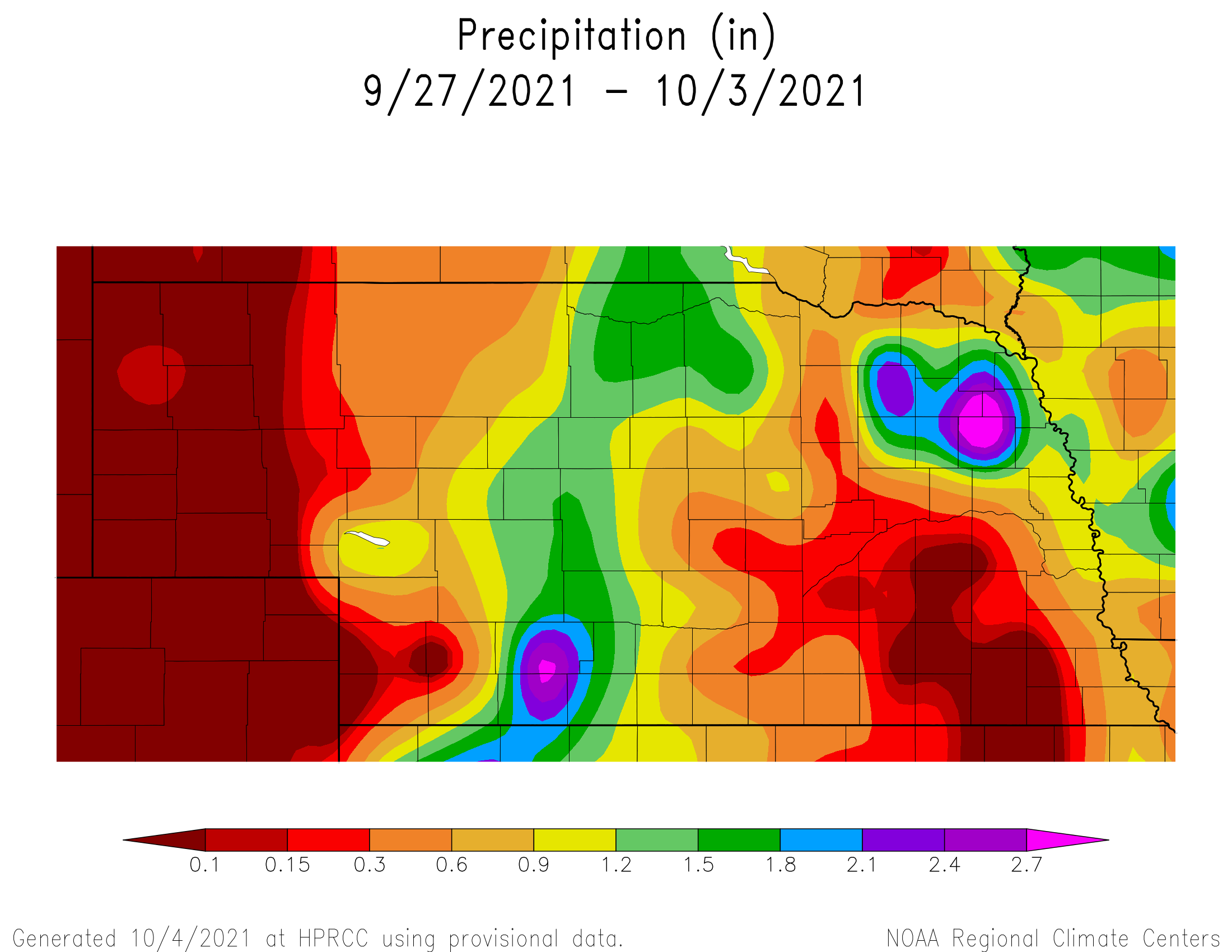 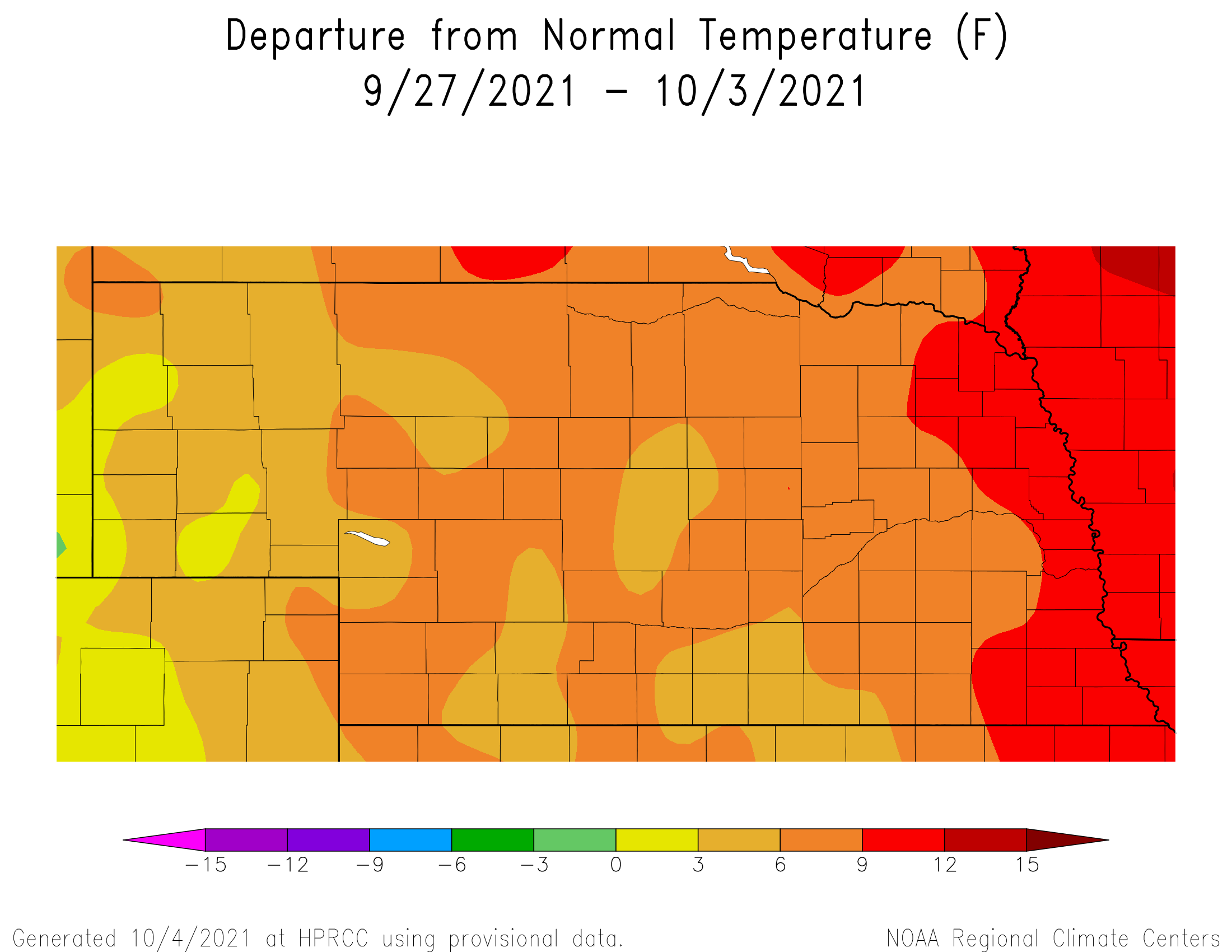 This past week brought excellent harvest weather through mid-week, then an upper air trough slowly crossed the center third of the country spreading pockets of 1-3 inch rainfall totals across portions of Texas, Oklahoma, Kansas, Nebraska and South Dakota. No severe weather was reported in Nebraska with this system as at least one inch of moisture was reported from McCook northward through Thedford and eastward to Beaver City. Secondary areas of 1-2 inches of precipitation were reported across the eastern 1/3 of the Sandhill region, as well as an area east and north of Norfolk extending to the South Dakota and Iowa border.

Unfortunately, the Panhandle missed out on measurable rainfall and most of southeast and east central Nebraska received less than 0.25 inches of moisture. The cumulative impacts of precipitation during the month of September can be seen in Figure 1 which depicts monthly precipitation anomalies. Almost all of the areas with above normal September moisture were located in the same areas impacted by the September 29 – October 1 precipitation event.

Even with cool down associated with last week’s storm, the impact on monthly average temperatures was negligible due an endless string of 80 F plus high temperatures during the middle two weeks of September. In fact, maximum temperatures breached the 90 F mark 6 times during September in Omaha and 15 times in Scottsbluff. Isolated 100 F or greater high temperatures were reported across the western 1/3 of the state September 9-11.

Harvest activity this past week proceeded unabated through September 28th before a slow moving trough of low pressure moved across the central and southern Plains September 29 – October 1. The most significant harvest delays occurred in areas receiving over an inch of precipitation which included portions of northeast, southwest, west central, south central and central Nebraska. Precipitation across the Panhandle, east central and southeast Nebraska was generally less than a half inch, which allowed producer to return to harvest activity this past weekend.

According to the Nebraska Agricultural Statistics Service (NASS), producers across the state averaged 5.5 of suitable conditions for fieldwork during the past week, although the west and east ends of the state gained an additional 0.5 to 1.0 day of suitable field activity weather due to light to nonexistent precipitation. As the month turns to October and crops essentially reaching maturity statewide, current and future weather conditions will determine the pace of harvest activity, as well as the amount of precipitation that will go into subsoil moisture recharge for the 2022 cropping season.

NASS reports that statewide topsoil moisture ratings as of October 3 stood at 7% very short, 36% short, 55% adequate and 2% surplus. There has been little movement in topsoil ratings since the last crop report I issued on September 14th prior to the onset of my vacation. The largest overall change came in the short and adequate categories which saw the short category gained 5 percentage points at the expense of the adequate category which dropped 5 percentage points.

Subsoil moisture ratings as of October 3rd according to NASS stood at 12% very short, 41% short, 45% adequate and 2% surplus. The largest movement in these numbers over the past 3 weeks was in the short category which lost 3 percentage points and the adequate category which gained 3 percentage points. What these numbers show is that the welcome moisture across portions of central 1/3 of the state were offset by dryness across the Panhandle, southeast and east central Nebraska. Pasture ratings have shown little movement over the past three weeks according to NASS data. As of October 3, pastures rated very poor stood at 14%, pastures in poor condition was 16%, while 51% of the pastures were rated fair, 17% good and 1% were rated excellent. Once again there was little movement in the state numbers of the past 3 weeks as individual category changes were limited to plus/minus 2 percentage points. Soil moisture gains where precipitation exceeded one inch across the central 1/3 of the state were offset by the lack of measurable moisture across the Panhandle.

October is all about harvest weather and last year was exceptionally dry leading to poor soil moisture recharge and little relief from the drought conditions that developed as the growing season progressed. This year, September precipitation failed to provide normal moisture for the western 1/3 of the state, as well as much of the southeastern ¼ of the state. However, the difference this year so far has been the above normal moisture received through much of the central third of the state.

I appears from the latest GFS model run that several upper air troughs will move through the central third of the nation over the next two weeks. Compared to the lack of moisture last October, it appears that a more aggressive precipitation pattern is beginning to develop. Although harvest delays are likely if the storm systems come to fruition, there should be some alleviation of concerns in regards that this October will repeat the dryness and warmth of last October.

In fact, the Climate Prediction Center (CPC) issued their revised temperature and precipitation outlooks for the month of October on September 30th (Figures 3 and 4) and the major change from the preliminary outlook issued on September 16 was to remove below normal moisture for the southern Plains (including southern Nebraska) and replace it with an expansive area of above normal precipitation for much of the western and central corn belt. The temperature outlook continues to carry a high probability of above normal conditions, but the highest probabilities were shifted slightly northeast of Nebraska toward the western Great Lakes region.

The GFS model run issued mid-day on October 5 indicates that a series of upper air troughs will eject out of the western United States over the next 16 days. Upper air ridging is projected to dominate the central Plains through this Friday (October 8) before the first western U.S. upper air trough moves into the central and northern Plains during the second half of this weekend. Some energy may move across the Panhandle on October 9, but the primary precipitation associated with this trough will be concentrated across the Dakota’s and eastern Montana.

As the trough ejects northeast, a secondary piece of energy is forecast to develop on the southern end of the trough and move through eastern Nebraska and Kansas. Cumulative precipitation with this system hints at 0.25 to 0.50 inches of moisture, potentially more if the trough takes a more southerly route. After a brief reprieve October 11-12 under weak high pressure aloft, another trough will move into the central United States October 13-15.

The GFS has been advertising this second system for the past week and has consistently promoted this storm on the strong side. In fact, if the GFS is correct, widespread rainfall will be centered over Nebraska, with the potential for some accumulating wet snowfall possible across the northwestern Panhandle, northeastern Wyoming and western South Dakota. At present, the GFS model continues to keep freezing temperatures north of the state, but a southward movement of this systems projected path would pull in freezing to near freezing temperatures into the northern ½ of the state.

A third system is forecast to develop October 18-20 and the forecasted precipitation shield by the GFS model targets Kansas, Nebraska and South Dakota. Although not as strong as the October 13-15 storm, the GFS still hints at moderate precipitation with the current forecast potential in the 0.50-1.00 inch range. The end of the current GFS model period is October 21 and places Nebraska under an area of weak high pressure aloft, but also places another trough just west of us and based upon forward movement speed would bring this trough across the central Plains sometime between October 23rd and the 26th.

The bottom line is that a more aggressive precipitation pattern appears to be developing and should lead to a slow down or temporary halt to harvest activity by mid-month. The length and areal extent of delays will depend on how correct the GFS model is in projecting the movement of these systems and whether significant moisture develops. Additionally, we are reaching the time of year when any system has the potential to develop into a major winter storm, so this active pattern will need to be watched in regards to pulling enough Canadian air southward to change the precipitation from liquid to frozen.