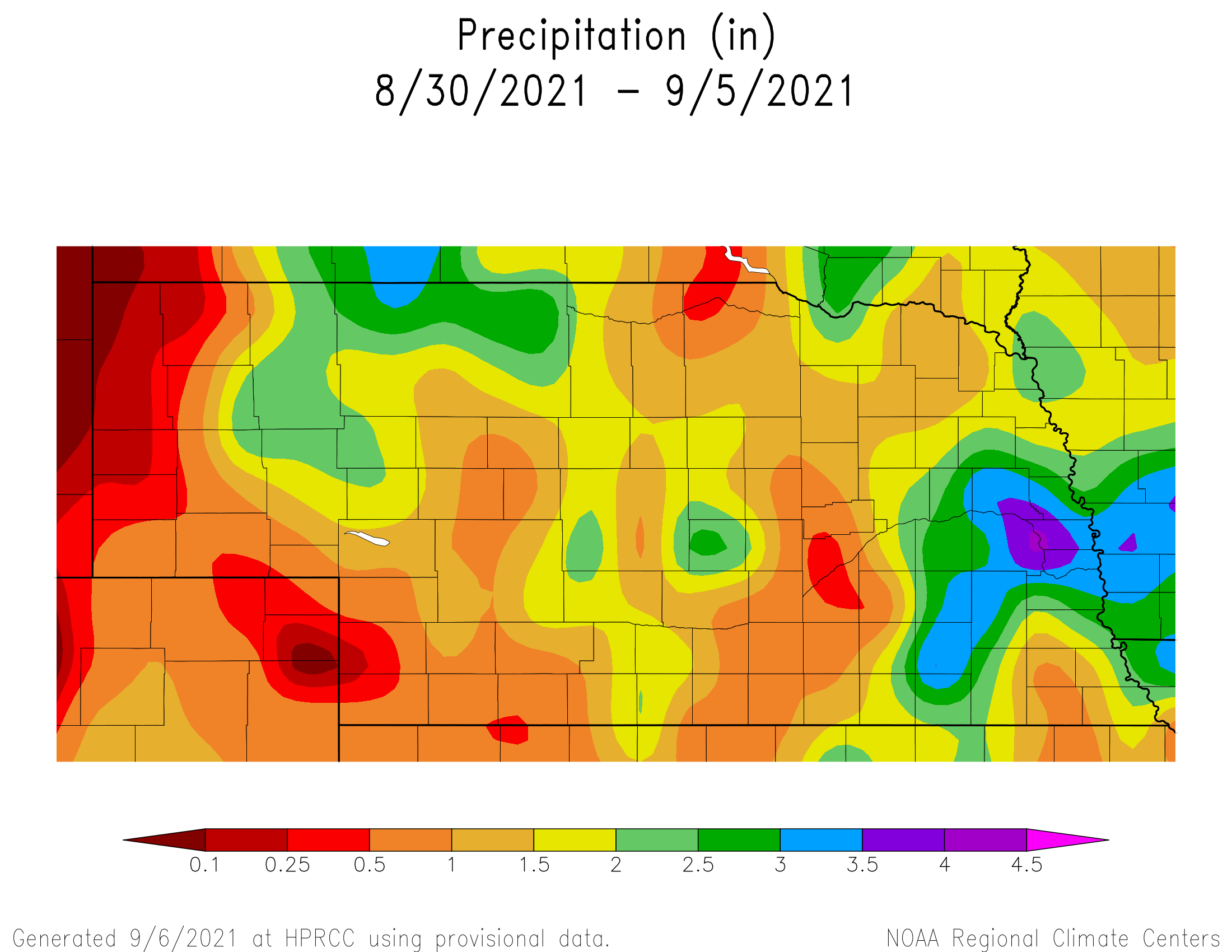 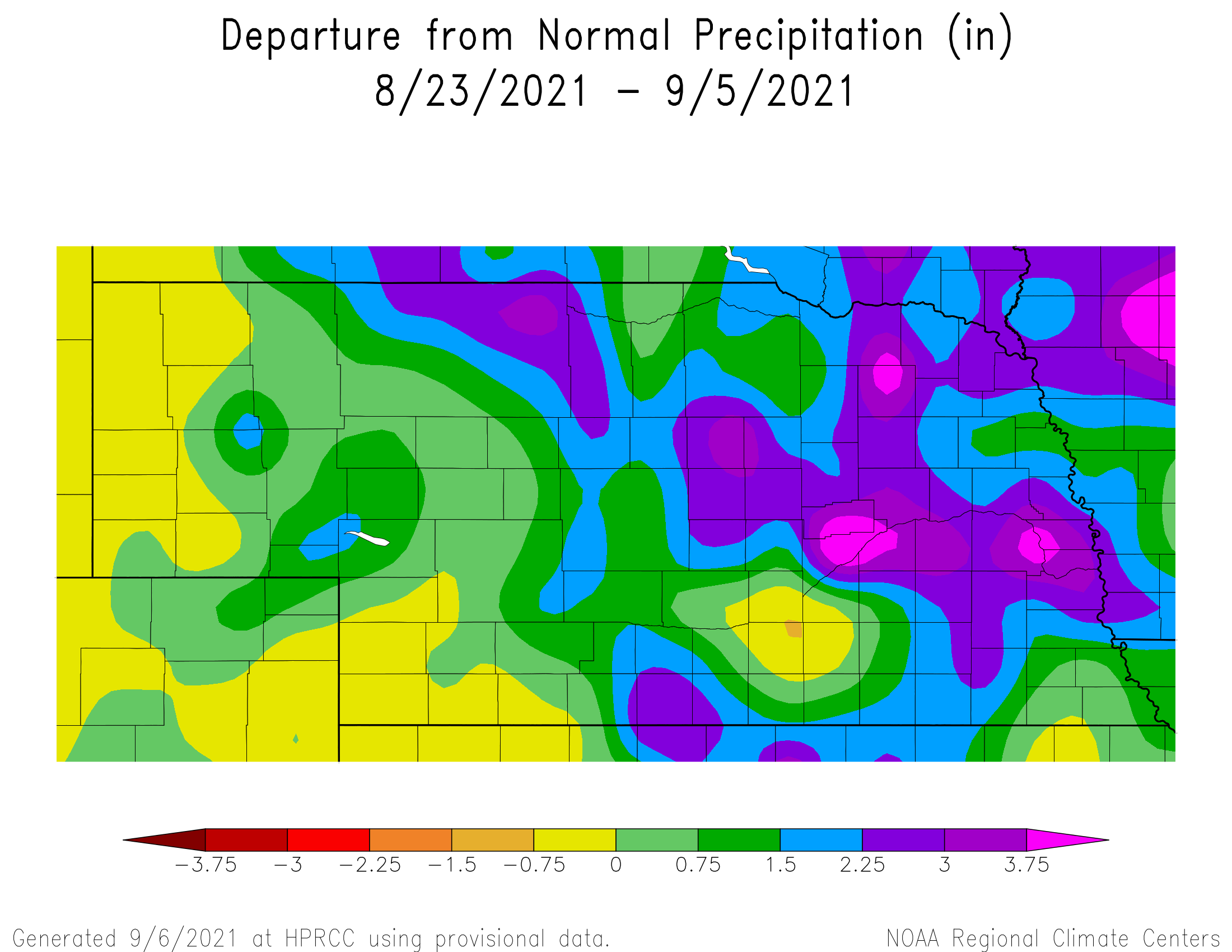 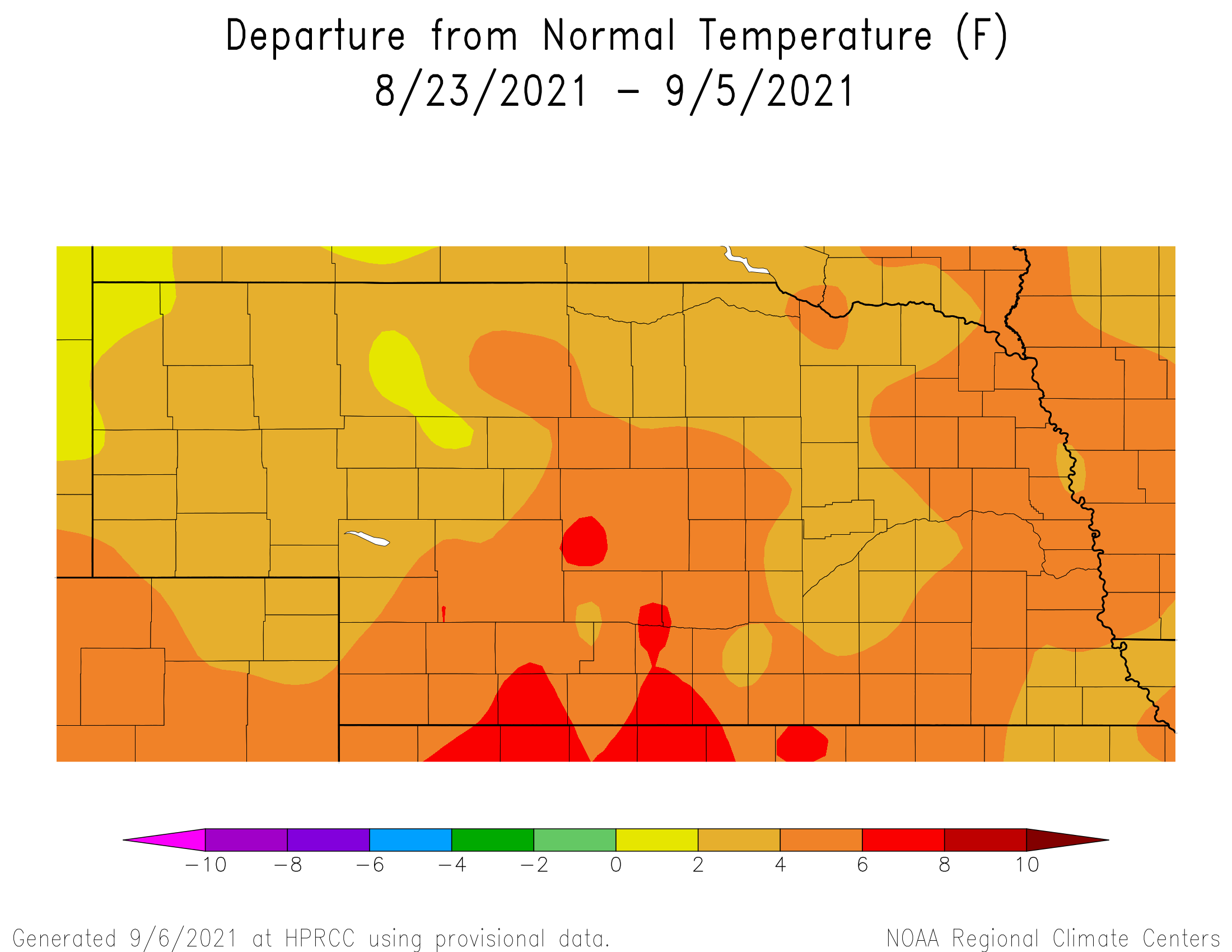 Thunderstorm activity during the last week produced significant moisture across portions of eastern Nebraska. According to Figure 1, an area extending from just north of Fairbury northeastward through northwestern Lancaster county then eastward toward the Iowa border received at least 3 inches of moisture. A small area encompassing the Mead to Fremont area exceeded 4 inches. On the flip side, less than 0.50 inches of moisture was received across the northwestern Panhandle, west central sections of the southwestern agricultural district, central Niobrara river valley and the Central City to Aurora area.

During this past week, there was precipitation reported somewhere in the state every day between August 30th and September 5th according to the NERain observation network. The most robust and broad based precipitation event during this period occurred the evening of August 30th through the morning of August 31st east of a line from Valentine to Hebron. Within this region, over one inch of moisture fell north of a line from O’Neill to Columbus to Brownfield. Additionally, over 3 inches of precipitation was reported in a 30 mile wide area extending from Pierce to Nebraska City.

Two week moisture anomalies (Figure 2) indicate that the western half of the Panhandle, the southwest corner of the state and the Grand Island-Kearney-Hastings area have received below normal moisture. However, the remainder of the state has received above normal moisture that should help fill grain where crops haven’t reached maturity. Surplus moisture in excess of 3 inches during the past 14 days has fallen in pockets of north central and northeast Nebraska, as well as a large area north of a line from Broken Bow to Omaha.

During this same period, average temperatures were above normal (Figure 3) as Nebraska was positioned south of the upper air troughs that moved across the northern Plains. Any cold front that moved through the state only brought 1-2 days of relief from maximum temperatures reaching the upper 80’s to upper 90’s during this two week stretch. Average temperature anomalies ranged from 2 to 6 F above normal the past 14 days, with 4-6 F anomalies common across southwest, south central, central and east central Nebraska.

In regards to precipitation, CPC added an area of above normal moisture activity in New Mexico, eastern Arizona and southern Colorado in their final September precipitation outlook. All of these adjustments paint a more positive outlook for Nebraska in regards to building soil moisture supplies for the 2022 cropping season by eliminating warmth and dryness across the northern Plains east of the Continental Divide and increasing the probability that September temperatures and precipitation will be closer to normal across the northern half of the High Plains region.

Precipitation activity across the state during the past week helped improve topsoil moisture conditions, but subsoil moisture rating improvements were very limited due to the lingering impacts of drought conditions across the northwestern ½ of the state. Most locations statewide have received above normal moisture during the past two weeks, but crop water demands this late in the growing season are still high enough to offset some of the surplus moisture anomalies.

The latest GFS model run released the morning of September 8 hints at limited opportunities for moisture over the next two weeks and that they will occur in conjunction with the passage of upper air troughs moving from the Pacific Northwest toward the western Great Lakes region. At present, the GFS model forecast suggests that upper air trough passages will occur September 13-14, 19-21 and 23-24.

Since high pressure aloft is forecast to dominate the southwestern ¼ of the United States eastward through the southern High Plains, the return of low level Gulf of Mexico moisture will be limited ahead of approaching cold fronts. During the September 8-24 period, the trough passage September 23-24 appears to have the most potential to deliver moisture across the entire state. The precipitation currently projected for the September 13-14 currently indicates that the southwest and northeast corners of the state have the highest probabilities to receive measureable moisture. The September 19-21 precipitation chances are currently most favored for the southeast eastern corner of the state.

With the lack of widespread precipitation events predicted by the GFS model over the next two weeks, there should be extended periods of favorable harvest weather. Although maximum temperatures this time of the year can breach 90 F, the amount of hours in any given day above this threshold is considerable smaller than in August due to the declining hours of daylight available to heat the atmosphere at the surface.

From the GFS model standpoint, it appears that jet stream forecast over the next two weeks will produce periods of summer and fall like temperatures as upper air troughs move across the northern third of the United States. The GFS model forecast indicates that high temperatures will breach the 90 F across the Panhandle on September 9, with low 80’s across extreme eastern Nebraska. A trough moving across the northern Plains will cool temperatures slightly on the 10th, cooling highs into the 80’s statewide, then warming into the middle 80’s north to low 90’s south on the 11th.