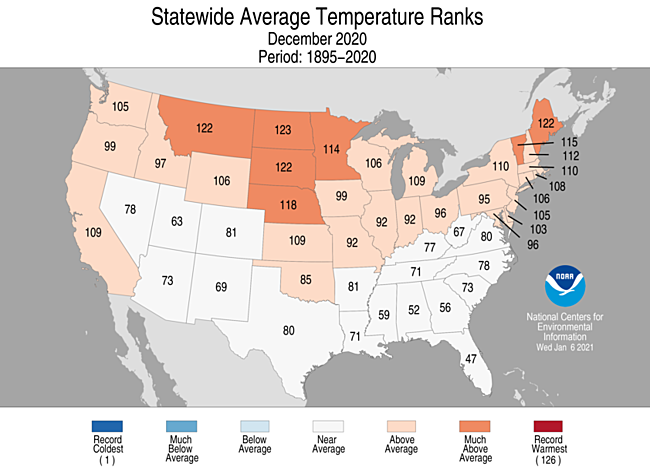 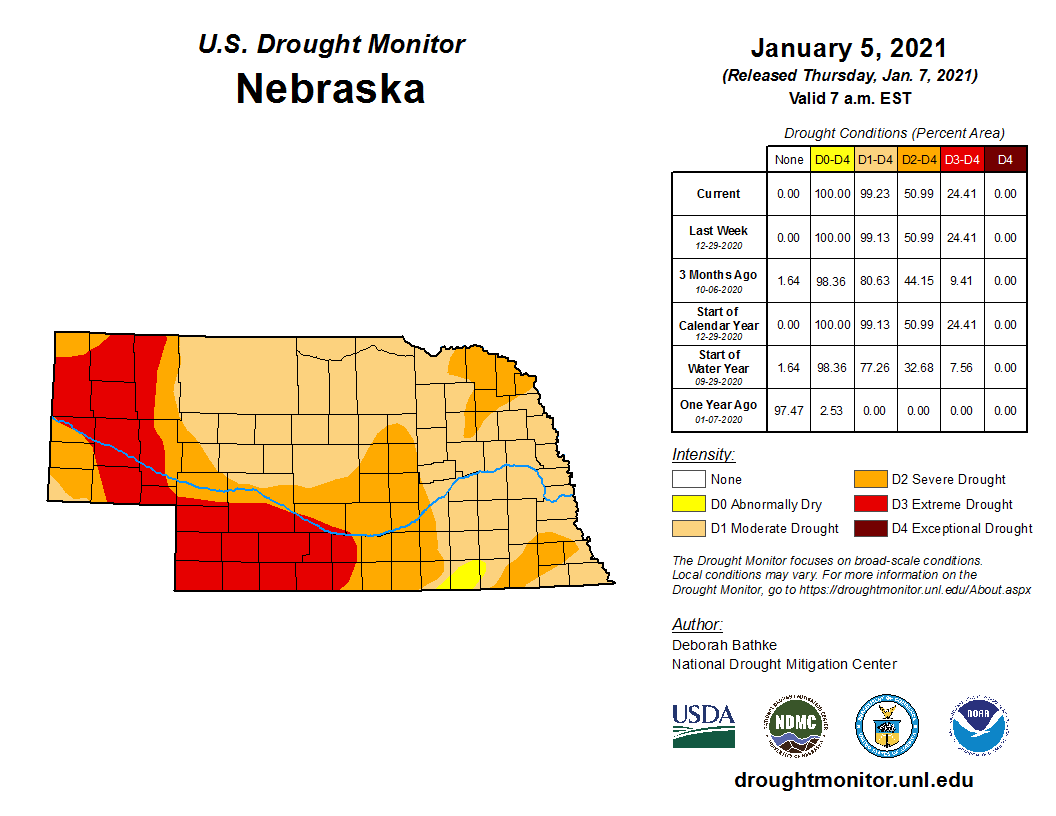 The statewide average temperature this December ranked in the top 10 warmest going back to 1895. A handful of 70° readings were reported early in the month and record daily highs. However, the winter solstice ushered in snowfall and a return to seasonable temperatures during the last week of December. Several locations in eastern Nebraska reported new daily snowfall records on the 29th. Precipitation was mixed around the state with pockets of wet and dry conditions compared to normal for December. Drought conditions remain widespread with the most recent U.S. drought monitor indicating 51% of Nebraska is in severe drought or worse.

Monthly total precipitation around Nebraska was mixed for the first month of winter and what is typically one of the driest months of the year. Much of central and portions of southeast Nebraska received above normal precipitation while western and northeast areas received below normal precipitation. The monthly statewide average was 0.59 inches, right about normal. Snowfall totaled more than a foot in some parts of the state for December, thanks to a couple of late month events. The highest totals occurred in east central Nebraska – around Grand Island, south of Columbus and the Omaha area. Shelby reported the highest monthly total at 16.1 inches. Daily snowfall totals on the 29th of more than six inches broke records in Norfolk (7.5 in), Omaha (6.8 in), Lincoln (6.5 in), Hastings (3.7 in) and Grand Island (3.8 in).

Warmth was the primary story this December across Nebraska. Temperatures reached into the 60s and even 70s nearly statewide. The high for the month was 71°F at a number of locations from Valentine to Superior. The northeast reported highs in the 50s, as is typical for this cooler and cloudier part of Nebraska during winter. The average statewide temperature of 31.2°F was 5.3°F warmer than normal and ranks as 9th warmest on record. We were not without cool weather and some below zero readings occurred later in the month. The statewide low of -6°F occurred at Agate. Soil temperatures around the state are showing relative warmth with many readings still above freezing.

Very warm, dry, and at times, windy conditions dominated the first three weeks of December. Producers were granted a favorable period for completing fall field work and other related projects. The conditions provided favorable grazing for cattle, helping to reduce supplemental feeding costs. On the flip side, the continuing dry conditions are a concern for the winter wheat crop. Dry surface conditions make for cold air penetration into the root zone if Arctic air arrives prior to an established snow cover. Additionally, the lack of moisture couple with high winds puts the crop in a vulnerable position for wind erosion. Some of these surface moisture concerns were alleviated temporarily during the final 10 days of the month as two weather systems brought snow, ice and rain to the eastern half of the state December 23rd and 29th. Snowfall of 3 to 8 inches blanketed the region and cool temperatures to end the month caused the snowpack to melt slowly and infiltrate unfrozen soils. At the end of December, the Nebraska Agricultural Statistics Service indicates that 56% of topsoil (top one foot) and 63% of subsoil moisture (below one foot) is short to very short. Soil moisture conditions improved an average of 9% from the end of November, due in large part to the December 29th snow storm. However, precipitation from October through December (fall soil moisture recharge period) was averaging 25-50% of normal across the western two-thirds of the state. In order to make up these deficits, the remainder of the winter will need to average nearly 300% of normal or 150-200% of normal moisture from now through the end of April. 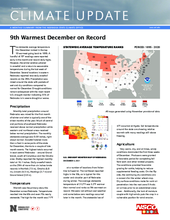