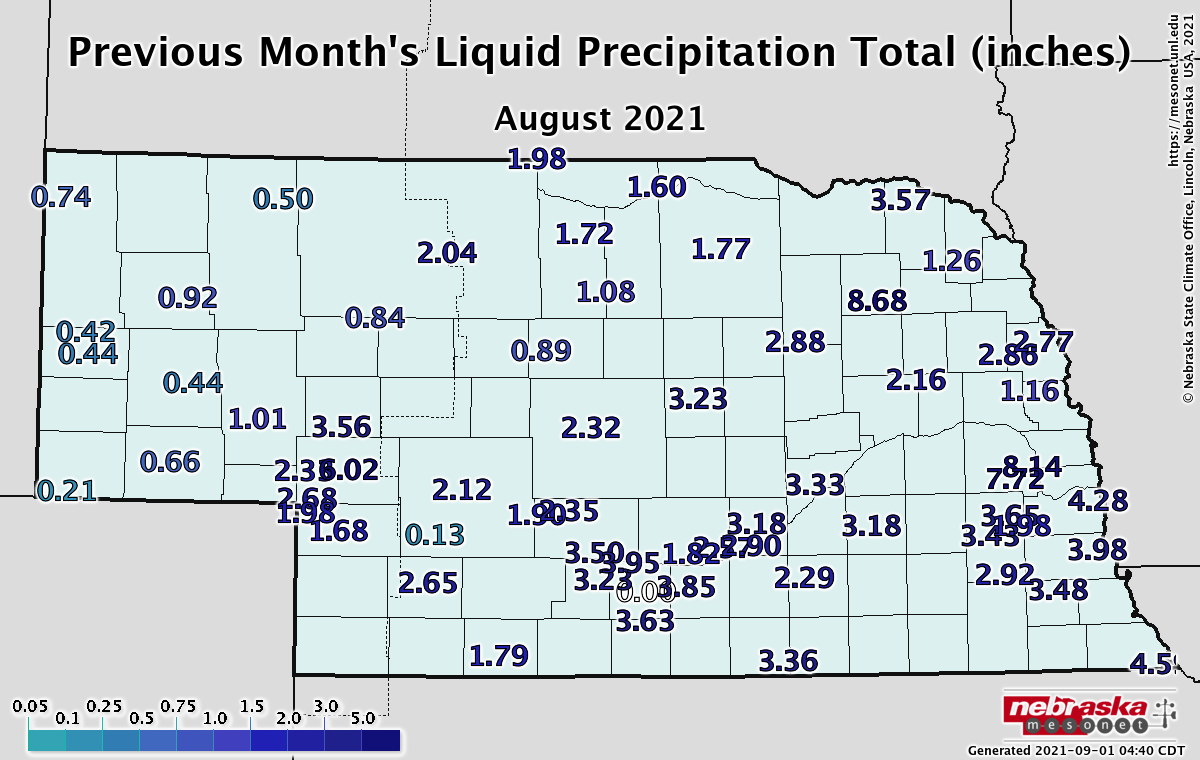 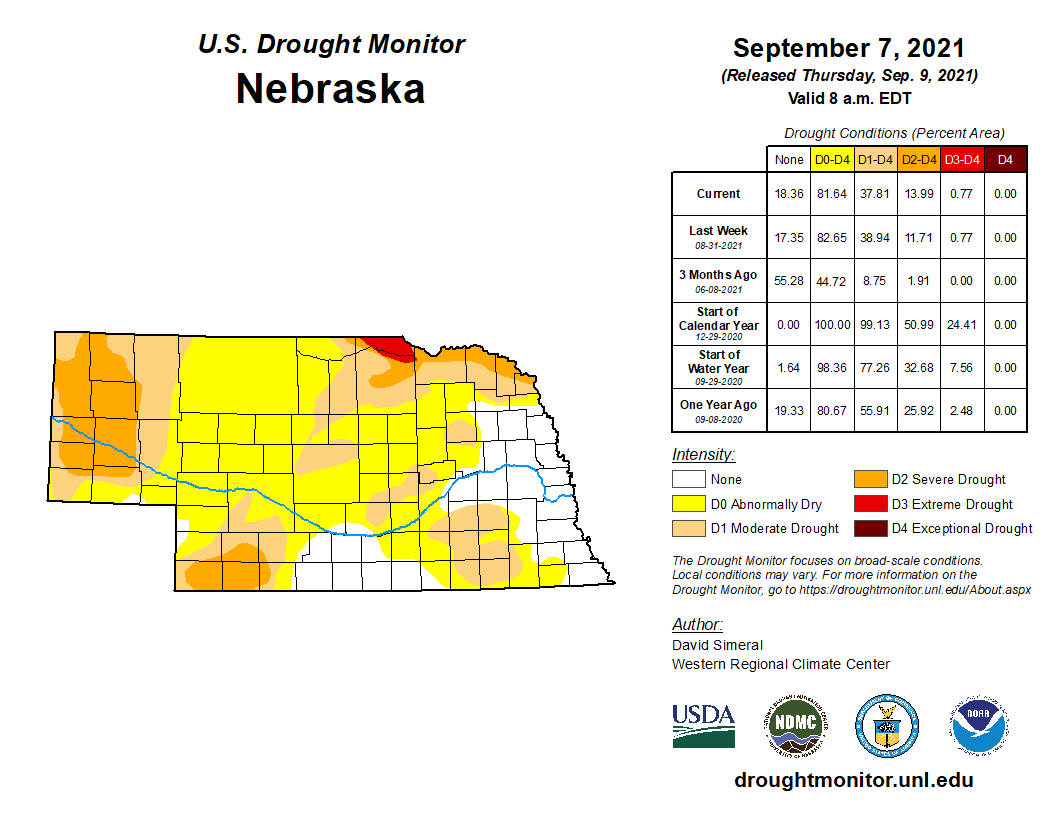 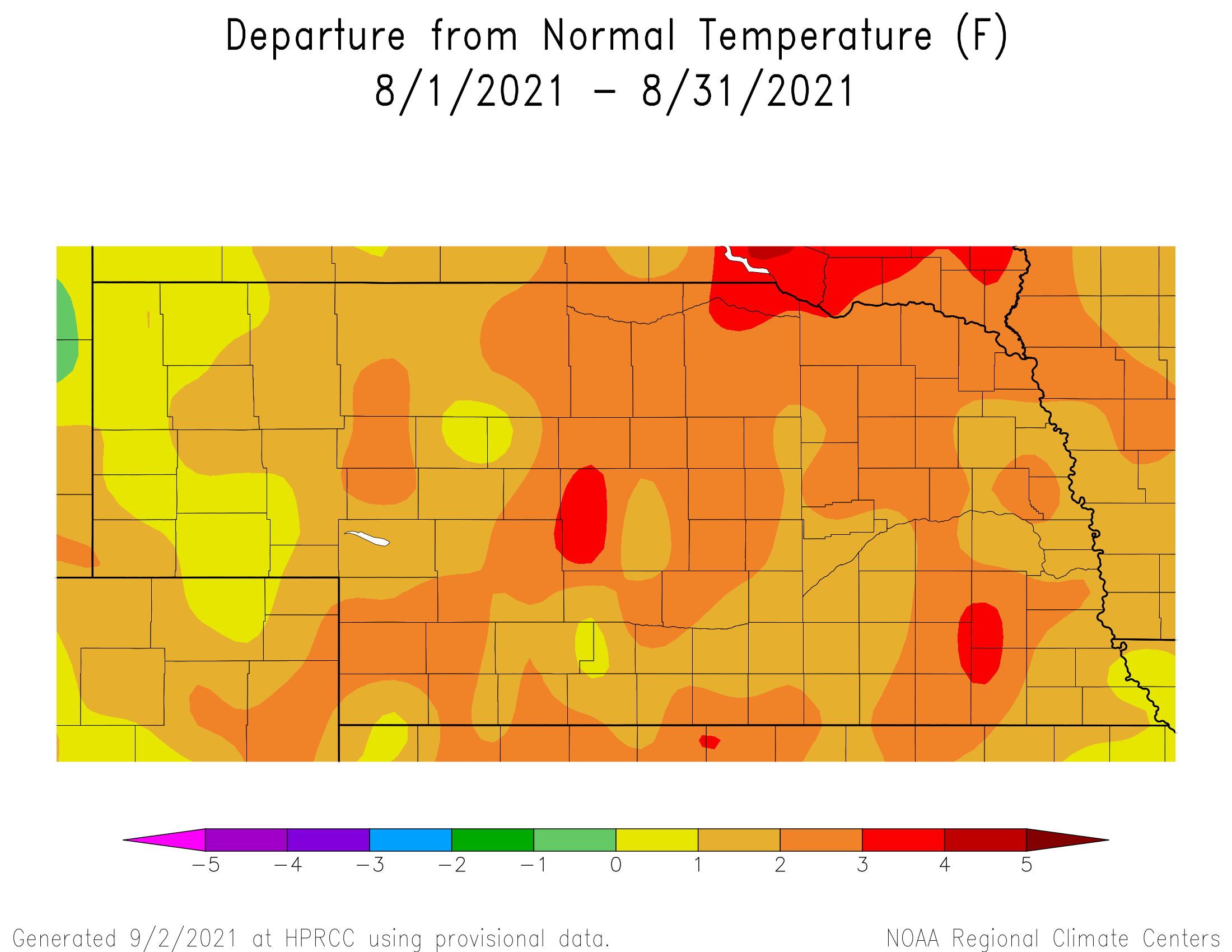 In a month that was about two degrees warmer than normal, Nebraska experienced worsening drought conditions overall. Drought expanded in much of the west and in pockets of eastern Nebraska throughout the month. September started with 39% of the state in drought and 44% categorized as abnormally dry. Precipitation was primarily below normal for the western two thirds of state, however, there were some pockets of heavy rainfall in the southwest, south central and east. Severe weather occurred throughout the month, but primarily on the 7th, 14th, 22nd and 30th, mostly hail and high wind with only one tornado. The newly released climate outlook for September shows enhanced monsoonal moisture for southwest U.S. and elimination of above normal temperature probability for northern Plains, both of which paint a more positive outlook for Nebraska.

As seemed to be the case this summer, rainfall amounts varied around Nebraska and were quite location-dependent. The highest precipitation amounts (excess of four inches) occurred in portions of the southwest as well as the east central and narrow band in the northeast. Monthly totals were in the seven to eight inch range for these isolated locations in the east. Much of the eastern third of Nebraska reported above normal rainfall amounts for August. Conditions were generally dry in the west and the lightest totals of half inch or less for much of the Panhandle. A few daily precipitation records occurred during the month – 1.47 inches on August 20th at North Platte and 1.34 inches on August 31st at Norfolk. Some impressive daily rainfall amounts occurred at Nebraska Mesonet stations, including 3.44 inches eight miles south of Arthur. Cooperative weather stations near Imperial and surrounding areas in the southwest had more than 4.5 inches on the 20th, while Pierce in the northeast received 4.23 inches.

The August statewide average precipitation was 2.90 inches, which is essentially normal. Historically, there isn’t a strong precipitation trend for Nebraska over the long term (1895 – present), however in recent decades (since 1991) we have seen a decent wetting trend with an increase of about half an inch.

Warmer than normal conditions were experienced statewide this August. The average temperature was 74.1°F, which is 1.8°F above average. The warmest high temperature during August was 105°F at Chadron and locations around Nebraska hit the century mark. Bushnell reported the state’s low temperature of 39°F, though most low temperatures were in the 40s and 50s. Incidentally, we ranged 80 degrees in the highest heat index temperature (115°F on the 12th near Rulo) to a wind chill temperature on the 21st of 36°F near Harrison. Four inches under a bare soil surface, Mesonet stations captured a high temperature of 98°F near Oshkosh and 52°F near Arthur.

August is one month in Nebraska in which we have not seen a significant temperature trend, neither long-term nor short-term. Though since we do live at the climate crossroads, variability reigns supreme.

Dry conditions and above normal temperatures during the first three weeks of August led to a steady decline in crop ratings for corn, soybeans and sorghum. The lack of moisture led to concerns in regards to soybean pod fill and corn ear tip back. Thunderstorm activity picked up the final 10 days of the month, with at least one report of severe weather by the Storm Prediction Center every day between August 22nd and 31st. Unfortunately, most of these events were focused on small regions which were more than offset by the large percentage of area failing to receive moisture from these individual daily events.

Although thunderstorm activity did increase late in the month, it was accompanied by high temperatures consistently in the 90’s to low 100’s August 23-28. The northern half of the Panhandle and the northwestern _ of Sandhill region reached or exceeded 100°F between 2 and four days during this stretch (location dependent). However, the southern half of the Panhandle failed to reach 100°F once during the month, although most locations experienced 6-9 days of 95° to 99°F high temperatures. Across the remainder of the state, maximum temperatures reached 100°F one to two days (location dependent) in pockets south of the I-80 corridor.

Pockets of heavy rainfall fell across southeastern _ of the state the final 10 days of the month and helped reduce severe and moderate drought conditions across the western half of the southwestern agricultural district, as well as the eastern Niobrara River valley, eastern Sandhill region and pockets of east central Nebraska. Unfortunately, the lack of moisture and very hot temperatures across the Panhandle led to drought expansion and intensification. The lack of subsoil moisture reserves was taking a tool on rangelands and the Nebraska Agricultural Statistics Service (NASS) indicated that 28% of pastures across the state were rated poor or very poor as of August 29. At the beginning of August, NASS indicated only 20% of pastures met this criteria.

The final September precipitation outlook issued by CPC calls for below normal precipitation for the Pacific Northwest and above normal moisture for the eastern half of the southwestern desert region and from southeastern Texas east-northeast through the northeastern United States. For temperatures, the final September outlook call for above normal temperatures along the west coast, southern Florida and the northeast United States. Below normal temperatures are indicated for the southern Mississippi valley from Kentucky southward to the Gulf of Mexico.

CPC has diminished the area above normal temperatures and below normal moisture across the western United States when comparing the preliminary and final September temperature and precipitation outlooks. CPC has eliminated above normal temperature forecast for the northern Plains and Great Lakes region, but added above normal moisture from monsoonal activity for New Mexico, eastern Arizona and southern Colorado. All of these adjustments paint a more positive outlook for Nebraska in regards to building soil moisture supplies for the 2022 cropping season by eliminating warmth and dryness across the northern Plains east of the Continental Divide and increasing the probability that September temperatures and precipitation will be closer to normal across the northern half of the High Plains region.