Abundance of rain for portions of south, tornados impact southwest 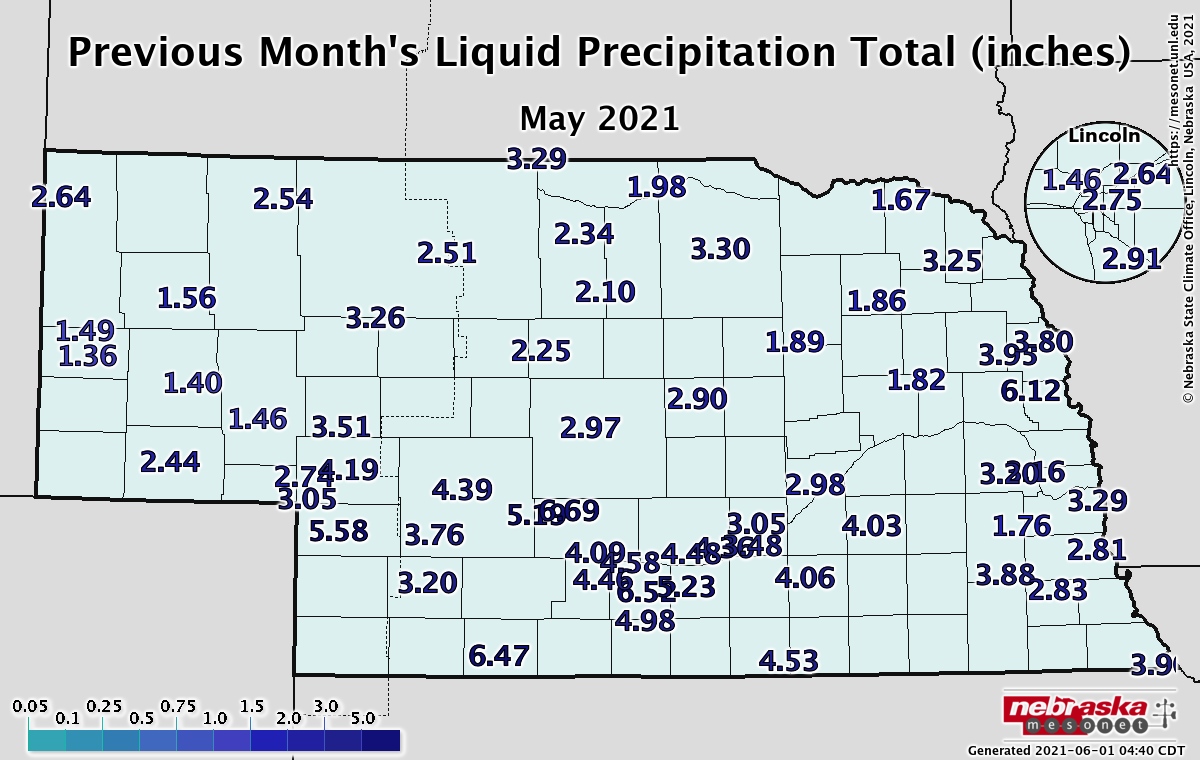 May precipitation totals from the Nebraska Mesonet

May precipitation totals from the Nebraska Mesonet 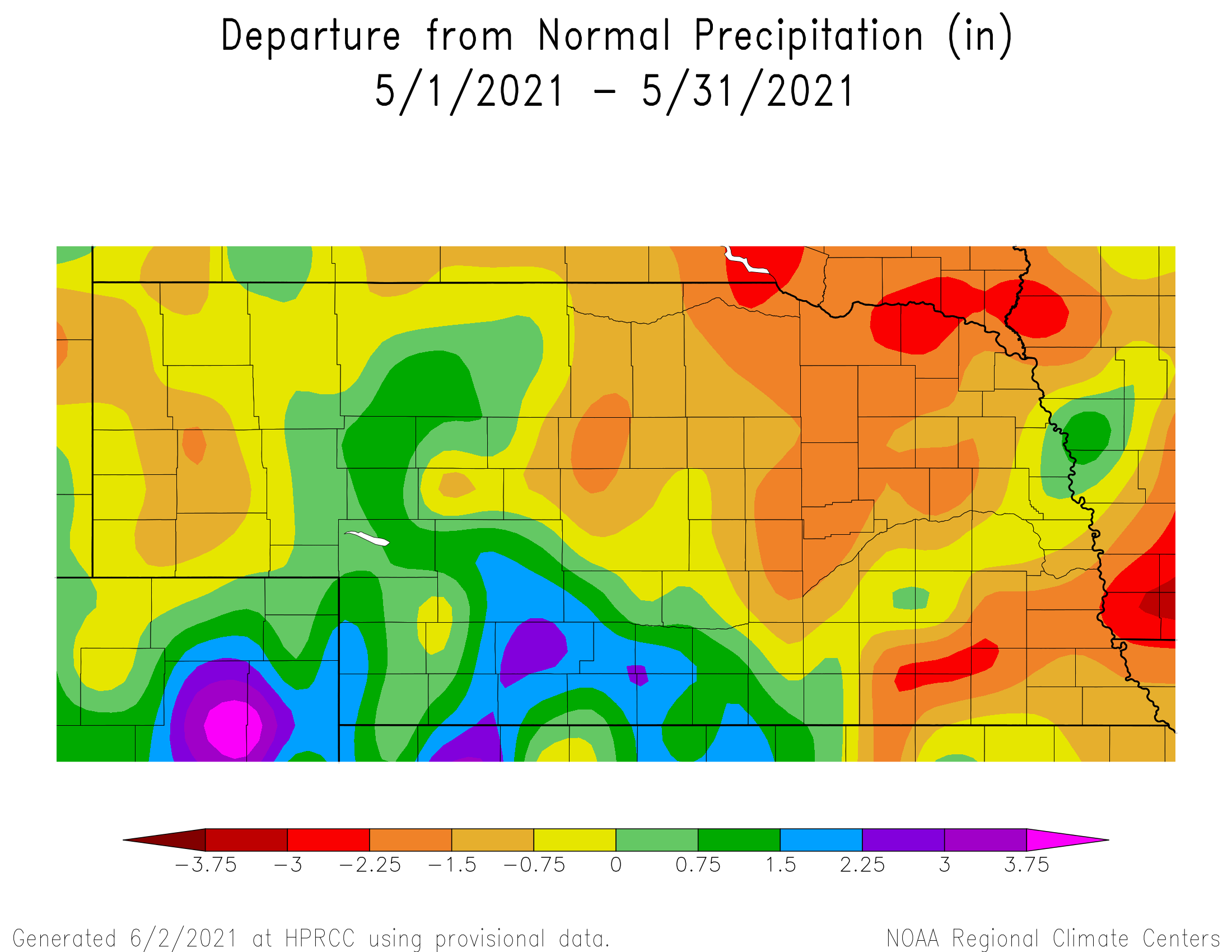 Departure from normal precipitation for May

Departure from normal precipitation for May 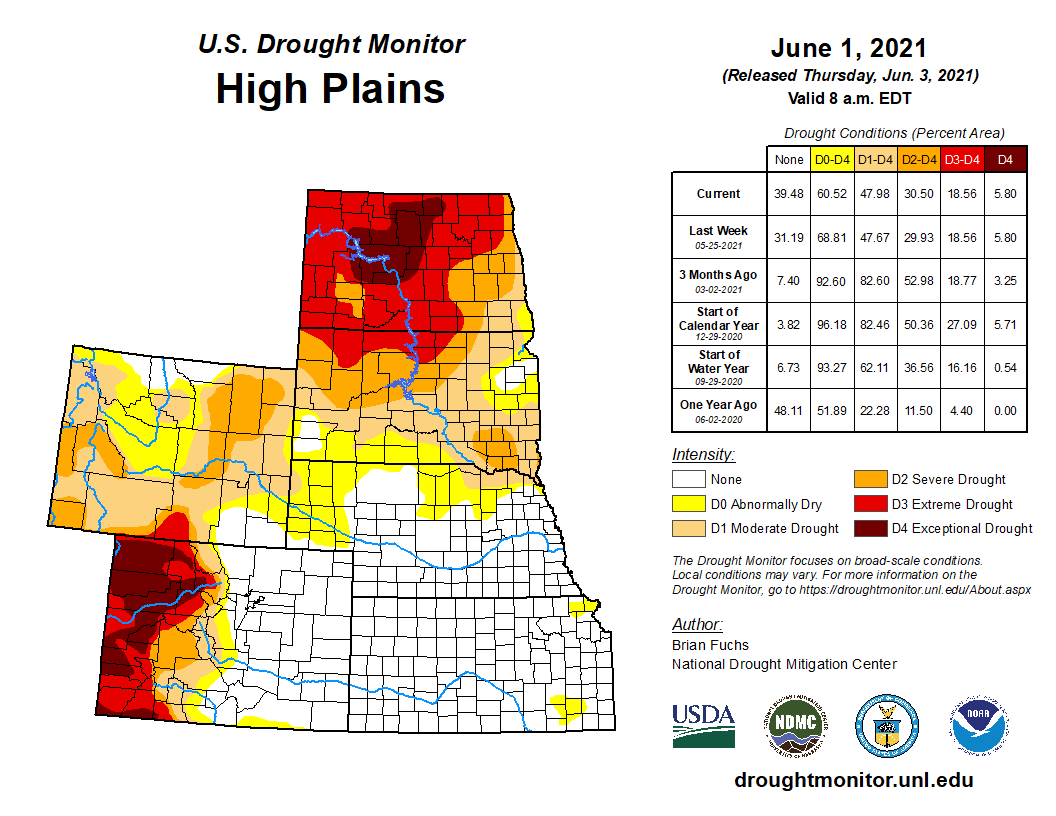 Drought conditions from the U.S. Drought Monitor for the High Plains region

Drought conditions from the U.S. Drought Monitor for the High Plains region 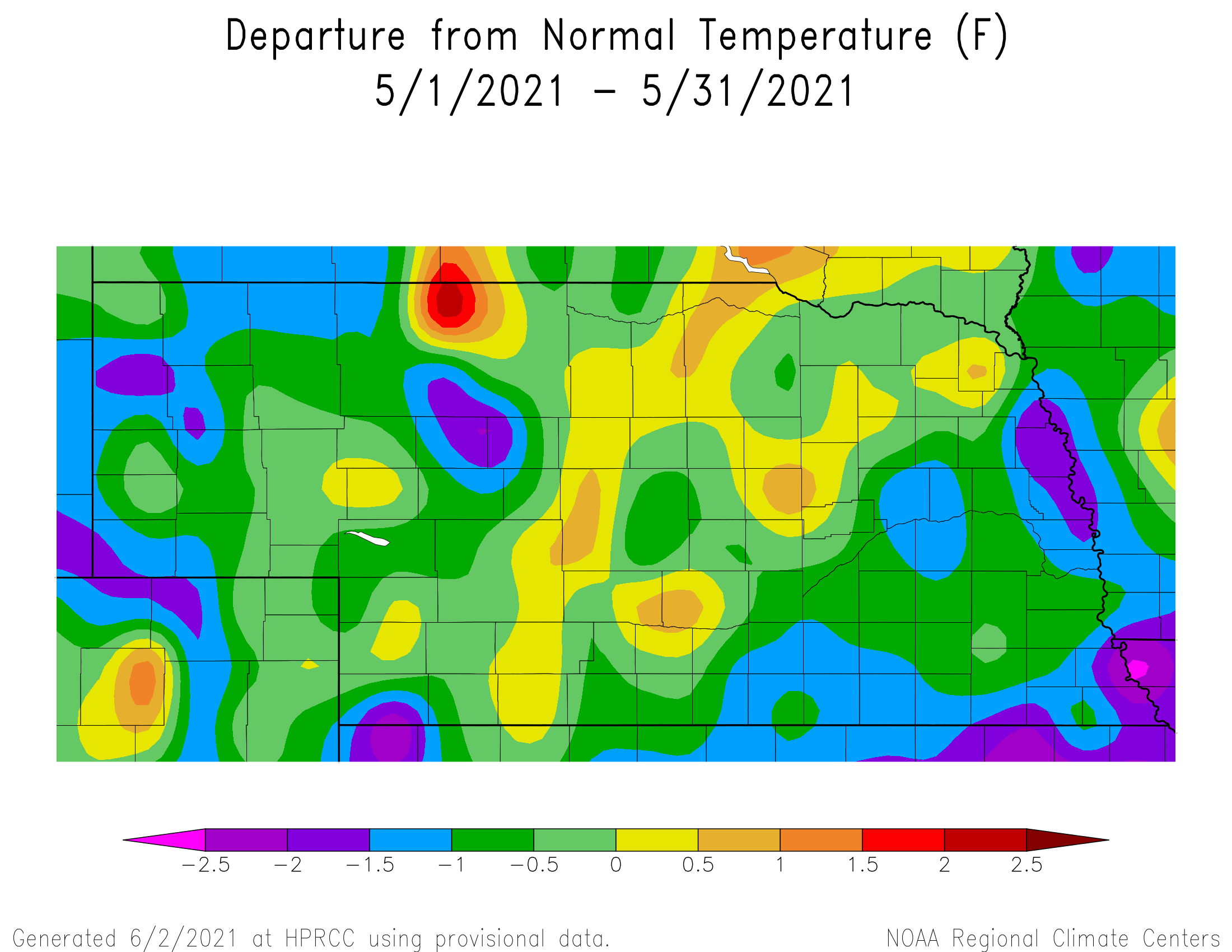 Temperature departure from normal for May

Temperature departure from normal for May

Severe weather was much more active during May, particularly late in the month with a tornado outbreak in southwest Nebraska on the 26th. Overall, temperatures averaged below normal for most of the state and precipitation was relatively heavy for portions of the south and west. This allowed for some categorical drought improvements for this area of the state. Unfortunately, the dryness worsened for several northeastern counties. Moderate drought (D1) now covers 4% of the state, in western Sioux County and across a five-county area in the northeast. Abnormal dryness covers another 36% of Nebraska. Drought conditions are much worse not too far away with exceptional drought found in North Dakota and western Colorado. The active weather pattern that brought some high rainfall totals for May appears to be shifting to warm and dry as we look to June. Heat and dryness impacts to crops and rangelands are expected.

May and June are typically the wettest months of the year across Nebraska. West central and southwestern portions received at least an inch above normal precipitation for May. The Nebraska Mesonet station near Indianola reported 6.47 inches and Grant received 5.58. An observer near Champion reported a whopping 7.29 inches. Rainfall was also high for areas of the central Platte valley as well as an isolated area in the east central. Aurora had the statewide high rainfall total of 8.04 inches while Winslow reported 6.12 inches. The statewide average total for the month was about a quarter inch below normal at 3.63 inches. Over the past three decades, May has trended wetter across Nebraska, gaining about an inch over a 30 year timeframe.

After a quite March and April, convective season ramped up during May. Preliminary reports indicate a total of 16 tornados, 65 hail events and 32 high wind events. The most active day was the 26th when eight tornados were reported, including an EF2 tornado north of Benkelman in Dundy Co. Damage included broken power poles and downed trees. The Nebraska Mesonet station near Indianola reported a wind gust of 55 mph on May 3rd.

Most of Nebraska trended cooler than normal this May, which was the case for the northern Plains and most of the eastern two-thirds of the country. Only one temperature record was broken during the month when Valentine reached 24°F on May 4th. The monthly high was 94°F near Verdel in northeast Nebraska and all reporting stations reached at least 80°F or warmer at some point during the month. On the cold side, most locations reported a below freezing temperature (except southern and eastern locations) and the statewide low was reported near Agate (19°F). The statewide average temperature of 57.9°F was half a degree cooler than normal. Over the past 30 years, Nebraska has trended cooler during May by about 1°F.

Planting progress was rapid during the first 10 days of May due to above normal temperatures and the lack of significant moisture as high pressure aloft dominated the western half of the U. S. A series of upper air troughs moved into the western United States May 11-24 ushering in a sustained period of heavy cloud cover, below normal temperatures and daily rounds of precipitation. South Central and southwest Nebraska received widespread 2-4 inch totals during this stretch, while extreme northeast Nebraska struggled to record a half inch of moisture. Although the moisture was welcome across southwest Nebraska, planting delay issues dominated the second half of the May, which will push the remainder of soybean and sorghum planting into early June. Further east, the long stretch of cloudy, damp and cool weather increased early season disease issues, but failed to produce significant widespread moisture. Prior to the onset of these damp conditions, producers were having issues with soil crusting impeding soybean emergence. Winter wheat and pasture ratings have slowly improved during the month of May, due in large part to the beneficial moisture that fell during the middle third of the month. Although the 2020 drought signal has weakened recently, a return to below normal moisture and above normal temperatures will quickly use up recent soil moisture gains. Timely rainfall will be required going forward to maintain cool season grass growth, while promoting rapid early warm season grass growth. The abundance of above normal moisture across southwest and south central Nebraska will help offset the need for extensive irrigation during the first half of June.