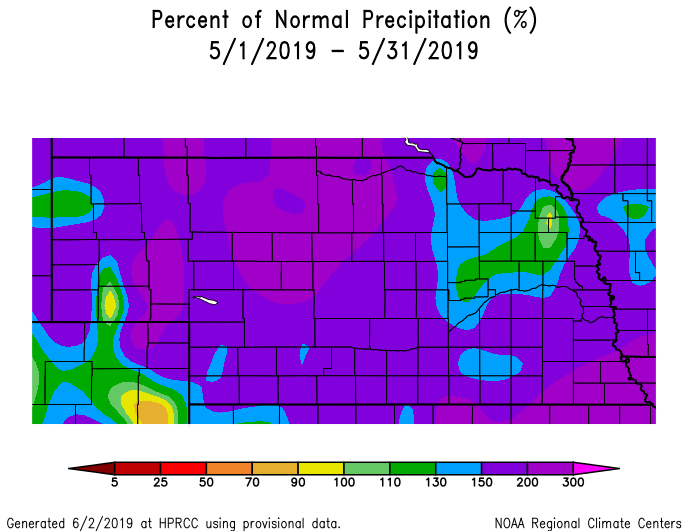 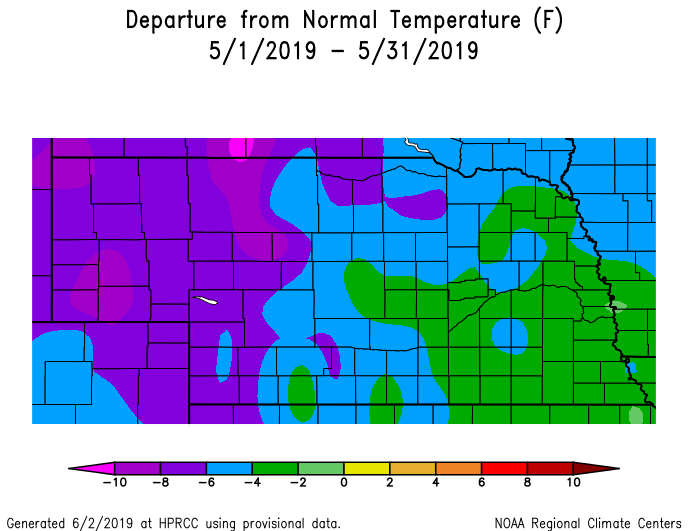 If we were to sum up May in three words, they would be “wet,” “cool,” and “stormy.” An active weather pattern kept things interesting around Nebraska thanks to a jet stream pattern with a trough in the west and a ridge in the east. Enough moisture was in atmosphere so that systems moving across the state brought plenty of rainfall, some of that coming in heavy doses and most of that falling on already saturated soils. Temperatures were cool enough in the Panhandle that some locations received snow — and impressive amounts. Tornado, hail and wind storm reports were plentiful and even the monthly tornado total is more than half of the typical seasonal total. Flooding continues to be widespread around Nebraska with a continuation of above-normal rains. Interstate 29 was opened for a time in May but closed again in early June due to flooding.

As system after system rolled through Nebraska, the rain kept coming. Both the amount of rainfall during May as well as the number of rainy days were above average. The highest precipitation amounts occurred in the southeast corner of the state with more than 10 inches reported. This is nearly a third of the annual average total for this part of the state and is twice the normal for May. In the west, rainfall was also high for the region with monthly totals at or approaching 5 inches, which is about 50% above average. Central Nebraska saw rainfall amounts in the 5- to 8-inch range.

Nearly all weather-observing stations around the state of Nebraska reported a daily rainfall total of more than 1 inch. The maximum one-day total for the month was observed in Polk, with 4.89 inches. A few record daily rain events occurred during the last week of the month. North Platte (1.87 inches) and Valentine (2.17 inches) airports both had record daily rains on May 21. Hastings airport had a record 2.06 inches on May 27 and Scottsbluff received 1.23 inches on May 28, a record for this date.

Temperatures were cool enough during May to result in snow around Nebraska. Trace amounts were observed at various locations statewide. Significant snow amounts fell in the Panhandle during the third week of the month with a handful of locations receiving 5 inches to 8 inches of wet snow.

On a statewide basis, the precipitation total of 6.72 inches was 3.03 inches above average and ties with 1995 as wettest on record (the period of record goes back to 1895). The climate trend for Nebraska during May is trending toward wetter over the past three decades.

Rivers and streams are running at high or record high flows for the eastern two thirds of the state. Snowmelt is not complete in the Rockies with basins at more than twice the normal snow water equivalent for this time of year. The state’s largest reservoir, Lake McCoughney is running at 89% capacity to start the irrigation season.

Temperatures cycled quite a bit throughout the month with both warm and cool conditions. It was particularly cool with strong temperature departures during the second half of the month. Temperatures averaged in the mid- to upper-40s in the Panhandle, 50s for central Nebraska, and approaching 60 degrees in the southeast. Overall May was anywhere from 4 to 8 degrees below average for eastern and western portions of Nebraska, respectively. The statewide monthly average temperature of 53.5 degrees is 5.2 degrees below average and ranks as 6th coldest since 1895. We have seen a trend toward cooler May conditions if we look at the last three decades.

Temperatures stayed above freezing for the eastern portion of the state, while a hard freeze was observed for much of the western half of the state. This is considered a late last hard freeze for these areas. The lowest observed temperature was 17 degrees at Bridgeport, along the North Platte River in Morrill county. The Hastings airport had a record low high temperature of only 47°F on May 20. The month was not without warmth, however, as the high temperature of 95 was observed in Fremont and Omaha. Statewide, temperatures got into the mid-80s and low-90s and some record-high temperatures were reported at mid-month. On May 16, the Grand Island (93°F), Lincoln (94°F), Norfolk (94°F), Omaha (95°F), and Grand Island (93°F) airports all reported a new record-high temperature.

Severe weather was plentiful during the month in what is normally an active time of year for Nebraska. Including some outstanding tornado reports yet to be confirmed, we’ve had more than 30 preliminary reports of tornadoes in May, although some may be multiple reports of the same tornado. In comparison, our seasonal total statewide is 57. Hail reports were plentiful with 184 cases scattered throughout the first, middle and last parts of the month. Reports of high wind during the tornadic and hail activity total 41 damaging events. The Nebraska Mesonet station at Dunning 6NW reported a wind gust of 57 mph on May 17, the highest for the month across the network.

As of June 3, planting progress and  emergence were behind schedule for corn and soybeans given the excessively wet conditions. However, Nebraska is faring relatively well compared to our neighbors. Given the late planting date, we should hope for a warm September and no early freeze to get crops at maturity. Some issues in the near term will be nitrogen losses and weed control. There could be hay harvest issues, particularly if the rains keep up at this pace.

Given the general long-term wetness for much of the country, drought remains near record low extent, according to the U.S. Drought Monitor. In fact, for the first time in the drought monitor’s history, Colorado is free of drought. There are discreet pockets in western Nebraska that show some slight precipitation deficits going back to October.

The increased chance for a cool and wet May was certainly verified. The 30-day outlook for June issued on May 31 by the Climate Prediction Center indicates a tending toward above-normal temperatures across the extreme Northern Plains and Pacific northwest, with below-normal temperatures across the Southern Plains. Precipitation is forecasted to be above normal from the I-80 corridor south and west of Nebraska. The temperature outlook at the late May release is considerably warmer for the northern half of the High Plains than the mid-May outlook. Precipitation appears more consistent between the two forecasts and places Nebraska on the northern extent of a higher probability of above-normal moisture centered on the southern half of the High Plains.

The outlook at this time for summer continues to be the same song and dance. A general cool-and-wet trend scenario remains as the highest probability for the central U.S., including all of Nebraska. With the above-normal temperature chances creeping into the northern plains during June, this could speak to some uncertainty in the summer temperature outlook. The general cool-and-wet trend is in part driven by continuing El Niño conditions and persistence of the past tendencies. Although it remains a weak event, predictions are for it to persist through summer. The chances of transitioning to neutral conditions increase as we get into fall.

* The Nebraska Mesonet is in the process of verifying the accuracy of this reading, and will update the May climate summary online when the details become available. 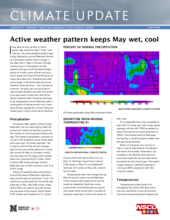