And the hits just keep on coming for Nebraskans 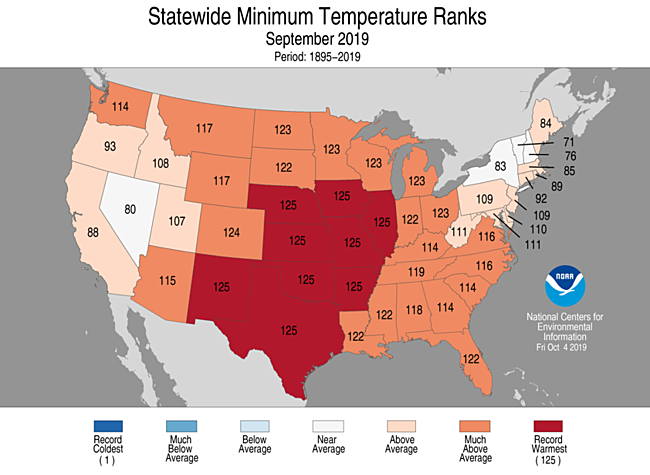 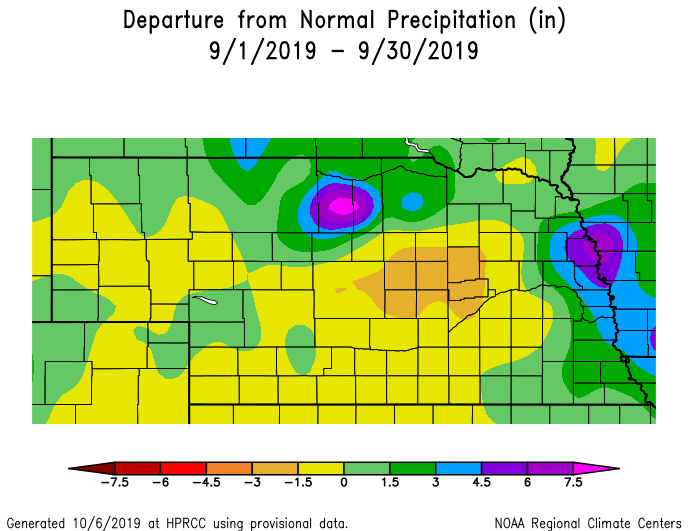 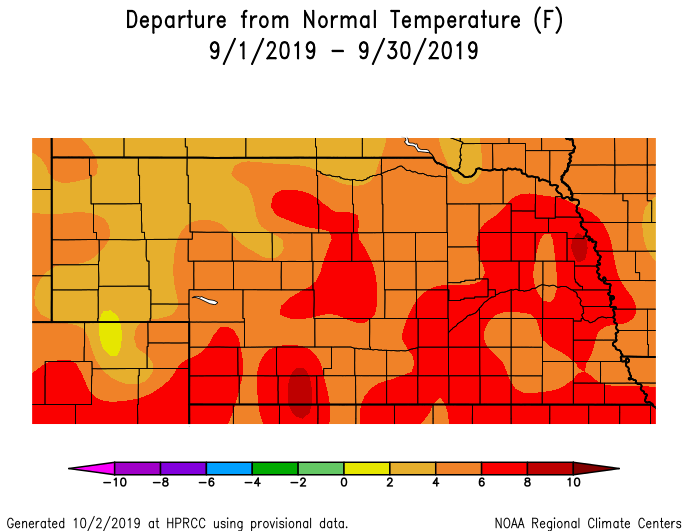 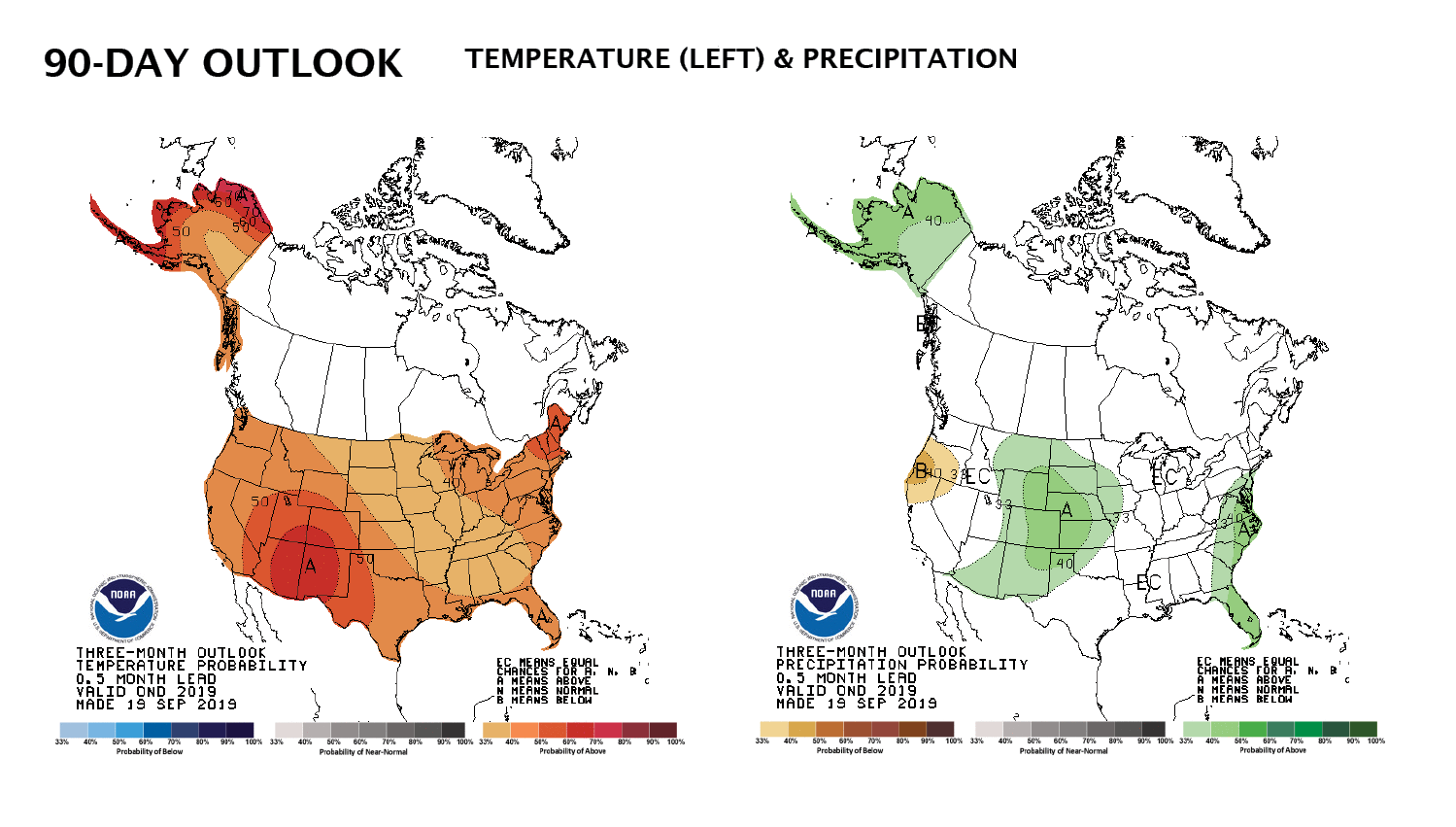 After the wettest August on record, areas of northcentral Nebraska got hit again with heavy rain. Up to 8 inches fell around Ainsworth over a two-day period, with more than 4 inches in the surrounding area. Brown and Rock counties felt the effects with one person rescued from a creek; roads and culverts washed out; and setbacks to disaster recovery from the March flood event. High water levels and flooding continues in eastern Nebraska as the Missouri River remains above flood stage from heavy rain for portions of the upper basin. By early October, river levels at Blair and points southward remain above flood stage, with moderate flooding at Brownville and Rulo, where the river was 5 to 6 feet above flood stage.

The big story for temperatures was the overall warmth, particularly for nighttime lows. Several locations had at least one nighttime low of 70°F with record high minimum temperatures. September was not without some relative cold, though, as we did experience the first fall freeze for a few locations in western Nebraska.

Parts of the state just can’t catch a break and dry out. A system that brought an onslaught of rain to South Dakota also dumped anywhere from 4 to 8 inches on parts of Brown and Rock counties on Sept. 11 and 12. For an area that suffered extensive damages with the March flood, this was certainly a setback. An observing station near Ainsworth recorded 8.01 inches over the two-day period. Our observing station two miles northeast of Ainsworth reported 4.42 inches on Sept. 12. This event was the bullseye for the September rainfall total at nearly 10 inches for the month, which is about 7 inches above average.

The other area of Nebraska experiencing a wet September was along our eastern border. A stretch of about a dozen counties received greater than 5 inches for the month, a couple of inches wetter than normal. The Omaha airport had a record daily rainfall on Sept. 19 with 2.79 inches.

The rest of the state had about an inch of rain for the month, which is just slightly below average. Overall, though, the statewide average precipitation of 2.37 inches was near normal.

Severe weather season tends to die down by this point in the year. However, there were two tornado reports on Sept. 20 in Box Butte County; 101 reports of hail, most significantly on Sept. 11 and 30; and 27 reports of high wind. The Nebraska Mesonet station near Dickens had a maximum wind gust of 75 mph on Sept. 12.

Temperatures ranged from 31°F to 101°F during September. A few locations did experience a first freeze this fall, though summer-like warmth held on as triple digit heat occurred in southwest Nebraska. September on the whole was quite warm as temperatures averaged anywhere from 3 to 8 degrees above average. Scottsbluff set a new record high for Sept. 2 of 99°F.

The statewide average for September was 68°F, which is 5.5°F above normal; this ranks in the Top 10 hottest Septembers on record. Over the last few decades, Nebraska has experienced a warming trend for the month of September.

The above-normal temperature during September sped up crop maturity, with the Nebraska Agricultural Statistics Service reporting Oct. 4 that 74% of the corn crop was mature and 86% of soybeans. This compares to the 5-year average of 95% for both corn and beans. This reduced the risk of a hard freeze to below 50% for May-emerged corn, but June-emerged corn still carried a freeze risk between 60% and 80% in the northern fourth of the state and the Panhandle.

Weather models indicated very strong storm system would cross the western and central Corn Belt during the second week of October. If it verifies, hard freeze conditions would be expected for all areas north of Interstate 80 from Nebraska through Illinois.  A further northward displacement would keep hard freeze conditions across the Dakota’s, Minnesota, and Wisconsin, sparing the remainder of the corn crop not at maturity from freeze damage and increasing the odds the crop would mature before the next hard freeze event.

Anthracnose, a fungal plant disease, was widespread across Nebraska and led corn to shut down growth early. Anthracnose overwinters in our climate and favors cool and moist conditions to propagate, both prevalent conditions through most of May and June.

According to the U.S. Drought Monitor, Nebraska is back to a blank map. The small area of abnormal dryness in the northeast (D0) was eliminated due to the above-average precipitation. With widespread wet conditions across the Plains, much of the area is drought free.

The 30-day outlook for October issued by the Climate Prediction Center at the end of September calls for equal chances for above-normal, normal, and below-normal temperatures across the entire state.  Above-normal precipitation was forecasted for the western and central Corn Belt during October.  The highest probabilities were assigned to the eastern third of Nebraska.

Looking further into the future, CPC indicates temperatures during the October to December period will average above normal for the entire United States, with the lowest odds assigned for the northern and central Corn Belt, along with much of the southeastern United States.  Above-normal precipitation is forecasted for the western Corn Belt, with the highest probabilities assigned to the western halves of Kansas, Nebraska, and the Dakota’s.  It should be noted that the 90-day forecast was issued in mid-September when a warmer October forecast was indicated, so warmth in this forecast may be overestimated for the Pacific Northwest and northern Rockies. Temperatures and precipitation east of this area will be dependent of whether additional strong snow storm development occurs during late October and November.

Nebraska’s statewide weather network operated by the Nebraska Mesonet at the University of Nebraska-Lincoln cataloged the following extremes this September: 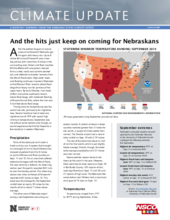