April averages on the cool and dry side of normal 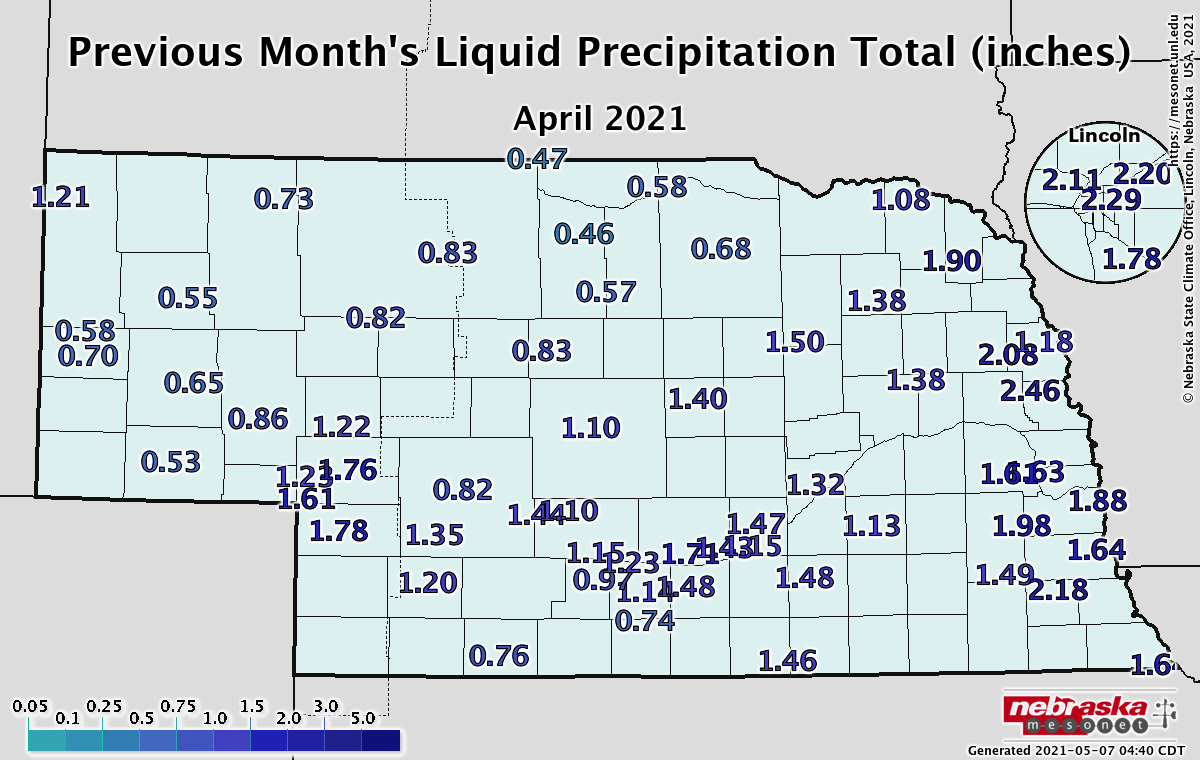 April precipitation from the Nebraska Mesonet

April precipitation from the Nebraska Mesonet 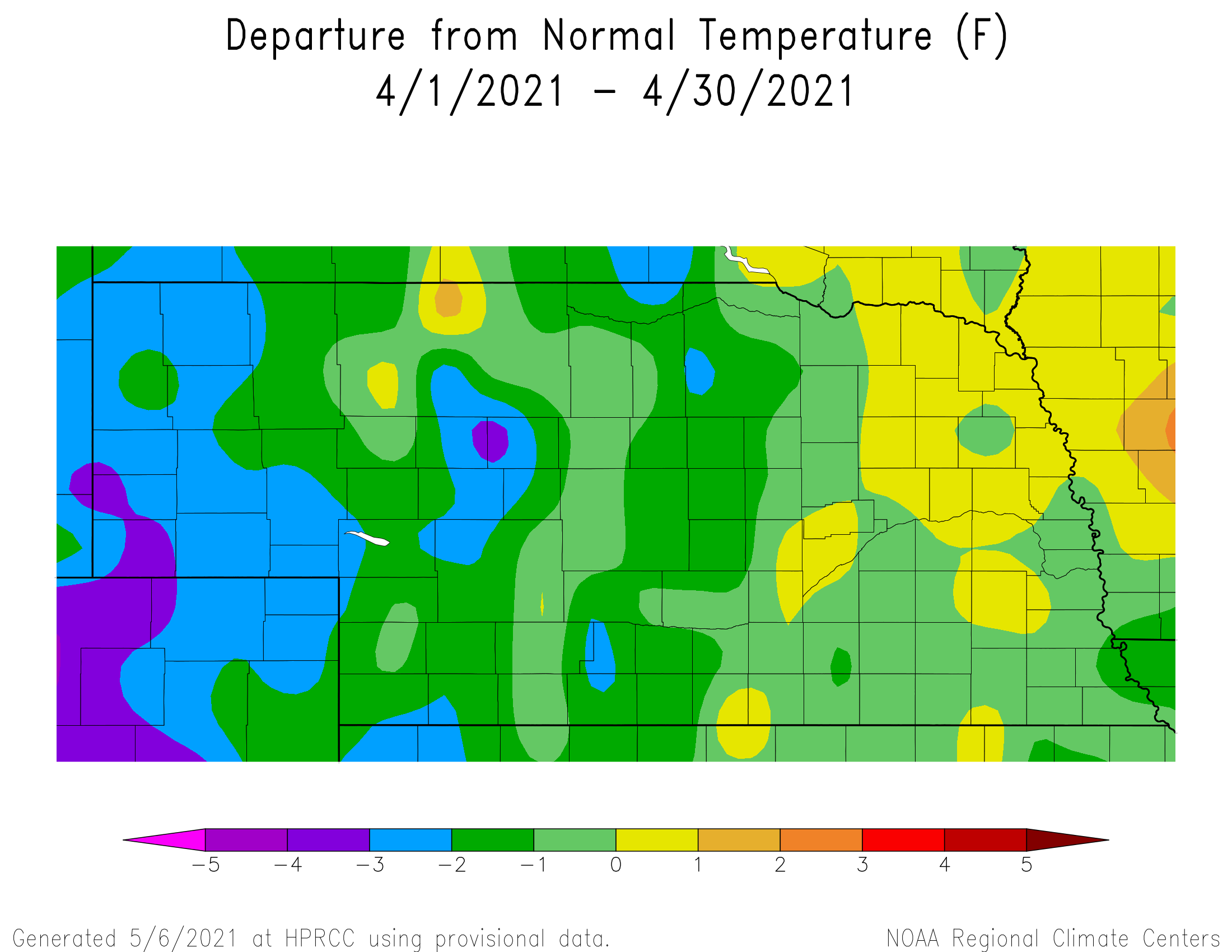 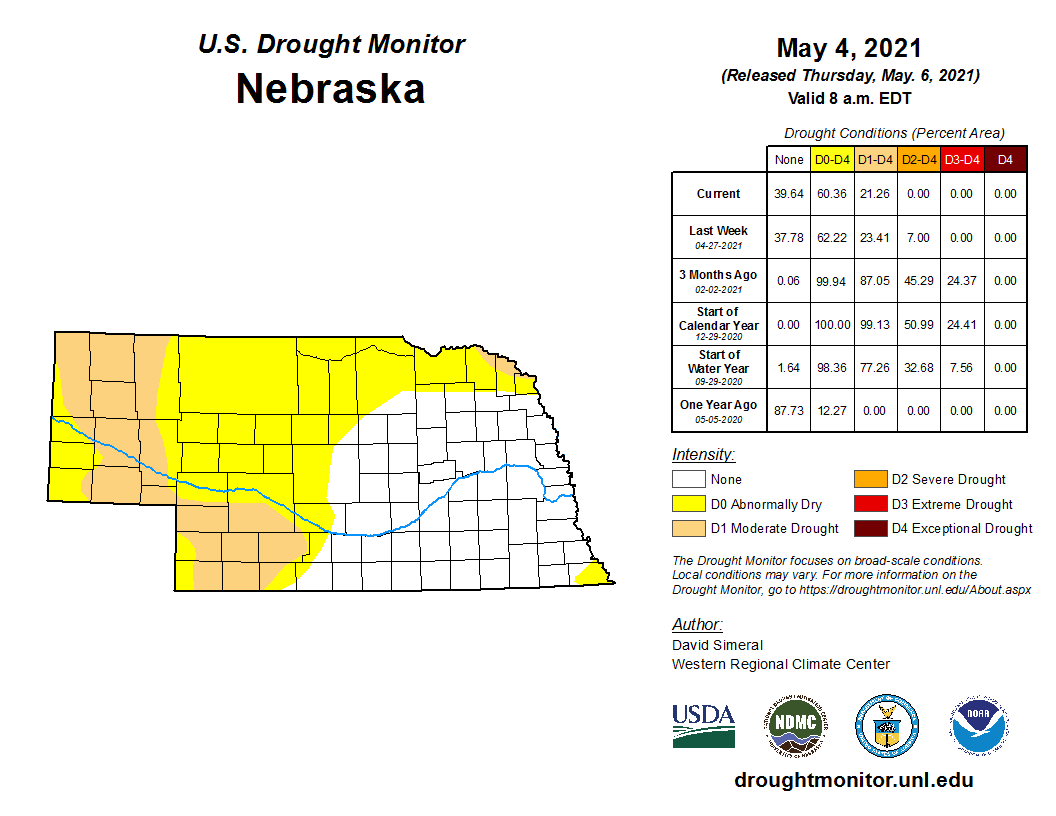 U.S. drought monitor at the start of May

U.S. drought monitor at the start of May

From snow to 90 degree heat, April brought a range of weather conditions, which is typical of springtime in Nebraska. More than six inches of snow occurred in western portions of the state. Severe weather was relatively quiet however. In a month that was a bit cooler and drier overall, there were some improvements to concerning drought conditions in southwestern Nebraska counties. However, what we need is a continuation of normal to above normal precipitation in order to avoid degrading conditions. Moderate drought now covers 21% of the state and another 40% of Nebraska is categorized as abnormally dry.

Conditions were fairly quiet given that we are into severe weather season. No tornados were reported in Nebraska during April and there were 4 high wind and 4 hail reports. The highest wind gust observed from the Nebraska Mesonet reporting stations was 50 mph near Winslow on the 5th.

Temperatures were on the cool side of normal this April with a statewide average temperature of 47.0°F. This is one degree below normal. The lowest observed temperature for the month was 6°F near Bushnell and the high for the month was 96°F at the Nebraska Mesonet site near York. Quite a few daily temperature records were broken (18 at long-term observing sites), mostly early in the month. Highs in the 80s set records across the state, from Lincoln to Chadron and points in between. The third week of the month also reported some records with lows in the single digits and teens, including 9°F at Alliance on the 21st.

Temperatures during the first 10 days of April were dominated by above normal temperatures. High temperatures were consistently above 60°F, with several days of highs pushing into the upper 70's to upper 80's. A significant cool down occurred April 11-22, with high temperatures stuck in the 40's. Corn planting was non-existent through the third full week of the month due to average daily soil temperatures consistently in the upper 30's to mid 40's. Warm condition returned the final week of April and the lack of significant rainfall led to widespread planting as average daily soil temperatures breached the 50°F threshold. Nebraska Agricultural Statistics Service (NASS) indicated that 42% of the corn crop had been planted as of May 2, an increase of 36 percentage points in one week. NASS reports one fifth of the soybean crop was also in the ground across the state. The cold weather brought several rounds of hard freeze conditions to the state during the middle of April. The wheat crop may have been advanced far enough into the jointing stage across southwestern Nebraska that some damage may have occurred. The primary concern for the wheat crop continues to be the ongoing effects of drought conditions across the southwest and Nebraska Panhandle. Eighteen percent of the wheat crop is rated in the poor to very poor category and 22% of the pasture acreage was rated poor to very poor. So even with the beneficial moisture in March and to a lesser extent in April, long term precipitation deficits from last summer and fall continue to impact acreage across the western third of the state. Moisture will need to remain normal to above normal over the next 4 months or drought conditions will expand rapidly due to the lack of deep soil profile moisture.