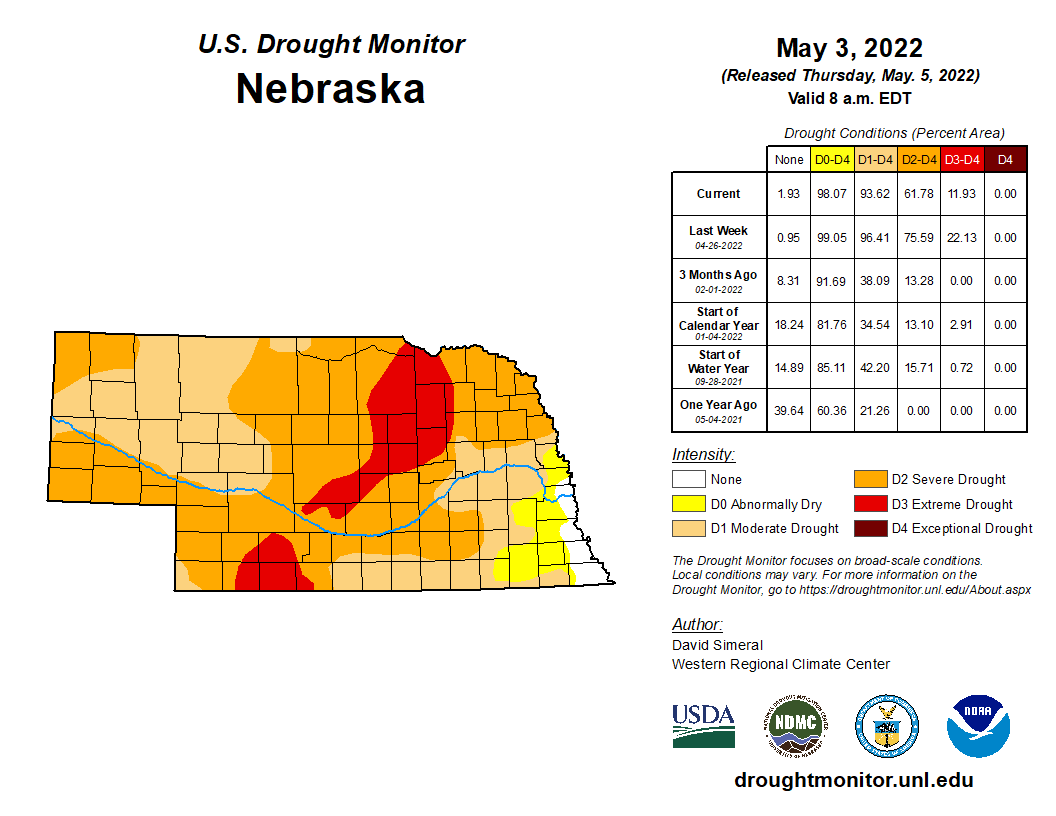 Drought conditions as of May 3, according to the U.S. Drought Monitor.

Drought conditions as of May 3, according to the U.S. Drought Monitor. 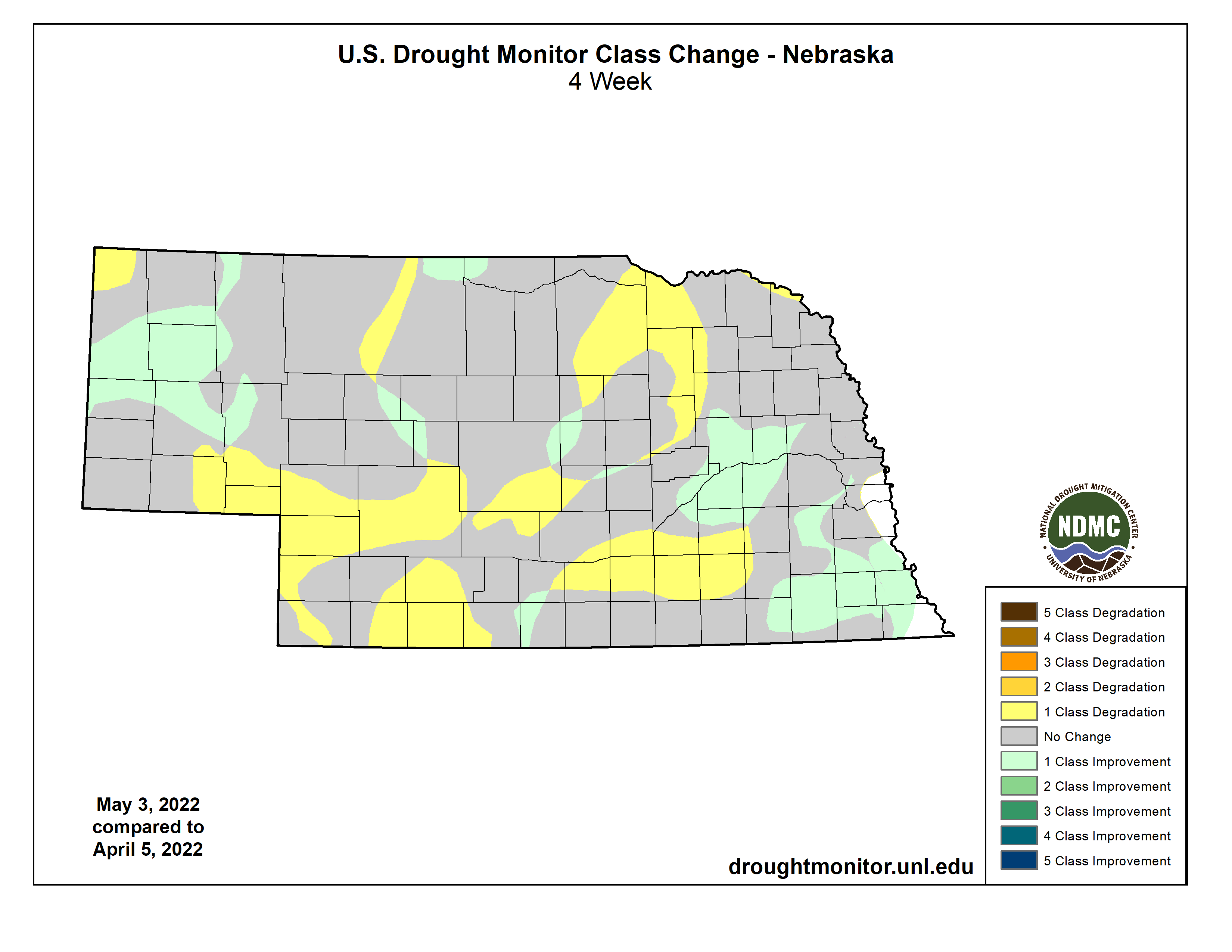 Change in drought conditions over the month of April.

Change in drought conditions over the month of April. 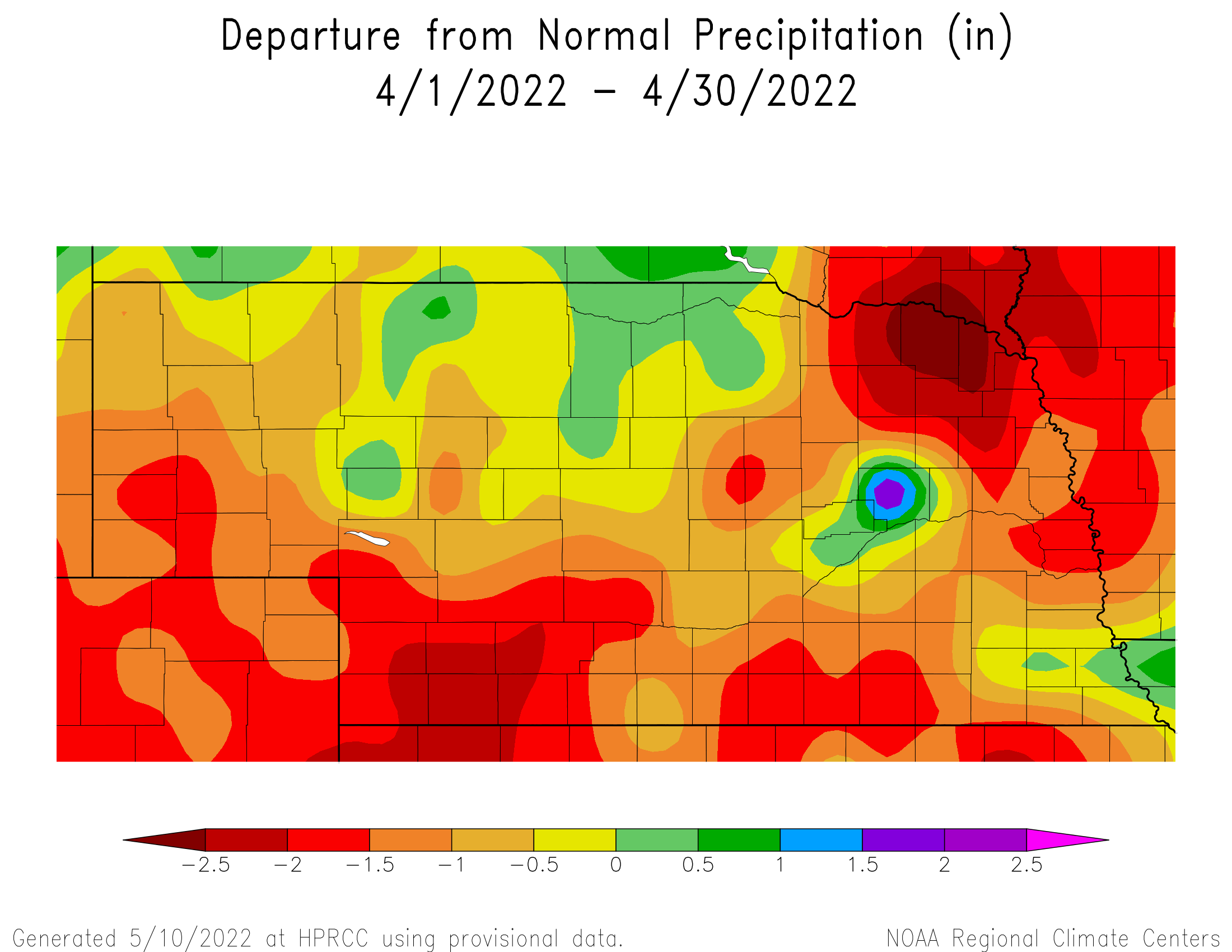 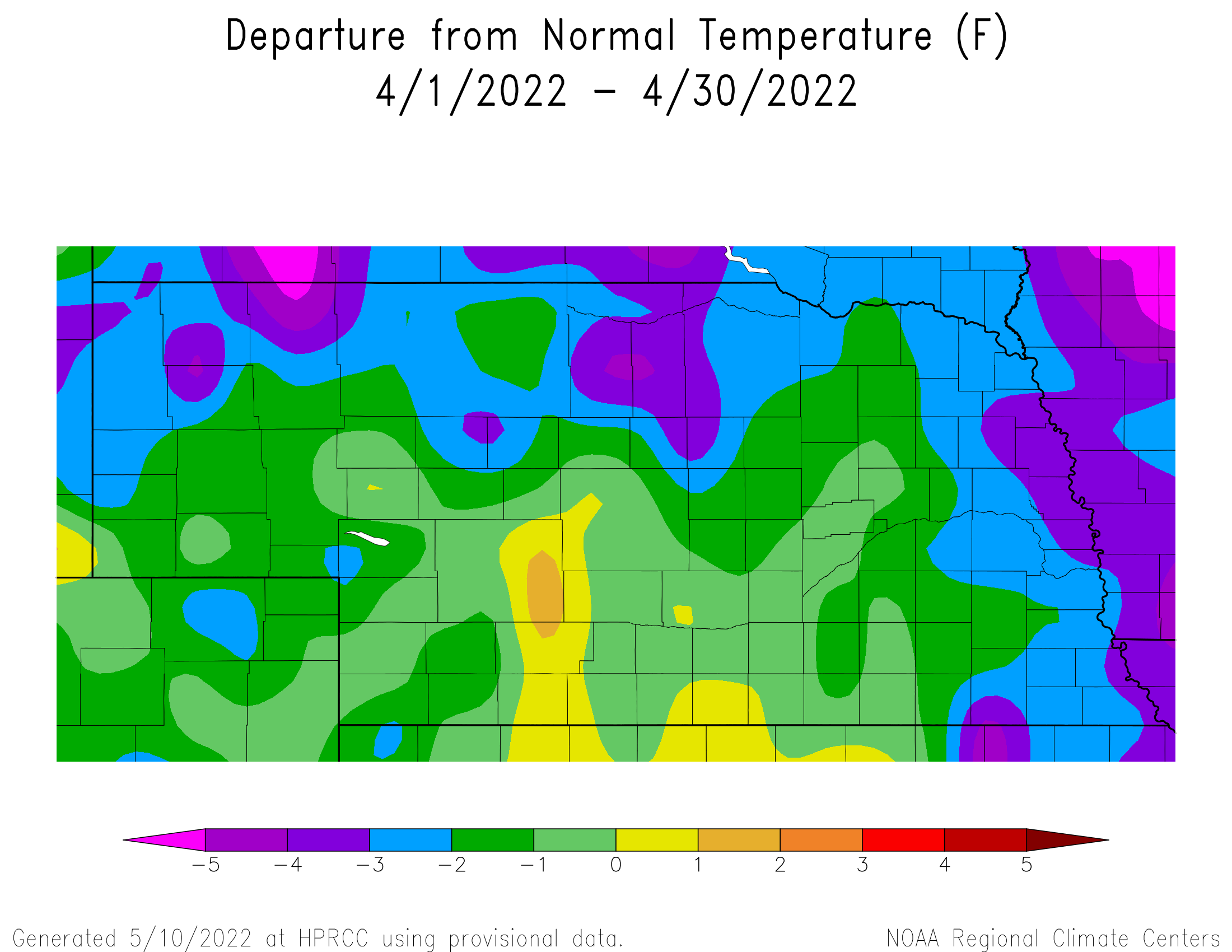 May precipitation outlook from the Climate Prediction Center.

May precipitation outlook from the Climate Prediction Center.

May temperature outlook from the Climate Prediction Center.

May temperature outlook from the Climate Prediction Center.

This April was marked by much higher than average winds, gusts well above severe category, deadly wildfires, drought degradations and record high and low temperatures. The most notable events of this active weather month were proliferation of fires, in at least 12 counties. Tragically, two deaths resulted from fires in southwest Nebraska, retired and volunteer fire chiefs. Dry conditions prevailed for most of the state and drought worsened through much of April, until much needed rainfall resulted in localized improvements by the start of May. Given the overall dryness, high wind days will amplify fire risk in the state. Year to date Nebraska is 10th driest on record (January through April). The Climate Prediction Center outlook for May trends toward wetter than normal conditions, though summer conditions look to be drier and hotter than average.

Relatively dry conditions prevailed for Nebraska this April with our statewide average almost an inch below normal at 1.61 inches. Monthly departures from normal were strongest for the northeast and southwest coming in at two inches less than our average April precipitation. Pockets of wetter than normal conditions were found in the far southeast, an isolated area northwest of Columbus and areas of north central Nebraska. More than three inches were observed in these areas. Many areas saw overall degradations in drought conditions and by the start of May, 98% of Nebraska was at least abnormally dry. Most of the state (94%) was in a drought category of moderate to extreme. The strongest departures from normal precipitation is found on northeast and southwest portions of the state. Soil moisture conditions observed at Nebraska Mesonet stations under grass cover show relatively good levels in the southeast. Rain received at the end of April was helpful for areas around the state, but not enough to completely replenish parched soils.

It was a month of records, both high and low, that averaged out to be slightly cooler than normal for much of the state. As is typical for spring, temperatures soared into the 90s several times during April and daily records were broken from Omaha to Valentine. In particular, the 22nd was the warmest day for several locations, with the high temperature coming in at 97°F at North Platte and Valentine. The Nebraska Mesonet station north of Sparks reached 96°F. Most locations statewide hit the high 80s or low to mid 90s. We did have our share of cool weather, and the average low temperature was in fact 15th coldest going back to 1895. Locations in the Panhandle bottomed out in the single digits and record lows in the 20s were reported for Omaha, Lincoln and Norfolk. Harrison reported a -15°F wind chill temperature on the 13th. The statewide average temperature of 46.4°F is 1.6°F cooler than the most recent 30-year normal. Looking at both century-long and short-term climate trends, April does not show an indication of warming or cooling.

Monthly average wind speeds were significantly higher than normal this April. Averages ranged from 14.5 to 17.5 mph, quite high for an entire month. Meanwhile, gusts over 70 mph were reported in various locations around Nebraska. Typically, monthly average wind speeds are in the 10 – 12 mph range. Two major wildfires occurred across southwest Nebraska that burned an estimated 79,000 acres of rangeland and crop fields. Unfortunately, two lives were lost during these events that were difficult to mitigate due to high surface wind speeds. During both events, blizzard conditions developed across the northern High Plains, while a dry slot ahead of the surface cold fronts developed over these fire stricken areas. Compounding the damage created by these wildfires is the low hay stock piles across the state due to the ongoing drought and the movement of forage stocks throughout the winter to the northern High Plains that went through an extreme drought during 2021. Two tornados were reported on the 12th, near Seward and Unadilla. Both hail and high wind reports also occurred around the state.

Except for the last two days of April, dry conditions during the month continued a trend that has been prevalent statewide since the end of October 2021. With below normal subsoil moisture recharge heading into the beginning of the spring planting season, winter wheat and pasture conditions continued to decline as the month progressed. Extension Educator reports indicated a large area of southwest, south central, central and north central Nebraska lacked sufficient surface moisture going into the final week of the month to germinate seed and activate residual herbicide treatments.

Colder than normal temperatures during April kept four-inch bare soil temperatures in the upper 30’s to middle 40’s during the first three weeks of the month. Planting progress was close to normal this month for oats and corn according to the Nebraska Agricultural Statistics Service. If it wasn’t for the lack of surface moisture coupled with cold soil temperature, there were enough dry stretches during the month that the planting pace would have been well ahead of the 5-year average. Rainfall the final two days of the month should provide enough moisture to seed crops, but several more events will be needed during early May to promote grass growth and develop soil moisture reserves for newly seeded crops to survive on for several weeks.

The Climate Prediction Center modified the outlook for May and transitioned to a higher probability of wetter than normal conditions across Nebraska. May is one of our wettest months of the year in the state and an enhancement of moisture would be welcome to help further alleviate longer-term deficits, though it remains to be seen of course if this materializes. Along with a wetter pattern, the CPC is calling for enhanced probabilities of cooler than normal conditions for northeast Nebraska, as well as a swath of the north central U.S. Looking further out, summer climate trends have not changed, with the CPC still calling for drier and warmer than normal conditions overall across the state.