A mid-month blizzard stuck Nebraska, dropping between 8 inches and 2 feet of snow across the southern Panhandle and northcentral Nebraska. The snow affected calving season, where some places were short shelter equipment for their livestock. April also was persistently cold, especially in the east where temperatures averaged about 10 degrees below normal. Learn more about how this month’s climate effected Nebraskans in the April edition of the Climate Update from the Nebraska State Climate Office. 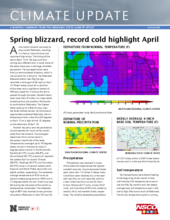