August temps below normal for Nebraska

August saw temperatures dip below normal, in some areas by as much as 5 degrees on average; it was the first time in the period of record that Norfolk and Grand Island didn't see temperatures hit 90 degrees at all any day during the month. Precipitation, on the other hand, was above-normal for much of the state. Learn more about how the variables affected Nebraskans in this month's edition of the Climate Update from the Nebraska State Climate Office. 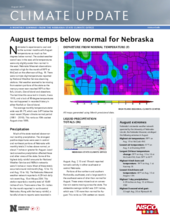