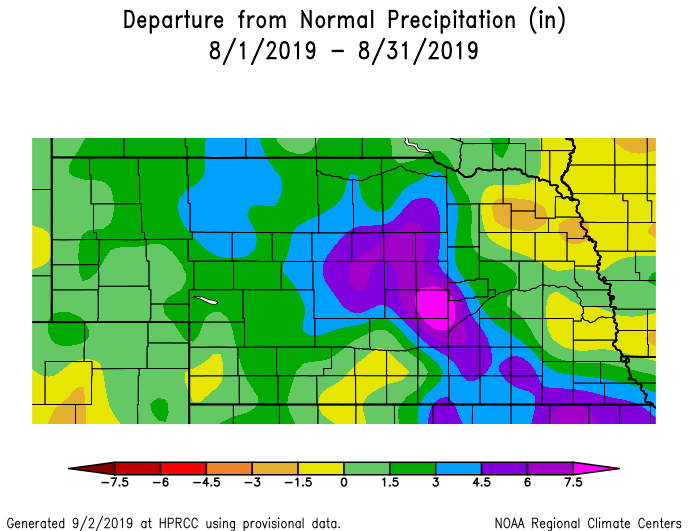 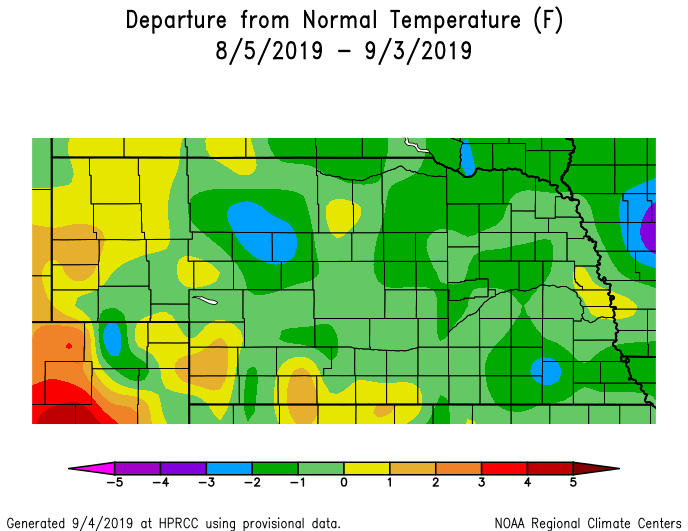 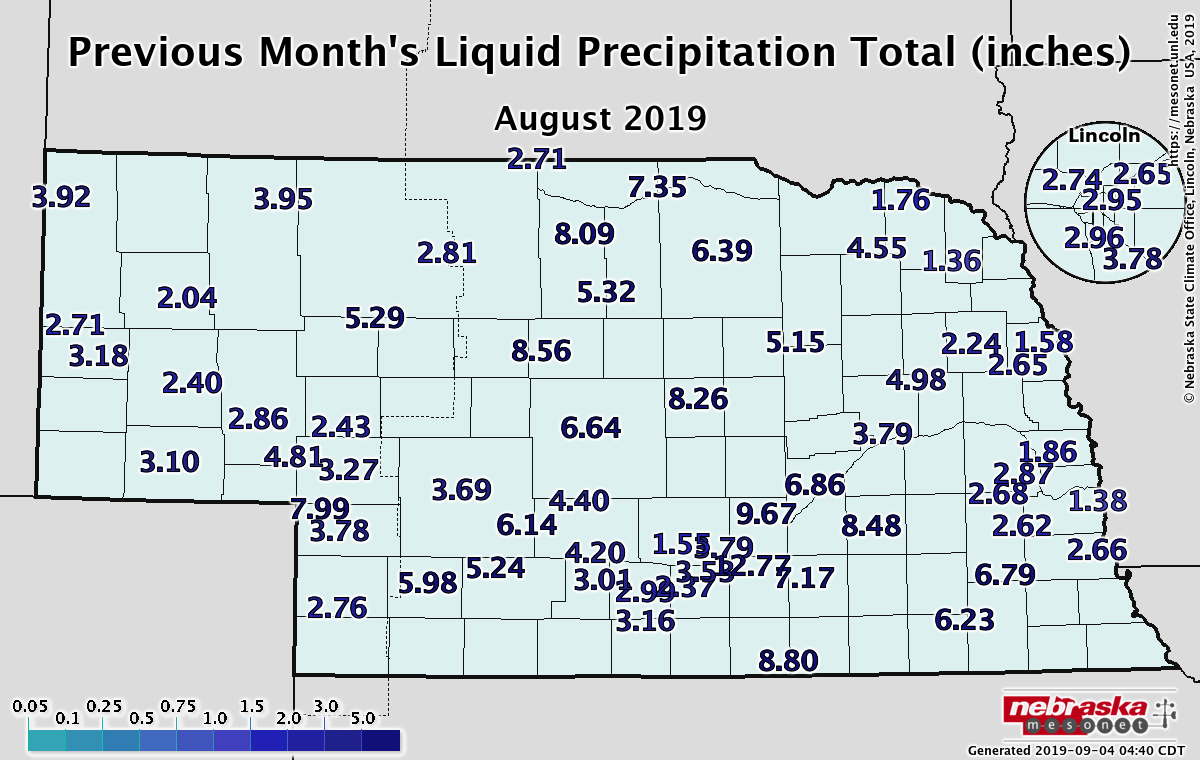 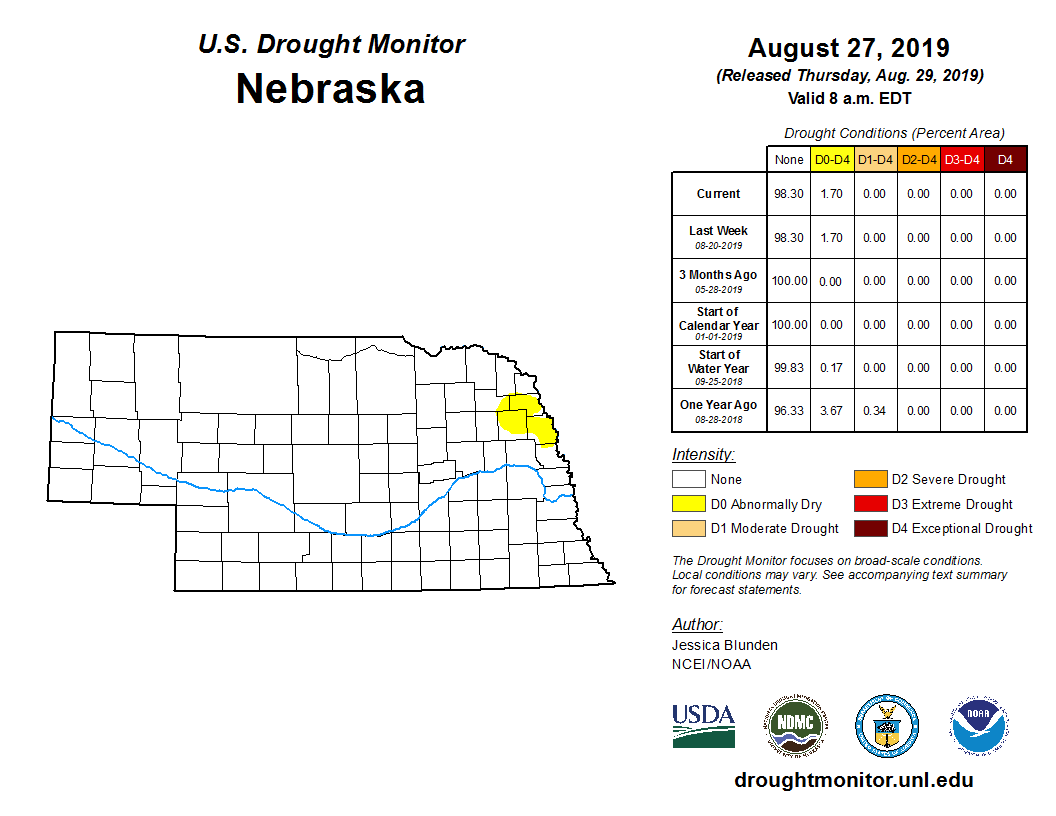 For much of Nebraska, one word can be used to describe our trend — wet. In a month when we typically start to see rainfall decreasing from its seasonal maximum in late spring and early summer, August was a bit out of character.

Central portions of the state felt the brunt of convective systems that tracked eastward during August. A swath through the central Sandhills, Lower Loup basin and down into portions of the southeast received more than 10 inches during the month, two to three times the normal amount. Records were broken for daily, monthly, and even year-to-date rainfall amounts. Minor flooding continues for locations along the Missouri River. River gauges at Nebraska City, Brownville and Rulo remain above flood stage.

Conditions were wet to very wet for much of Nebraska, except for a pocket of dryness in the northeast corner of the state. Monthly totals were at least 5 inches for about half the state, which is at least 3 inches more than a typical August. The highest monthly totals were found around Doniphan and Dannebrog with more than 16 inches.

Much of the central and southern portions had rain on more than half the days during the month. Some of that rain was very heavy at times. Omaha, Grand Island and Hastings all experienced record daily rainfall totals during August. Omaha Eppley Airport received 3.19 inches on Aug. 11; and Hastings airport set two new daily records of 2.06 inches on Aug. 23 and 1.46 on Aug. 24. The record winner, however, was Grand Island. That airport station reported 1.51 inches on Aug. 2, 1.92 on Aug. 7, and 2.22 on Aug. 25. It’s no surprise it was the wettest August on record for Grand Island at 11.94 inches. Ravenna, at 10.32 inches, and Ord, at 9.81 inches, also observed their highest August precipitation totals. The heavy rain was so widespread the statewide average precipitation of 5 inches for August also ranks as highest on record. This is more than 2 inches above normal and beats out August of 1977, which was the previous record of 4.80 inches. Looking over the past 30 years, August has trended toward wetter.

If we consider 2019 as a whole, the year-to-date totals for January through August are wettest on record for Grand Island, Hastings, O’Neill, Ravenna, Sidney and St. Paul.
Severe weather hit the Scottsbluff/Gering area on Aug. 15 and 16 with
golf-ball-size hailstones. There were five tornados reported, all of small magnitude and duration. The Alda 3W Nebraska Mesonet station near Grand Island recorded an impressive 79 mph wind gust in the early morning of Aug. 7. Around the area, storm data indicates more than 45 high-wind reports were associated with this severe weather event.

The main storyline for temperatures during August was found with the impact of cloud cover. Daytime highs were reduced and below normal while nighttime lows were elevated and above normal for the month. Average temperatures across the state were generally 1-3°F below average. A few pockets of warmth were found in the far southwest portions of Nebraska with slightly above-average temperatures. The statewide average for August was 71.7°F, which is 0.8°F below normal.

A handful of locations in the southern half of the Panhandle experienced temperatures in the triple digits, with the highest being 101°F at Broadwater. Portions of the northern Panhandle got down into the mid-30s during the month with the low of 35°F observed at Agate and Harrison.

Over the last few decades, Nebraska has experienced a warming trend for the month of August.

Forage production in the state is quite high overall given the wet conditions. However, too much rain is known to decrease the quality.

Even with a reduction in freeze risk, corn varieties of 108-day maturates or greater still carry an above-normal risk for late emergence corn (May 25 to June 15). Corn hybrids of 115 days or greater have between 80-100% likelihood of experiencing a hard freeze before kernels reach full maturity based on historical frost/freeze distributions.

The abundance of moisture and decreased solar radiation during August led to concerns disease associated with these conditions would strike.

Harvest likely will extend well into November due to late planting and lack of consistent above-normal temperatures through most of the growing season.

The abnormal dryness introduced on Aug. 1 in a few counties of northeast Nebraska were adjusted a bit during the month, according to the U.S. Drought Monitor. The area “shifted” north and now covers 1.7% of the state. The 12-month precipitation deficits in this area are in the 4-inch range.  The worst of the dry conditions stemmed back to the mid-June through mid-August period, when precipitation ranges were 50% to 75% of normal.

Looking ahead, the Climate Prediction Center’s September outlook issued at the end of August called for below-normal temperatures for the northern Plains southward through Nebraska and eastward to cover all areas north of a line from southern Iowa through the northern third of Ohio.

The precipitation outlook for September called for above-normal moisture for the state. 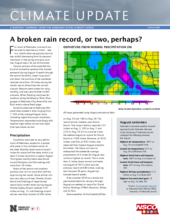