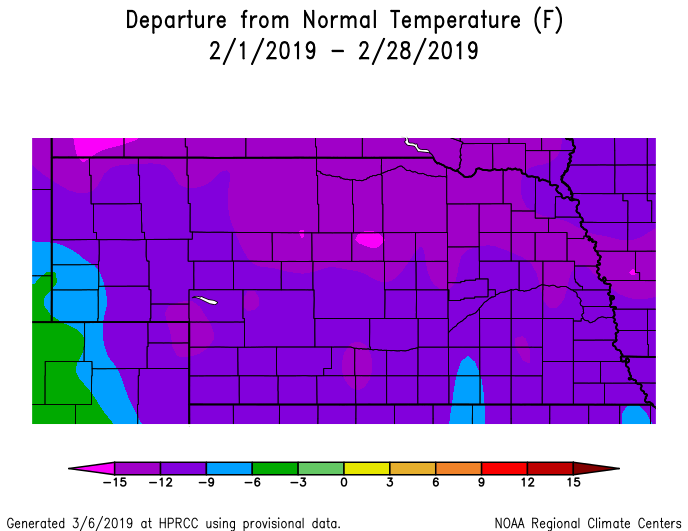 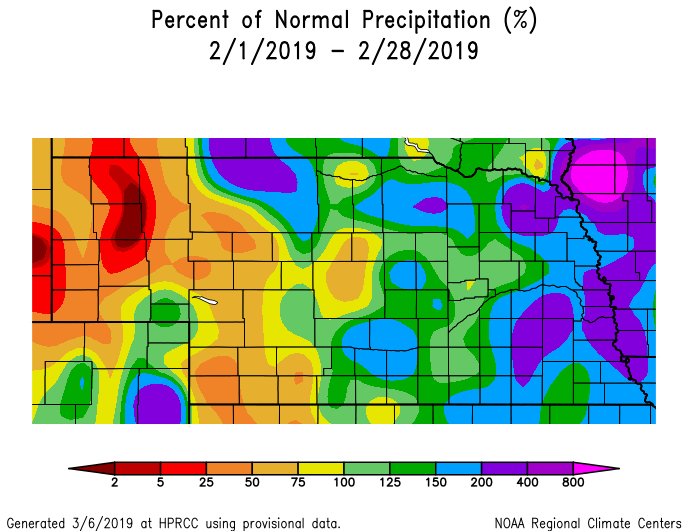 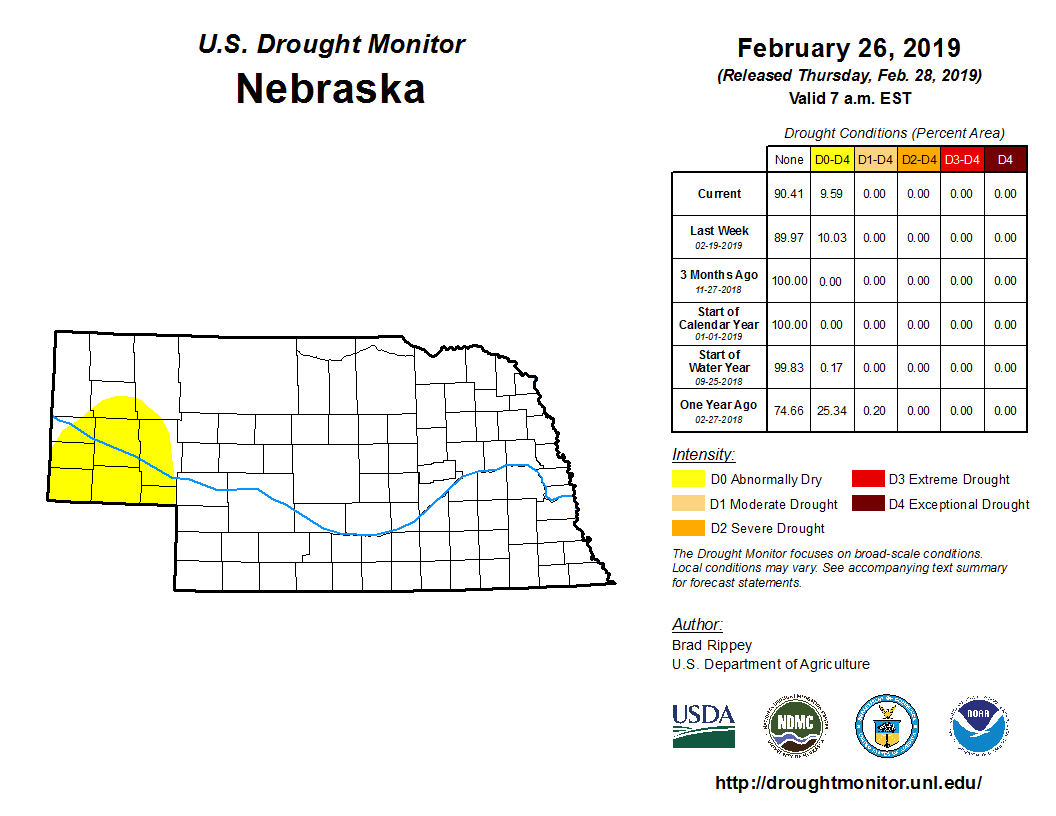 According to the National Center for Environmental Information, Nebraska statewide precipitation ranked as the 54th wettest for the period 1895-2019.

Most of the major weather events experienced during the month slid south and east of this region and had a greater impact on eastern Nebraska. An area from Omaha to Falls City along the Iowa border reported 1.5 inches to 2 inches of liquid equivalent moisture during February, while the eastern third of the state received 1 inch to 1.5 inches of moisture. Central and western Nebraska, east of the Panhandle, reported 0.5 inches to 1 inch of liquid equivalent moisture.

As expected with above-normal moisture and below-normal temperatures, snowfall totals were generous during the month, especially across eastern Nebraska. Omaha reported 27 inches during February ranking it as the snowiest February on record. Lincoln received 23.2 inches, placing it as the third snowiest on record. Some additional totals reported during February include Scottsbluff (6.4 in), Valentine (11.0 in), North Platte (10.9 in), and Norfolk (13.7 in).

Seasonal snowfall totals have been impressive across east-central and southeast Nebraska this season, due in part to nearly a foot of snow received before December. Omaha’s seasonal snow total had moved into the 12th position all time by the end of February with 49.8 inches. Lincoln ranked second snowiest with 49.2 inches, but no data was taking during the late 1950’s, 60’s and early 70’s.

There is no way to sugar coat temperatures this past February. The official state average temperature determined by the NCEI was 17.50F, a full 9.20F below normal. February 2019 is currently ranked ninth coldest since records began in 1895.

Arctic surges were the dominant theme of February as the jet stream pattern favored continual influxes of polar air masses. The mean position of the upper air trough was in the western half of the U.S. during February, keeping the cold air locked into place. A ridging pattern over the southeastern U.S. also supported a stagnation of jet stream by blocking its eastward movement.

Cold conditions were picked up by the Nebraska Mesonet as the lowest temperature in the network was recorded at Gordon 4SE with -20.20F on Feb. 7. The warmest temperature recorded from the Mesonet during February was 68.20F on Feb. 2 at Sparks 5N. Sparks 5N also had the greatest 24-hour temperature change of 50.580F from Feb. 2 to 3.

Soil temperatures were buffered from the bitter cold across much of east-central and southeastern Nebraska. However, snowfall totals across northern Nebraska were considerably lighter than the southeastern corner of the state, which protected soil surfaces from the Arctic air. Bare soil temperatures at the 4-inch depth reached 4.530F on Feb. 8 at Ainsworth 2NE after an Arctic front crossed the region and snow cover in the area was non-existent. The highest soil temperature reported from the Nebraska Mesonet was 43.60F on Feb. 2 just prior to the first Arctic infiltration of the month.

The coldest wind chill value reported was -33.00F at Harrison on Feb. 7. Thankfully, the most significant Arctic air event stayed east and north of the state when air temperatures dropped to -20 to -40 across the northern Great Plains and upper Great Lakes region. Thankfully, our peak wind gust didn’t occur with this Arctic surge or wind chill values would have been in the -40 to -600F range. The peak wind gust of 48.52 miles per hour was reported at Oakland 4W during a snowstorm with widespread blizzard to near-blizzard like conditions.

The cold conditions have made calving season especially difficult this year due to frequent precipitation events and bitterly cold temperatures. The abundance of snow cover has kept mud at bay for most of this past month, but it has also strengthened the impacts of cold weather. Producers have been reporting issues with frozen ears on newly born cattle, calving death losses from being born in bitter temperatures and high winds, and the inability to get started on spring field activities. Producers are also concerned about the elevated risk of spring flooding, muddy fields and sloppy feedlots when soils thaw out.

Drought at the present is of little concern outside of the Panhandle. Wet conditions this past fall and most of the winter for the eastern two-thirds of the state have producers more worried about excessive wetness this spring season.

However, the Panhandle has been in a persistent dry pattern since late last summer. Abnormal dry conditions were reported across the southern Panhandle and a thin sliver along the Colorado border in southwestern Nebraska at the end of January according to the U.S. Drought Monitor. The latest update at the end of February had eliminated the southwestern Nebraska dry area, but kept the abnormally dry area in the southern Panhandle the same as it was at the end of January. This translates to 9.59 percent of Nebraska’s land area is experiencing abnormally dry conditions.

CPC also indicates that precipitation during the month of March has an elevated risk of above-normal precipitation, with the highest probabilities assigned to the southern Panhandle. Since this region of the state is currently under abnormally dry conditions, some improvement in long-term precipitation deficits are possible. Further east, above-normal moisture could lead to localized flooding if the events come in the form of rain and fall on a snowpack in the 6- to 12-inch range across eastern Nebraska at the end of February. 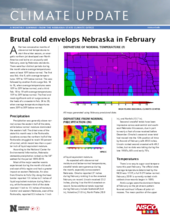