After a warmer and wetter than normal winter (Dec – Feb), Nebraska entered spring rather warm as record high temperatures in the 70s were reported around the state in early March. Conditions cooled to more seasonable readings, however we ended the month 3 degrees above normal for the statewide average temperature (19th warmest). Precipitation was characteristically mixed and included heavy rain and heavy snow events. Statewide we averaged 1.82 inches, which is 0.32 inches above normal. Soils warmed significantly and by the first week of April, temperatures at 4 inches under bare ground averaged in the 40s. The climate outlook in the short term shows good signs of a significant cool down in mid-April.

Precipitation (rain and liquid equivalent snow) totals were greatest in central and northeast Nebraska (> 2 inches, about an inch above normal) with some pockets observing more than 3 inches for the month. The rest of the state received a quarter inch to two inches. In terms of percentage of normal, the area from the southern Panhandle and southwest Nebraska through the northeast were 100% to 200% of normal for March. Relative dryness was found in the southeast and northwest corridors. The highest 24-hour rainfall occurred in eastern Nebraska with a few observing stations reporting more than 2 inches. (Coleridge, Spalding, Newcastle and the Nebraska Mesonet station near Oakland).

Snow was plentiful in portions of Nebraska as winter still held on, as is typical of this transition month. Sidney received more than a foot with 16 inches observed at a station a few miles north of town. Monthly totals for areas in the Panhandle were at least 10 inches. McCook also reported 10 inches. Totals were around 8 inches for some northern portions of the state. Central and eastern Nebraska received anywhere from 2 to 8 inches. The daily snowfall total of 2.2 inches at Grand Island on March 13 ties the previous record for this date, and 3 inches at the National Weather Service office in Hastings breaks the previous record.

Calving season was in full progress during March, and unlike last year, there have been few reports of significant losses due to inclement weather. Relatively dry conditions and above normal conditions were common during February and these conditions carried into the first 10 days of March. There was very little frost depth and a lack of snow cover, which provided ideal calving weather.  A strong storm crossed the state during the March 13-14 timeframe, bringing high winds and wind-driven snow. Moderate accumulations approaching 6 inches were reported, but warm conditions immediately following the event melted the snowpack within two days.  Another powerful system crossed the state March 26-27, bringing wind-driven snow to the Panhandle and cold rain to the central third of the state.  Some losses were expected from this system, but most losses were likely during the heart of the storm, as temperatures rebounded to melt accumulated snowfall within two days at locations reporting 4-8 inches of snowfall across the Panhandle and western Sandhills region.

On a positive note, flooding so far this spring has been minor.  Heavy rainfall has failed to materialize yet, but soils are near or at field capacity across a substantial portion of the state.  Dryness still persists across the southern Panhandle and southwestern corner of the state.  Recent storm activity has helped reduce soil moisture deficits and brighten prospects for grain producers in the region.  Daily average bare soil temperatures at the 4-inch depth on March 31 ranged from the low to mid 50s across extreme south central and southeast Nebraska to the upper 30s at isolate locations in the Panhandle and northeastern corner of the state.  Soil temperatures were in the mid to upper 40s were common south of the I-80 corridor, with mid to low 40s common across the northern third of the state. Vegetation growth appears to be several weeks ahead of last year and soil temperatures look more conducive to early planting than last year.

Precipitation forecasts for the month of April indicate that all of Nebraska, except for the extreme southern counties in the southwestern portion of the state, have a slight tendency toward above normal precipitation.  The extreme northeastern corner of the state has the highest probability of above normal moisture as it lies on the southern flank of a higher precipitation probability that lies across the eastern Dakota’s and western Minnesota.  Across southwestern Nebraska, the southernmost counties have equal chances of receiving above normal, normal, or below normal precipitation. For temperature guidance, it appears that CPC is focusing on a broad scale upper air trough across the northwestern United States resulting in a below normal temperature forecast. 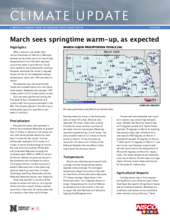