Dry and cool for much of Nebraska during March, drought worsens 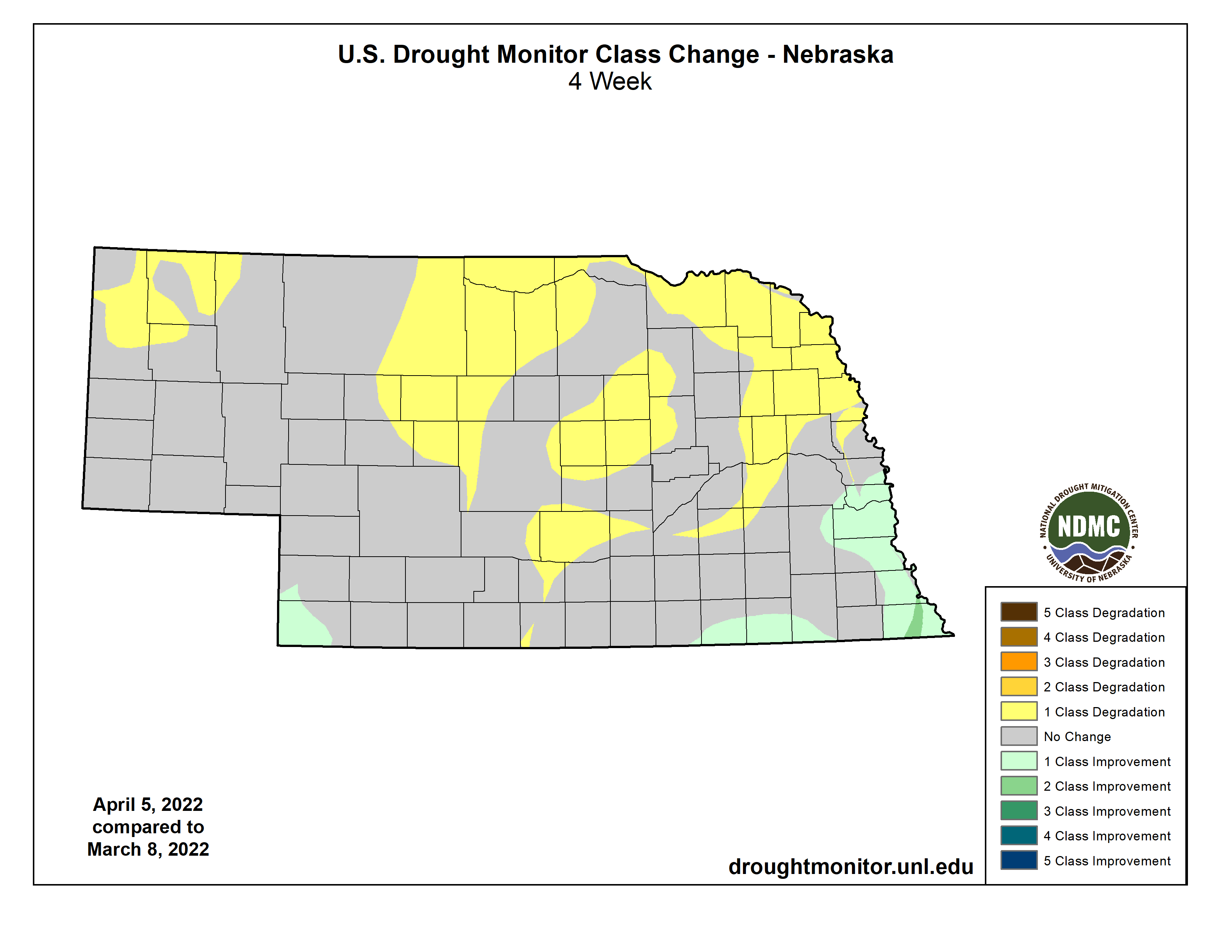 One-month change in drought conditions, according to the U.S. Drought Monitor.

One-month change in drought conditions, according to the U.S. Drought Monitor. 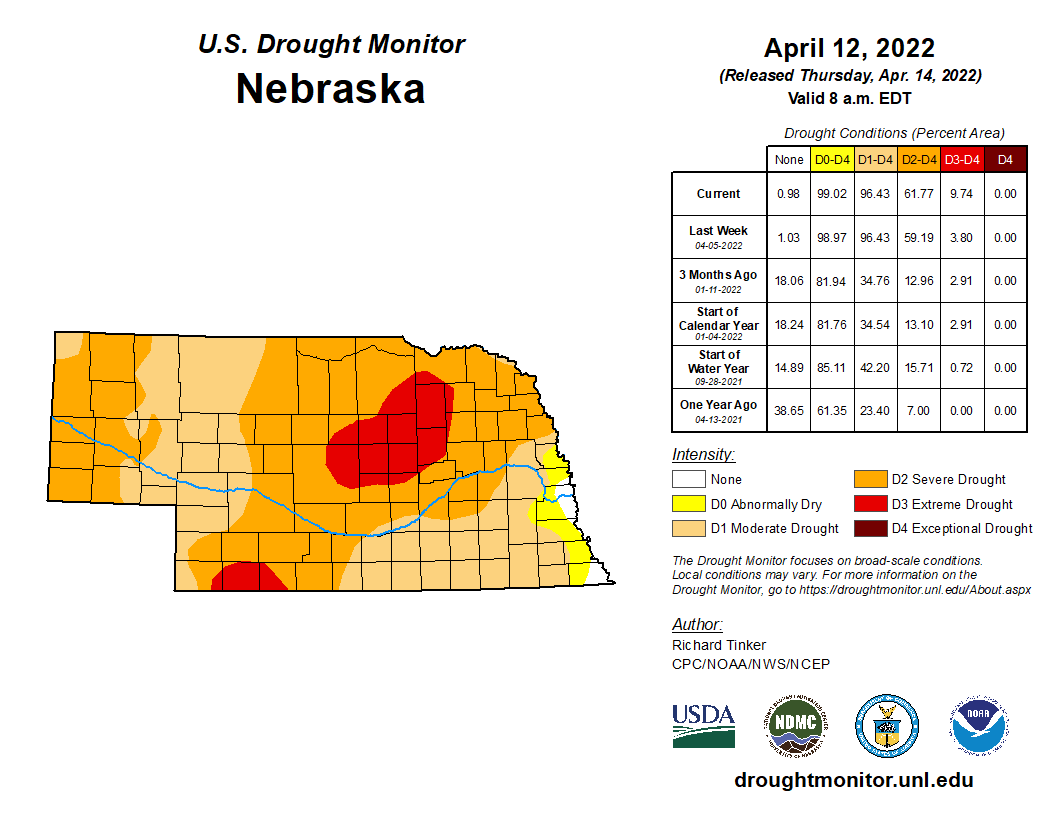 Drought conditions as of April 12, according to the U.S. Drought Monitor.

Drought conditions as of April 12, according to the U.S. Drought Monitor. 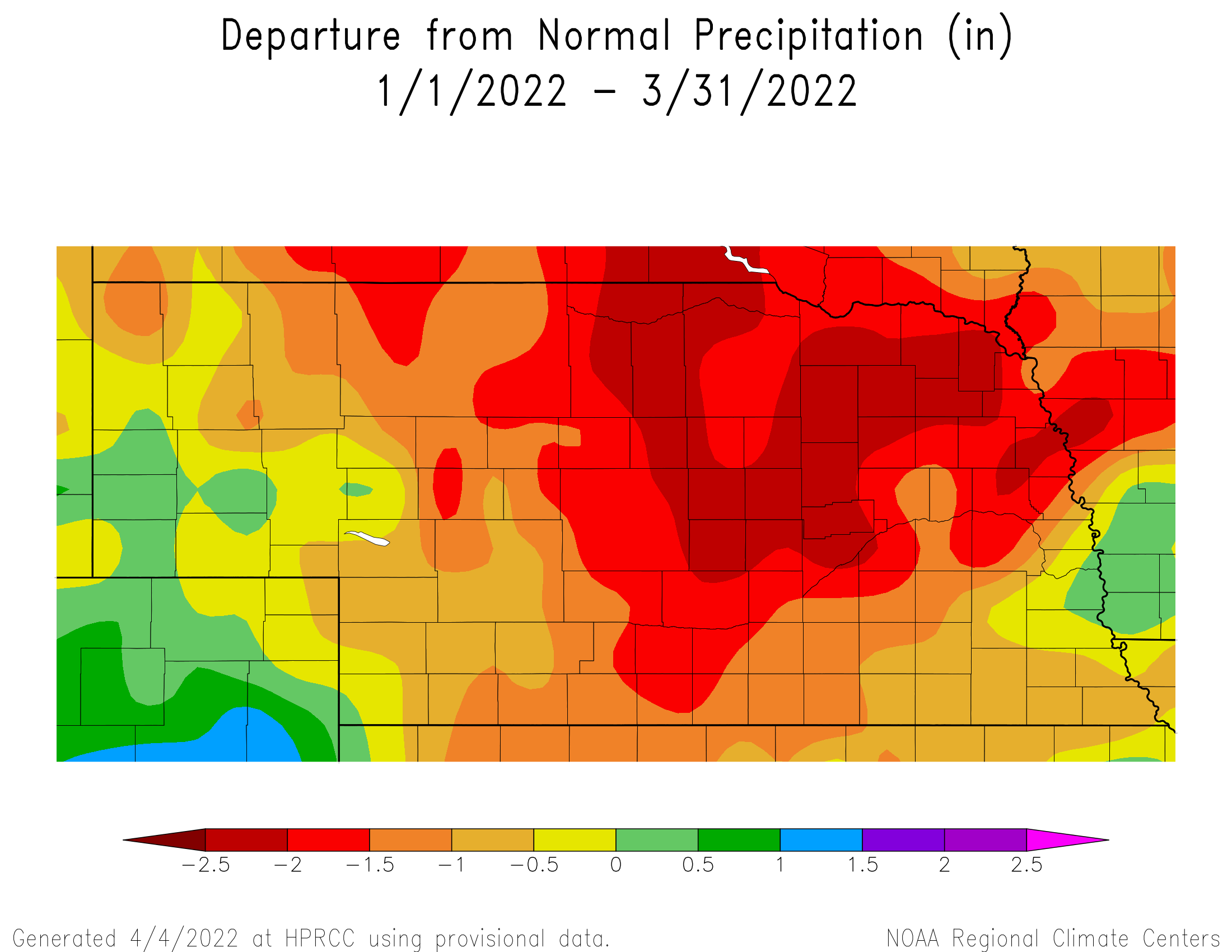 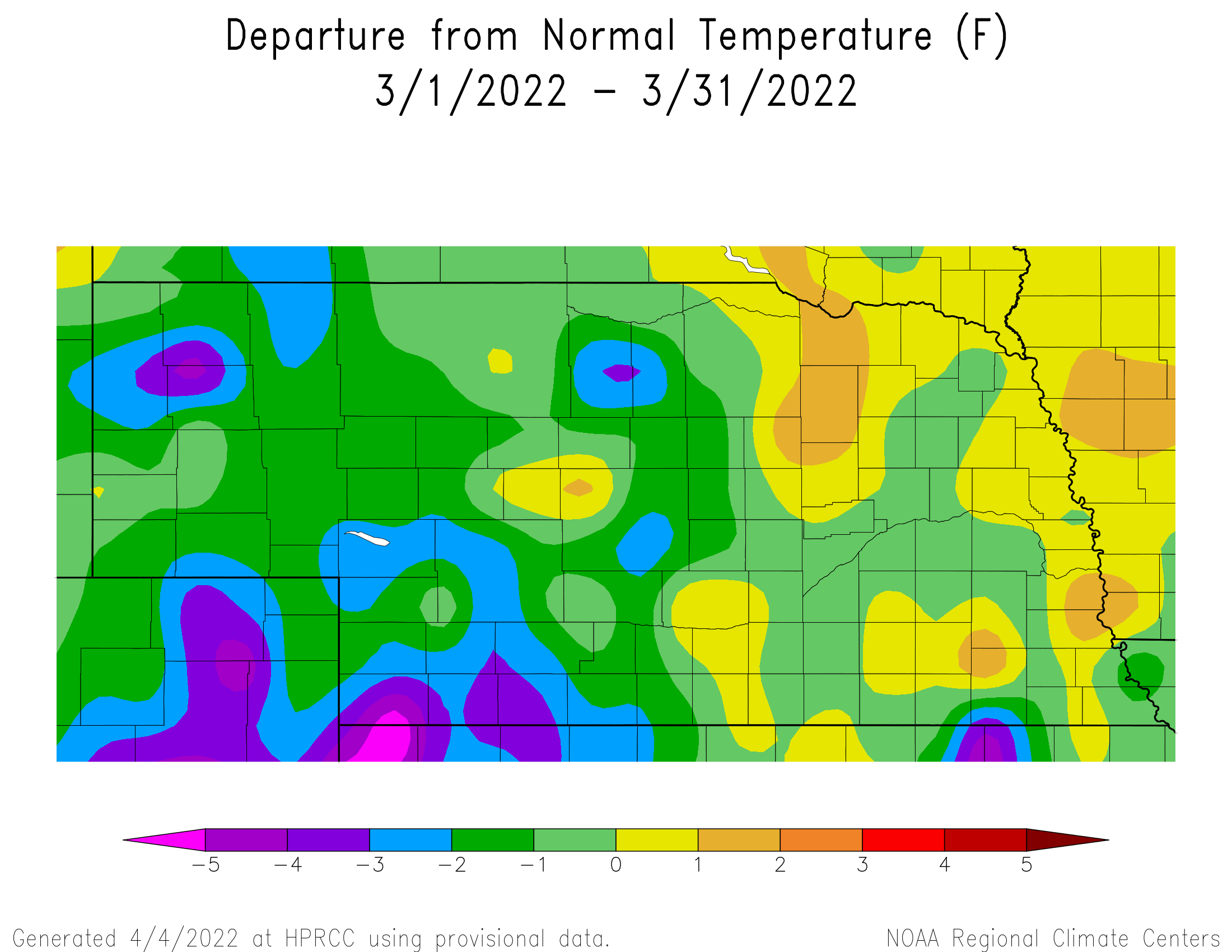 Summer temperature probability outlook, according to the Climate Prediction Center.

Summer temperature probability outlook, according to the Climate Prediction Center.

Summer precipitation probability outlook, according to the Climate Prediction Center

Summer precipitation probability outlook, according to the Climate Prediction Center 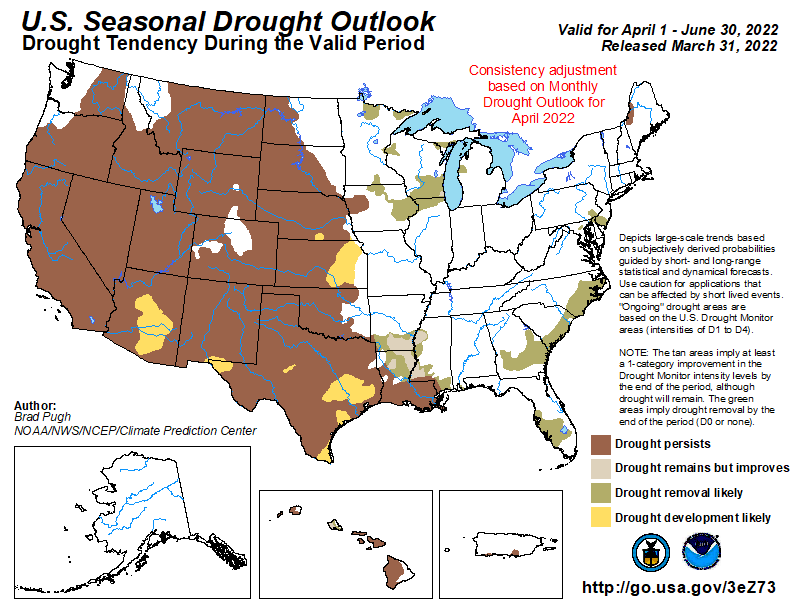 Weather conditions were drier and cooler than normal overall for March. The dryness led to an increasing coverage of drought conditions across the state. Windy days brought red flag warnings and high fire danger situations. Drought conditions as of early April shows widespread coverage and a portion of Nebraska in extreme drought due to a very dry winter season. There is not much alleviation of drought conditions expected as the summer climate outlooks are predicting a warmer and drier than normal season. Impacts are ongoing or expected for significant fire danger, low stock ponds and streams, considerations for herd culling, hay reserves and dryland cropping systems during this growing season.

For a large swath of Nebraska, monthly precipitation totals were half of normal or less. The southeastern corner and isolated areas of the southwest received above normal amounts for the month. Totals were highest in the southeast where two inches or greater were reported, some areas received 3 – 3.5 inches. The highest one-day total of 1.56 inches occurred a few miles southwest of Nebraska City on the 22nd. Elsewhere, precipitation was a scant inch or less. The statewide average of 0.80 inches is about half an inch below the 30-year (1991 – 2020) average. Over the past three decades, precipitation has increased in Nebraska; and in the long-term (century), precipitation during March has trended upward.

During March, drought conditions generally worsened across the state. The only exceptions were the far southeast and a small portion of the southwest. A continuation of dry conditions in early April led to further deterioration and intensification of the dryness. As of April 12th, 96% of Nebraska is in a drought category, 52% is in severe drought (D2) and nearly 10% is in extreme drought (D3).

The warmest temperatures statewide were found in south central Nebraska. The Mesonet station near Guide Rock (Co.) reached 87°F on the afternoon of the 29th. New daily high temperature records occurred at Omaha (79°F, 2nd) and Lincoln (81°F, 2nd, 80°F, 20th). Most locations around the state did reach single digits and several areas of the Panhandle were well below zero. Cooperative observer stations near Harrison and Agate reached -20°F on the 10th. The Nebraska Mesonet station a few miles northwest of Harrison reported a -33°F wind chill temperature, also on the 10th.

The first two of the year were reported on March 29th. One hail report in Valley County 1 mile NNE of Arcadia (1 inch hail), one wind event in Cass county 2 SSE of Union (Shed damage, unknown wind speed). On the 30th, the Nebraska Mesonet station near Dunning (Halsey Co.) reported a 53 mph wind gust (at 9 ft above ground). This was the highest across all Mesonet stations during March.

Looking further out, the summer seasonal climate outlook issued by the CPC is calling for an enhanced probability of above normal temperatures coupled with below normal moisture. This temperature and precipitation probability combination covers much of the Central U.S. As such, the seasonal drought outlook calls for drought persistence through Nebraska and elsewhere in the western half of the U.S.

The northwestern three-quarters of Nebraska received less than an inch of moisture during the month of March, with the northwest and north central Sandhill region reporting less and 0.50 inches. Areas south and east of a line from Omaha to Lincoln to Beatrice received 2.5 to 3.5 inches of moisture. Temperatures averaged 1 to 4°F below normal over the western half of the state, while the eastern half of Nebraska experienced temperatures ranging from 1° F below normal to 2° F above normal.

Although a more active weather pattern developed during the month compared to our exceptional dry winter period, the vast majority of moisture with these systems fell to our south across the eastern half of Kansas, Oklahoma and Texas. Very strong winds were associated with low pressure systems passing south of the state, which increased the fire danger across the state due to low relative humidity levels and delayed surface vegetation growth from the lack of moisture and frequent low temperatures in the 20’s and 30’s.

Wheat began to green up during the second half of March increasing moisture stress across south central, southwest and the Panhandle of Nebraska. Cooler than normal March temperatures slowed down alfalfa and growth, but did allow for good calving weather across the northwestern three-quarters of the state. Stock ponds, streams and rivers continue to show below normal levels due to the ongoing dryness and will continue until widespread above normal moisture develops on a time scales of several months instead of several weeks at time.