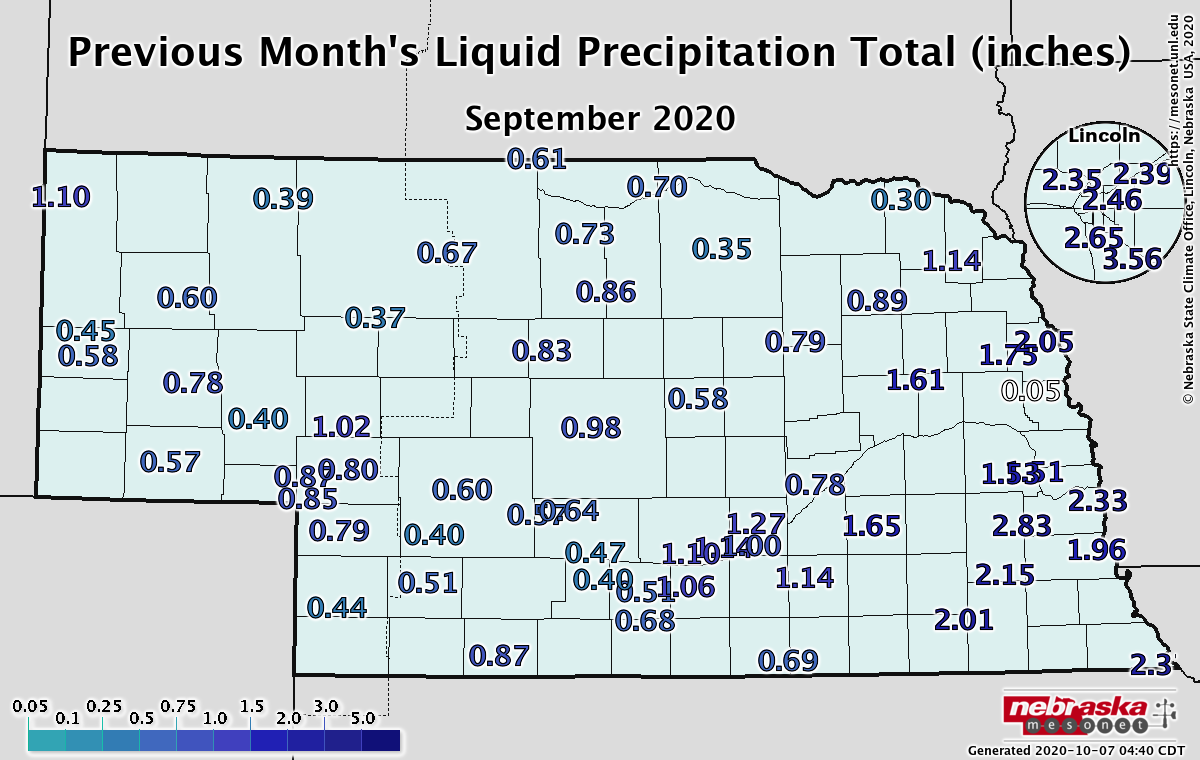 September Precipitation from the Nebraska Mesonet

September Precipitation from the Nebraska Mesonet 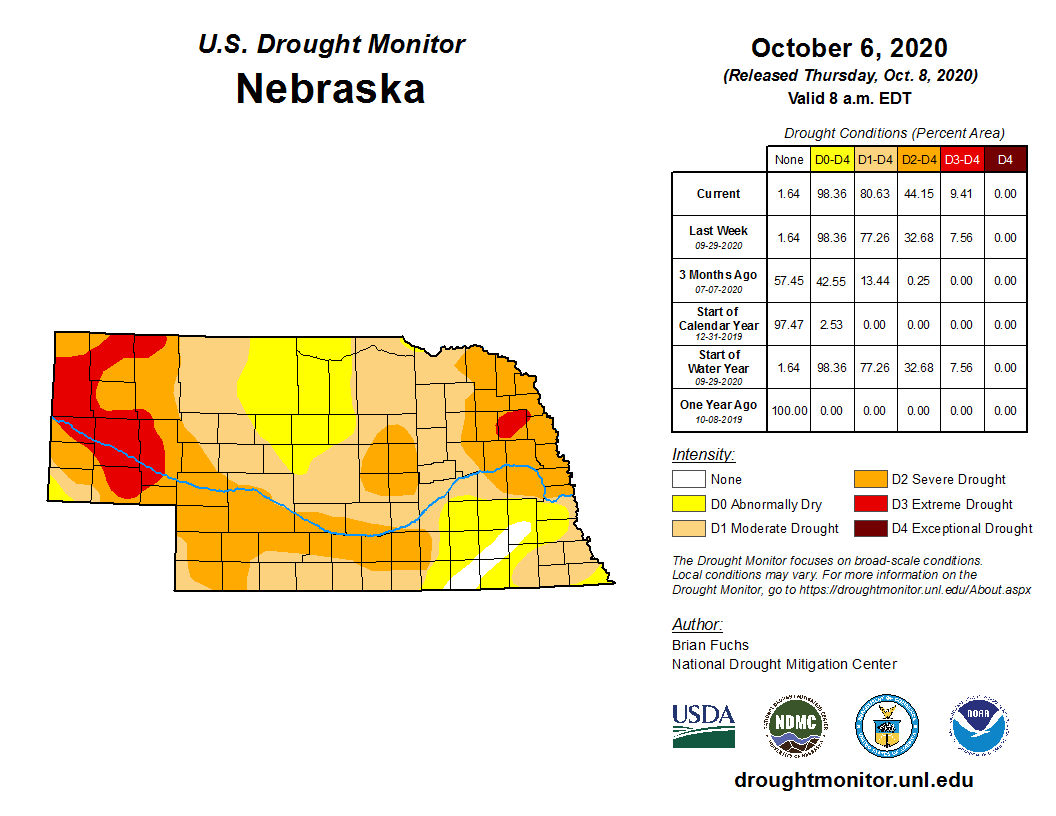 This month’s highlights for Nebraska include significant expansion of drought and dryness conditions in what was the 17th driest September on record. According to the U.S. Drought Monitor, at the start of October, all but 2% of the state was abnormally dry, with 80% moderate drought or worse. Although temperatures averaged to near normal, a plethora of daily records were set – both record low daytime high temperatures (mostly in the east) and record high temperatures above 100°F in the west. Temperatures fell below freezing for about half the state during September.

Another month of below average precipitation impacted Nebraska. Rainfall totals were anywhere from 0.75 to 2.25 inches below normal with most locations receiving rain on a handful of days. The highest amounts were in the east at around 2 – 3 inches while the rest of the state received an inch or less. Overall, Nebraska had the 17th driest month on record at 1.01 inches for the statewide average, which is 1.16 inches less than normal. Historically, September has not seen any appreciable precipitation trend over time.

The big story for temperatures around the state was the magnitude and amount of daily records set or tied. Early on in the month, several daily highs above 100°F were reported, such as 106°F in Valentine on the 5th. New all-time highs for the month of September were also set on the 5th in Alliance (103°F), Chadron (106°F) and Scottsbluff (105°F). Later on in September, more daily high temperature records occurred in the central and west – 95°F in Valentine on the 22nd and North Platte on the 24th, 94°F in Scottsbluff, 93°F in Chadron and Hastings, and 92°F in Alliance on the 24th. We were not without cold weather, however, with record low daily high temperatures in the 40s and 50s on the 8th and 9th in Omaha, Lincoln, Norfolk, Grand Island and Hastings. The month overall ended near normal, slightly cooler conditions in the east, with a statewide average temperature of 62.7°F, which is just 0.2°F below normal.

An unusually strong and cold storm system impacted most of the central third of the country Labor Day week. This slow-moving system brought snow to the Panhandle and hard freeze conditions, while most areas outside of southeastern Nebraska received 0.25 to 0.75 inches of moisture. A band of 1-4 inches of rainfall occurred over portions of southeast Nebraska from Fairbury northeastward through Omaha.

The cool conditions during early September slowed crop development and grain dry down in mature fields. According to Nebraska Agricultural Statistics Service (NASS), only 4 percent of the corn and 3 percent of the soybeans were harvested as of September 13th. Even though temperatures rebounded the week after the storm, western wildfires impeded proper grain drying due to an abundance of high clouds blocking direct solar radiation at the surface.

Above normal temperatures and a lack of storm activity saw harvest activity ramp up, particularly the last 10 days of the month. NASS indicated that 29% of the soybeans and 14% of the corn had been harvested by September 27th, the last official release of September. With short term forecasts pointing toward above normal temperatures and no precipitation the first 10 days of October, substantial harvest progress is expected.

More concerning for Nebraska producers has been the rapid expansion of drought conditions the past two months, due in part to below normal moisture and above normal temperatures during the month of August. As of September 29th, there are very few areas of the state that are haven’t been assigned abnormally dry (DO) or worse. In fact, extreme drought (D3) now covers the Platte river valley within the Panhandle of Nebraska. Without good fall moisture, this area is likely to expand eastward as the fall progresses.

The Climate Prediction Center (CPC) outlooks for October issued September 30th indicates that above normal temperatures and below normal precipitation are likely across Nebraska. Although there is consistency between the preliminary outlooks issued September 17th, the differences boil down to the position of upper air ridge across North America.

The CPC’s temperature outlook has undergone the most significant change from the preliminary release in mid-September. That outlook projected above normal temperatures for the entire United States east of the Pacific Northwest. Their updated outlook has shifted the above normal temperature over the western two-thirds of the United States, with areas of the southeastern U.S. projected to see below normal temperatures. The updated precipitation forecast is particularly concerning for Nebraska in light of the fact that October begins the soil recharge season for 2021 crops. With drought conditions so firmly entrenched across the state, subsoil moisture reserves have been depleted to the extent that below normal moisture this fall will lead to further drought intensification.

The CPC outlook for October has shifted the core area of below normal temperatures projected for the southern High Plains on September 17 northward to include the entire High Plains region. Of critical concern is that highest probability of below normal moisture now lies directly over Nebraska. Based upon short term models at the end of September, there appears to be no indication of significant moisture developing through the first 13 days of October. 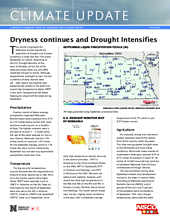