Dryness continues as we round out winter 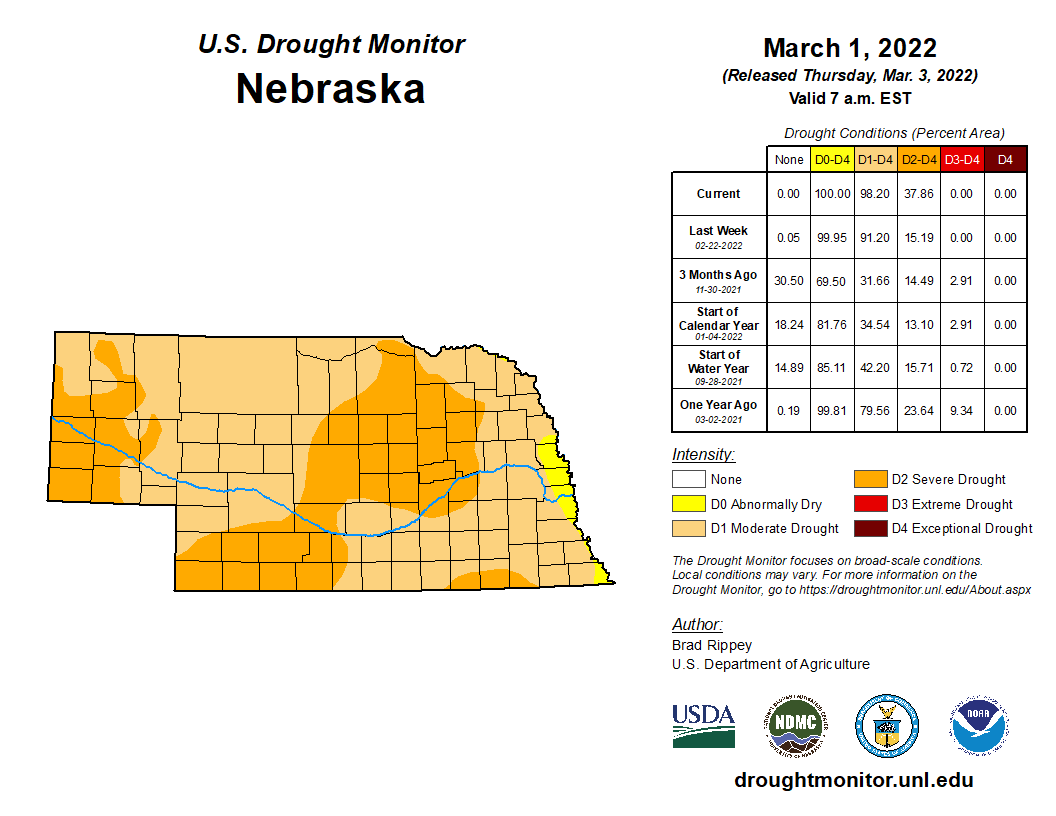 Drought conditions as of March 1, 2022 (US Drought Monitor).

Drought conditions as of March 1, 2022 (US Drought Monitor). 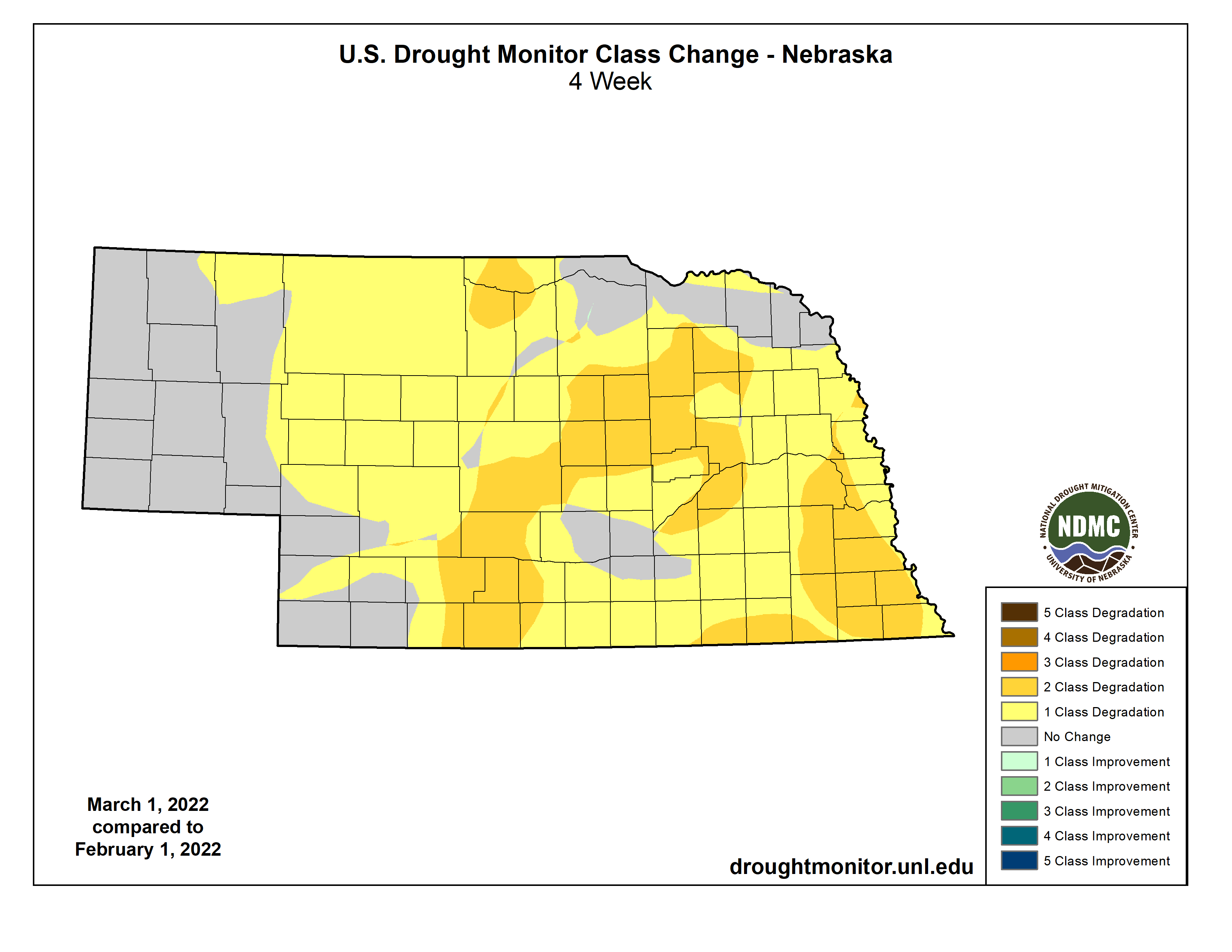 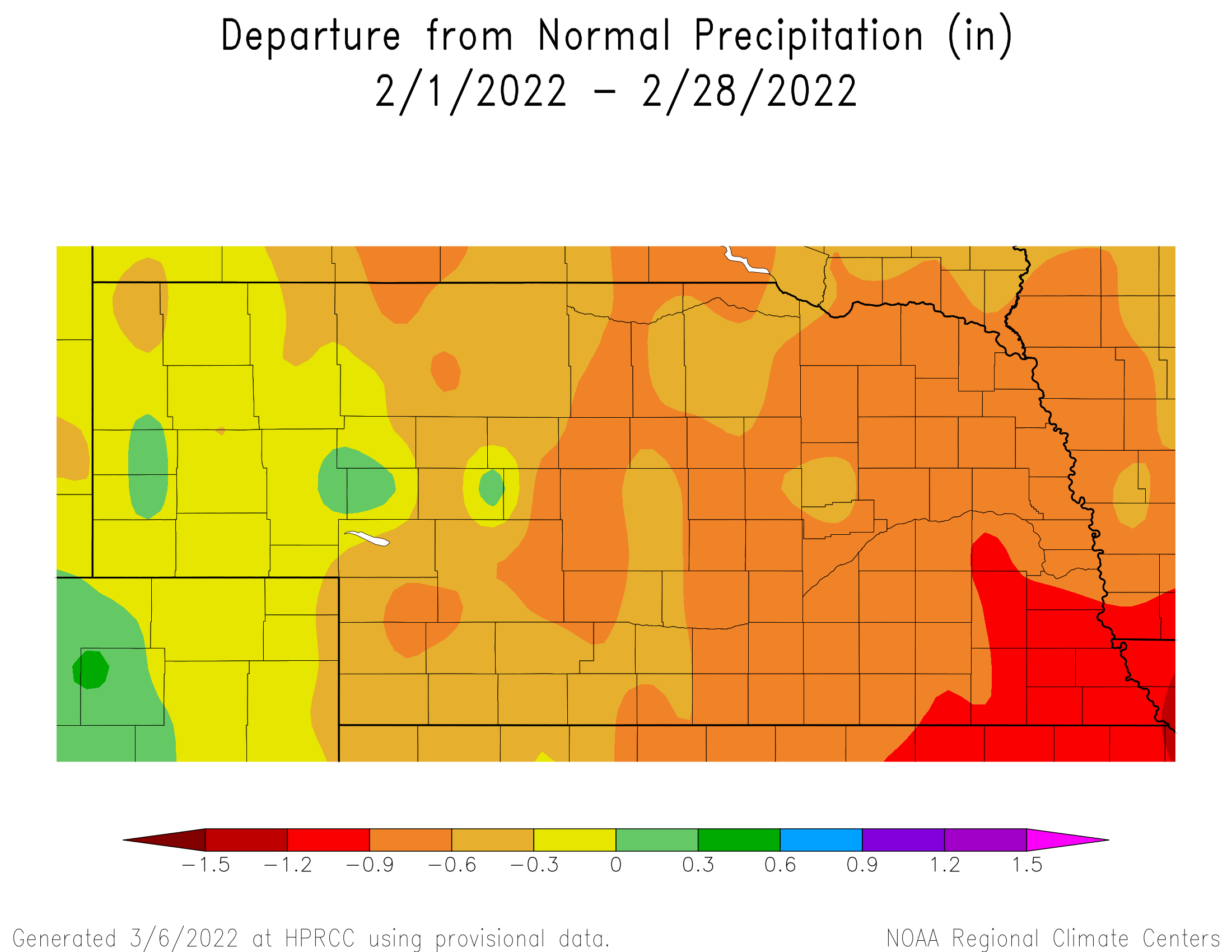 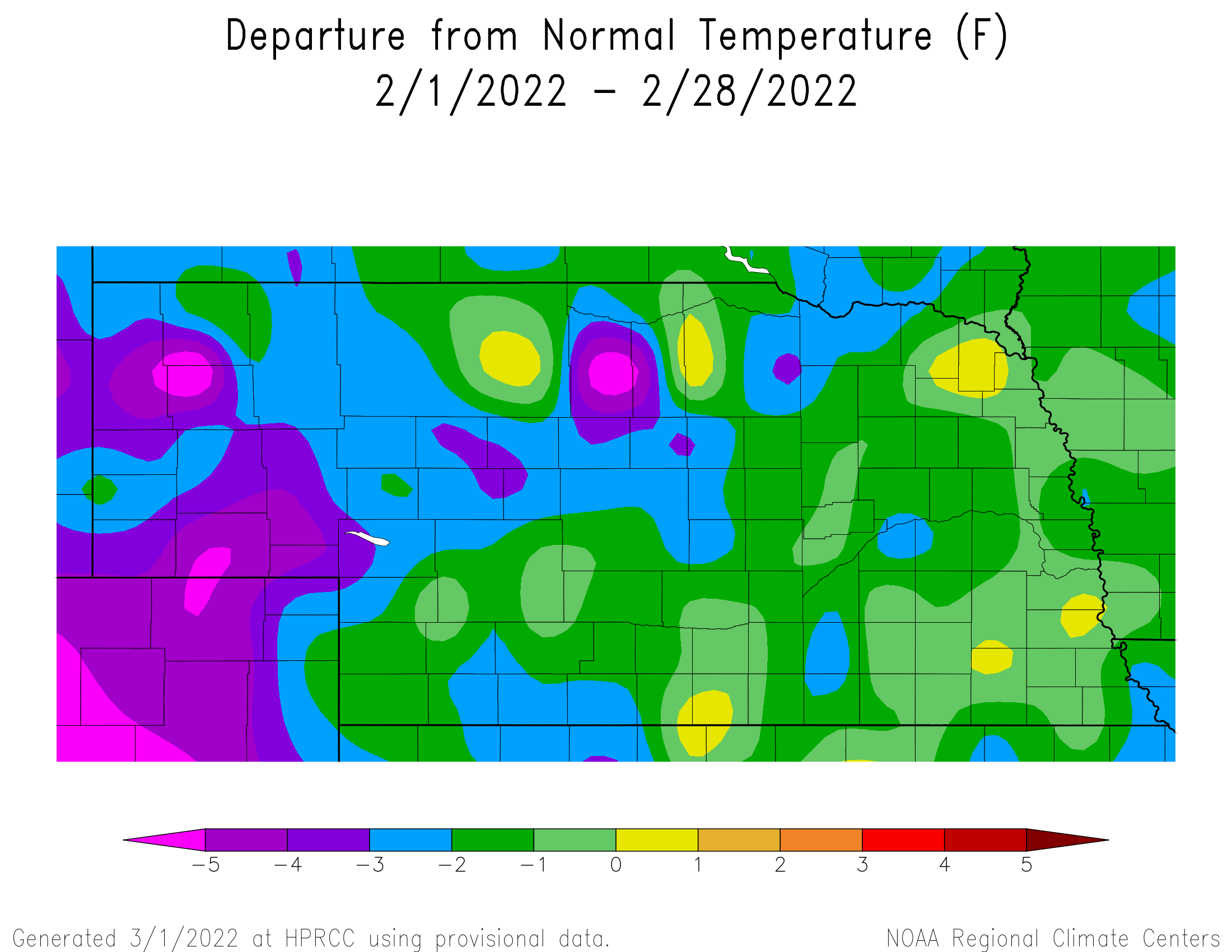 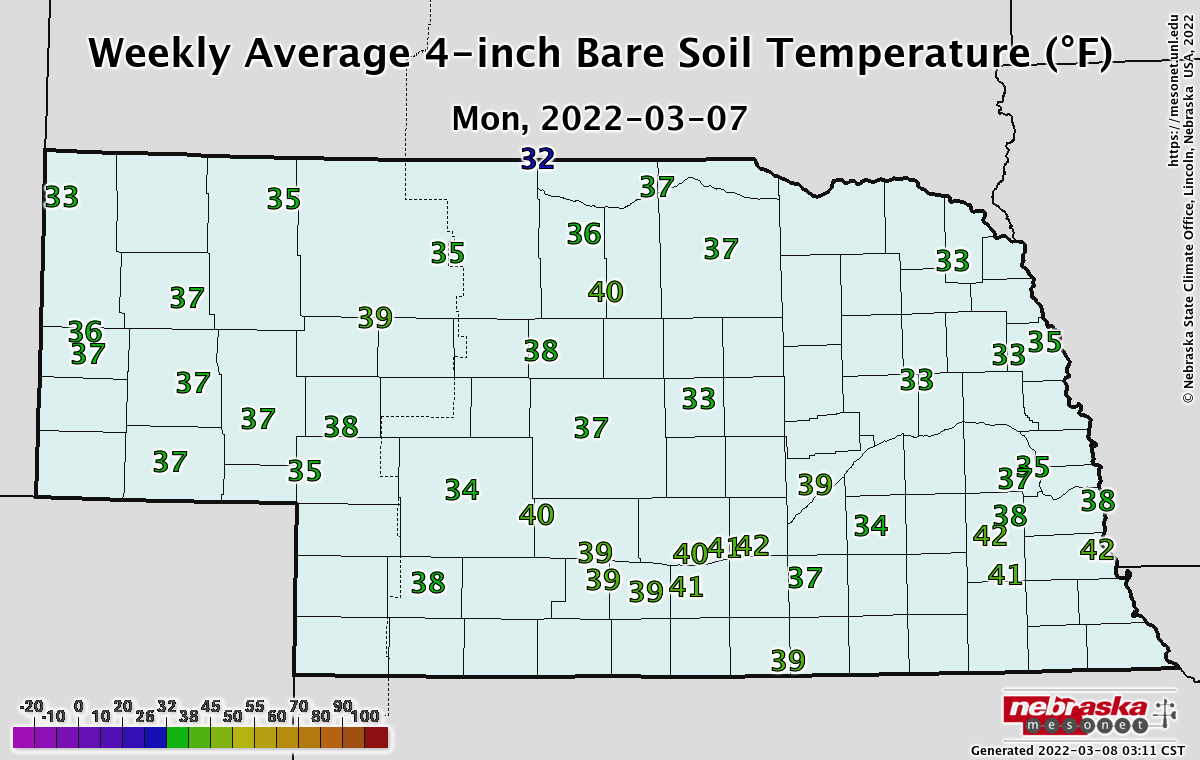 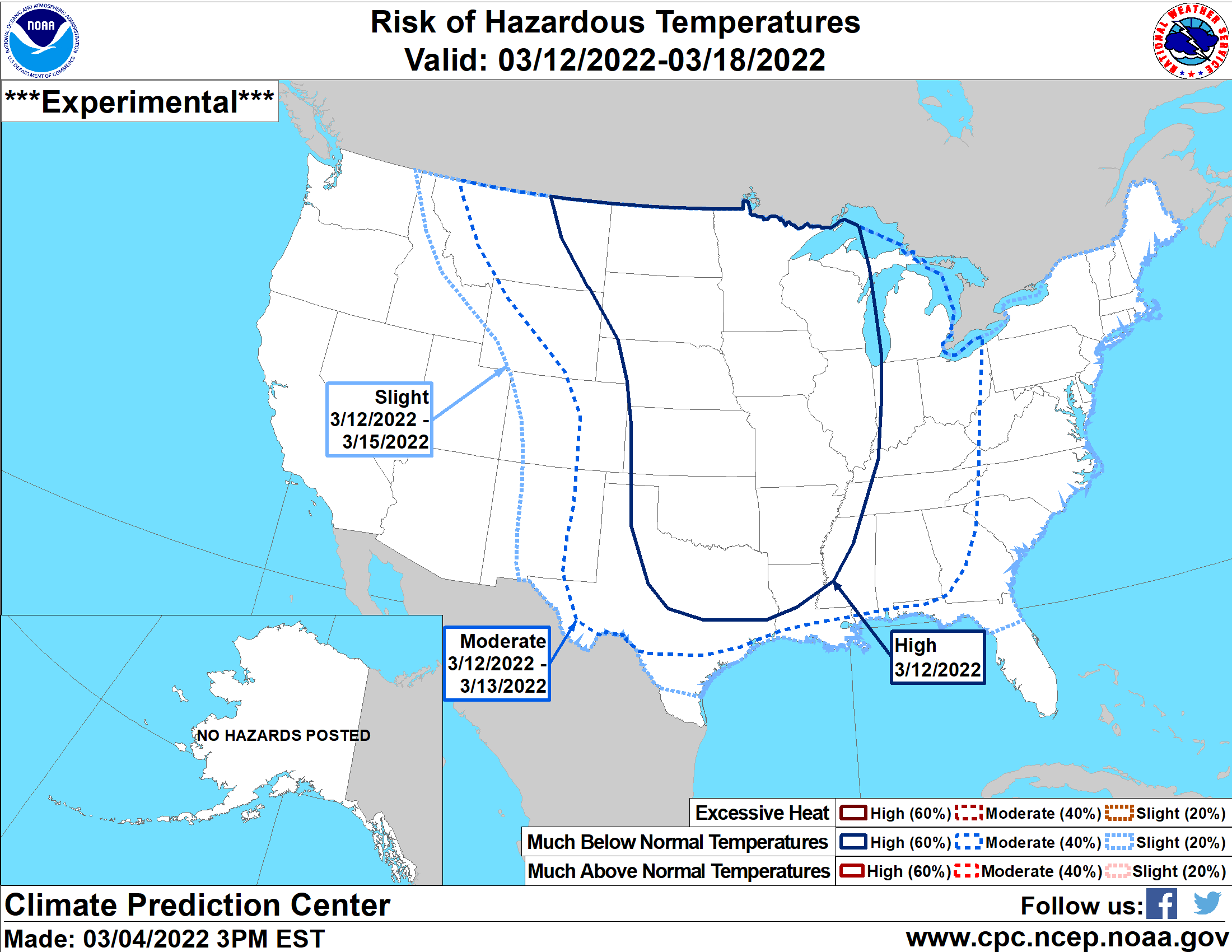 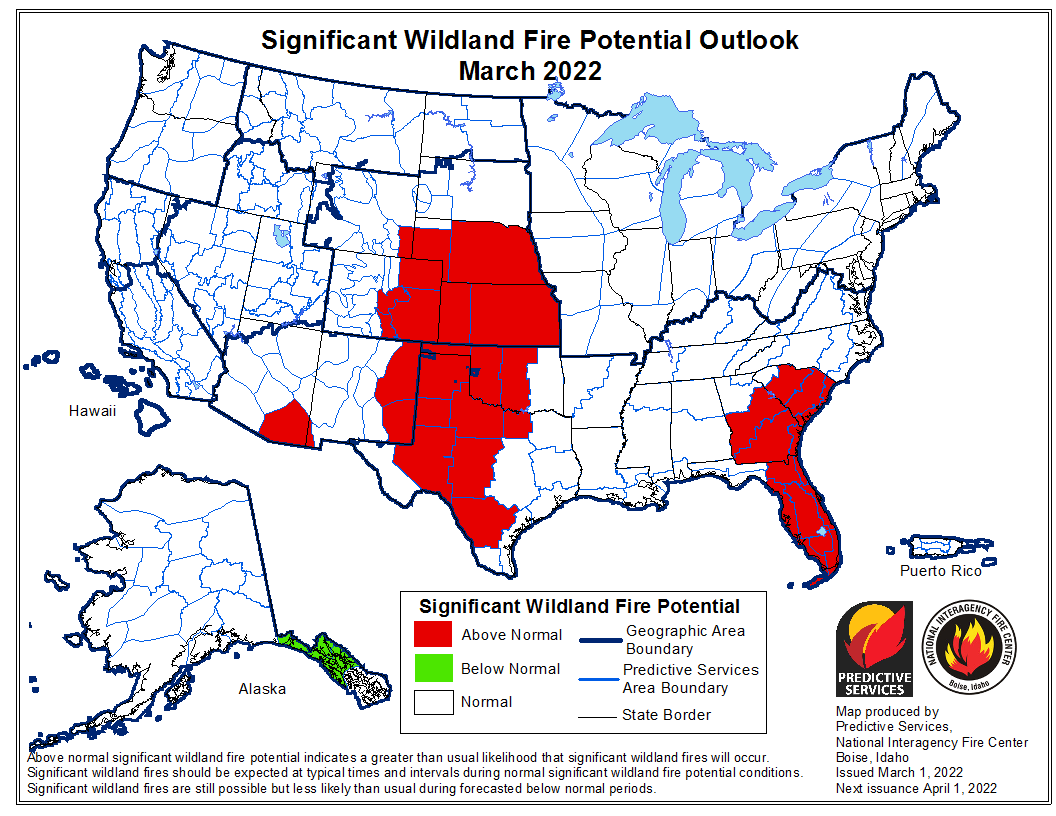 The primary weather story this February was the continued lack of precipitation leading to expansion of drought. February ranks in the top 5 driest on record for locations around Nebraska. The statewide monthly average of 0.11 inches is 2nd driest on record. Snow was dismal with the west receiving 2 – 9 inches, and only half inch or less elsewhere. Drought covered 38% of Nebraska at the start of February, but by early March the extent was 98%. Temperatures averaged on the cool side of normal, though mostly due to two cold snaps, one early and one late in the month. Fire risk has been elevated given the dry conditions and the outlook for March remains high. Stock ponds and streams have seen levels decline and spring flood risk is determined as low. This winter (December through February) saw less than half of normal precipitation for most of Nebraska, which is a 1.5 to 2.25 inch departure from normal. It ranks as 4th driest on record. Temperatures averaged one to three degrees warmer than normal for winter. Coming up toward the end of the month, March 27th through the 31st is Severe Weather Awareness Week in Nebraska.

February is generally light in terms of liquid equivalent precipitation for Nebraska, averaging only 0.67”. This year much of the state received half inch less than normal, roughly 25% of average. Many locations reported a top five driest February on record - Lincoln (0.03”, 3rd), Norfolk (0.13”, 7th), Grand Island (0.01”, 1st), Hastings (0.01, 2nd), North Platte (0.02”, 4th), Ainsworth (0.02”, 4th). A large swather of Nebraska received 0.02” or less. The highest precipitation amounts occurred for locations in the west, from a quarter to half inch or more, and a pocket in east central Nebraska receiving more than a quarter inch. The greatest 24-hour amount for Nebraska Mesonet stations occurred at Plattsmouth (0.19” on the 12th). The statewide average of 0.11 is about half an inch below normal and ranks as 2nd driest on record (1996 was driest at 0.03 inch. There is not a strong historical trend in precipitation during February for Nebraska, neither in the long-term (century) nor the short-term (last 30 years).

Due to the dry winter for much of the state, drought intensified extensively across Nebraska during February. At the start of the month, 38% of the state was in a drought category, according to the U.S. Drought Monitor. By the start of March, moderate to severe drought covered 98% of Nebraska, with only portions of a seven-county area remaining in the abnormally dry category. Severe drought (D2) encompasses 38% of the state. Precipitation departure from normal since November is highest in the east at more than three inches.

Soil moisture conditions are observed daily from Nebraska Mesonet sensors at various depths under grass cover. The impact of longer-term dryness can be seen in the southwest, west and northeast. Observations at 20 and 40 inches show that moisture comprises only 5 – 15% of the total volume. In areas where the dryness has evolved more recently (south central and portions of the east), moisture levels are 25 – 35%.

Seasonal snowfall totals at the end of February are in the top five driest for a handful of long-term observing locations: Grand Island (5.6”, 3rd), Lincoln (3.8”, 1st), Omaha (8.3”, 2nd), Norfolk (3.9”, 1st). The highest seasonal totals are found in the west, Bushnell coming in at 26 inches. While locations like Columbus have only reported two inches. According to the Accumulated Winter Season Severity Index (AWSSI), locations around Nebraska have experienced a mild season. This index is based on both precipitation and temperature patterns.

February averaged cooler than normal for most of Nebraska this year. The strongest departures of 3°F or greater below average occurred in the northcentral and west. The statewide average of 26.7°F was 1.7°F below normal. Nightime low temperatures were generally much cooler than normal (5°F), while day time highs trended above normal for the eastern two-thirds of the state and below normal for the west. Recent February’s are warmer than what they used to be during the first half of the 20th century. However, the last 30 years has seen a fairly significant cooling trend.

Soil temperatures are generally relatively warm. The daily average at the four-inch depth taken from Nebraska Mesonet observing stations is in the 30s or 40 degrees, and above freezing aside from the northern tier of the state. Temperatures at eight inches are generally in the mid 30s.

The spring flood outlook from NOAA National Weather Service is currently low for Nebraska due to lack of widespread river ice and the overall dry conditions. Snowpack in the mountains feeding the North and South Platte River systems with springtime snowmelt are near normal for this time of year. Though we are approaching the peak accumulation time and several months more of the snow season yet to be determined. Fire risk has been high frequently this winter due to the dryness and lack of snow cover.

The three-month (March – May) outlook from CPC leans toward warmer and mostly drier than normal conditions. The probabilities are highest for this pattern. The eastern quarter of Nebraska is in the equal chances of above, near and below normal precipitation. This period is generally the ramp up to our wet season of late spring and early summer. Given this climate outlook, drought is expected to persist through May.