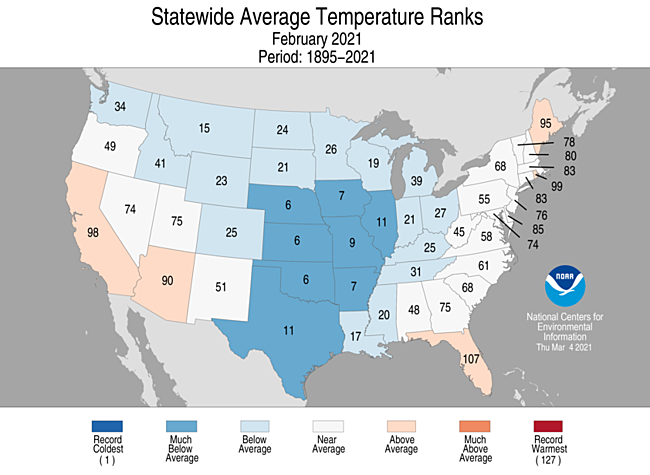 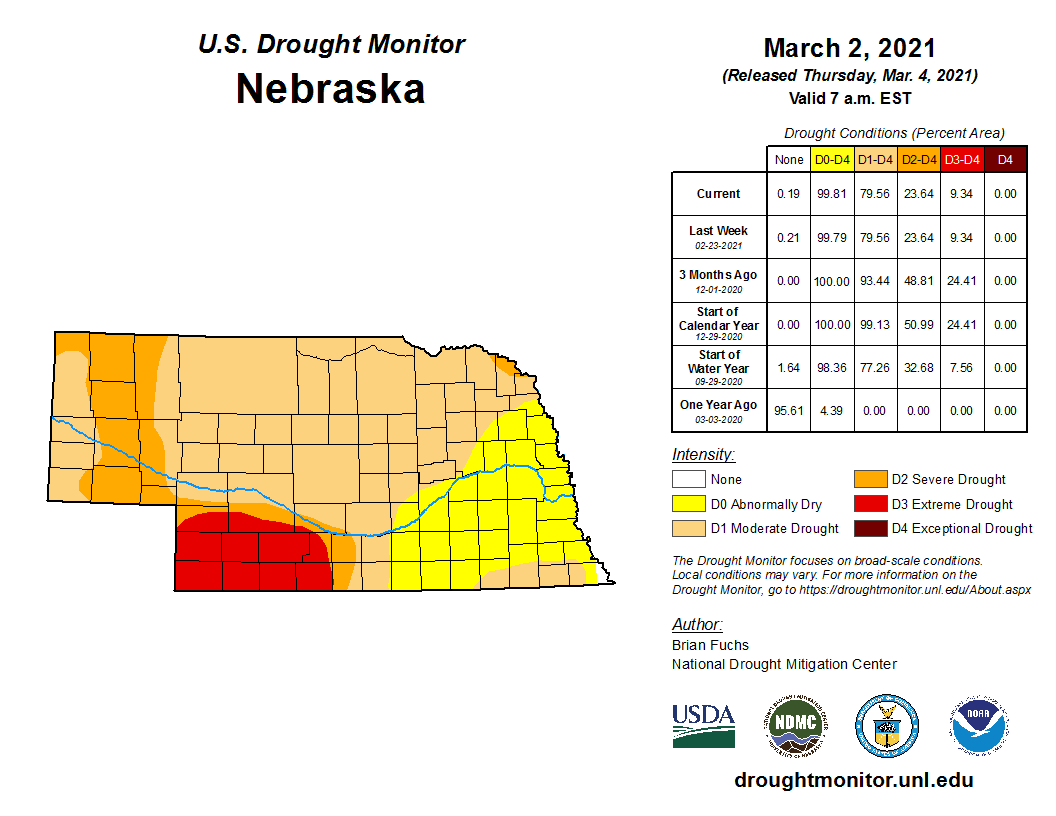 A large swath of the Great Plains was the recipient of a strong blast of Arctic air this February. Record lows were set around Nebraska and temperature departures of 40 degrees colder than normal occurred. It is not surprising that February was the 6th coldest on record. Snow was also plentiful for much of the state and several daily records were broken. According to the U.S. Drought Monitor, Nebraska experienced slight alleviation of conditions during February and started March with approximately 80% of the state in moderate or worse drought. Last year at this time, none of the state was facing drought issues.

Along with the low temperatures was significant snow in portions of Nebraska. North Platte (18.7 inches), Lincoln (16.6 inches) and Omaha (17.4 inches) all had a top ten snowiest February. Several daily snowfall records were set as well on the 6th, 7th and 13th. The highest was an 8.5 inch daily total reported at North Platte on the 6th. Precipitation totaled 0.58 inches for the statewide average, which is right about normal for February. Amounts were above normal in portions of the east, southcentral and some areas of the Panhandle.

Extreme cold was the storyline for February. Numerous daily records were broken and for several days the temperature departures were around 40 degrees below normal. The lowest temperature reported in the state was at Imperial of -39°F, while the lowest high temperature was -13°F at Elgin. Although thankfully the winds were light during this big high pressure event, wind chill temperatures were in the 40 below zero range. The all-time low temperature record at Hastings was tied (-30, 16th) and Lincoln had a new low temperature for February (-31°F, 16th). The statewide average temperature for the month of 16.6°F was 12.2°F colder than normal. Incidentally, February shows a cooling trend in Nebraska over the past 30 years.

Four-inch bare soil temperatures across areas that still had snow cover from the January 25th storm prior to the Arctic air arrival remained unfrozen, while frost depths reached 9 to 15 inches (location dependent) for the northern third Nebraska. The fluffy snow events during the Artic surges played a significant role in how far frost was able to penetrate soil profiles. With such dry conditions across western Nebraska all winter, the wheat crop remains in poor condition as of February 21st, according to the Nebraska Agricultural Statistics Service (NASS). NASS indicates 22% of the wheat crop is in poor or very poor condition. It is too early to determine the impact of the severe Arctic temperatures to the wheat crop, but it is likely that some losses occurred. Of course, the Arctic air made the start of calving season stressful, but ranchers had ample warning of this long-lived event and had time to take proactive measures to minimize the impacts of cold weather on newly born calves. Feed costs increased dramatically due to the frigid weather and was complicated by enough snow cover to make stalk grazing difficult. Significant ice accumulations formed on area watersheds, with ice thickness measured at 15 inches on the Platte river near Ashland just prior to the warmup at the very end of February. The slow pace of melting helped minimize ice jams, with only minor lowland flooding. On an even more positive note, the slow pace of snowmelt on unfrozen soils allowed for excellent infiltration with little observed runoff.

The Climate Prediction Center (CPC) released their updated March temperature and precipitation outlooks February 28th. Compared to the preliminary February outlook released 10 days prior, CPC has increased expanded their above normal temperature and below normal precipitation forecasts northward. In addition to greater areal coverage, CPC also increased their probability that the warm and dry outlook will occur.

CPC projects that areas east of the Rocky Mountains will see above normal temperatures, with the greatest odds assigned to the Gulf Coast and Great Lakes regions. For Nebraska, CPC indicates a tendency toward above normal temperatures, with the eastern half of the state assigned the highest probabilities that the event will occur. CPC indicates that below normal precipitation is favored from the southern Rockies northward through Wyoming. This area extends eastward through the western third of South Dakota, then southward to the Gulf of Mexico. Strong probabilities are assigned to the southern Rockies and eastward to cover the western half of Texas, western third of Oklahoma, and all of eastern Colorado. The highest odds of below normal moisture has been assigned to the western third of Nebraska, with only extreme eastern Nebraska depicted as having equal chances of above, below, or normal precipitation. Short term weather models agree with CPC’s forecast through the first third of the month, but also indicate that a series of storm systems will attempt to push into the western United States during the middle third of the month. It is this time frame that will likely determine whether CPC has correctly forecasted March weather trends for the United States. At least one of these systems looks to have the potential to drop significant moisture across the northern half of the High Plains region.