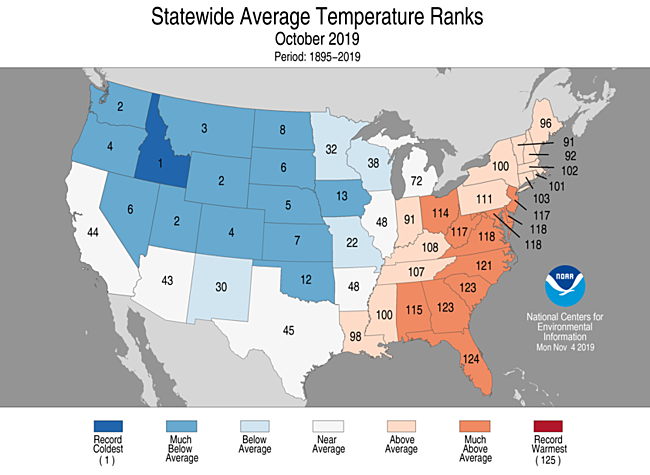 Near record cold swept across Nebraska this October. Temperatures averaged 6 degrees below normal in what was our fifth coldest on record since 1895. We experienced our first freeze and hard frost, which normally happens in October. The daily average soil temperature at the start of November remained above freezing. Precipitation averaged near normal statewide, however conditions were above- to much-above average in the east and below normal in the west. Portions of the Panhandle saw heavy snow early in the month. Abnormal dryness continues in the southwest, while Missouri River levels remain above flood stage from Nebraska City southward and around Niobrara. The upper Missouri Basin is near full system as we head into late fall, suggesting a risk for spring flooding looking into next year.

Season-ending freezes occurred during the month, and all observing stations reported temperatures colder than 28°F. Soil temperatures a few inches below the surface were still averaging above freezing by month’s end.

October does not show a significant long-term trend in temperature. With respect to year-to-date temperatures, we’re on the cool side for Nebraska.

Significant snowfall totals were reported in the west. Chadron (14.5 inches), Agate (12.3 inches) and Scottsbluff AP (8.7 inches) felt the brunt of a couple of storm systems. Snow also fell in the east, although totals were a few inches or less. Rainfall, however, was above average in eastern Nebraska. A swath in some east-central counties reported more than 4 inches for the month, twice the average amount. The highest amount was 6.87 inches near Elkhorn. Portions of western Nebraska only had a half inch or less, which is 50% of the average October total. Abnormal dryness has persisted for a few weeks for several counties in southwest Nebraska, according to the U.S. Drought Monitor.

The statewide average precipitation was 1.57 inches, just a few tenths below normal. A few daily records were reported. Omaha AP (2.12 inches), Lincoln AP (2.83 inches), and Norfolk (1.13 inches) all observed record rainfall on Oct. 1. Valentine AP had a daily record of 0.45 inches on Oct. 21.

The growing season came to an end in Nebraska with almost all of the Mesonet locations recording hard freeze conditions (low temperatures at or below 28°F) between Oct. 3 and 12, which is slightly on the early side compared to normal.  The extreme southeastern corner of the state failed to reach hard freeze conditions until Oct. 25.

Because of the early freeze, late-planted crops failed to make black layer, with north central and northeast Nebraska experiencing the most concentrated impact. Drying the corn to acceptable moisture levels will be the biggest issue going forward, due to the lack of on-farm drying capability across the state where farmers typically rely on natural air to dry down crops prior to harvesting.

Even with October coming in well below normal, Nebraska producers were fortunate to escape October with minimal harvest delays after two major weather systems traversed the country. The first brought significant snowfall to the northern Plains during the second weekend of the month, but Nebraskans were able to return to the fields within a week. The second system passed the fourth weekend of October bringing accumulating light snow totals south of I-80. Harvest delays were in the order of one to three days, with the southern Panhandle and southwest corner of the state receiving up to 6 inches locally.

Looking at the Nebraska Agricultural Statistics Service harvest progress, corn harvested for grain stood at 8% on Sept. 29 and increased to 60% by Nov. 3.  Soybeans went from 6% complete to 94% complete in the same period.  University Extension Educators noted on their bi-monthly call at the beginning of November that harvest activity would be virtually wrapped up in two weeks if favorable weather conditions persisted.

Some have reported disappointing irrigated corn yields across portions of central, southcentral, and southwest Nebraska.  Irrigated yield declines of 10 to 20 bushels per acre were reported, with a pocket of 15 to 25 bushels per acre reduction in the Imperial area.  Dryland yields in these same areas were above normal.  It is believed that heavy cloud cover during the second half of August and cool daytime summer high temperatures were a contributing factor.

The most significant dryland corn yield reductions were reported in the area north of West Point and south of Sioux City due to less than an inch of moisture from early July through mid-August.  Late planted and replant corn appeared to suffer the most significant yield reductions.  On a positive note, the drier-than-normal conditions during October helped dry out soil surface and reduced and/or eliminated standing water issues across low lying areas of fields, temporarily reducing flooding risks.  With high soil moisture values statewide, flooding concerns will likely remain with us through next spring.

Based on CPC’s October outlook, which was significantly warmer than observations across the northern half of the U.S. and the jet stream pattern at the beginning of November, CPC may be underplaying the depth of cold air that will affect the Dakotas, eastern Montana, Nebraska, and Kansas.  The precipitation outlook issued by CPC for November may be too dry across Missouri, as recent storm activity has brought very active and wet conditions to the state during the last 10 days of October.  It would not be surprising to see CPC’s drier-than-normal precipitation outlook for November shift northwest so that the drier-than-normal conditions lie across Nebraska, again due to the overall jet stream pattern favoring systems passing south and north of the state during October.

Nebraska’s statewide weather network operated by the Nebraska Mesonet at the University of Nebraska-Lincoln cataloged the following extremes this November: 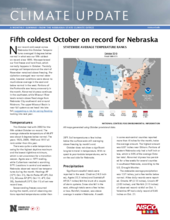