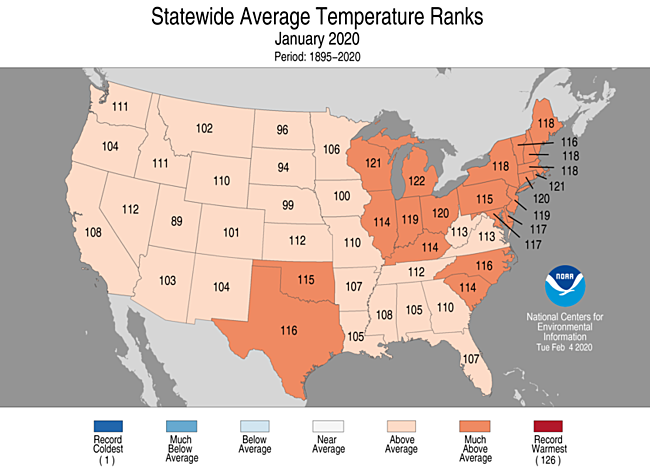 January was relatively quiet across Nebraska with a slightly above-normal average monthly temperature and near-normal monthly total precipitation. Snowfall was heaviest in the east with up to 10 inches observed at a few locations. Soil moisture and river flows remain high given the general persistence of wetness. We are in an above-normal risk for flooding this spring. Floods the magnitude of 2019 is very unlikely again this year, however, timing and intensity of late winter precipitation will be a critical factor. It is advised to keep up-to-date on the latest conditions.

Conditions were wettest for the eastern third of the state with 1 to 2 inches of precipitation (about 50% above normal). The west received only 50% to 75% of normal with less than half an inch of precipitation. Snowfall totals were in the 6- to 8-inch range for much of eastern Nebraska. The highest amounts of 10 inches were recorded for a handful of locations in the southeast and northeast. One daily snowfall total was reported — a 4.3-inch amount on Jan. 23 at Omaha Eppley Airfield. One daily precipitation total occurred with Hastings reporting 0.32 inches on Jan. 21. The average monthly statewide total of 0.59 inches, was about a tenth above normal for January.

According to the U.S. drought monitor, abnormal dryness (D0) expanded slightly and now covers a portion of seven counties in southwest Nebraska.

Nebraska saw a range of temperatures this month, from 60°F in southern portions of the state to -14°F in the northeast. On average, highs were in the mid-40s in the southwest, which is warmer than normal, and in the 20s in the northeast, which is cooler than normal. Hastings tied a record high minimum temperature of 33°F on Jan. 22. The statewide monthly average temperature of 27.2°F was a few degrees warmer than normal. Warmth was widespread across the U.S. this month, in fact, as January ranked as fifth warmest for the contiguous U.S.

Soil temperatures ended the month on the warm side, with the only significant frost depth in the Panhandle. Alliance and Broadwater had frozen ground to nearly 10 inches below surface; eastward toward Champion, it was frozen only to the 4-inch mark and was less than 2 inches elsewhere, if at all.  The soil moisture below the frost depths show relatively moist conditions in southeast Nebraska and very moist conditions in northeastern Nebraska. The Panhandle is the driest, with significant dryness throughout the entire soil column in the North Platte river valley.

The Climate Prediction Center outlook for February and March show a nearly 50-50 chance that the temperatures will be below or above normal, and the same is true for precipitation, other than a portion of the northern Panhandle where slightly above-normal precipitation is expected.  Looking further ahead, March and April appear to be a toss-up for temperatures but have a stronger indication of a wetter-than-normal spring. 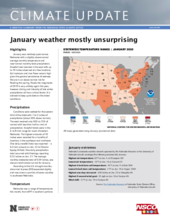