July is the same story for a different month 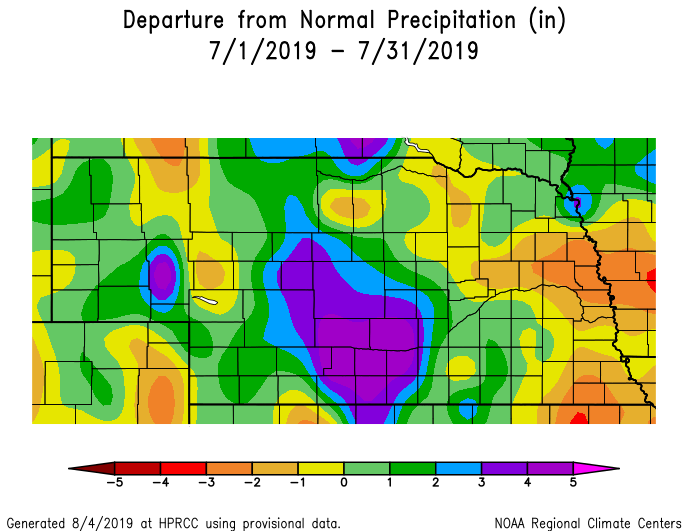 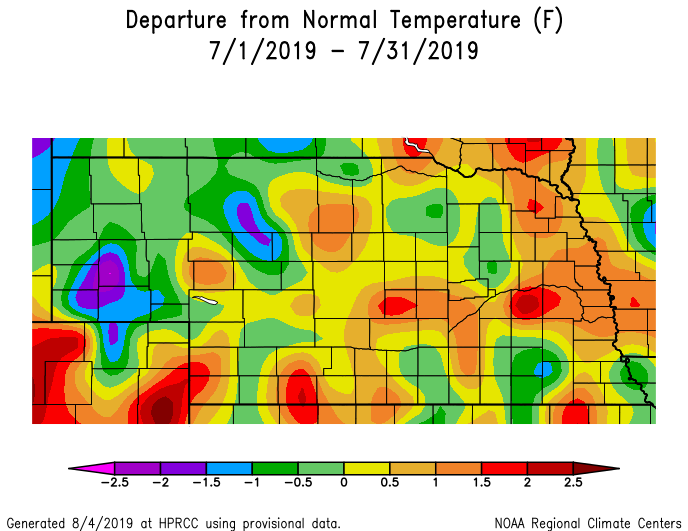 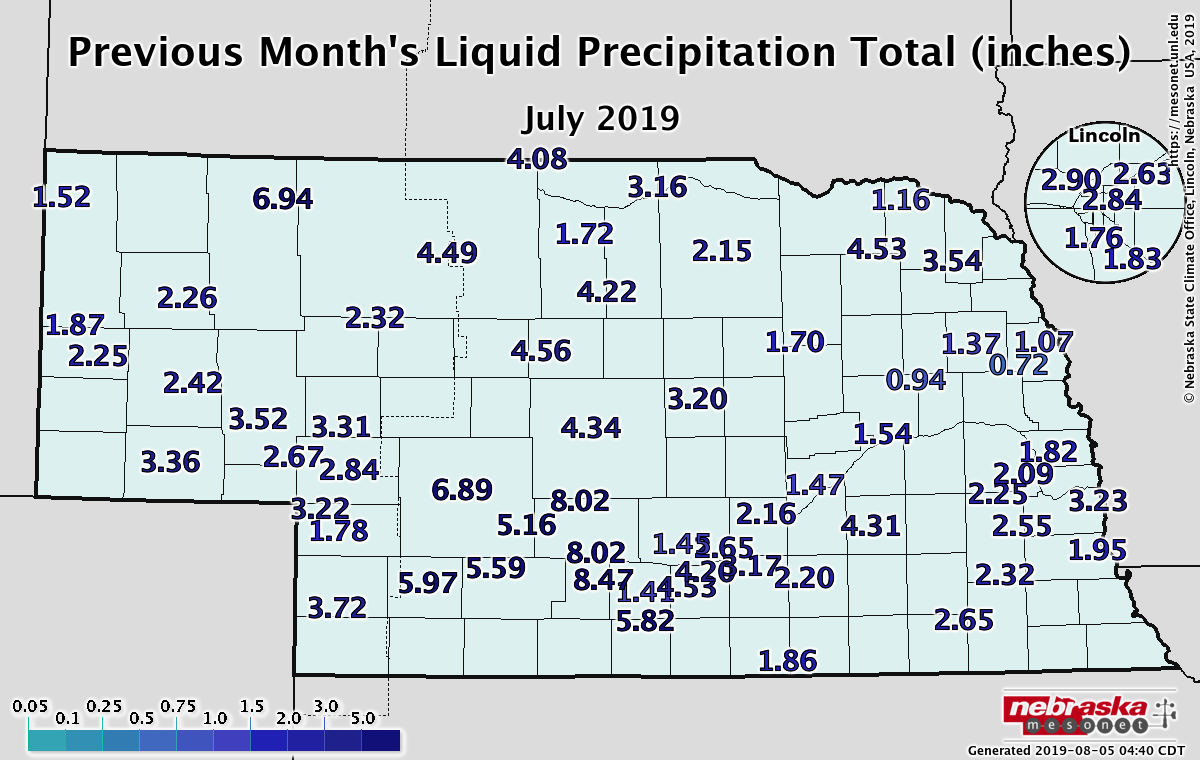 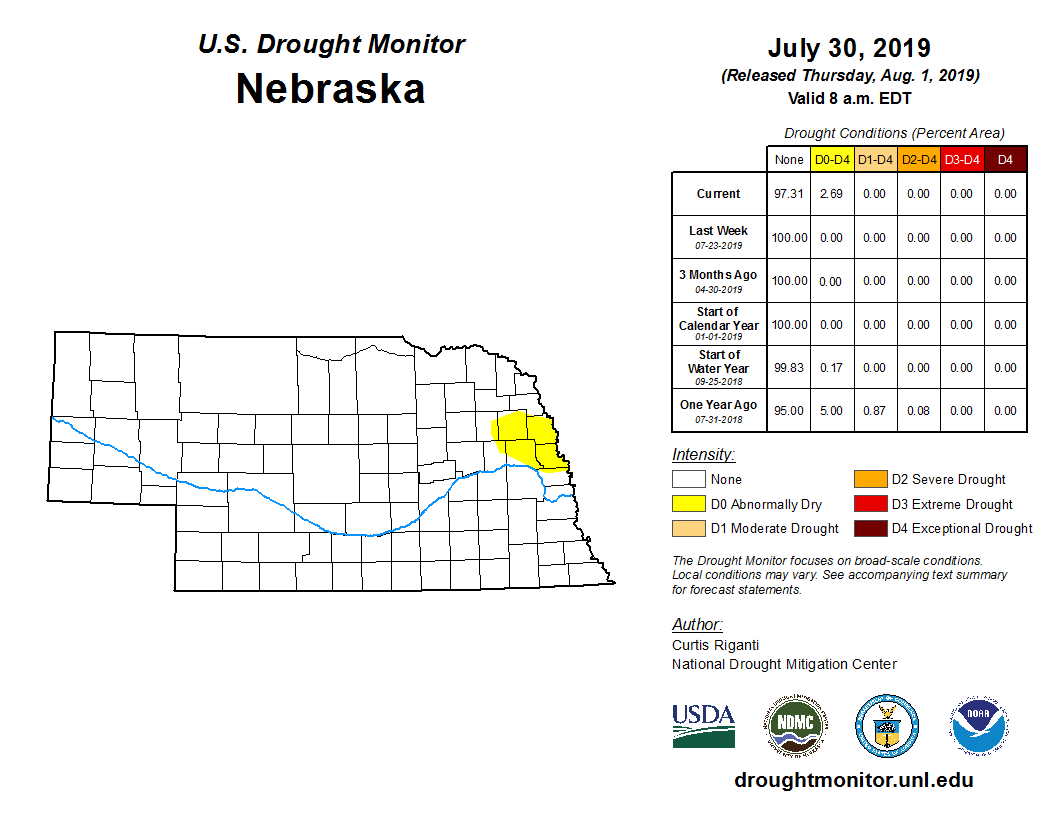 In some ways, July provided the same story for a different month. Extreme rainfall fell over a large swath of southcentral Nebraska in early July, this time part of a summer convective storm. Event totals for July 9 were greater than 4 inches for approximately a 10-county area. The highest total was 8.88 inches near the town of Loomis. Flooding was widespread for communities along the central Platte River. Water evacuations were necessary; water was 4-foot-high water in places; cars were stranded; and highways, offices and businesses closed.

On the flip-side, some crops showed signs of water stress, particularly in the east as hot days and short-term dryness affected cornfields. An irrigation canal servicing a small portion of the panhandle had a tunnel collapse and was subsequently shut off July 17. Repairs were not expected before mid-August. Some crops there were nearing the critical growth stages of pollination and reproduction, when the plant’s water use is at its maximum. The corn was in desperate need of extra moisture from the North Platte River or from rain events to avoid significant crop losses.

Across Nebraska, July precipitation totals were a mix of above and below normal depending on location. Due to the extreme rain early in the month, totals for southcentral Nebraska were more than 6 inches. Much of central Nebraska received at least 4 inches, and there were localized heavy precipitation of more than 5 inches for portions of the west. Conditions were quite dry in the east where only 1-2 inches fell in some areas. This is about 3 inches below normal for July.

On average, precipitation totaled 4.05 inches, which was 1 inch above normal.

Four tornadoes were confirmed in the state during July and occurred near the towns of Roseland on July 8, Sidney on July 12, Harrison on July 17, and Spencer on July 28. There were 64 hail reports scattered throughout the month, occurring on all but three days. July 4 was the largest outbreak with 16 hail reports that day, along with 10 high wind reports. Fifty-seven more occurred during the rest of July.

The warmest temperatures of the year came in the middle and second half of July. Everywhere around the state reached at least 90°F and many locations topped the century mark. The highest observed temperature was 104°F at Culbertson.

For late-planted crops, above-normal temperatures during the middle of the month helped reduce Growing Degree Day unit deficits accumulated with planting delays, but not enough for the crops to catch up to normal. Early-planted corn experienced minimal stress during the worst of the heat in the third week of July, according to Crop Extension Specialists with the University of Nebraska-Lincoln, because ample moisture deep in the soil profile was still available due to the very wet spring.

Late-emerged corn in some portions of the state were already experiencing stress in May due to poor root structure. How much of an impact those stress conditions have on final yields is unknown at this time, since just shy of 30% of the corn crop had not silked by the end of July.

If rainfall continues to fall short during the first half of August, farmers and Extension educators were concerned the lack of moisture would reduce yields. Cool conditions at the end of July and into early August should help during the grain fill period, but also elevates the risk that an early or normal freeze will hurt late planted corn.

For the first time since May, abnormal dryness has appeared in Nebraska, according to the U.S. Drought Monitor. This time the impacted area is encompasses Burt, Cuming, Dodge and Washington counties with “abnormally dry” conditions introduced in the Aug. 1 release of the weekly product. Lack of recent and timely rainfall in addition to heat stress in later planted corn is reported to be causing significant leaf rolling in tasseling corn.

If the precipitation forecasts verify, several inches of rain could be on the horizon around mid-month for the southeast corner of the state. Climate Prediction Center monthly outlooks again indicate a continuation of the general trend toward cooler- and wetter-than-normal conditions for Nebraska this August. For the three-month period of August through October, the pattern of wetter-than-normal conditions as the favored outcome continues. Temperatures have an equal probability of above, near, or below normal. 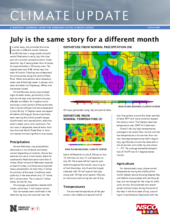