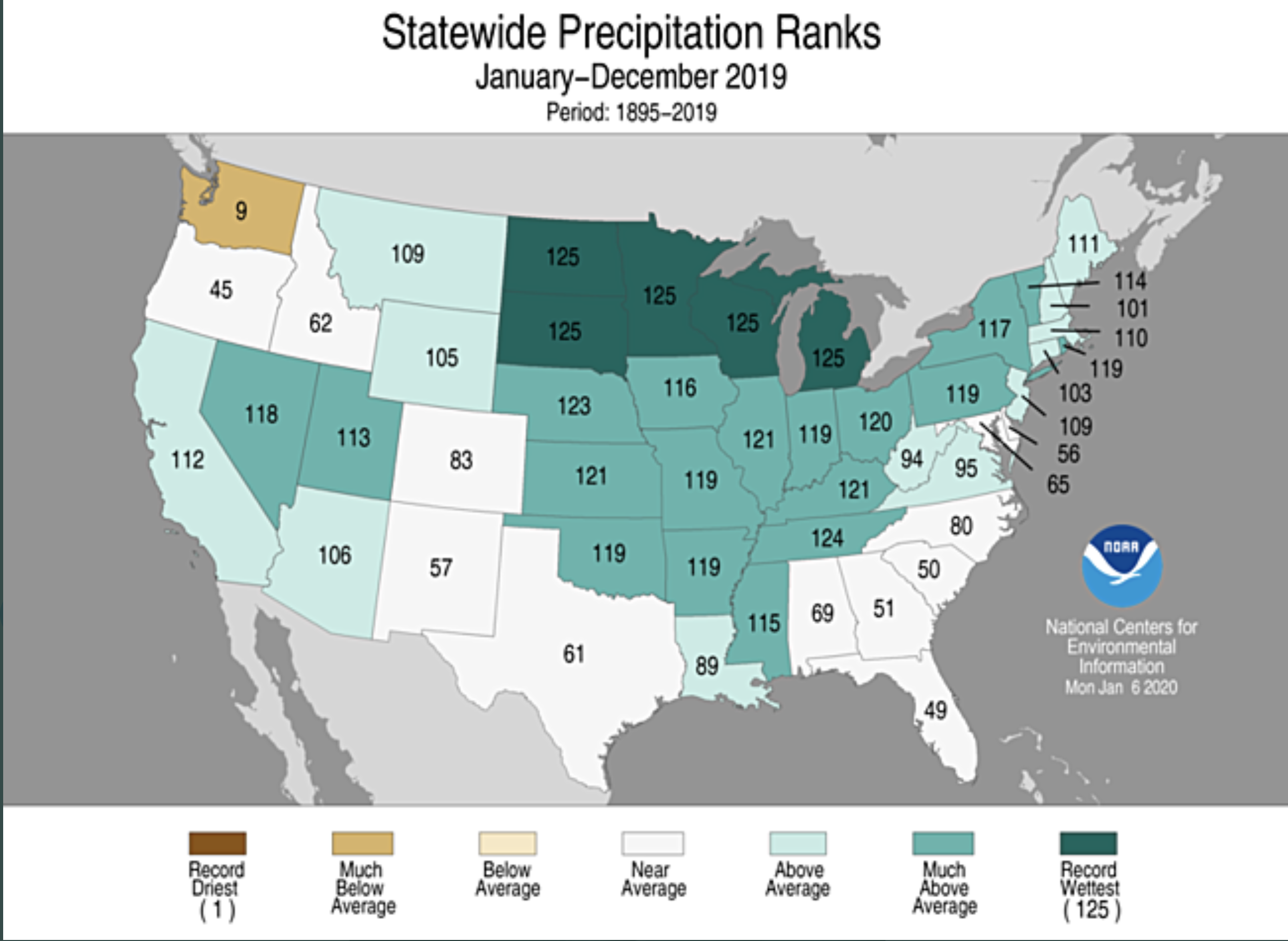 The big weather story for December came in a significant winter storm late in the month. The system dropped heavy rain — 1 to 2 inches — for portions of the eastern half of the state resulting in some new daily precipitation totals. Heavy snows were observed around the state with 10 inches around Kearney and just over a foot in east central Nebraska. More than 90 miles of I-80 were closed more than 24 hours due to wind, ice and snow, and roads in the Panhandle were deemed impassable.

Conditions were wet overall for Nebraska, which caps off a wet year for the state. Annual precipitation in Nebraska averaged 31.33 inches, more than 7 inches above normal and third wettest behind 1915 and 1993. Much of the upper Midwest (North Dakota, South Dakota, Minnesota, Wisconsin and Michigan) experienced their wettest year on record. The U.S. as a whole was second wettest.

Given the general persistence of wetness in the upper Missouri Basin and climate outlook for a continued wet pattern, an elevated spring flood potential should already be a consideration.

Precipitation for December totaled more than 2 inches for some portions of Nebraska — mostly occurring as rain rather than snow. Thanks to the late-month storm, daily rainfall records were set on Dec. 28 for Lincoln (2.12”), Omaha (1.76”), Grand Island (0.98”), Hastings (0.94”), and Norfolk (0.62”) airport observing locations. The highest daily rainfall amount was reported near Rising City, with 2.58 inches on Dec. 28.

Snow was plentiful for portions of the state as well. Areas of northern Nebraska saw 1 to 2 feet of snow, such as near Chadron and locations in the east. Southcentral Nebraska received about a foot during the month. Elsewhere around the state, snowfall totals were several inches.

According to the U.S. drought monitor, a small pocket of abnormal dryness exists in southwest Nebraska in Hitchcock, Red Willow and Furnas counties.

Temperatures overall were relatively mild and averaged a few degrees warmer than normal. The departures were stronger at night (5.3 above average) than during the day (3.5 above average). Statewide, the average temperature was 30.2°F. The lowest temperatures statewide were below zero for a few pockets in the northwest and northeast (-7°F south of Harrison). However, we almost reached as warm as 70°F during the month, with a 69°F observation in the southwest. No significant frost depth exists across the state at this time. Daily average soil temperatures at the 4- inch depth are above 30 degrees.

In the short-term, the climate outlook for mid-January splits the U.S. into a pattern of cooler than normal in the west and warmer than normal in the east.    Nebraska lies in the increased chances for cooler weather. Much of the country is in a wetter-than-normal pattern, including Nebraska. For the month of January, the outlook from the Climate Prediction Center released on Dec. 31 puts Nebraska essentially in the equal chances category, with not a lot of guidance. There is a cool pocket to our west and wet to our northwest, just grazing the northern Nebraska panhandle.

Seasonally, the trend for January to March remains similar to the winter outlook. A pocket of colder-than-normal temperatures in the upper Midwest and wetter than normal for much of the northern half of the U.S. Should the wet trend continue, the potential for spring flooding should be carefully watched. Conditions as we end winter, such as storm frequency, frost depth and river ice formation, will be important for flood severity and timing.

Nebraska’s statewide weather network operated by the Nebraska Mesonet at the University of Nebraska-Lincoln cataloged the following extremes this December: 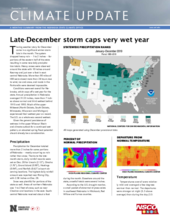