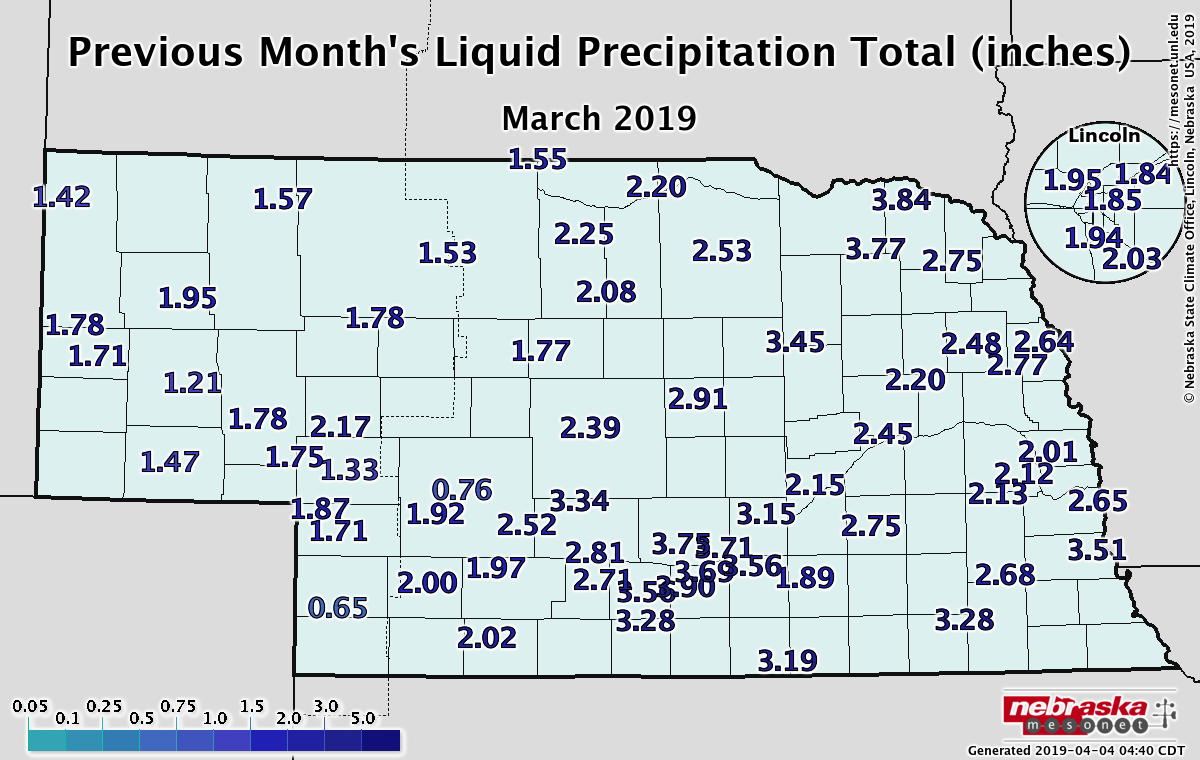 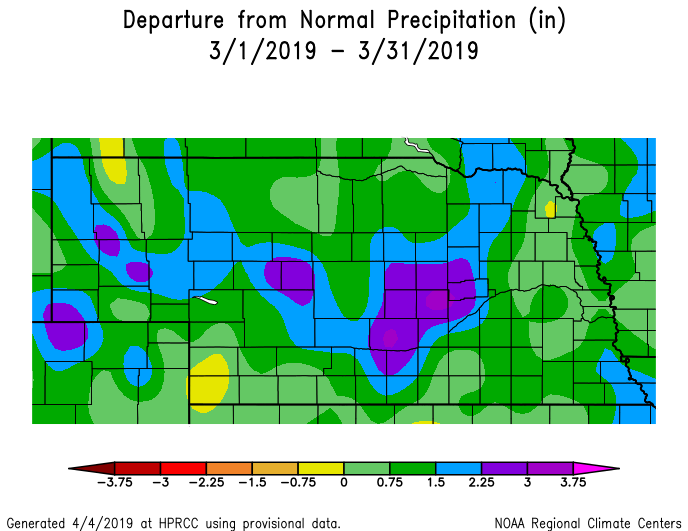 Historic and large-scale flooding ravaged Nebraska this March. It wasn’t only a result of the “bomb” cyclone causing blizzard conditions in the west and heavy rain in the east. It was the combination and timing of events leading up to the massive storm that set the stage for damaging floods.

Before the storm, the weather was quite cold, coming in as the ninth lowest average February temperature on record ― more than 9 degrees lower than normal. Precipitation, particularly for eastern Nebraska, was quite high with two to four times the normal amount going back to December. Snow had been plentiful, and the landscape was blanketed with an appreciable snowpack. Rivers were frozen and beneath the snow cover, the soils were frozen and saturated. Any snowmelt or rain would have nowhere to go but downstream.

On March 13 to 14, a massive and deep low-pressure system slowly tracked across the U.S., and western Nebraska experienced blizzard conditions with sustained high winds and blowing snow, while on the warm side of the storm, areas received 2 to 4 inches of liquid precipitation.

The resulting extensive flooding significantly affected many towns, farms and roads in the east, and a state of emergency was declared for portions of the state. Spencer Dam on the Niobrara River in the northeast collapsed when strained with excess ice and water. The preliminary damages have been estimated in the $1 billion to $2 billion range, as of April 9.

Precipitation, including water equivalence for snow as well as rain, was above the 30-year average across the state. The highest departures were found in central Nebraska with monthly totals of more than 4 inches, which is more than twice the normal amount for March.

Other areas of the state received 2 to 3 inches of precipitation. The monthly totals for Chadron (1.10 in, tenth wettest), Scottsbluff (2.61 in, fourth wettest), North Platte (2.68 in, seventh wettest), and Grand Island (3.67 in, fifth wettest) all ranked in the top 10 highest totals.

As the storm slowly moved across Nebraska, 1.73 inches of rain was observed March 13 at the Grand Island airport; it was the second highest daily rainfall total ever reported for March. The Nebraska Mesonet station west of Elgin reported 2.95 inches, which was the monthly high for the network.

The southwest corner of the state was the “relative” dry spot with 1 to 2 inches for the month. These totals are near to slightly below normal for March. The statewide average precipitation was 2.65 inches, which is 1.15 inches above normal and ranks as the sixth wettest March on record.

Thanks in part to the mid-month storm, snowfall was plentiful in the west. At least 1 foot of snow fell in portions of the Sandhills, south to North Platte and points west. The Scottsbluff airport reported 30.8 inches, more than four times the normal amount. It set a new record for the month of March. Other impressive snowfall totals around the area include Chadron (29.5 in), Gordon (23.5 in), Oshkosh (23 in), Bushnell (21.3 in), and North Platte AP (16 in). Snowfall across the southern and eastern portions of the state were anywhere from 1 to 10 inches.

Season-to-date snowfall for Lincoln reached 55.5 inches during March. This breaks the previous record of 54.3 inches recorded during the winter of 1959-60.

Aside from some warmth with 70-plus degree days during the latter part of March, the month was cooler than normal, continuing the trend from February. Average temperatures were in the mid-30s in the south and high-20s in the northwest.
The strongest departures were found in northcentral and western Nebraska where March was more than 6 degrees cooler than average. Temperatures in the northeast to southwest and points eastward were generally 2 to 6 degrees below normal. The monthly statewide average temperature was 32.7 degrees, which is 5.4 degrees below normal and ranks as 31st coldest out of 125 years of record.

The month started out quite cold with Arctic air intrusions resulting in temperatures running about 15 degrees below average. Several locations around the state reported record cold high temperatures in the single digits during the first week of March. The lowest observed temperature was 25 below zero at the North Platte airport and a handful of other sites reported lows of at least 20 below (Alliance, Chadron, Lodgepole, Oshkosh). The Nebraska Mesonet station south of Long Pine in the Sandhills reported a minimum wind chill temperature of -36°F.

Temperatures did finally warm by month’s end and even a few 80-degree highs were reported in Beaver City and McCook.
Ground conditions for much of the state began the month quite cold after well-below average temperatures for the preceding six weeks. The exception was for areas in the east that maintained a decent blanket of snow cover that helped insulate the ground from the cold weather.

By the end of the month and after all the snow melted, afternoon bare soil temperatures were approaching mid-60s in southern Nebraska. The weekly average temperature at the start of April was generally in the mid-40s in the south and 35 to 40 in the north. Moisture levels in the soil are at or near saturation in at least the foot of the soil profile. Some areas are drier further down and conditions are generally drier in the western part of the state.

As the massive spring storm affected the state, the winds were quite high and sustained at more than 25 miles per hour for nearly two days. Temperatures were not very low on the cold side of the storm with highs in the 20s and kept wind chill temperatures from dipping very low. The highest wind gust at Mesonet locations was found near Dunning at 63 mph.

A range of current and potential future impacts to agriculture can be expected, given the conditions during March. Cattle losses were experienced from the blizzard and the flooding. Country road damages create logistical issues getting to the fields. Planting delays due to saturated soil conditions are likely in the eastern half of the state. At this time, it is uncertain the extensiveness of damage to fields preventing plant.

The abnormally dry conditions that present in the southern Panhandle during February, according to the U.S. Drought Monitor, were eliminated by the end of March. When looking at precipitation departures across the state going back to October, the Panhandle is the only area showing precipitation deficits with a few pockets that have received 70% of normal precipitation. Needless to say, too much water has been the issue of concern for much of the state.

The outlook of a high probability of below-normal temperature for Nebraska during March certainly did pan out. The April trend is reversed, although not as high a probability. The outlooks predict a slight tilt in the odds for a warmer- and wetter-than-normal April, which is uniform for all of Nebraska, as well as much of the country. Although the outlook is only slight, an enhanced chance for more moisture would come at a time when soils are already quite full. Specific impacts will depend on timing and duration of the precipitation events. If the warmer temperature outlook verifies and evaporation is enhanced, this could help to mitigate some potentially negative impacts of a wetter-than-normal April.

Looking further out into the April-to-June timeframe, the middle of the country lies in an area of increased chance for below-normal temperatures. Probabilities are at 40% for much of Nebraska. In contrast, the outlook for the eastern and western U.S. is an increased chance for above-normal conditions. For precipitation, the probability of above-normal precipitation is favored. 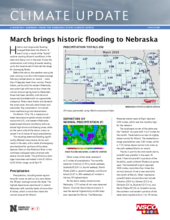