After a cold and snowy April, Nebraska seemingly skipped spring and went right to summer in May. Average temperatures were 2 degrees to 8 degrees above average across the state, with five stations ranking within the top five warmest for the period of record. At the same time, the state saw about half the normal amount of rainfall. Learn more about how this month’s climate effected Nebraskans in the May edition of the Climate Update from the Nebraska State Climate Office. 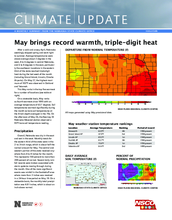