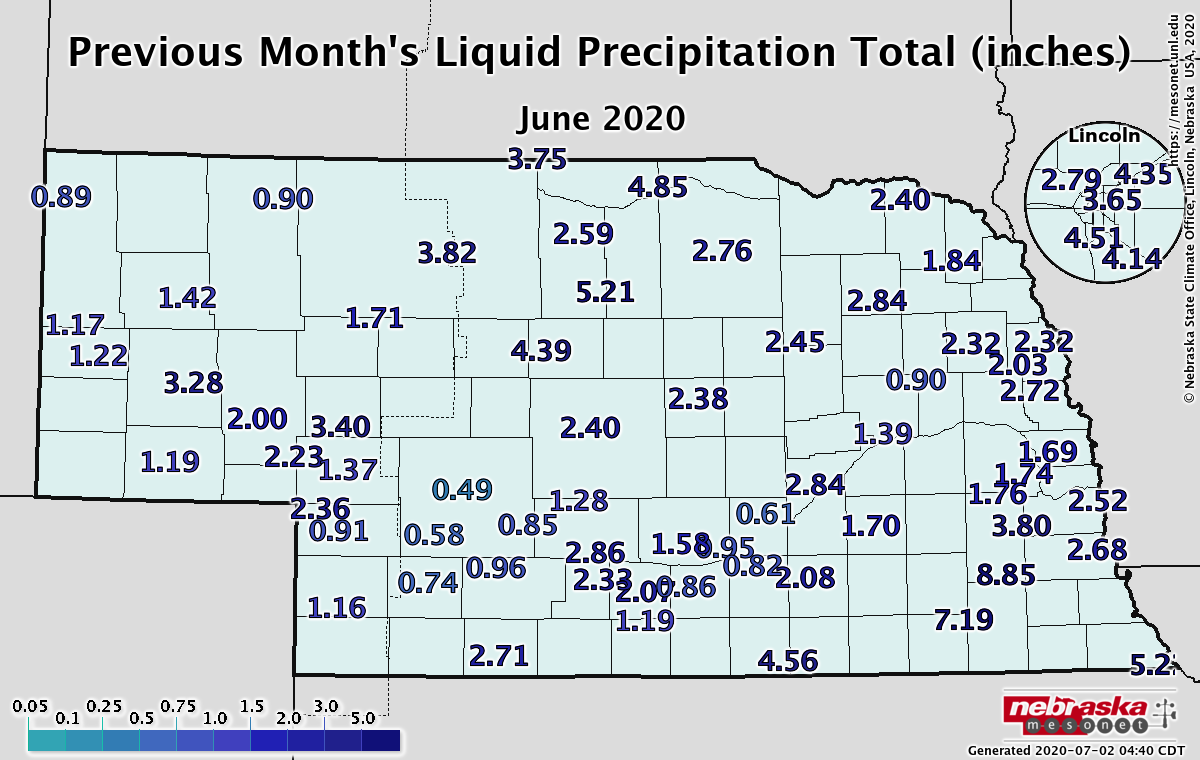 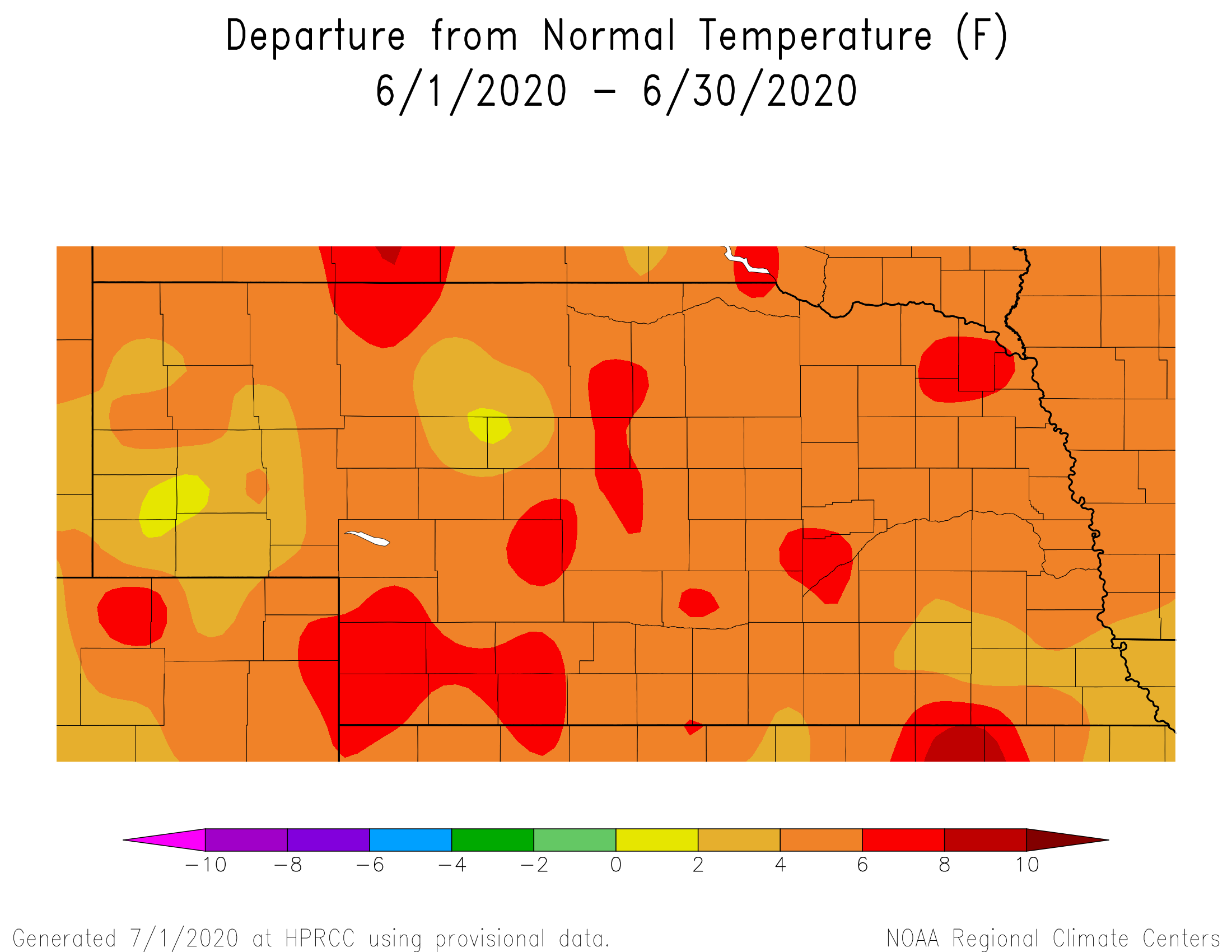 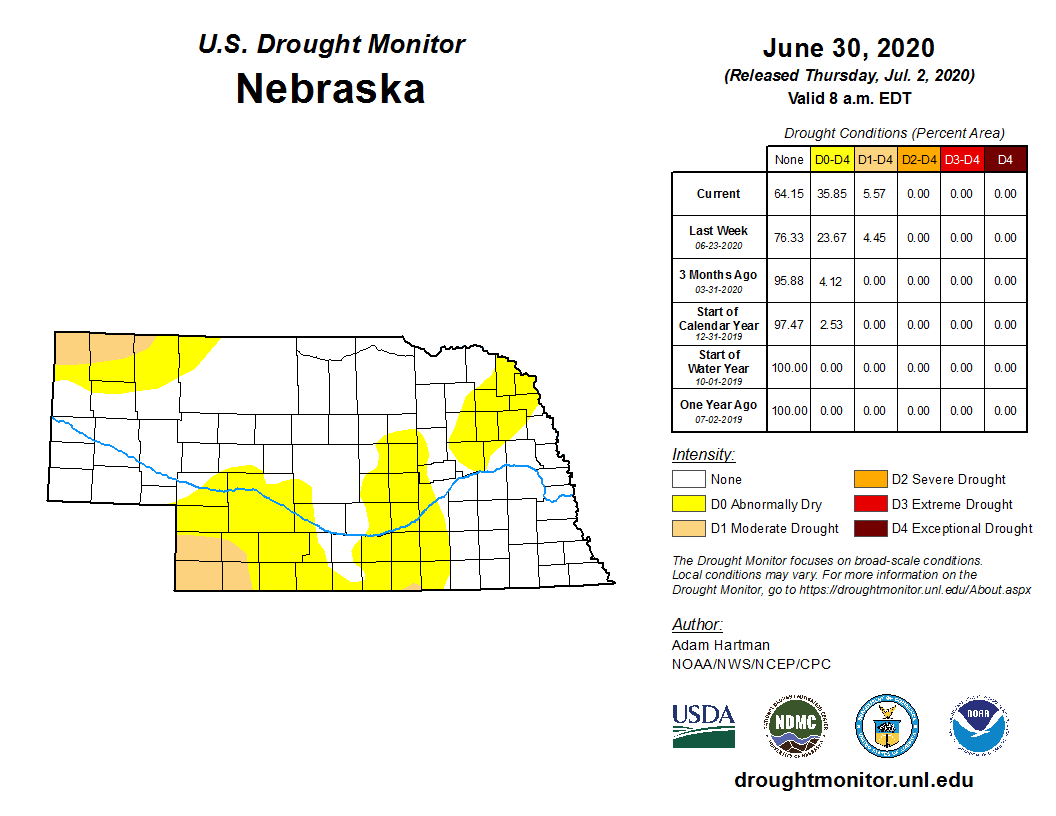 US drought monitor depiction for the end of JUne

US drought monitor depiction for the end of JUne

Heat and dryness were the general rule last month in Nebraska’s 9th warmest June. Several dozen temperature records were broken around the state, primarily for nighttime warmth. Most observing locations had two weeks’ worth of 90°F days or warmer. There were a two areas of localized heavy rainfall with flooding impacts, however precipitation for most of the state was a few inches shy of the June average. Given the warm, dry weather, abnormal dryness and moderate drought increased further into Nebraska. Year-to-date, the state is experiencing warmer and drier than normal conditions. Severe weather was reported on 17 days during June with 169 high wind reports, 138 hail reports and 6 tornados.

It was a warm one this June as the average monthly temperature for Nebraska was 4.9°F above average at 73.4°F. This ranks as 9th warmest on record along with another warm June - 2012. It was particularly warm, and windy, during the first half of the month. High humidity also set in with dewpoint temperatures of 65°F and higher a common occurrence. Not surprisingly, quite a few record low minimum temperatures were reported, mostly in the eastern half of the state (Norfolk, Omaha, Lincoln, Grand Island, Hastings). The highest record of 77°F occurred on the 8th at Omaha Eppley Airfield. In the west, daily high temperatures set records at North Platte (2nd, 4th) and Scottsbluff (1st, 2nd, 16th) with readings from 96°F to 101°F. The highest temperature statewide was 103°F at several locations in the southwest and the low was 32°F (Bushnell).

Much of Nebraska was in the rainfall deficit category for June, which typically corresponds with above normal temperatures. Rainfall amounts were less than two inches for much of the west, southwest and southcentral, east central and northeast. Departures from normal are in the two to four inch range. Localized heavy rainfall was a product of intense storms, resulting in more than five inches in a 24-hour period in the central Sandhills and the Beatrice area. Monthly rainfall was highest in the southeast and portions of the northeast with three to four inches, and localized totals greater than seven inches. One record daily precipitation occurred at Valentine on the 9th of 1.53 inches. The statewide average is 1.39 inches below normal at 2.36 inches (18th driest on record).

The impacts of above normal temperatures and widespread below normal precipitation across most of the state during the month of June has resulted in an expansion of abnormal dry and moderate drought conditions, particularly for southwestern Nebraska. A comparison of the U.S. Drought Monitor depiction entering and exiting June shows an expansion of moderate drought conditions across the southwestern and northwestern corners of the state. Abnormally dry conditions extend across portions of southwest, south central, west central, and northeast Nebraska.

Crop condition reports issued by the Nebraska Agricultural Statistics Service indicate that corn, soybean, and sorghum ratings remained above 70% good to excellent on the final June release issued the 29th. Crop water demands were just beginning to reach the 0.25 inch per day threshold by month’s end. Pasture conditions are beginning to reflect the dryness observed during June with the good to excellent category at 66%, but only 4% was rated excellent.

Extension Specialists indicate they expect a rapid decline in pasture and crop conditions during the first two weeks of July if the temperature and precipitation forecasts verify across western Nebraska. With dryness expanding into eastern Nebraska, rainfall will be critical in regard to crop health, especially with corn expected to enter its pollination period during the first half of July.

Warm season crops are reaching their peak water use and will require at least 1.50 inches of moisture per week just to keep up with crop water demands. Precipitation shortfalls will need to be made up from stored soil moisture, which is beginning to become short due to dryness, heat, and wind during June.

It was not all bad news across the state. Heavy moisture was received across southeastern Nebraska mid-month with an area of 4-8 inches of rain received across portions of Gage, Jefferson, Saline, Lancaster, and Otoe counties. Soil profiles were likely recharged to full water holding capacity, but extensive lowland flooding and hail likely led to concentrated crop damage.

On July 18th, the Climate Prediction Center (CPC) issued their preliminary outlooks for the month of July. The temperature outlook called for above normal conditions nationwide, with the greatest probability of occurrence assigned to the western third of the U. S. In addition, the precipitation forecast called for below normal moisture over the northern half of the Rockies extending eastward to cover the northwestern half of the Nebraska Panhandle, along with western sections of the Dakotas.

The updated Climate Prediction Center temperature and precipitation outlooks for July have changed significantly from their preliminary outlook issued June 18th. CPC has shifted the core area of above normal temperatures eastward, with the highest probabilities assigned to an area extending from southwestern Texas northeast through the Great Lakes and northeastern U. S. The southeastern half of Nebraska is included in this region, with lower probabilities of above normal temperatures assigned to the northwestern half of the state.

Nebraska’s statewide weather network operated by the Nebraska Mesonet of the Nebraska State Climate Office cataloged the following extremes this May: 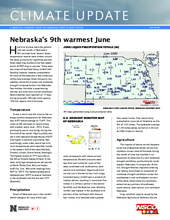