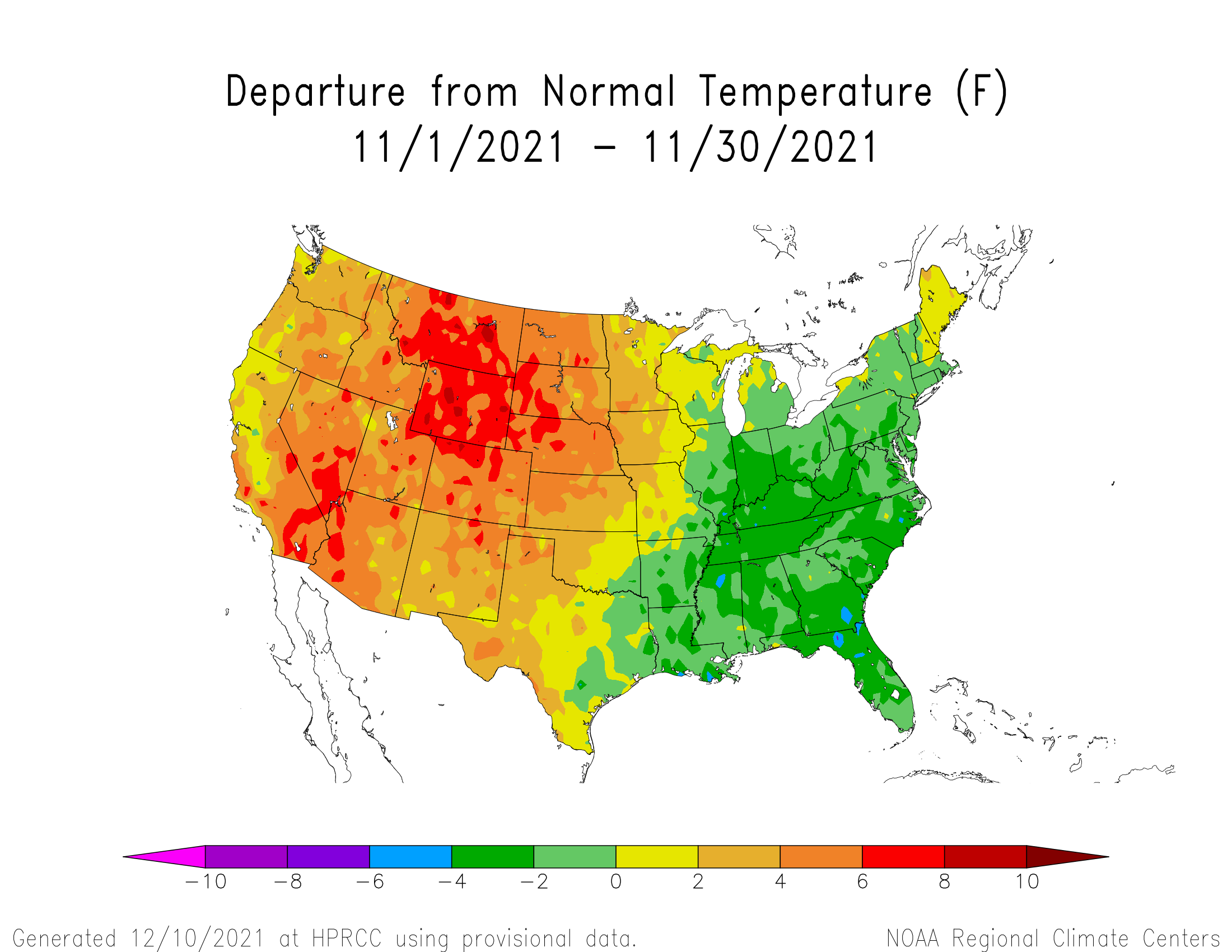 November temperature departure from normal across the U.S.

November temperature departure from normal across the U.S. 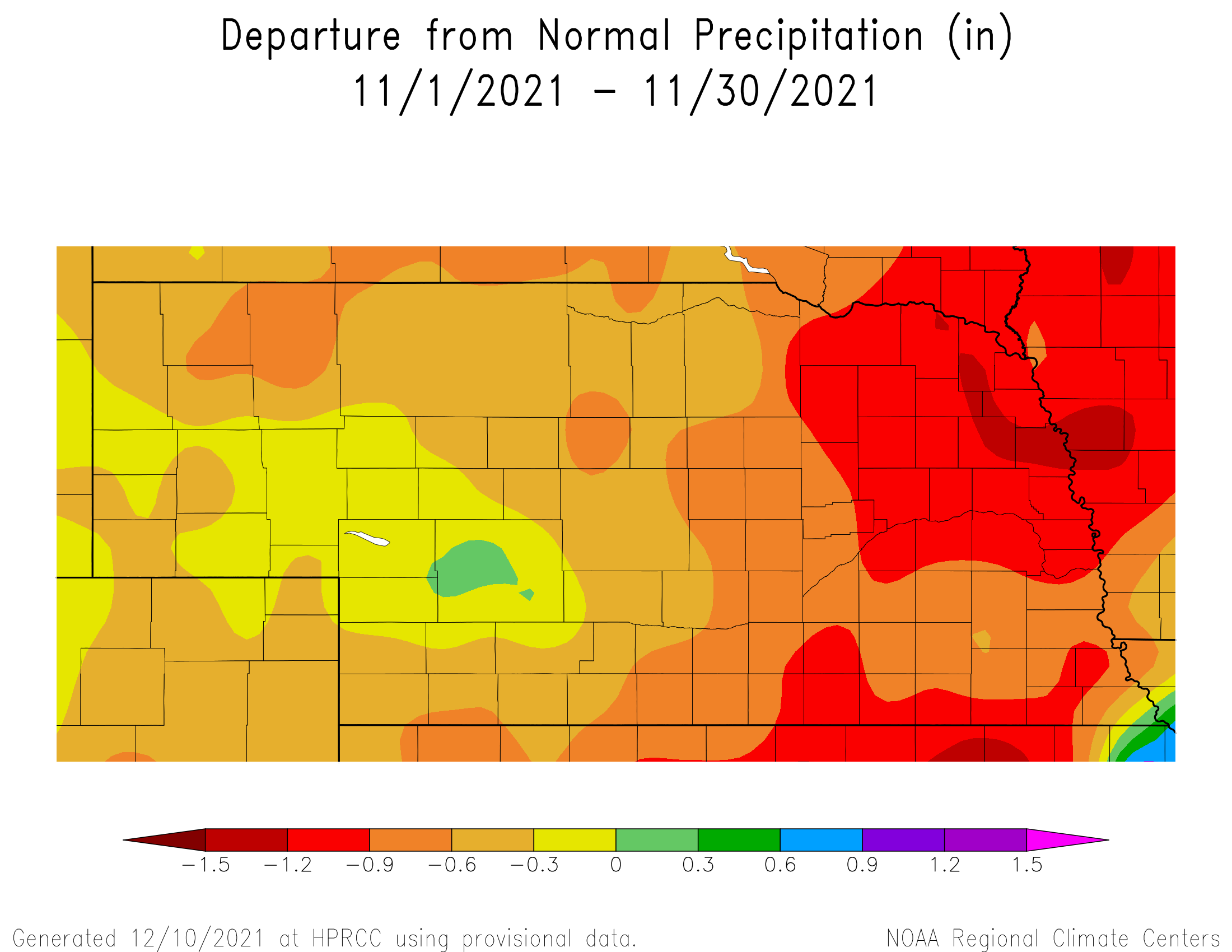 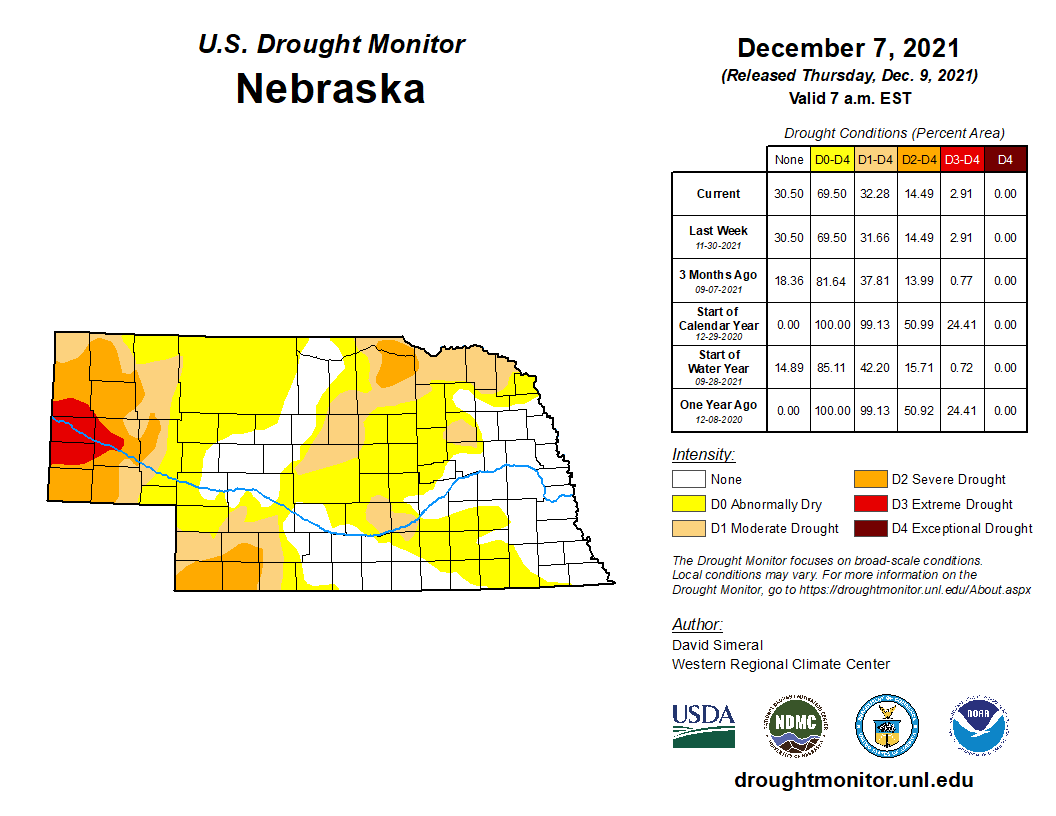 Drought conditions in early December, according to the U.S. Drought Monitor

Drought conditions in early December, according to the U.S. Drought Monitor

Nationally, we experienced the 7th warmest and 8th driest November since modern record-keeping began. Nebraska was also feeling these trends in the 5th warmest and 24th driest November. Recently, we have seen a marked trend toward warm Novembers, as well as a trend toward dryness. For the fall period (September through November), Nebraska was 3rd warmest on record with near average precipitation for the statewide average. Drought conditions degraded in the southwest and Panhandle in an ongoing area that has been missed by precipitation events over the long-term. Precipitation deficits here are greater than six inches over the past year. Currently, 32% of Nebraska is in moderate (D1) or worse drought. Extreme drought (D3) covers a swath of the central Panhandle.

In what is climatologically a light precipitation month, this November was drier than normal and ranks 24th driest since 1895. Most of the state received less than an inch of precipitation and the statewide average of 0.27 inch is 0.61 below normal. In the last 30 years, Nebraska has seen a drying trend during November of 0.22 inch per decade. The highest daily total was reported in the far southeast corner of the state near Falls City with 2.02 inches on the 11th. The Nebraska Mesonet station southwest of Rulo reported 1.96 inches. Snowfall totals were generally light around the state. Though greater than four inches fell across a swath in western counties, from Banner through Lincoln. Six inches or more were reported near Lisco, Hershey and Lodgepole. Severe weather reports were slim, as expected for this time of year, though a location east of Kearney reported a 58 mph wind gust on the 13th. Our Mesonet station northeast of Sparks reported a 56 mph wind gust on the 11th, which was an exceptionally windy day all across the state.

Nebraska was near the heart of the anomalous warmth that covered the western two-thirds of the U.S. this November. Temperatures across the state averaged 3 to 7°F above the most recent 30-year normal in the 5th warmest November on record (42.7°F, + 5.4°F). This is on step with a warming trend of 2°F per decade in Nebraska since 1991. Several daily high temperatures reaching into the mid 70s broke records around the state. Locations in central and southwest Nebraska reached 80°F and higher on the 7th and 8th, with the statewide high of 82°F reported at McCook. Temperatures did reach zero degrees in the state during November, south of Harrison on the 18th and 19th. An 80 degree spread in temperature is not uncommon for a transition season. A wind chill report on the 25th near Sparks at the Mesonet station put us below zero on the 25th at -8°F. Daily average bare soil temperatures at the 4 inch depth are generally in the low to mid-30 degree range, with some 40s still in the southeast.

Above normal temperatures and below normal precipitation helped producers finish up the harvest of warm season crops prior to the Thanksgiving Day holiday weekend. This year’s harvest lagged last year’s pace by about 10 days, primarily from the heavy rainfall received across the eastern quarter of the state the final third of October. As is usually the case when dry conditions develop during harvest, there were some positive and negative aspects associated with November’s weather trends.

Nebraska Agricultural Statistics Service reported that the soybean harvest was completed by November 21st, while the corn and sorghum harvest were completed by December 28th. The warm and dry conditions allowed producers to harvest crops without needed additional bin drying. With high fuel costs for natural gas, the ability to bin grain without drying provided a significant reduction in harvest expenses. The dry and warm weather eliminated feedlot mud issues, which translated into better weight gains and reduced disease issues. Cattle moved to harvested grain fields had easy access to feed without the need for significant supplemental feed due to cold and snow cover.

On the flip side, the dry weather led to drought expansion across the western _ of Nebraska where most locations received less than 0.10 inches of liquid equivalent moisture during the month. The lack of moisture was impeding wheat stand establishment across the Panhandle and southwest Nebraska and without surface moisture going into dormancy, winterkill and desiccation issues will be a concern until a protective blanket of snow cover can be established. High winds were an issue as the primary storm track took systems across the northern High Plains and left Nebraska south of the primary precipitation areas. High winds with gusts exceeding 30 mph were reported statewide on the 11th, 12th, 13th, 17th, 19th, 24th and 27th. Several large fires broke out across the Panhandle with the most significant fire occurring on the edge of the Wildcat Hills November 14th to the 18th where over 3500 acres were destroyed. Several of these fires that were reported occurred during the deer rifle season and were initiated by dry grass coming in contact with hot catalytic converters from vehicles driving/parking in wildlife management areas.