An oddly ‘normal’ month for November 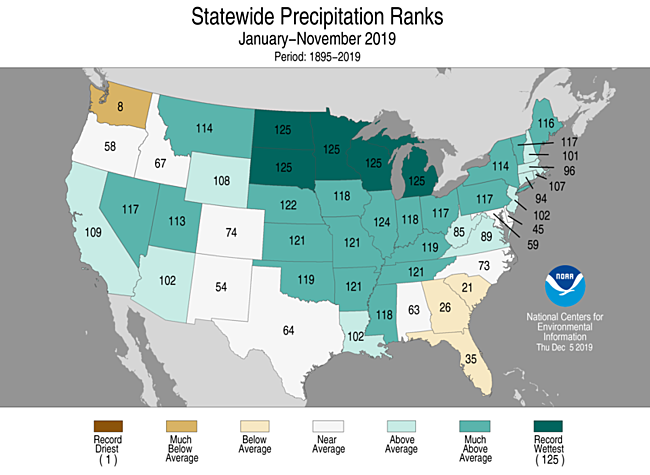 Statewide, temperatures averaged only slightly below normal and precipitation just slightly above normal. Perhaps the biggest weather story of the month was the blizzard in late November. The Panhandle received about a foot while central and northeast portions received about 10 inches of snow, along with blustery winds. Nearly 2 feet of snow was reported near Bridgeport for the month of November.

Year-to-date for 2019, Nebraska has received 30.13 inches of precipitation (the fourth wettest on record). This is almost 7 inches more than normal for the statewide average. The only higher totals are from the years 1915, 1993 and 1905. This has been the trend for much of the country, particularly for the north-central U.S.

Given the persistent wetness over the Missouri Basin, a few river gauges remained above flood stage (going back all the way to March) from Nebraska City southward.

Monthly precipitation totals averaged 0.93 inch during November, which is a few tenths less than normal. The highest totals (1.25 to 1.5 inches) were received in portions of east-central and south-central Nebraska. Statewide, precipitation has trended upward slightly with wetter conditions over the long term. Snow was plentiful in some areas with several events resulting in measurable snowfall.
Most notably was a storm moving through late in the month, accompanied by strong winds and a significant drop in temperatures. Large stretches of Interstate 80 and nearly the entire road system for the Panhandle was impassable. Several daily snowfall records were reported around the state — 6.5 inches at Norfolk, 7.1 inches at Hastings and 8.2 inches at Grand Island all set records for Nov. 26.

In a month that averaged 1.4°F below normal (35.3°F for the statewide average temperature), November was not immune to a few records. Both high and low temperature records were met or set during the month. Nov. 1 in North Platte saw the mercury dip to 4°F, a daily low temperature record. Two locations saw record cold on Nov. 12, Norfolk (-7°F) and Lincoln (2°F). Norfolk also reported a record low maximum temperature of 18°F on Nov. 11. For daytime high temperatures, both Scottsbluff and Lincoln saw a high of 74°F on Nov. 9. The statewide high was 82°F, reported at a handful of locations in the southwest. Temperatures did dip below freezing nearly statewide at some point during the month. The lowest reported temperature was -16°F.

Soil temperatures remain above freezing, for the daily average. Moisture levels in the soil profile remain high for large portions of the state, most significantly in the south-central and east. If you’re looking to track these parameters as winter progresses, the Nebraska Mesonet now offers a look at the previous day’s conditions, for both temperature and moisture. These are available for five depths (2, 4, 10, 20, 40 inches) and include bare soil and vegetated conditions.

The winter outlook from the Climate Prediction Center puts Nebraska and a large swath of the north central U.S. in a category of increased chance of wetness. Given the lack of an equatorial Pacific signal, persistence is a driving factor for this prediction. Of course, the nature of wetter than normal is not discerned, rather the three-month average. Impacts can be a function of how this precipitation would be received and the timing. Temperatures do not show a tendency in the winter outlook for essentially this same area. One factor we will keep an eye on that impact temperatures is Arctic circulation patterns and jet stream setup.

Nebraska’s statewide weather network operated by the Nebraska Mesonet at the University of Nebraska-Lincoln cataloged the following extremes this November: 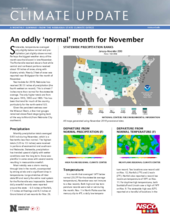