Precipitation varies across state in a warmer than normal October 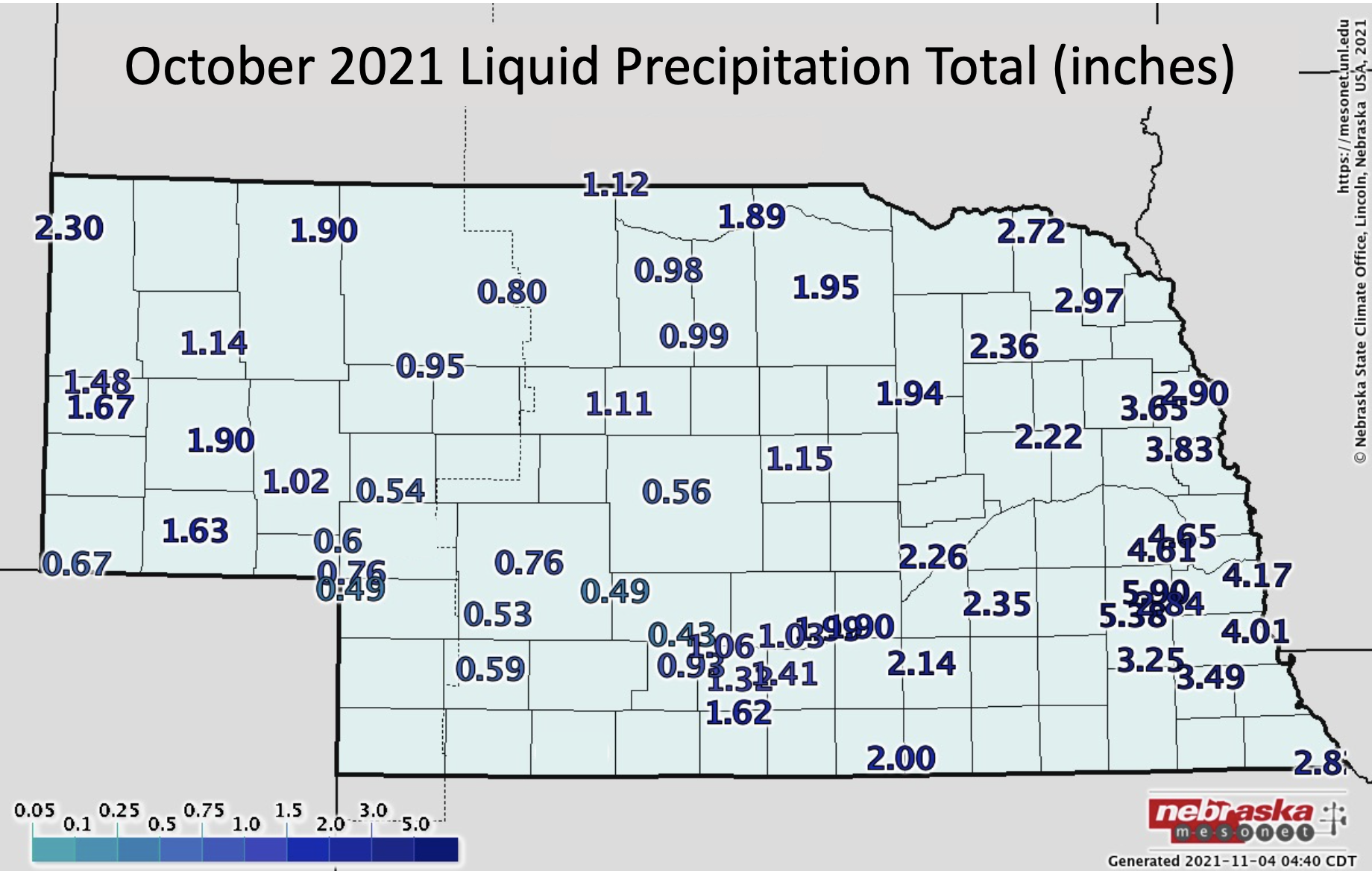 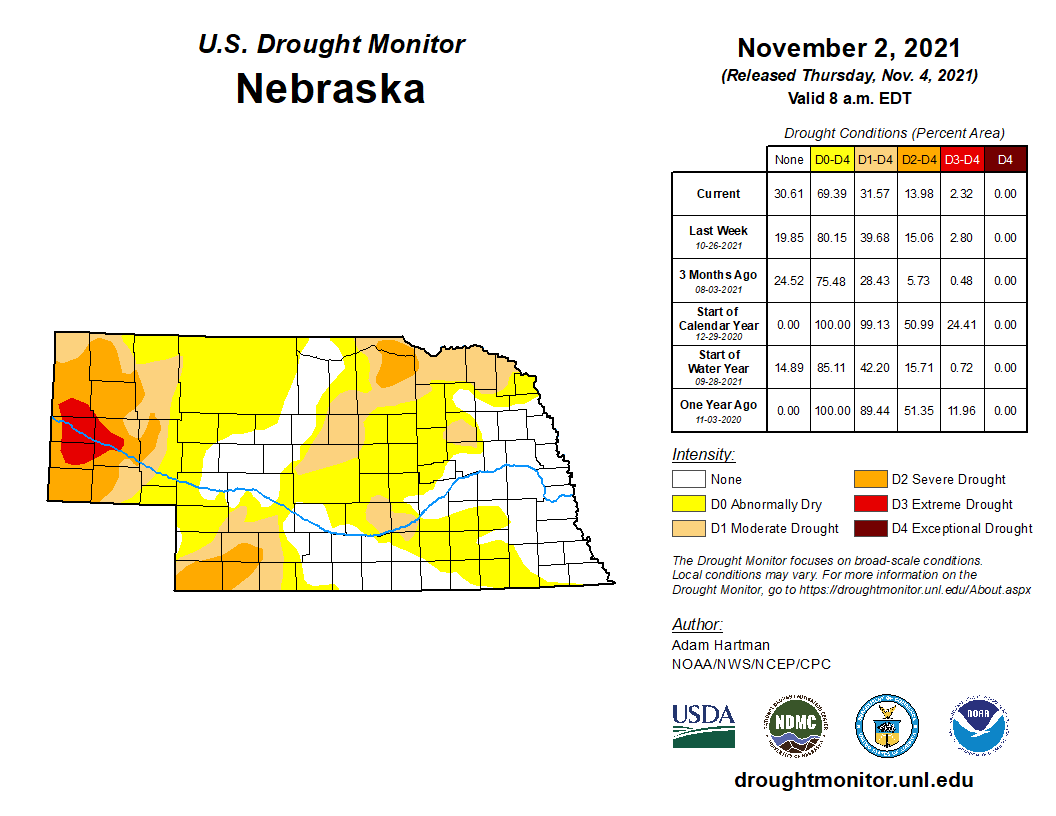 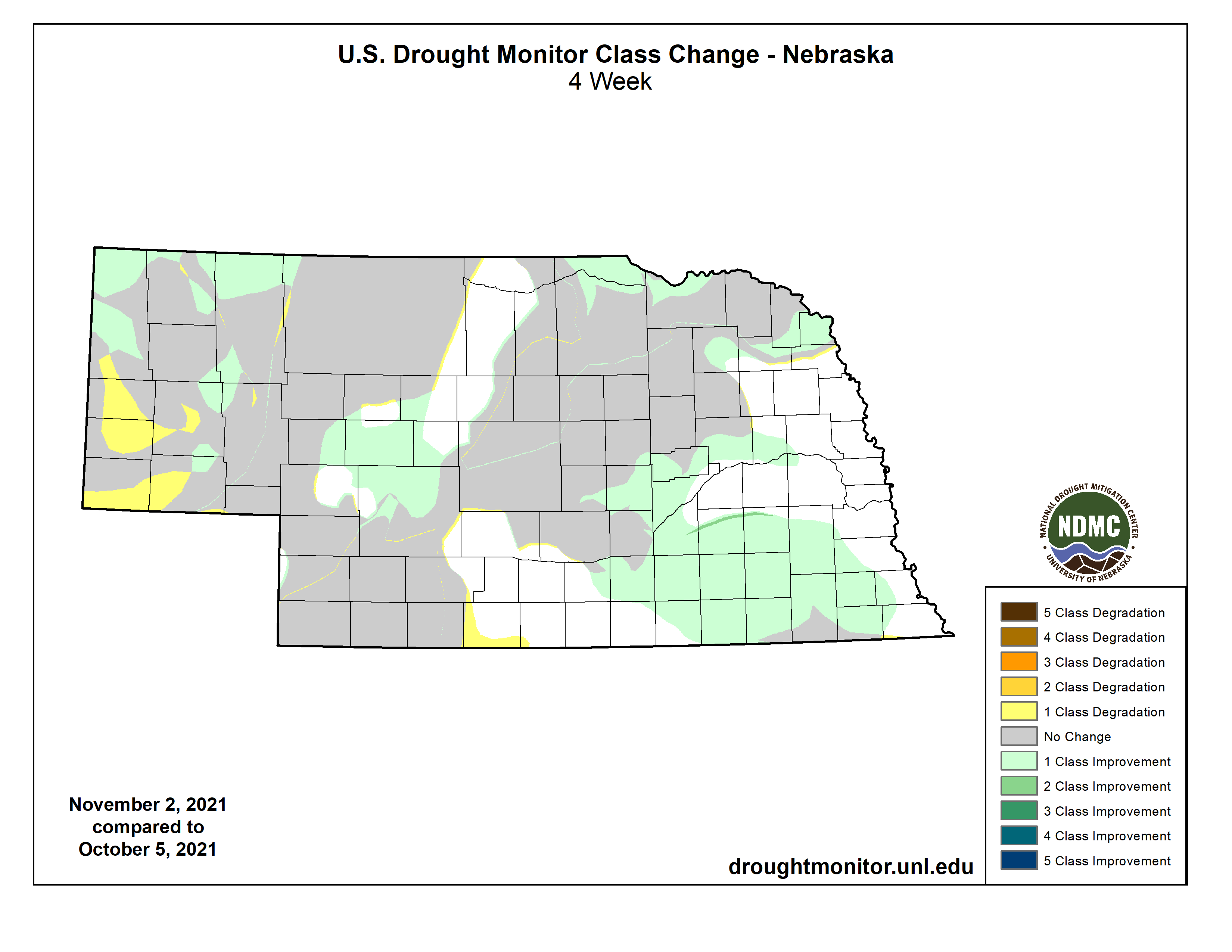 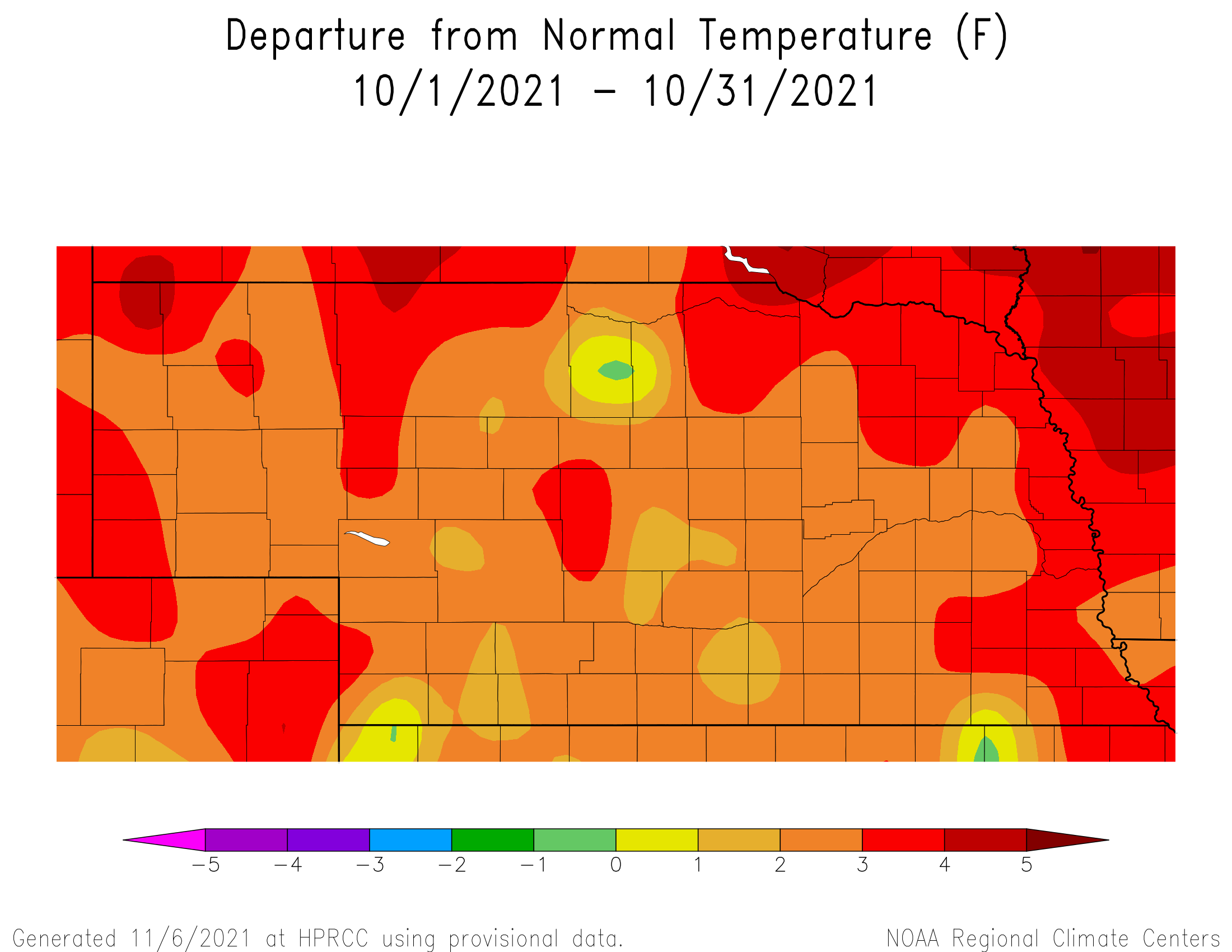 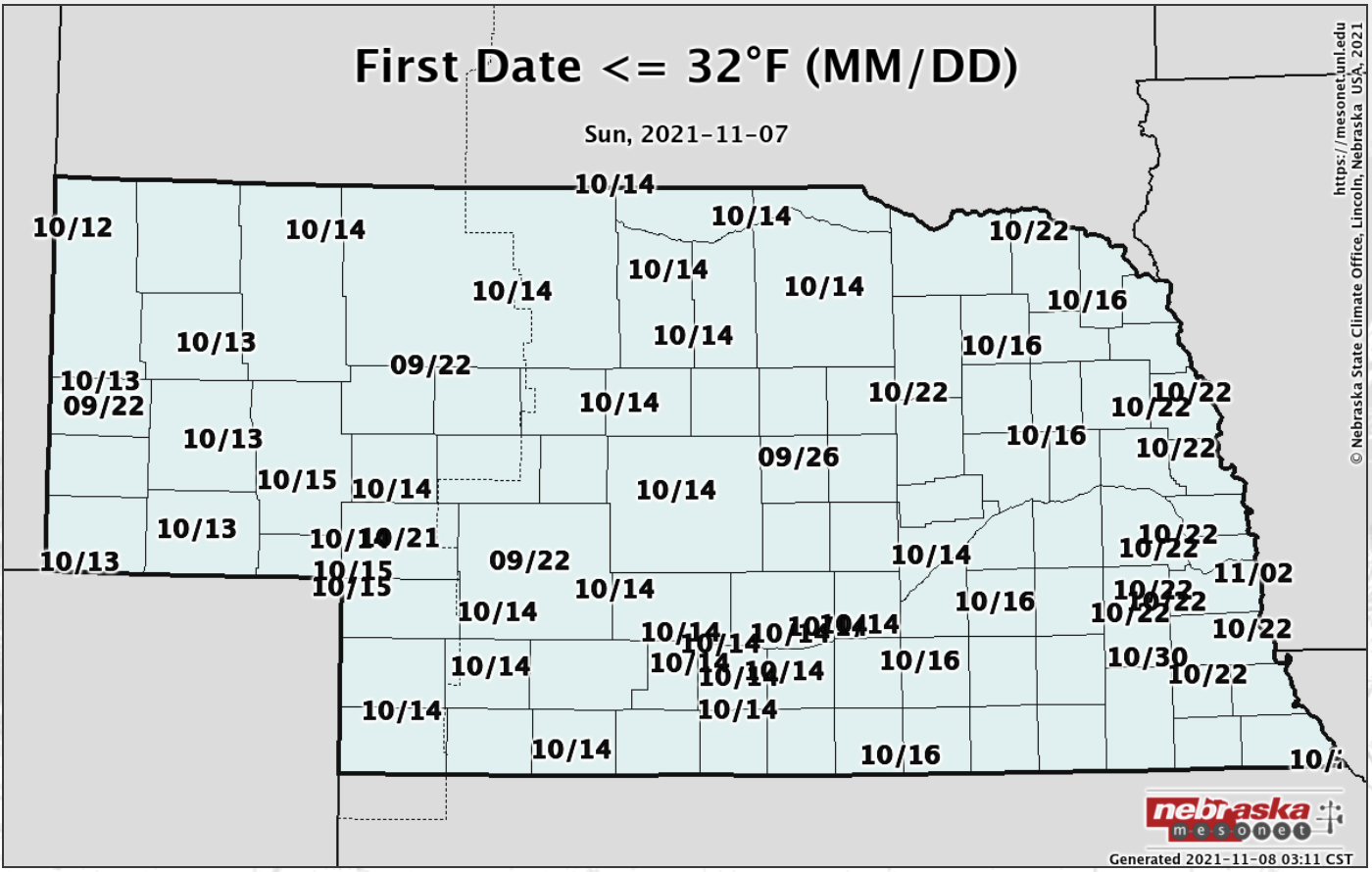 Temperatures were above normal across Nebraska, and much of the U.S., this October. Precipitation was the bigger story statewide, with heavy rain across portions of the east where 3 to 5 inches were reported and some daily records were broken. As such, dryness conditions were alleviated for portions of the state, though 32% remain in moderate or worse drought at the start of November. Freezing or lower temperatures were reached throughout much of the state and half a foot of snow occurred in the west. La Niña conditions have developed and are expected to continue through the winter. As such, the winter climate outlook has Nebraska situated between an enhanced likelihood of wetter than normal for areas to our north and drier than normal for areas to our south. Temperatures are leaning above normal for the three month winter period.

The statewide average precipitation this month was 1.88 inches, which is slightly above average. Though this reflects below normal conditions for a large swath of central and southwest Nebraska and above to well above normal in the Panhandle and eastern quarter of the state. The highest monthly totals were observed in east central Nebraska where greater than five inches fell (a few inches above normal for October). Six to seven inches were reported for portions of the Lincoln and Omaha metro areas. Meanwhile, less than an inch was reported for a fair number of observing stations across portions of the Sandhills, southern Panhandle and southwestern counties (about an inch below normal).

Forty percent of the U.S. is in moderate or worse drought and Nebraska has generally been situated at an edge of transition between wet and dry conditions. The most intense drought conditions lie west of the state. Extreme drought (D3) covers portions of Sioux, Scotts Bluff, Banner and Morrill counties. Areas of the Panhandle, southwest and northeast are running less than 70% of normal precipitation for year-to-date totals (~6 inch deficits). Soil moisture in these areas are similarly in a deficit. Conversely, pockets of wetness exist for portions of the east and southcentral. In these areas, the soil moisture profiles are exceptionally good for this time of year.

The statewide average temperature this October was 53.2°F, which is 2.8°F above normal. Over the long-term, temperatures statewide show no warming or cooling trend. Though the past 30 years have seen a general cooling along with high variability (ranging from 42°F to 55°F). Much of the state reached their first freezing temperature of the season during October, from the second to third weeks of the month. For most areas, this is one to two weeks later than average. Furthermore, temperatures dipped under 28°F as well during October for a majority of the state. Temperatures below ground are cooling off seasonally with a daily average (4 inch depth) under bare soil of 40s in the west to mid 50s in the east. The statewide high temperature for the month was 89°F, observed at a handful of locations, though all reporting stations across Nebraska got to at least 80°F. The statewide low was 19°F, observed south of Bushnell.

The Nebraska Mesonet station south of Arthur reported a 55 mph wind gust on the 13th. Severe weather was quiet, as is typical for October, with one tornado (south of Harrisburg), two high wind and two hail reports.

Harvest weather delays were minimal for the first three weeks of October and local observations indicate that above normal temperatures were observed statewide for the first 12 days of the month. A storm system crossing the central Plains on October 13 resulted in at least 0.25 to 0.75 inches of moisture, with pockets of 1 to 2 inches of rainfall over the northern Panhandle, south central and extreme east central Nebraska. Little significant moisture was received October 14 to 23 which gave producers another long stretch of favorable harvest weather.

Two storm systems then moved across the central Plains October 24-25 and October 26-27 and brought significant moisture to eastern Nebraska. Between these two systems, the eastern half of the state received 1 to 6 inches of precipitation with the highest totals occurring across east central and southeast Nebraska where pockets of 3 to 6 inches were reported. Although harvest activity ground to a halt through the end of the month across eastern Nebraska, the lack of moisture over the western half of the state allowed producers to continue harvest activities without interruptions. The positive aspect of these two storms was that most of the southeastern quarter of the state received enough moisture to reduce and/or eliminate the drought conditions from dry pattern that developed the second half of this past summer.

The Nebraska Agricultural Statistic Service (NASS) indicated in their October 3rd crop report that 21% of the corn and sorghum crop had been harvested, while the soybean harvest stood at 34% complete. When NASS issued their final crop report November 1st for conditions through October 31st, the corn crop harvest stood at 72% complete, the soybean crop was 91% complete and the sorghum harvest was 78% complete. Although last year’s harvest past was slightly quicker than this year, the 2021 fall harvest data shows that the harvest pace of these three crops exceeded the 5-year average harvest pace in each crop report issued by NASS during October.