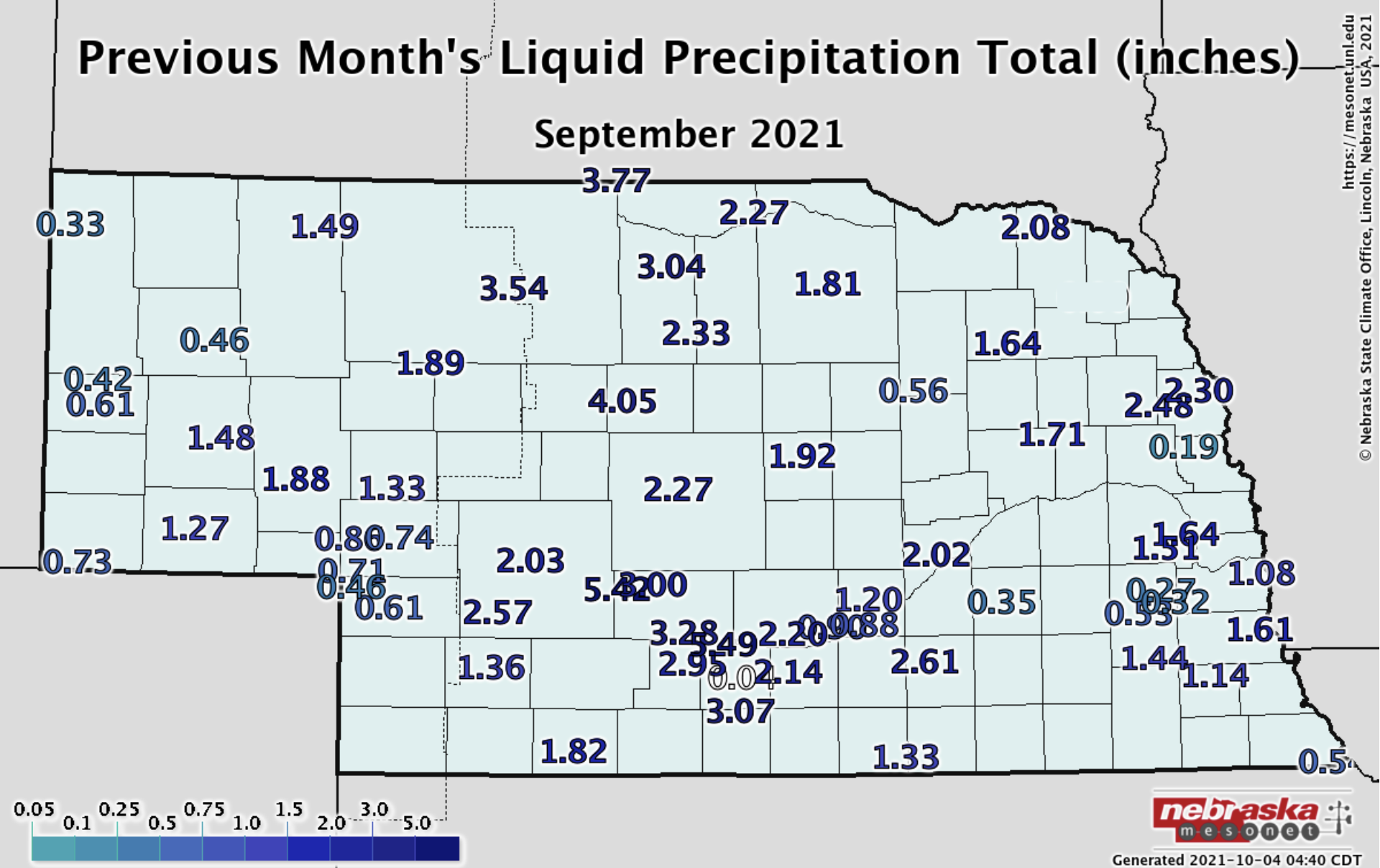 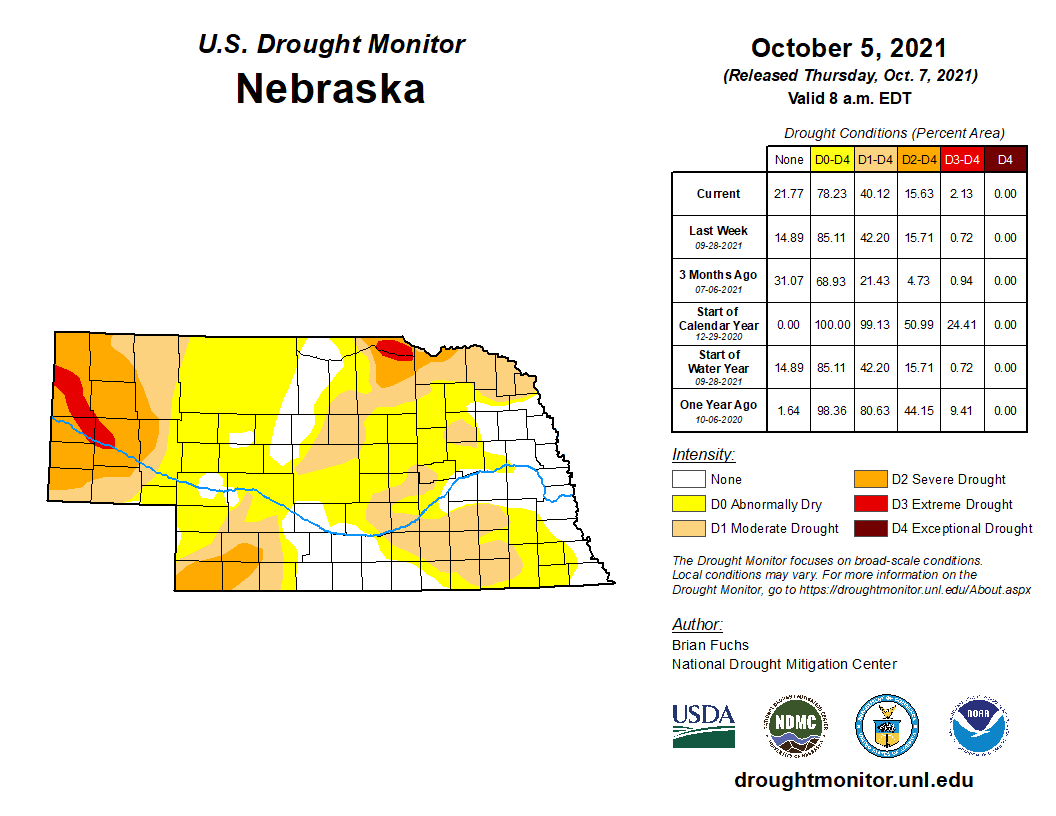 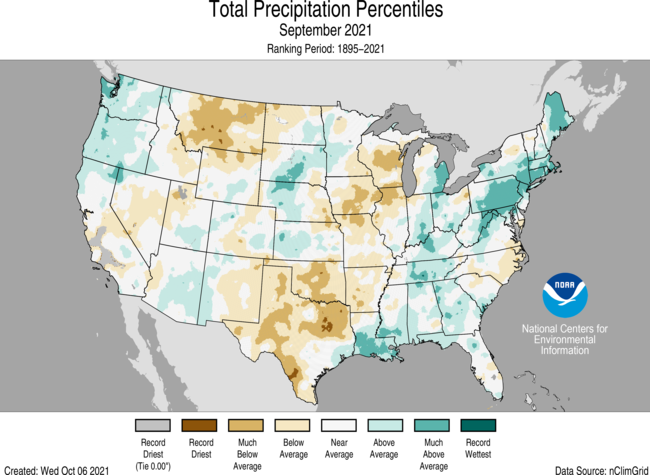 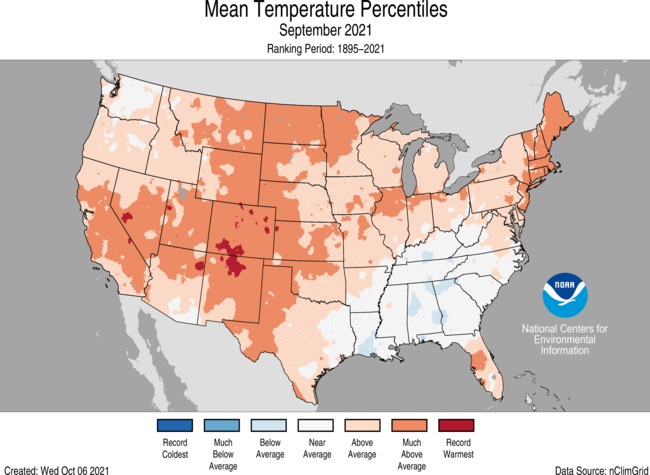 Temperatures were above average across Nebraska in our 11th warmest September, continuing a climate warming trend we have experienced both in recent decades and over the past century. Record high temperatures in the 90s and 100s were reported from west to east during the month. Precipitation conditions were on the dry side of normal overall, except for appreciable rains in central Nebraska and counties east of Norfolk. The heat and dryness led to an overall worsening and expansion of drought conditions around the state, now covering 40% of Nebraska. Portions of the west and northeast remain in severe to extreme drought and 38% is abnormally dry. Wildfires occurred in the Panhandle two fires 70 miles apart burning more than 9,000 acres in total. In what is some potential good news regarding precipitation, the Climate Prediction Center has placed increased chances for wetter than normal conditions for October, along with warmer than normal temperatures.

As is typically the case for precipitation, some areas received an inch or more above normal and some areas an inch or two below. Relatively high rainfall amounts occurred in a north-south swath through central Nebraska. Portions of Brown and Rock counties and areas south through the Sandhills received the highest monthly totals (four inches or greater), as well as southcentral counties from Kingsley Dam east to Holdrege. The highest reported total near Purdum was 6.9 inches. In the west, precipitation was general an inch or less, with the highest amounts around Alliance of 2.5 inches. Areas in the east received a monthly total in the range of half inch to two inches.

The statewide average precipitation was 2.02 inches, which is just below compared to normal. There is a slight drying trend overall for September precipitation amounts across much of Nebraska. An exception is in the southeastern quarter of the state, which has seen an increase in precipitation during September.

As a combination of warmth and dryness dominated much of the state during September, Nebraska saw an overall expansion and worsening of abnormal dryness and drought conditions. We started the month with 44% of the state abnormally dry and 39% in moderate to extreme drought conditions. By early October, extreme drought was introduced in the panhandle for portions of Sioux, Scotts Bluff and Morrill counties, abnormal dryness expanded in portions of central and southeast Nebraska, though beneficial and localized rains in excess of several inches alleviated D0 in portions of the Sandhills and south central.

Year to date precipitation departures are strongest in the northeast, west, portions of the southwest and southeast with six inches or greater below normal. The parched west succumbed to two wildfires thanks to low humidity and high winds. The Post fire burned more than 5,400 acres near Crawford (south of Highway 20 and west of Highway 71) and the Vista Trend fire burned about 3,600 acres southwest of Scottsbluff. As harvest season is underway and fall outdoor activities are planned, it is important to be cognizant of wildfire risk given the extent of dryness across the state.

With severe weather season winding down, there were a total of 9 hail reports and two high wind reports, occurring on the 1st, 4th, 5th and 19th. Each event occurred in the western half of the state. An isolated thunderstorm in the southwestern county of Dundy resulted in a wind gust of 76 mph reported at the newly installed Nebraska Mesonet station at Enders 10 SW.

The average statewide monthly temperature for September was 3.6°F above normal at 67.4°F, which ranks as 11th warmest on record. All of Nebraska’s reporting stations were warmer than normal. Quite a few daily high temperature records were tied or broken during the month. Chadron, Alliance, Scottsbluff, Sidney, Valentine, North Platte, Grand Island, Hastings, Norfolk, Lincoln and Omaha all reported one or more new records. Chadron reported the most with five daily high temperature records throughout September. The Nebraska Mesonet’s newest station (Enders 10 SW in Dundy County) reported the statewide high temperature of 105°F. More than a dozen weather stations broke the century mark, mostly in the west. Holdrege 5N reported a heat index temperature of 106°F on the 11th. The month was not without cold weather, however, as a handful of stations reached freezing or lower in the west. The statewide minimum of 29°F occurred in Sioux County, near the communities of Agate and Harrison.

The warmer than normal conditions are not so abnormal lately. September has experienced warming over time across Nebraska. Since 1895, we have warmed by 1.2°F and the rate of warming is speeding up. The last three decades (since 1991) has seen 3.6°F of warming statewide.

Although September did bring drier than normal conditions to parts of eastern, southern and western Nebraska, normal to above normal moisture was observed across north central, northeast, central and south central Nebraska. Most of the moisture this past month fell the first and last week of the month. The late August rainfall and early September rainfall helped with late corn grain fill and soybean pod fill, plus offered some hope that the extremely dry and warm conditions experienced during the fall of 2020 might not be as dramatic this fall. Warm and drier than normal conditions during the middle two weeks of the month for rapid dry down of maturing crops and helped push producers into initial harvest activities.

Soybean harvest was proceeding well but producers were complaining about the moisture content of harvested grain dropping from the middle teens during the morning hours into the high single digits during the prime afternoon heating hours. Most of the corn harvest completed so far was either done before soybeans were ready for harvest or was directed toward fields that had stand issues due to weather, pests, and diseases. Once again, producers noted how rapidly the crop was drying down due to the very low relative humidity levels experienced during the middle two weeks of the month. Very beneficial rainfall hit the western half of the Sandhill region, which improved prospects from fall grass regrowth and the potential for better subsoil moisture recharge compared to a year ago.

Compared to CPC’s preliminary October outlook for temperatures and precipitation issued September 16th, the most dramatic revision was to remove below normal precipitation from the Nebraska I-80 corridor southward through Texas and places a substantial portion of the central United States from the Canadian to Mexican border in an area expected to receive above normal moisture. CPC has increased the likelihood of above normal temperatures over the Great Lakes, Minnesota, Wisconsin, eastern South Dakota and the northeastern two-thirds of Iowa by one full probability level (40-50 percent increased to 50-60 percent). For Nebraska temperatures, CPC has kept the odds of above normal conditions the same as their preliminary outlook in mid-September except to remove the slightly lower odds across the northwestern corner of the Panhandle to the southwestern corner and added the extreme southwestern corner of the southwest agricultural district into the 40 to 50 percent range.