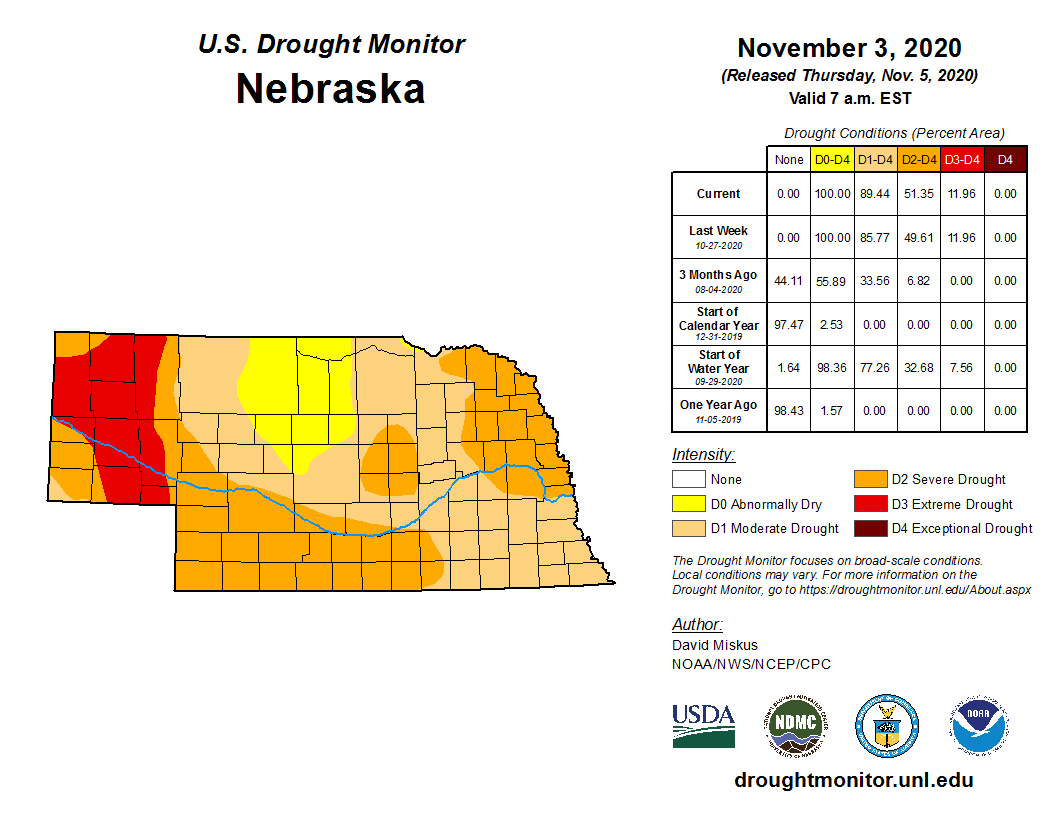 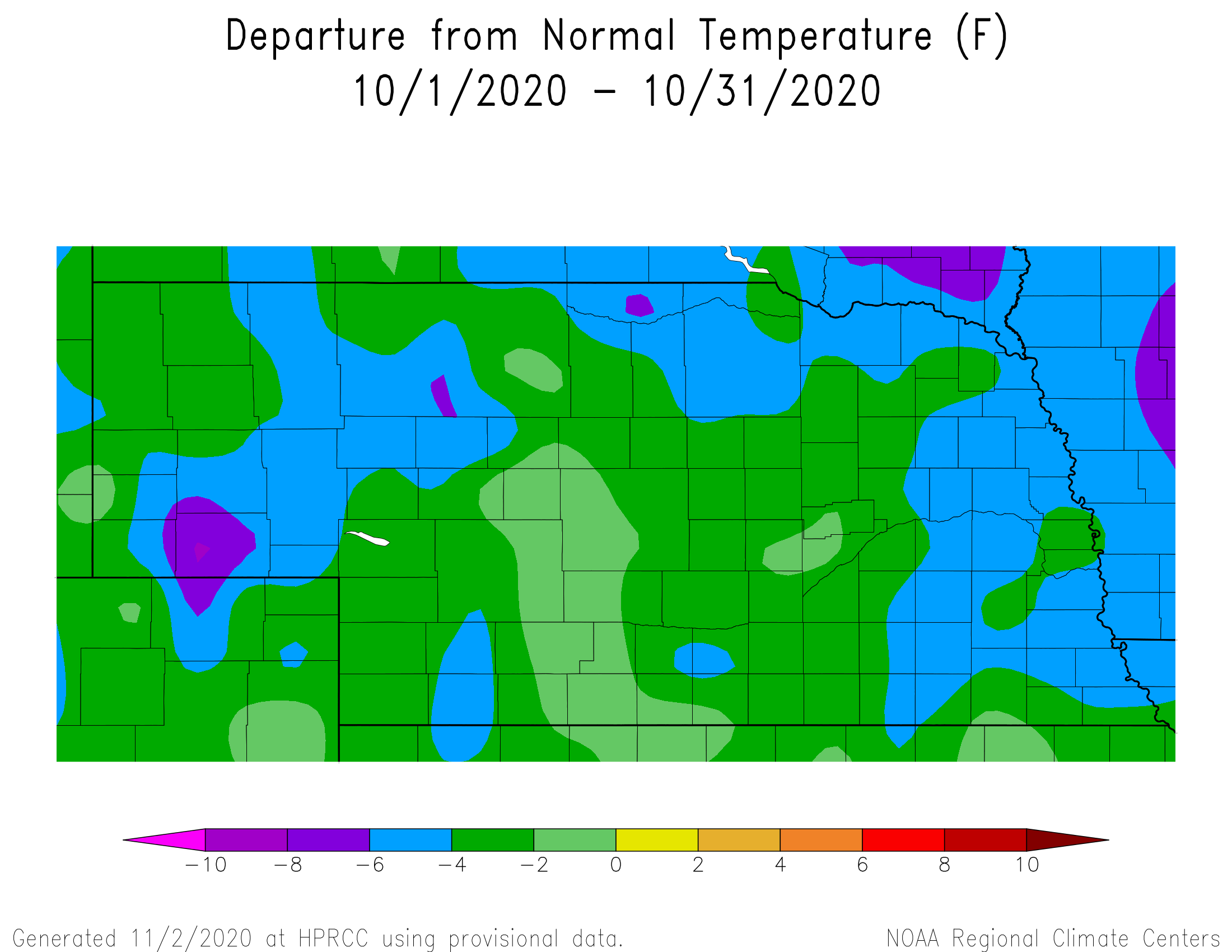 October brought a little bit of everything this year it seems. Record heat and temperatures in the 90s occurred during the second week of the month. Record cold and new all-time October low temperatures were reported late in the month. A storm brought more than a foot of snow to portions of the panhandle along with the cold weather. Drought conditions continued to worsen in another month of below normal precipitation. At the start of November, moderate to extreme drought covered 89% of the state.

Precipitation was scant for most of Nebraska this October with monthly totals ranging from less than a tenth of an inch to about 1.5 inches. This represents about one to two inches below average, 25% or less of normal. October represents an important soil moisture recharge month here in Nebraska and the light precipitation totals only contributed to the ongoing precipitation deficits. Snowfall was plentiful in areas of central and western Nebraska. Up to 10 inches was reported in portions of the Sandhills and Panhandle, including 18 inches southwest of Bridgeport. Water equivalence of Nebraska snows is generally light and unfortunately this doesn’t translate into a lot of precipitation. Ground temperatures are above freezing, however, so the melted snow was able to percolate the generally parched ground. The statewide average precipitation was 0.56 inches, which is 16th driest and 0.86 less than normal.

Although the month averaged three to six degrees below normal, temperatures had some wide swings with both record highs and lows. On October 9th, several daily high temperatures were tied or broken around the state (Chadron, 92°F; Alliance, 86°F; Valentine, 91°F; North Platte, 95°F; Grand Island, 91°F; Omaha, 88°F). These temperatures are 20 degrees warmer than the normal high for this time of year. Conditions changed during the latter part of the month with record low temperatures reported on the 25th through the 27th. Daily high temperatures in the high teens to just below freezing were lower than the normal daily minimum temperatures. Low temperatures set new records with readings below zero in the west to teens in the east. Most notably, the Alliance airport station reached -14°F on the 26th, a new all-time low temperature for October in Nebraska. The Nebraska Mesonet station at Scottsbluff 2NW also reported a low of -14°F on the 27th. The cold weather was relatively short lived as temperatures rebounded by the end of the month. Temperatures averaged 46.5°F, which is 15th coldest on record and 4.3° below normal.

Harvest activity proceeded at a quick pace during the month of October, even with the snow events that occurred during the October 20th – 26th period. The most significant harvest period of harvest delays occurred October 25th – 28th in direct response to heavy snowfall that occurred across the Panhandle and north central Nebraska. In fact, this storm represented the most significant weather delays experienced by Nebraska producers since the Labor Day week storm system at the beginning of the fall harvest period. Harvest acreage reports from Nebraska Agricultural Statistics (NASS) indicate that the soybean harvest was complete by November 1, compared to 55% on September 29. The corn harvest stood at 86% complete, while the sorghum harvest was 92% complete. On September 29th, the corn harvest stood at 21% complete, while the sorghum harvest was only 17% finished. Harvest activity proceeded at a rapid pace this fall due to drier than normal conditions. Unfortunately, soil moisture levels deteriorated up to the snow storm October 25-26 and the moisture received was only sufficient to undo the deterioration experienced the first 3 weeks of the month. Topsoil moisture was rated by NASS on September 29 as being 67% poor to very poor and 68% poor to very poor on November 1. Subsoil moisture readings deteriorated from 60% poor to very poor on September 29 to 66% poor to very poor on November 1. In short, the snowstorm was impressive, but the moisture associated with the event was insufficient in quantity to improve subsoil moisture levels, while holding surface topsoil moisture levels from further deterioration.

The Climate Prediction Center (CPC) released their November temperature and precipitation outlooks October 31st. CPC projects above normal temperatures for the United States, except for equal chances of above, normal, or below normal temperatures over the Pacific Northwest and northern Rockies. Below normal precipitation is projected for the southern Great Basin, southern and central Rocky Mountains, southern and central High Plains (including Nebraska), along with the southeastern United States. Above normal moisture is forecast for the Pacific Northwest and the northern half of the northern Rocky Mountains. If the American GFS model runs at the end of October verify, three strong storm systems will cross the state between November 8th and 16th. Below normal temperatures and above normal precipitation would be favored from Nebraska northward to the Canadian border as Arctic air will pull southward into Nebraska after each system passes to the east of the state. Based upon storm track solutions offered by this model, the eastern half of the state appears to have the best odds for above normal moisture and below normal temperatures. 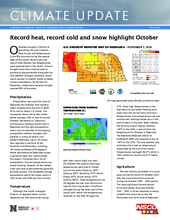