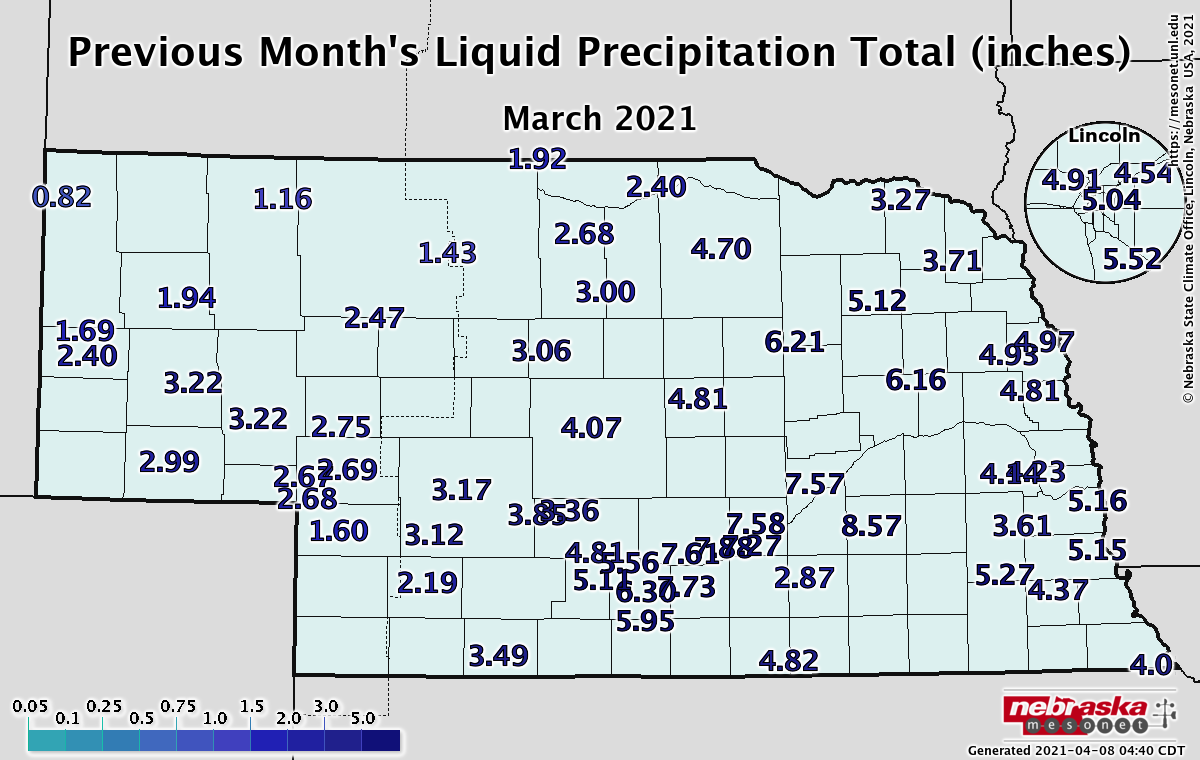 March precipitation from the Nebraska Mesonet

March precipitation from the Nebraska Mesonet 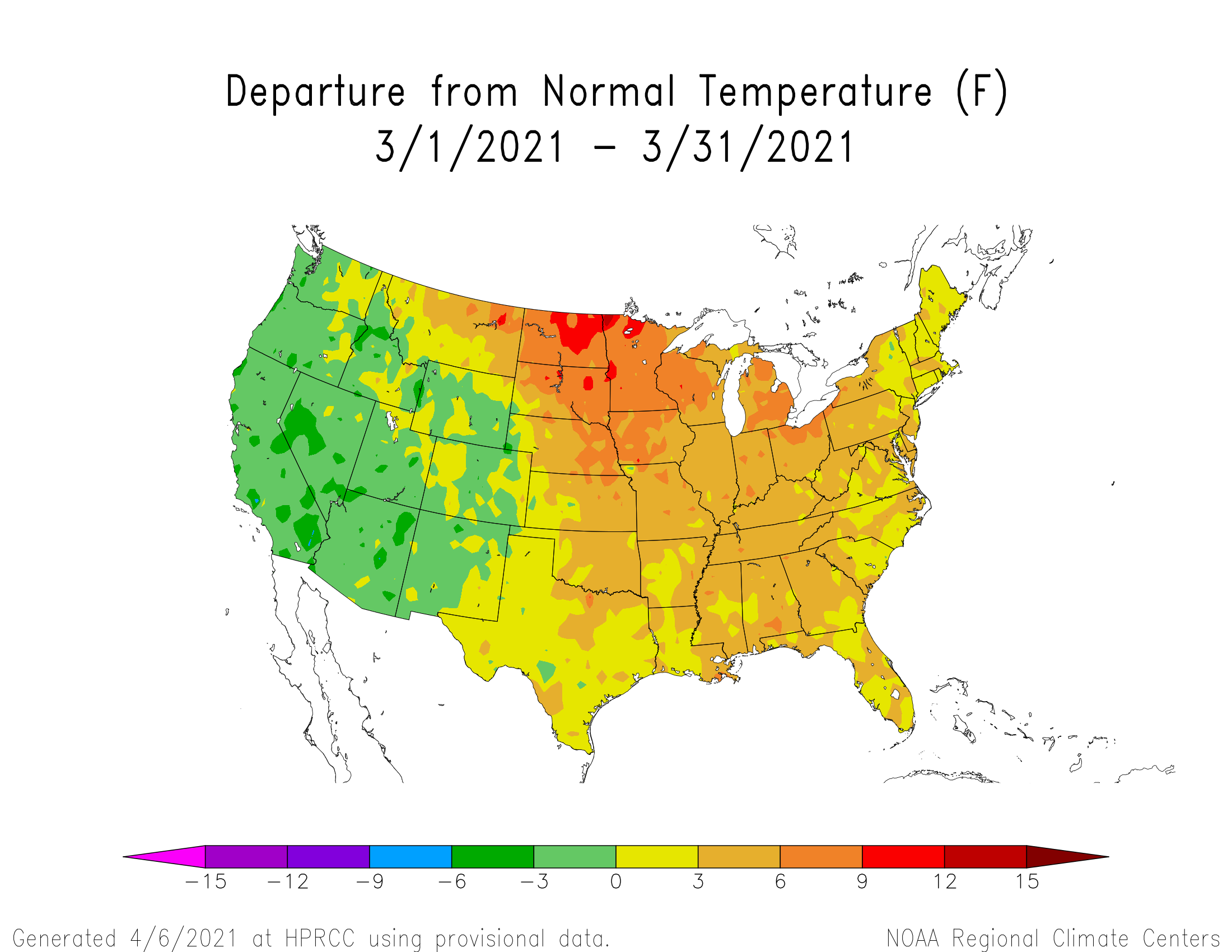 March temperature departure from normal for the U.S.

March temperature departure from normal for the U.S. 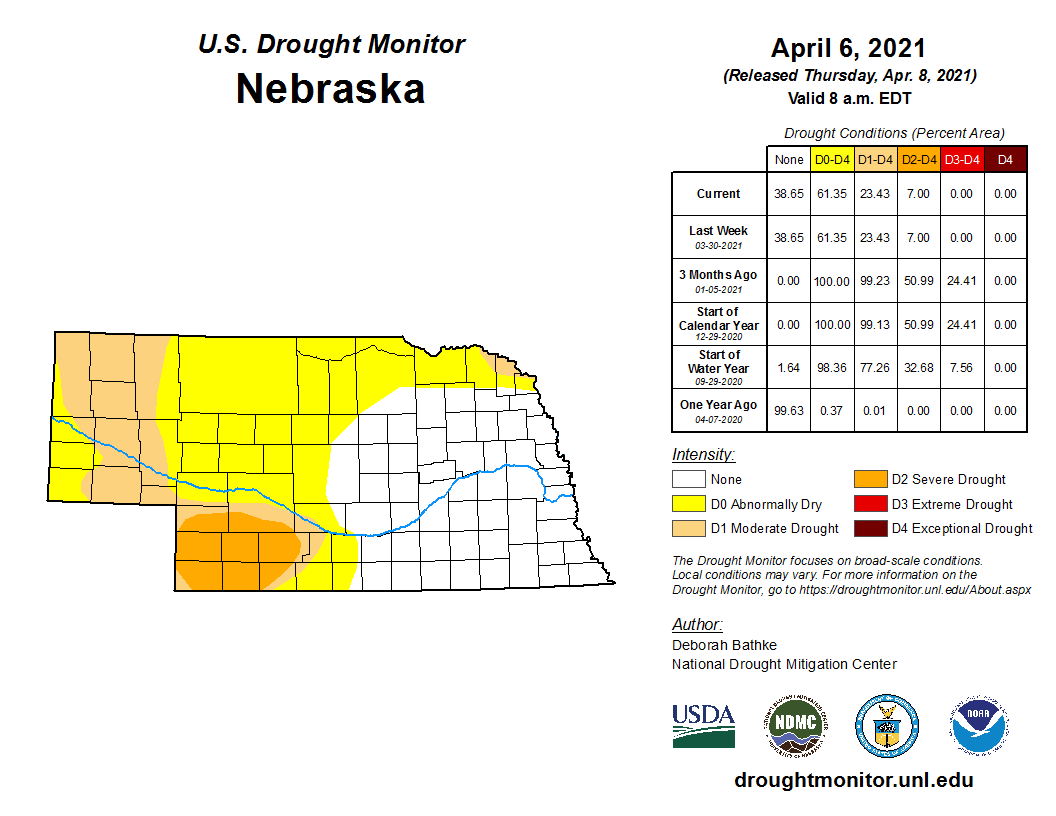 Wetter than normal conditions dominated the state during March and new monthly records were set in the tri-Cities area. Overall, it was the second wettest March for Nebraska on record. A significant spring storm, not unlike that which occurred in March of 2019, punctuated the month. Thankfully, the lack of snow cover and significant river ice, unfrozen and relatively dry soils led to very little flooding impacts this time around. Temperatures were relatively warm overall for the eastern half of the state while cooler than normal conditions prevailed in the Panhandle. The U. S. Drought Monitor showed at least a one category improvement statewide for March and moderate to severe drought covered 23% of the state by month’s end.

Rain, rain, and more rain. Nebraska had it's second wettest March on record with 4.00 inches for the statewide average, which is 2.73 above normal and is about half inch behind the wettest March (1987). Precipitation was four to five times the normal amount for the official observing stations at Grand Island, Hastings and Kearney. All three locations reported their wettest March on record. Grand Island had a whopping 8.65 inches, two inches above the previous record. Daily records were also set on the 14th (2.75 in) and 22nd (1.40 in) here. Hastings reported 8.16 inches and Kearney had 7.55 inches. Hastings also reported daily rainfall records on the 14th (1.84 in) and 22nd (1.90 in). Other areas around Nebraska (Omaha, Lincoln, Norfolk and North Platte) also reported daily rain records thanks to mid and late March storms. The total monthly precipitation was at least 1.5 inches above normal for much of the state, except areas that remain in the grips of drought conditions – Panhandle, southwest and northeast. Soil moisture conditions responded to the excessive rains as the profiles were able to recharge. The longer-term dry conditions in the Panhandle, southwest and northeast are keeping these areas in moderate to severe drought.

March is typically the time of year when severe weather ramps up. In fact, during the middle of March we have severe weather awareness week. It is important for everyone to refresh their severe weather toolkit, which includes knowing your safe place, having access to watches and warnings (such as a NOAA weather radio) and evaluating and restocking your emergency storm supplies. One tornado was reported in southwest Nebraska, two miles west of Trenton, on the 14th. Four hail reports were submitted on the 26th for the southwest and southcentral and one high wind event was reported in northcentral Nebraska. High winds were associated with the mid March storm. The Nebraska Mesonet station just north of Oshkosh reported a 65 mph wind gust (at 9 ft).

Much of the eastern two-thirds of the U.S. was warmer than normal this March, with the strongest departures found to our north in the Dakotas (> 9°F above average). For Nebraska, the temperature departures were highest in the east (>6°F above average) with a westward gradient toward less warm temperatures. The western Panhandle reported slightly below normal conditions for the month. The statewide average temperature of 42.6°F ranks as the 10th warmest on record and is nearly 4°F above average. Much of the state reported temperatures in the 70s with some areas seeing 80°F and warmer. Holdrege was the warm spot, reporting a high of 88°F. Temperatures also dipped into the single digits in the northwest with Harrison reporting a low of 1°F. The lowest temperatures for the rest of the state was in the teens and twenties. Several stations reported record high minimum temperature in the 44°F to 50°F on March 9th (Omaha, Lincoln, Norfolk, Grand Island, Hastings) while North Platte and Valentine hit 81°F and 78°F, respectively to set new record highs for this day. Soil temperatures at the four-inch depth are generally above 50°F for the weekly average.

Significant moisture fell across a substantial portion of the state March 13-15 in conjunction with a slow moving upper air low that ejected out of the southern Rockies. Heavy snowfall and blizzard conditions impacted the western half of the Panhandle, while 4-8 inches of rainfall blanketed central through eastern Nebraska. This was followed by another slow moving upper air low March 22-23 that brought 2-5 inches of additional rainfall to central through east central Nebraska.

Although blizzard conditions occurred during calving season, there was ample warning of this system allowing ranchers to take proactive measures to protect livestock. The abundance of rainfall did create muddy fields and feedlots, but this was offset by the benefits of soil moisture recharge. This single event recharged the top one foot of the soil profile statewide to field capacity according to the Nebraska Mesonet soil moisture sensor data. Moisture was so significant that precipitation deficits incurred since the beginning of the soil moisture recharge period beginning in October were eliminated. Precipitation deficits for this period are now confined to extreme northeast Nebraska and the western third of the state. Precipitation surpluses of 1-6 inches cover most of central, south central, east-central, and southeast Nebraska. Field capacity across this region has been achieved at the 4-5 foot level which indicates an ample supply of moisture for early season growth.

The Climate Prediction Center (CPC) released their updated April temperature and precipitation outlooks March 31. Temperatures are projected to be above normal across most of the eastern two-thirds of the United States with a high probability that Nebraska will experience similar conditions. The weakest chance of above normal temperatures was assigned to the northwestern Panhandle.

CPC indicates that below normal conditions are expected across the southern and central Rockies, along with the western third of Nebraska, Kansas, Oklahoma and Texas. The highest odds of this occurring are assigned to Colorado, Utah, southern Wyoming and west central Kansas. Eastern Nebraska has been assigned equal chances of above normal, normal, or below normal precipitation. Further north, CPC indicates that above normal precipitation will impact North Dakota and the northern three-quarters of Minnesota. The GFS model indicates very warm conditions will prevail through April 8 with no measurable moisture in the forecast. An upper air trough is projected to move into the northern Plains by April 10th and bring moisture to the Dakota’s and Minnesota. Further south there is more uncertainty in regards to precipitation. Cool temperatures are projected to last through mid-month before another ridge builds into the central Plains and temperatures return to the 70’s and 80’s. There are indications that another upper air trough will begin to impact the western corn belt the final week of April. Depending on the precipitation that develops from April 10-15, planting should be in full swing across southern and eastern Nebraska. If precipitation becomes more widespread than currently depicted, planting progress would be delayed at least 3 additional days.