This year, Nebraskans saw the season-ending freeze come, on average, a little later than normal, with each of our 65 weather stations recording a 28-degree low by Oct. 28. None, however, broke a record. The state also experienced strong winds that affected farmers and their harvest when it flattened corn. Learn more about how the state's climate affected Nebraskans in this month's edition of the Climate Update from the Nebraska State Climate Office. 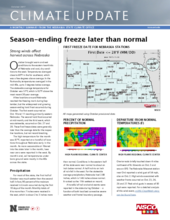